Aloe arborescens Mill. is the correct and accepted scientific name of this species Aloe. It was named and described as such by Philip Miller in the 8th edition of Gardener’s Dictionary in 1768.

The genus, Aloe L., was named and described as such by Carl von Linnaeus in the first volume the first edition of Species Plantarum in 1753.

Plants of the World Online by Kew lists 578 species in the genus (as of 11-11-20 when I am writing this page). Aloe is a member of the Asphodelaceae Family with 40 accepted genera. Those numbers could change as updates are made.

There are several links and growing recommendations at the bottom of the page for further reading. 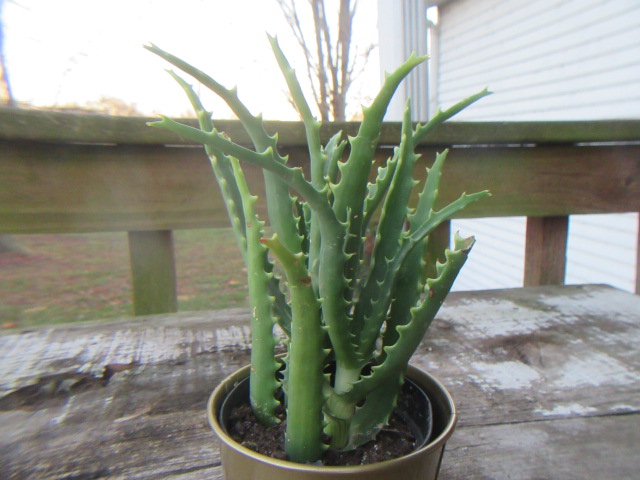 I brought this plant home from Lowe’s on November 10, 2020. There are two plants in the 11 oz. pot. The tallest in the pot measured 6 3/4” tall and the two together were 6 1/2” wide. There was no label stating what species it was so I uploaded photos on the Facebook group called Succulent Infatuation. It wasn’t long before I got an answer. I have several Aloe species and cultivars in my collection but I had not seen an Aloe arborescens locally before. I have seen it online but didn’t pay enough attention to know what it was when I saw it at Lowe’s. All I knew was that it was an Aloe and I didn’t have one like it. So, I brought one of several to choose from home. It was dark outside when I arrived back home, so I took a couple of photos in the kitchen but had to wait until the next day to take more outside in better light. 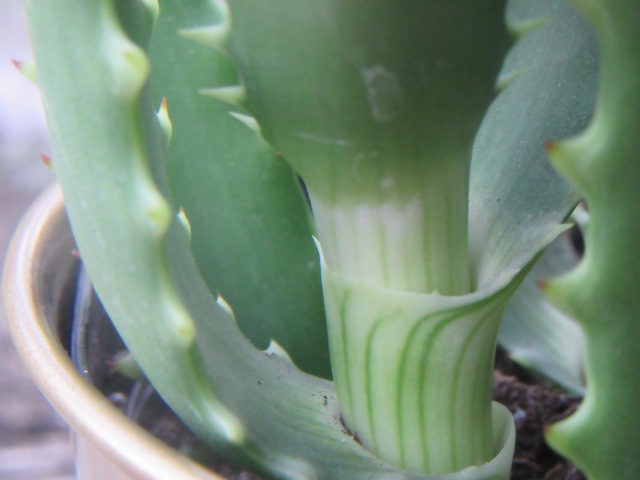 Apparently, Aloe arborescens is a tree or shrub-like cactus that can grow to around 10′ tall. They are highly prized for their non-branching inflorescence with red flowers that attract birds, bees, and butterflies. Information online says they flower in late fall-early winter. That will be interesting to see since I have to keep this plant in a pot in my location in Missouri. I have several miniature Aloe that flower during the fall and winter, but my larger Aloe maculata flower during the summer. So, we shall see if the Aloe arborescens will actually flower in a pot inside or not.

Without a tag or label with the plant, I didn’t realize this species has the potential to get so large. That is something that is good to know before you buy a plant.

Information online says Aloe arborescens has the third-largest distribution of all Aloe and grows in a wide variety of habitats in the wild.

USEFUL INFORMATION:
FAMILY: Asphodelaceae
ORIGIN: South Africa
ZONES: USDA Zones 9b-11 (25-40° F)
SIZE: 3 to 12’
*LIGHT: Full sun to part shade. Best in filtered light as full sun will redden or burn its leaves. I normally keep my Aloe in light to part shade on the front porch.
*SOIL: Aloes have a good root system so can be grown in ordinary, well-draining potting soil. This species grows in a variety of soils in its native habitat. I have to grow this plant in a pot, but should be grown in the ground in warmer climates. I am currently using 50% Miracle Grow Potting Soil and pumice.
*WATER: Water thoroughly when soil is dry and allow to dry out between watering. Aloe like regular watering during the summer months but should be grown fairly dry during the winter.
FLOWERS: Produces red flowers, some cultivars have yellow flowers, on an unbranched inflorescence 2’ above the leaves. Attracts birds, bees, and butterflies. Flowers late fall through early winter.

There is quite a lot online about this species which makes for interesting reading. I will continue to add more photos and information as time goes by. This should be an interesting species to grow and I always like HUGE and interesting plants. SO, we will see how it goes…