The plant family Fabaceae was named and described by John Lindley in An Introduction to the Natural System of Botany in 1836.

In the beginning of time, well, maybe not that far back, Antoine Laurent de Jussieu named the plant family Leguminosae. He described the name in Genera Plantarum in 1789. This family is now a synonym of the family Fabaceae.

As of 12-22-22 when this page was last updated, Plants of World Online lists 773 genera in the plant family Fabaceae. It is commonly known as the legume, pea, or bean family. The number of genera could change as updates are made on POWO.

There has been controversy when it came to deciding which family name to use, the use of subfamilies, etc. I am not going to go into detail about that but you can read about it by clicking the links below.

I have experience with several members of the plant family Fabaceae, mostly wildflowers. You can click on the plant names under the photos to go to their own pages if you like. 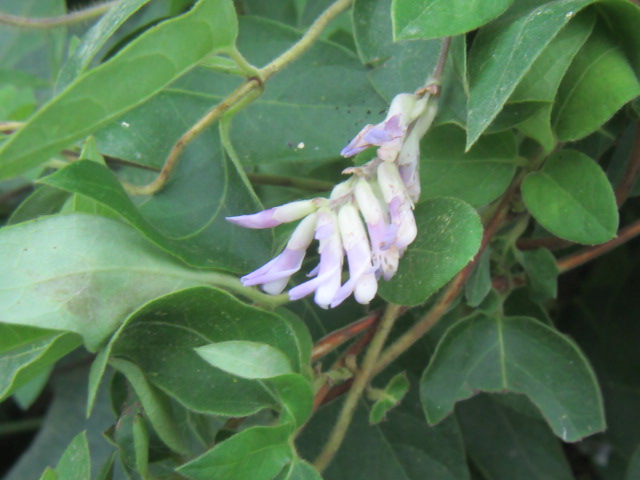 Amphicarpaea bracteata (American Hog Peanut) on 9-2-22, #908-1. Most of the leaves are from Japanese Honeysuckle.

While looking at the vines growing on the fence in the front pasture on September 2 in 2022, I noticed these weird flowers growing on the Japanese Honeysuckle. I thought that was odd so I looked closer and realized it was obviously a species I hadn’t identified before. I took photos and uploaded them to iNaturalist and found out the species is Amphicarpaea bracteata (American Hog Peanut). You never know what oddities you will find…

I spotted my first Baptisia alba var. macrophylla (White False Indigo) on a backroad in 2018. Then, on July 20 in 2021 I spotted another small colony on a different backroad. I didn’t have my camera, so I went back on the 22nd to take photos.

So, I brought this Baptisia australis (Blue Wild Indigo, Blue False Indigo) home from a garden center in Clinton in April in 2017. There were quite a few expensive Baptisia ‘Lunar Eclipse’ blooming but I didn’t want to pay the price. They also had several pots that weren’t blooming for a lot less so I brought one home. The label said it was a ‘Lunar Eclipse’ but when it started flowering in 2018 something was dreadfully wrong. It was NOT a ‘Lunar Eclipse’. I suppose I can’t complain that much since the flowers are still very nice and the plant has definitely been hardy. Still, when you expect one thing and get another it can be frustrating. I told the owner of the garden center (where I also buy some of my garden seed from) and she didn’t have a whole lot to say. Labels get mixed up and when there are no flowers on the plants you just never know what you are bringing home. Anyway, I emailed the company that created ‘Lunar Eclipse’, sent photos, and we can’t put our finger on what cultivar this plant is… It is even possibly a hybrid with another species of Baptisia. Who knows… 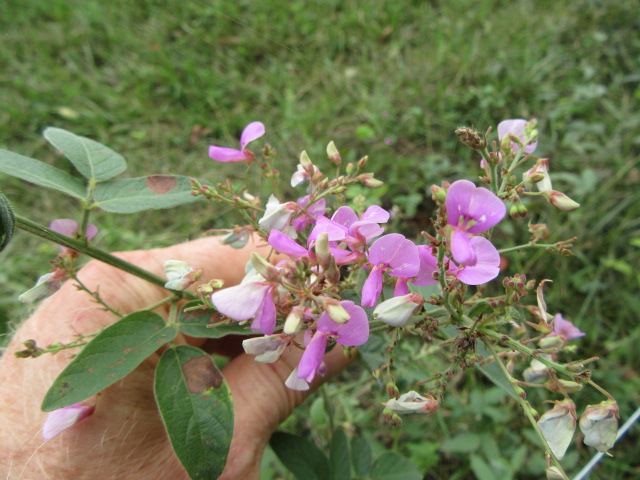 OK, I will also include a photo of the flowers… It could be that both species are present on the farm… Either way, they are a species you definitely love to hate. The Missouri Plants website has information on 7 species native to Missouri, and Plants of the World Online says there are 185 species in North America and other countries combined… GEEZ! 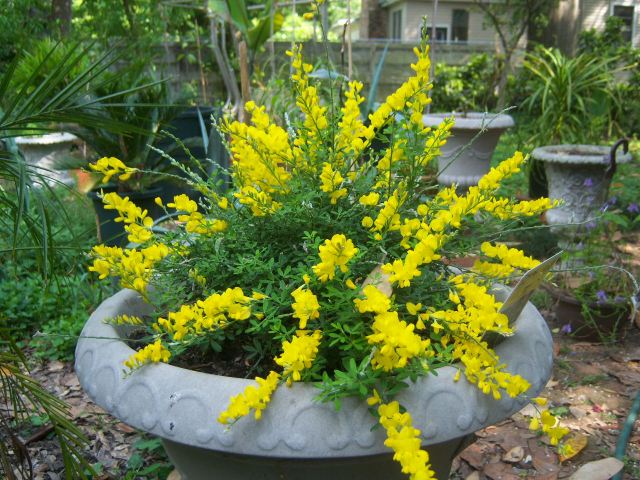 I brought this Genista spachiana (Sweet Broom) home from Lowe’s in 2012 while I was living in Mississippi. The label said it was a Genista racemosa, which is not an official species… I didn’t pay much attention to the label until I came home and put it in the planter. It said this plant could grow to 6′ tall x 6′ wide… 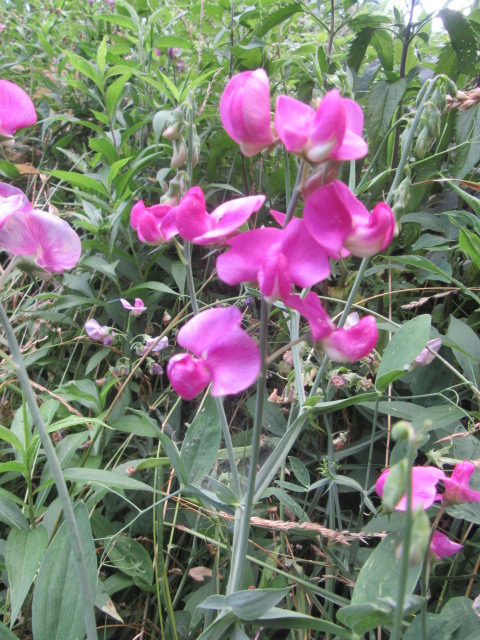 There are A LOT of Lathyrus latifolium (Broad-Leaved Sweet Pea, ETC…) growing in an area north of the chicken house here on the farm. There are 30 (or so) species of Lathyrus native to the United States, but this one was introduced to American gardeners in in the 1700’s and escaped. Now it can be found growing in the wild in almost every state… Common names include Broad-Leaved Sweet Pea, Everlasting Pea, Wild Sweet Pea, Perennial Pea, Perennial Peavine, Everlasting Vetchling, Sweet Pea, and likely others… 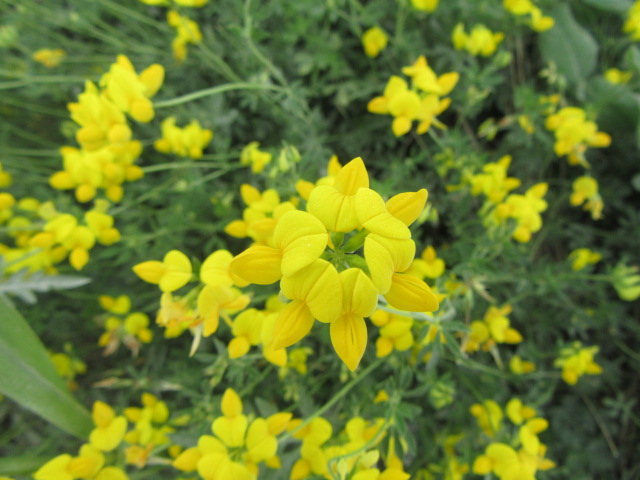 I photographed this Lotus corniculatus (Bird’s Foot Trefoil) on a friend’s farm in 2019. They are growing along the edges of highways and backroads, but 2019 was the first time I saw it in a pasture… It was also growing in the gravel there. 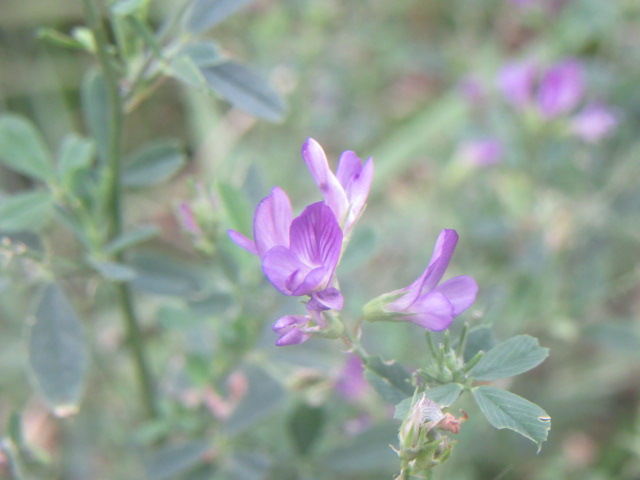 Medicago sativa (Alfalfa) is widely used for hay and has escaped cultivation to be considered an introduced wildflower throughout the United States. I have only seen it once and this plant was growing along the road in front of the pasture. I don’t think this species is seen that often in the wild, at least not around here. 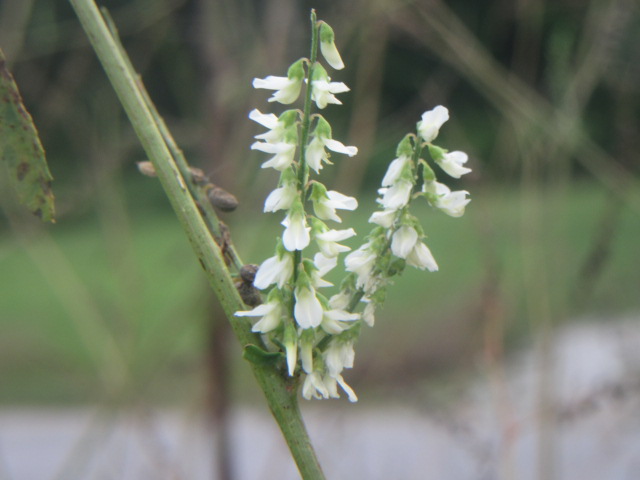 I found a very small colony of Melilotus albus (White Sweet Clover) growing along the fence in the front pasture by the road on August 2 in 2019. By that time, the only thing left were a few flowers… 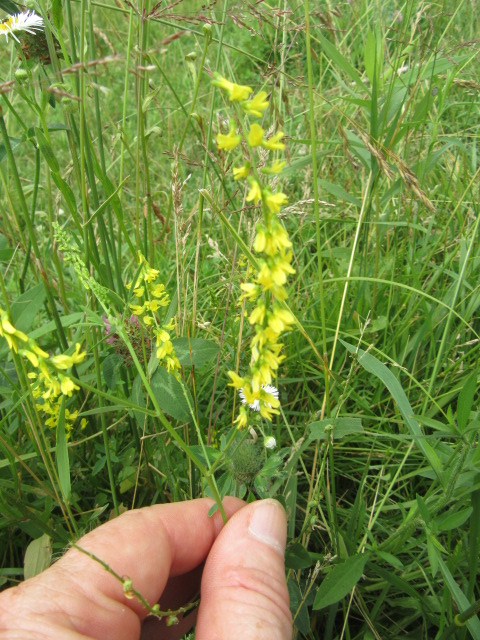 I found a small colony of Melilotus officinalis (Yellow Sweet Clover) while working on a friend’s farm in 2019. Although the species is found throughout Missouri, and all over the country, it was the first time I had ever seen any. Since 2019, I have seen a few along back roads and highways but I don’t always take my camera (and I don’t have a cell phone). 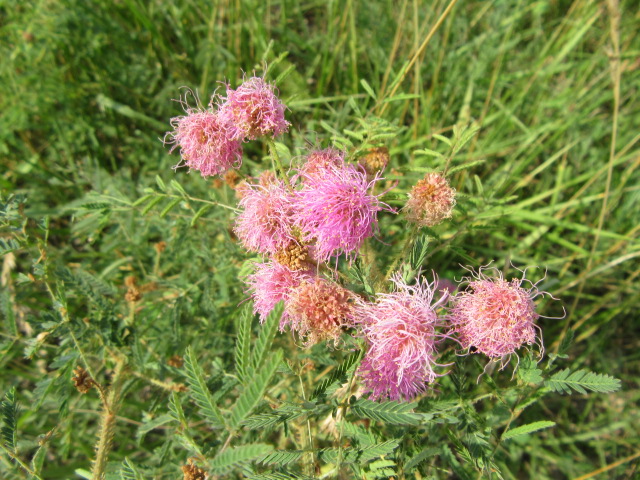 I found a small colony of Mimosa quadrivalis var. nuttallii (Cat’s Claw Briar) at the corner or a back road south of town. I hadn’t seen this species as a kid, so I was happy to find it. I remember as a kid touching their leaves and they would fold up. It’s a really neat plant with very interesting flowers and very thorny stems.

I first noticed this interesting bean growing in the fence row along the front pasture on August 2 in 2019. I took A LOT of photos but the ones of the flowers were blurry so I went back on the next day to try again. I have not seen this bean since…

There are a few others but I don’t have pages for them yet.

That’s all I have for the plant family Fabaceae for now. I’m sure there will be more in the future.