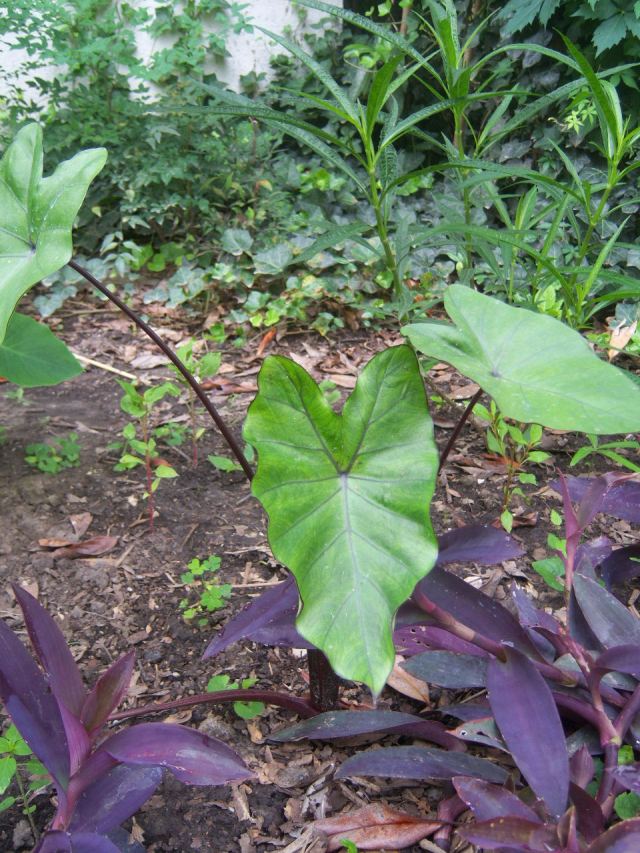 Colocasia fontanesii Schott is the correct and accepted scientific name for the Black Stem Elephant Ear. It was named and described by Heinrich Wilhelm Schott in Oesterreichisches Botanisches Wochenblatt 1854.

The genus, Colocasia Schott, was also named and described by Mr. Schott in Meletemata Botanica in 1832.

Plants of the World Online by Kew lists 11 accepted species in the Colocasia genus (as of when this page was updated on 11-17-21). It is a member of the plant family Araceae with 140 genera. Those numbers could change as updates are made.

Over the years the Black Stem Elephant Ear has been listed as several different species which was a bit confusing.

I bought my Colocasia fontanesii ‘Black Stem’ from Brent & Becky’s in the spring of 2012. I also bought an Alocasia ‘Black Stem’ from Wellspring Gardens. I thought maybe they were the same plant, but sure enough, they were different. The Colocasia leaves pointed downward and the Alocasia pointed upward. Very strange that there is a species of Alocasia and Colocasia that look so much alike except for the direction the leaves point…

I am no aroid expert and I only grew this plant as a companion for one season. I liked its dark stems and dark green leaves and had no problems with it at all. As with many Colocasia, if you buy as small plants grown from tissue culture, it can take some time for them to reach a dramatic size. So, if you buy smaller plants and they don’t get 6-8’ tall by the end of the summer, just be patient. They now have rhizomes that you can store for the winter and they will make larger plants the next season. Unless you live in a zone they can stay out all winter… Just make sure the rhizomes don’t remain too wet over a cool winter outdoors.

You also need to make sure you have your Colocasia growing in an area they like and will do well. Otherwise, your plants will not grow well and attain any size. When I lived in Mississippi, the Colocasia esculenta grew HUGE. Now, in mid-Missouri, I only have room for two that can grow HUGE and the rest remain small because of where I have to grow them.

Keep in mind that Colocasia grow a new rhizome every year on top of the old one. If they are not in a location where they will thrive, the new rhizome could be smaller than the old one.

Someday I will purchase another Colocasia fontanesii since I left the first one behind in Mississippi.

There isn’t any WOW information online right now about Colocasia fontanesii. Most of what is there is out of date and I try and be as current as possible (even though it has been six years since I grew this plant…). I will update the blog pages off and on to make sure the scientific name is still current and maybe there will be new and better information available.