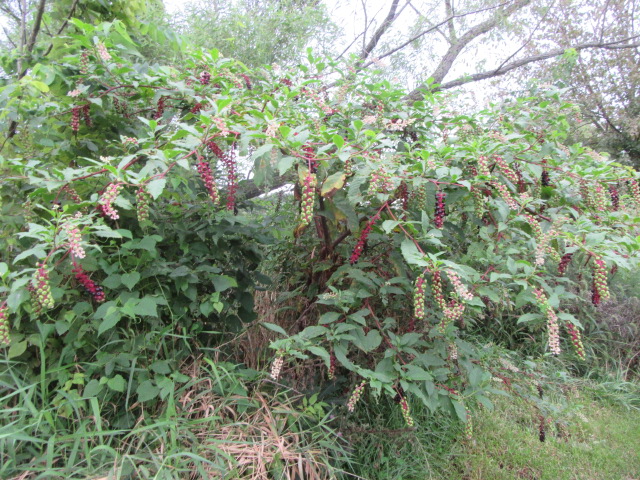 Phytolacca americana L. is the correct and accepted scientific name for this species. It was named and described as such by Carl von Linnaeus in the first volume of the first edition of Species Plantarum in 1753. Phytolacca americana var. rigida (Small) D.B.Caulkins & R.E.Wyatt is the only accepted infraspecific name.

The genus, Phytolacca Tourn. ex L., was described by Carl von Linnaeus in the first volume of the first edition of Species Plantarum in 1753. Supposedly, the genus was first named and described by Joseph Pitton de Tournefort but I didn’t see him mentioned in Mr. Linnaeus’s description (HERE).

As of 4-18-22 when this page was last updated, Plants of the World Online lists 26 species in the Phytolacca genus. It is a member of the plant family Phytolaccaceae with a total of 5 genera. Those numbers could change as updates are made.

Distribution map of Phytolacca americana from Plants of the World Online. Facilitated by the Royal Botanic Gardens, Kew. Published on the Internet; http://www.plantsoftheworldonline.org/. Retrieved on April 11, 2020.

The above distribution map for Phytolacca americana is from Plants of the World Online. Areas in green are where the species is native and purple where it has been introduced. The map on the USDA Plants Database for the United States and Canada is similar and also includes the state of Washington. To view the map for Phytolacca americana var. rigida click HERE. You can zoom in on your state with the USDA maps to get an idea if the species has been documented in your county.

The map on iNaturalist shows where members have made observations. Anyone can join and it is a great website to confirm and share your observations. The maps are continually updated as members post new observations. 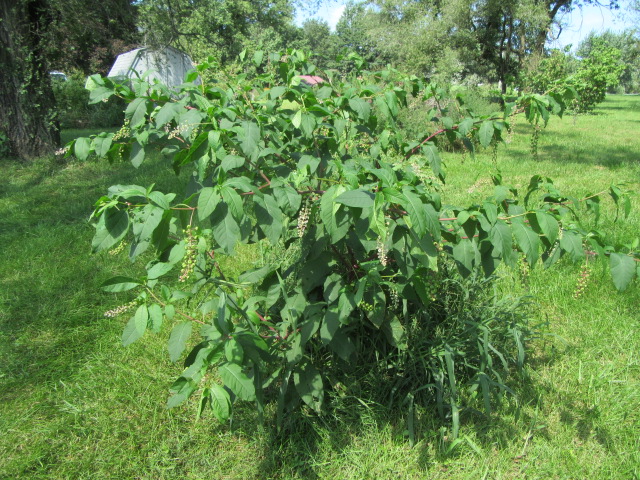 I think everyone I know has probably experienced this plant in one way or another. It is unmistakable mainly because of its purple berries that leave a stain on fingers and clothing. When I see one growing I normally leave it alone because I think they are impressive plants. Even though they produce a large number of berries, they don’t become invasive. I have had one growing along the fence in the garden for many years and there is always just one or two plants. The plant in the photo at the top of the page was growing along the lagoon in 2019 and it was HUGE. Probably the biggest I have ever seen. The one in the above photo came up next to a pile of posts and another one was along the fence about 12 feet away. 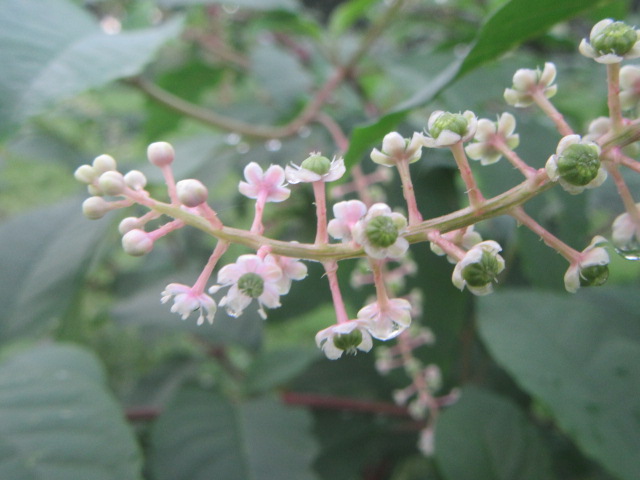 Phytolacca americana is a perennial wildflower native to much of North America and introduced in several other countries. It is unmistakable to identify with its tall tree-like stature, long leaves, and those dark purple berries. Many people consider this plant a common weed but there is more to it than that. I have always liked this plant and normally let it grow where it wants as long as it isn’t in the way. 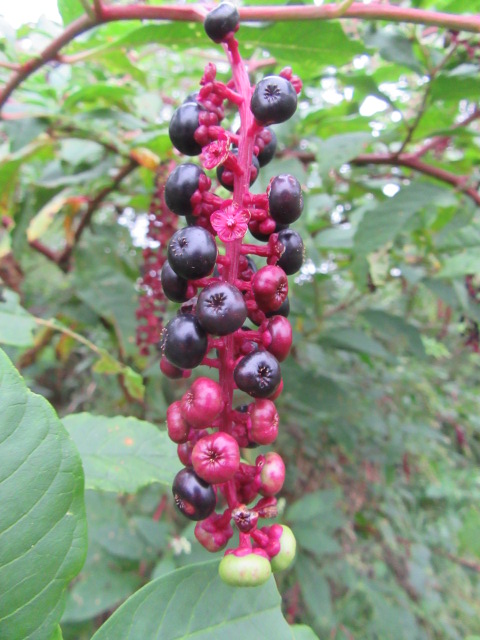 On my farm, there is always one or two along the north side of the garden (always getting involved with the electric fence). For several years one has been in the fence row around the coral. Last year one showed up on the pond bank and there were several very large plants along the north side of the south hayfield. In 2019, the one that had been growing on the bank of the lagoon (top photo) grew to be an enormous plant. It hasn’t returned since. They produce an enormous amount of seeds but thank goodness they don’t all germinate.

The berries are not only eaten by many songbirds, but also Grey Fox, Raccoons, and Opossum. Information suggests birds can become intoxicated from eating fermented fruit. 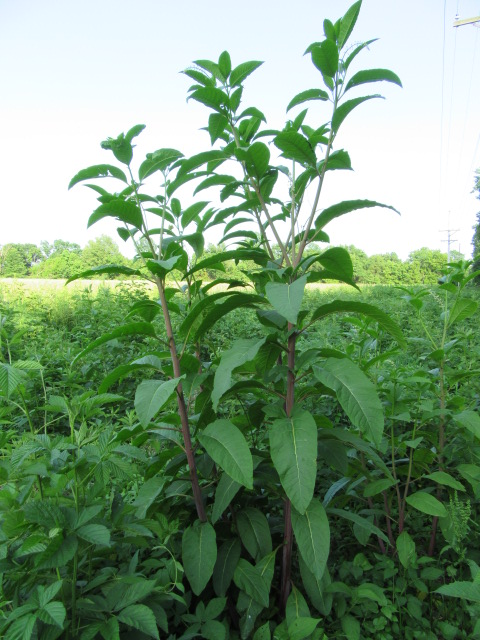 Plants prefer fertile loamy soil, but they have been known to grow in soil with clay and somewhat gravely. You can find them just about anywhere the seeds decide to germinate. 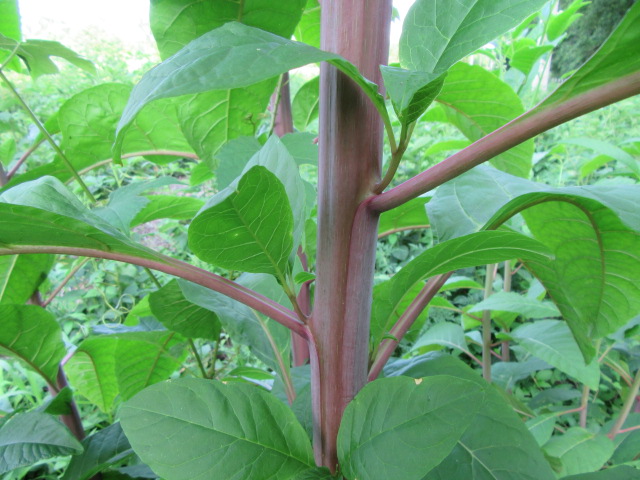 The stems of Phytolacca americana are smooth, hairless (glabrous), well-branched, and can be green to reddish. I think they are green at first then turn red. The stem forks (dichotomous) toward the top and many side branches emerge from the axil of the leaves growing along the main stem.

Although new shoots and young leaves are edible, it is said you have to boil them, rinse them, and boil them again. However, all parts of this plant are toxic and even after cooking, some people have still been poisoned. More about its toxicity toward the bottom of the page. 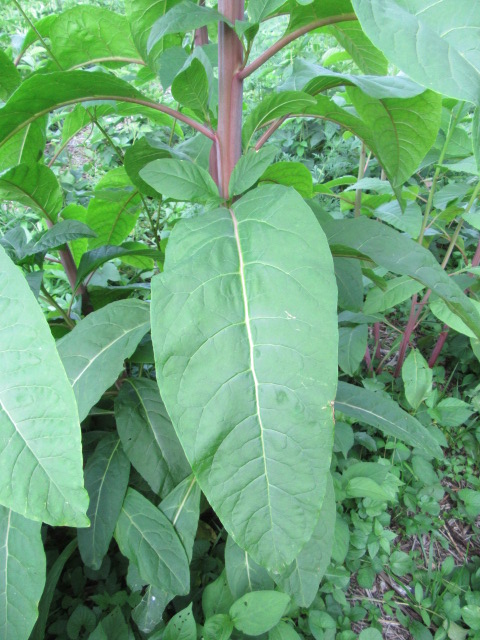 The leaves grow in an alternate manner along the stems and can be broadly oblong-lanceolate, elliptic to ovate in shape. They are smooth with prominent veins and can have somewhat wavy edges. The leaves grow up to 10” long and 4” wide and their petioles (leaf stalks) are 1/2-1” long. 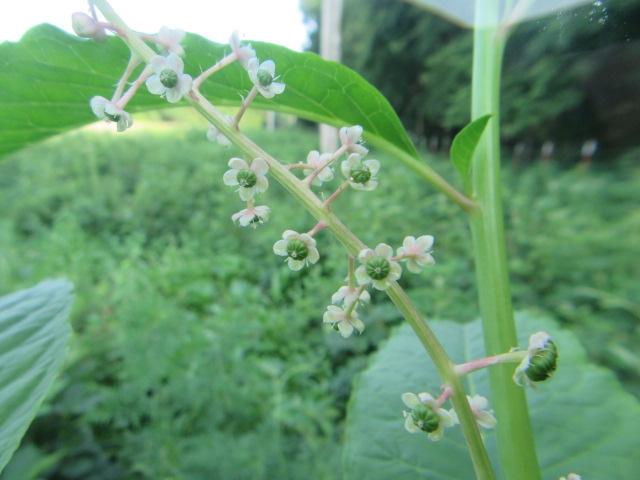 It seems most of the stems terminate with 3-6” long racemes of flowers. There will also be multiple “auxiliary” racemes on fairly long pedicels along the branches.  The pedicels (flower stems) have weird small bracts but you have to get a magnifying glass to see them. The pedicels start out greenish and turn red during fruiting.

The weird flowers are about 1/4” across and consist of a calyx with 5 sepals. No petals. The sepals are usually white but are sometimes pinkish-tinged. There are 10 white stamens with anthers that connect in the center. There are filaments in there somewhere… The flowers have a depressed-globose green ovary in the center with 10 carpels that fold together to form the fruit. Each carpel has 1 ovule that becomes the seed. Hmmm… I think I need to dissect a flower and get a photo. 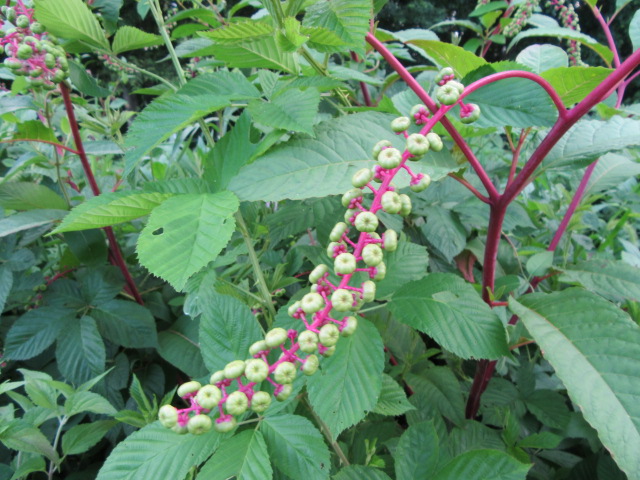 Quite a color combination… Pink and green… As you can see, the peduncles turn pinkish when the plants are in the fruiting stage. 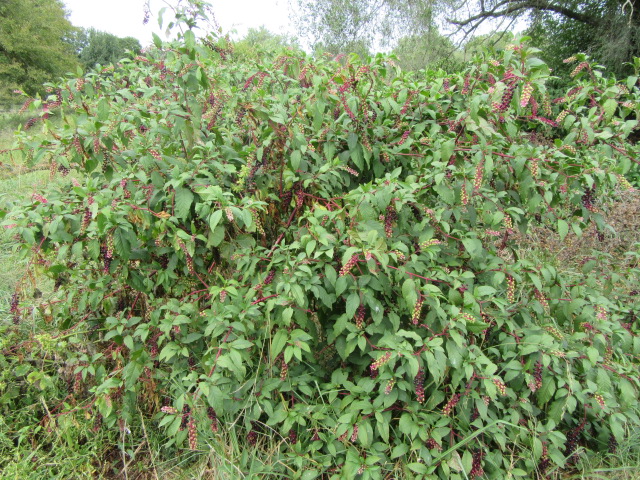 The plant in the above photo was growing on the south side of the main pond in the front pasture. It was a big one! 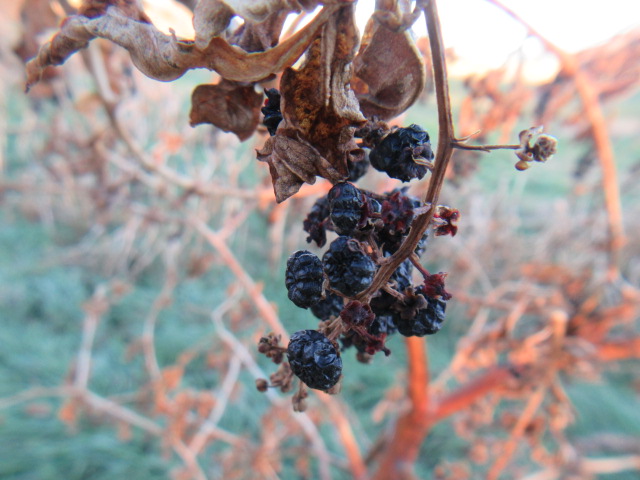 The fruit is a deep blackish-purple in color and rather shiny. Of course, there are 10 seeds per fruit. The juice of the fruit has been used as a dye… Just think how many seeds are produced from a single large plant… The fruit really shrivels up but they are still fairly solid. 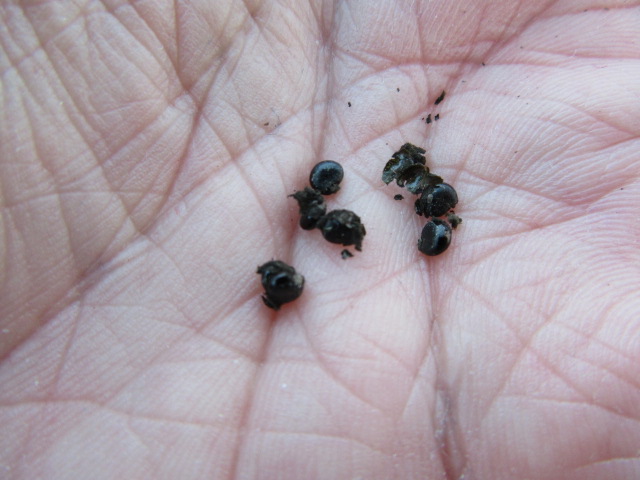 Well, I guess I need to break the fruit open a little more, huh? At least the juice had dried up. 🙂 There are supposed to be 10 seeds per fruit.

If you handle this plant, you should probably wear gloves or at least wash your hands thoroughly…

I have enjoyed photographing and learning about the many wildflowers growing on the farm and other areas. My farm is in Windsor, Missouri in Pettis County (Henry County is across the street and Benton and Johnson aren’t far away). I have grown over 500 different plants and identified over 200 wildflowers (most have pages listed on the right side of the page. I am not an expert, botanist, or horticulturalist. I just like growing, photographing and writing about my experience. I rely on several websites for ID and a horticulturalist I contact if I cannot figure them out. Wildflowers can be somewhat variable from location to location, so sometimes it gets a bit confusing. If you see I have made an error, please let me know so I can correct what I have written.

I hope you found this page useful and be sure to check the links below for more information. They were written by experts and provide much more information. Some sites may not be up-to-date but they are always a work in progress. If you can, I would appreciate it if you would click on the “Like” below and leave a comment. It helps us bloggers stay motivated. You can also send an email to me at thebelmontrooster@yahoo.com. I would enjoy hearing from you especially if you notice something is a bit whacky