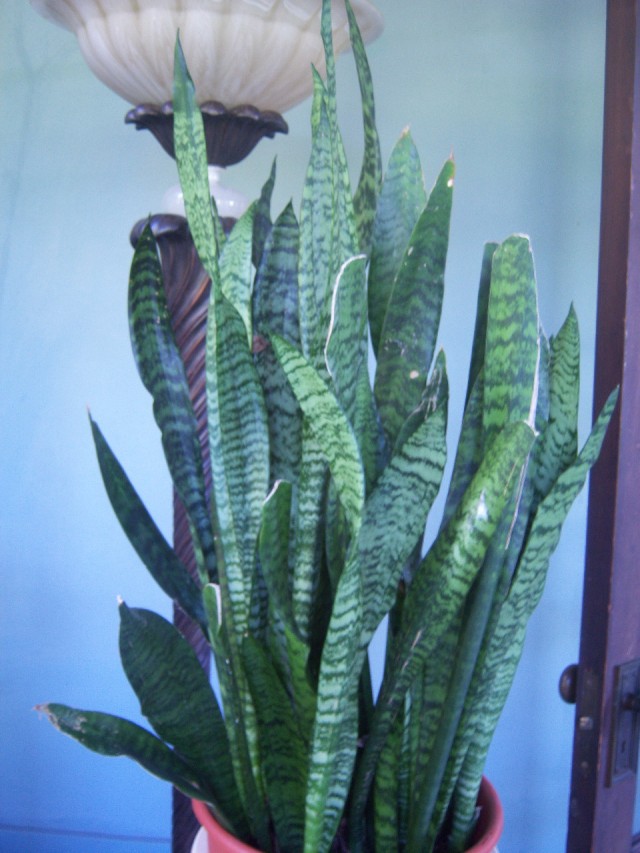 After so long as knowing this plant as Sansevieria, due to testing, the genus name has changed…

Sansevieria trifasciata var. laurentii is the variegated type, the one with the yellow margin…

Sansevieria trifasciata var. laurentii (De Wild.) N.E.Br. is an unresolved infraspecific name. It was described by Nicholas Edward Brown in the Bulletin of Miscellaneous Information (Royal Botanic garden-Kew) in 1915. It has previously been described as Sansevieria laurentii by Émile Auguste Joseph De Wildeman in Revue des Cultures Coloniales in 1904. Modern taxonomy (APG III System) doesn’t recognize many infraspecific names. Now that the genus name has changed…

Hmmm… When names change it affects a lot of things. 🙂

The genus, Dracaena Vand. ex L., was described as such by Carl von Linnaeus in Mantissa Plantarum in 1767. He gave credit to Domingo (Domingos, Domenico) Vandelli for first naming and describing the genus.

Plants of the World Online lists 190 species in the Dracaena genus (as of 11-28-20 when I am updating this page). It a member of the Asparagaceae Family with 118 genera. Those numbers could change as updates are made. Sanseveria was formerly in the Dracaenaceae Family.

Plants of the World Online previously listed 73 accepted genera in the Sansevieria genus. The results of phylogenetic (DNA) testing proved Sanseveria and Draceana should be in the same genus, genetically. Since the genus Dracaena was named before Sansevieria, the species in Sansevieria were moved to Dracaena. Many species of both genera had been moved back and forth between the two a multiple of times throughout the years anyway.

There are several links at the bottom of the page for further reading. 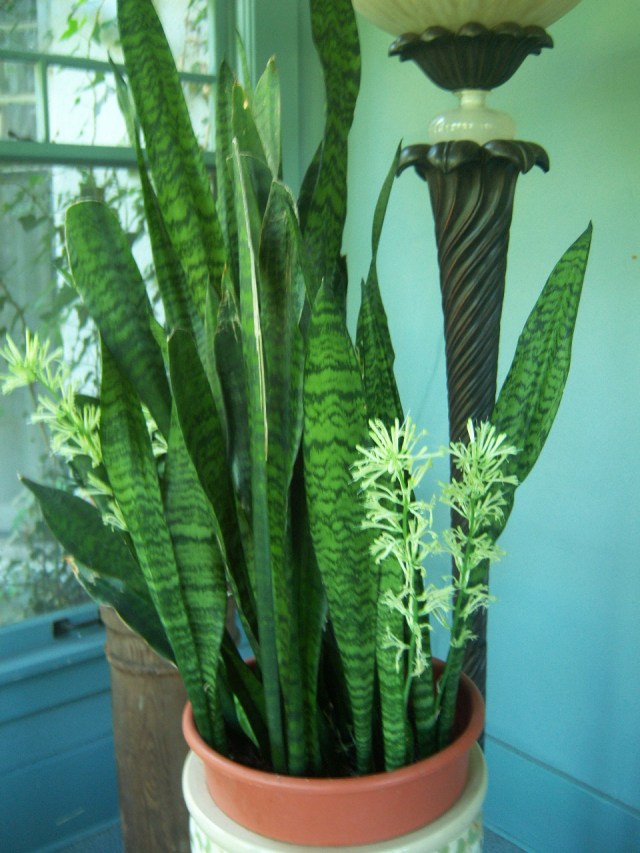 In June 2012 I was pleasantly surprised with flowers. Some information online says they rarely flower, but this is the second experience I have had. I remember when I was a kid my parents has a HUGE Mother-In-Law’s Tongue in the living room. One day we noticed this incredibly sweet smell coming from somewhere. We couldn’t figure it out for days. Then we noticed the Mother-In-Law’s Tongue blooming. The plant was very old at the time and lived for many years afterward and never flowered before that and I don’t remember it ever doing it again. I wonder what happened to that plant? Well, that was a very long time ago…

USEFUL INFORMATION:
Family: Asparagaceae
Origin: The species is native to west-central Africa
Zones: USDA Zones 10a-11 (30-40° F)
Size: Up to 26 to 48” tall
Light: Light to part shade
Soil: Well-drained
Water: Water thoroughly when the soil is dry. DO NOT overwater and DO NOT allow the pot to sit in water.

Dracaena trifasciata do best in moderately bright or filtered light such as in front of a north-facing window. They tolerate low light, but brighter light will bring out the color better. Too much light can cause their leaf edges to yellow.

Their soil should be allowed to dry out completely before watering again. They need to be watered deeply and thoroughly but water remaining in the saucer should be discarded because their pots should never be allowed to sit in water for any period of time. They will not tolerate soggy soil and their roots will rot easily if the soil remains too wet for any period of time.

They are light feeders and too much fertilizer will make their leaves fall over. There are several recommendations about fertilizing and a few of the links below will give you some ideas. I never fertilized mine and many people don’t.

Dracaena trifasciata likes a crowded root system. I read before that they are best grown in clay pots and should not be repotted until their roots break the pot…

Propagation by division and leaf cuttings is pretty simple. Cuttings should be about 4” (10 cm.) long and placed in moist sand. Umm… Be aware the offspring of variegated cultivars will lack the variegated margin if propagated by leaf cuttings.

The NASA Clean Air Study found Dracaena trifasciata has air purification qualities, removing 4 of the 5 main toxins including carbon dioxide during the night.

After I sold the mansion in Leland, Mississippi in 2013, dad asked me to move back to the family farm in mid-Missouri. I gave up around 200 pots of plants but still brought many with me including the Dracaena trifasciata. It was still in the pot only half full of soil. Well, over the 2013-2014 winter I decided I was going to change that. It didn’t appreciate it and started going downhill after that. Next thing I knew, it was beyond resurrection.

Someday I will definitely bring home another one, probably the variegated variety next time. They are usually available at Lowe’s and Wal-Mart and there are many online sources. There are several other cultivars available.

Dracaena trifasciata are easy to grow and there are only a few basic rules to follow. 1) Part shade or in a north-facing window is best. 2) Do not overwater. Water ONLY when the soil is dry, then thoroughly water. 3) DO NOT over water and never allow the pot to sit in water. And don’t forget, if you propagate the yellow-edged variety by leaf cuttings, their offspring WILL NOT be variegated any longer.

I hope you enjoyed this page and maybe found it useful. If you have any comments, questions, or suggestions, I would like to hear from you. Please click on “like” if you visited this page. It helps us bloggers stay motivated. 🙂 You can check out the links below for further reading. The links take you directly to the genus and species of this plant. Most websites have not updated the name change.