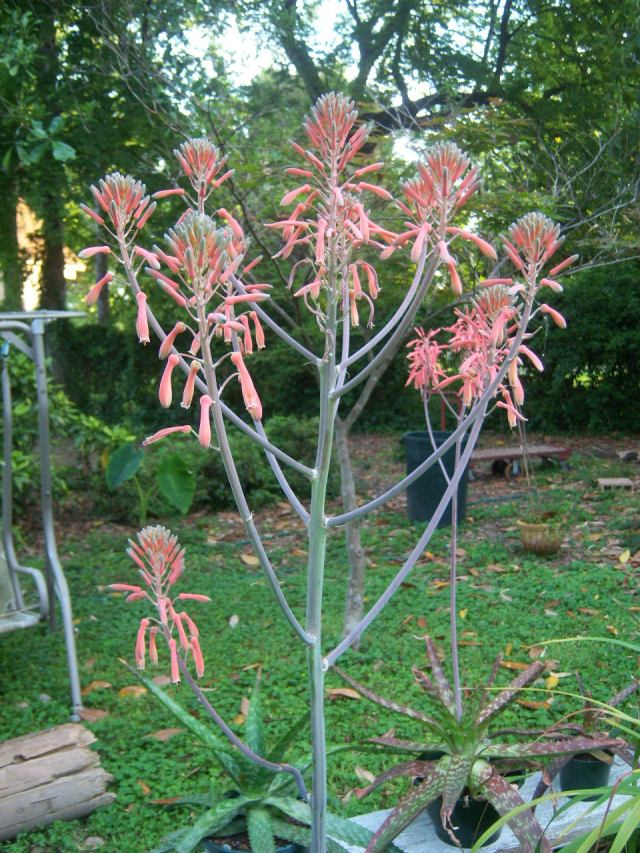 AWESOME Aloe maculata ‘Kyle’s Grandma’ flowers! Notice the clusters of flowers ARE NOT flat-topped. This photo was taken on 5-1-12, #88-1.

The plant family Asphodelaceae was named and described by Antoine Laurent de Jussieu in Genera Plantarum in 1789.

Plants of the World Online lists 40 accepted genera in the plant family Asphodelaceae (as of 10/15/21 when I updated this page)). Many genera were formerly placed in other families. It is all weird to me because the Asphodelaceae Family was named in 1789 but information suggests the name Xanthorrhoeaceae was used for the family until the reclassification by the APG IV system in 2016. The Xanthorrhoeaceae Family was named in 1829. Then there was the Cronquist system in 1981 which had its own difficulties. I think the new system uses facts based on testing plus they make a few compromises to make others happy.

Many genera were in other families since I first started blogging in 2009… For example, the Aloe (etc.) were in the Aloaceae Family which was named in 1802… It is quite interesting to do name research and find out how many genera have been moved in and out of multiple families over the years… Possibly they were members of several families at the same time depending on what books or websites you were reading and ther sources of information. Even though it is QUITE confusing, getting the genus and species names and what families they belong to settled once and for all will be a good thing. But, not everyone will accept the changes.   Polygenetic testing, or whatever you call it, has accomplished a lot.

Well, it’s complicated. The link below to the article in Wikipedia explains it all in great detail. Just be prepared to get a headache.

For further information on this family of plants, please click on the links below. They take you directly to the page for the family. 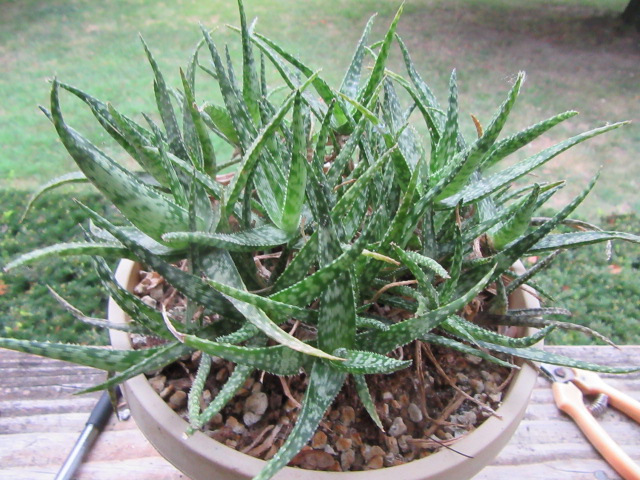 Since 2009, I have grown 12 different Aloe species and hybrids. Most have been easy to get along with, but a few have had their ups and downs. The above photo is Aloe ‘Lizard Lips’ which was the first hybrid I brought home in 2009. The Aloe page has photos of all of them and you can click on the plant’s names to redirect you to their own pages.

I brought the Aloiampelos ciliaris (Climbing Aloe) home in 2012 and unfortunately gave it up in 2014. The name was changed from Aloe ciliaris due to testing. As of 10-15-21, Plants of the World Online lists 7 species in the Ciliaris genus.

I brought this Aristaloe aristata (Lace Aloe) home from Wal-Mart in March 2018 and it did great until 2020. First, it didn’t like the pot I transferred it to then over the winter it became infested with mealy bugs. After repeated spraying, washing, and repotting, it ultimately died. Hopefully, someday I will find another plant locally. This species used to be Aloe aristata but as a result of testing it was put in a genus of its own in 2014.

I brought this Gasteria home from Wal-Mart in March 2013. It was my first Gasteria and I was very glad I found it. It was unlabeled but I knew it was a Gasteria. The problem is, I have never quite figured out out the species or cultivar name. It could be a hybrid that was never named but I do think it is from Gasteria obliqua. It has been a great plant and had grown to 5 1/2″ tall by 8-17-21 when I measured it last.

I brought this Gasteria ‘Little Warty’ home from a local greenhouse in May of 2019. It has done great and had grown to 6″ tall x 5 3/4″ wide when the above photo was taken on 8-17-21. It has been a great, undemanding plant for sure!

I receieved this Haworthiopsis attenuata ‘Super White’ (Zebra Plant) from Nico Britsch of Succulent Market in August 2020. It has done very well and had grown to 3 3/4″ tall x 5 1/2″ wide by 8-17-21 when the above photo was taken. The species name was Haworthia attenuata until 2015 when Gordon Douglas Rowley changed the name… It is often confused with Haworthiopsis fasciata with tubercles only on the underside of the leaves. It has been a great plant so far.

I brought this Haworthiopsis limifolia (Fairy Washboard) home from a local greenhouse in May 2019 at the same time as the Gasteria ‘Little Warty’. It is a great plant and grew to 4 1/2″ tall x 5 3/4″ wide by 8-17-21 when the above photo was taken.

I brought three of these Kniphofia uvaria (Red Hot Poker) home in 2017. I had hoped they would flower but they didn’t and they didn’t survive the winter. Hopefully, someday I will try them again. 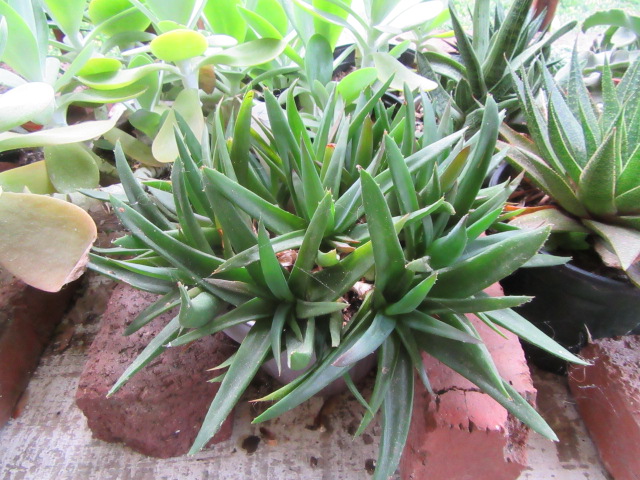 The x Alworthia ‘Black Gem’ is another plant I brought home from Wildwood Greenhouse in May 0f 2019. I really like its smooth, dark green leaves. It has grown quite a bit and measured 5 1/2″ tall x 11 1/2″ wide when the above photo was taken on 8-17-21. It is a cross between Aloe speciosa and Haworthia cymbiformis.

I brought this x Gasteraloe ‘Green Gold’ home from Wal-Mart in August 2012 when I lived in Mississippi. It did great but unfortunately was one of the plants I gave up in 2014… I haven’t found one locally since.

This x Gasteraloe ‘Twilight Zone’ was given to me by the owner of Pleasant Acres Greenhouse in Leland, Mississippi in May 2012 when I lived there. It was labeled Aloe x ‘Twilight Zone’, but the breeder said it was an x ‘Gasteraloe’. He said it reminded him of the introduction of the TV series, The Twilight Zone, so he gave it that name. It was a great plant but it was also one I gave up in 2014. Hopefully, someday I will find another one locally to bring home.

I brought this x Gasteraloe ‘White Wings’ home in 2016 from the same place as x Gasteraloe ‘Flow’. This plant was weird the way its leaves looked but I suppose it was just its characteristic. This plant fizzled out not long after I brought it home for some reason…

I am finished with this page for the moment. I will add more as I find more to bring home. 🙂

If you have any comments, questions, suggestions, or see I have made an error, please leave a comment or email me at thebelmontrooster@yahoo.com. I really appreciate “likes” and comments. It helps us bloggers stay motivated. 🙂