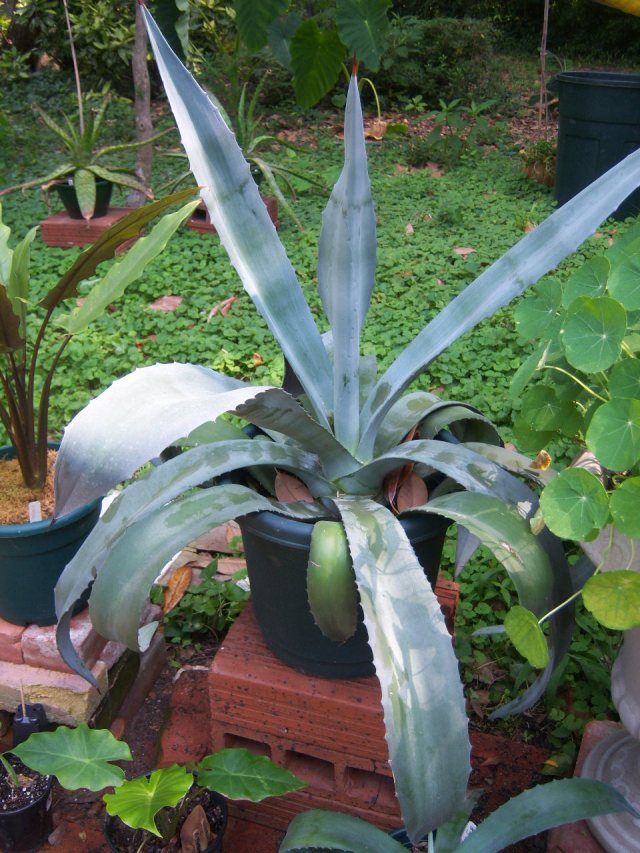 Agave americana L. is the accepted scientific name for this species of Agave. The genus and species were named and described as such by Carl von Linnaeus in Species Plantarum in 1753.

As of 11-14-22 when this page was last updated, Plants of the World Online lists 283 species of Agave. It is a member of the plant family Asparagaceae with 120 genera. Those numbers could change as updates are made on POWO. 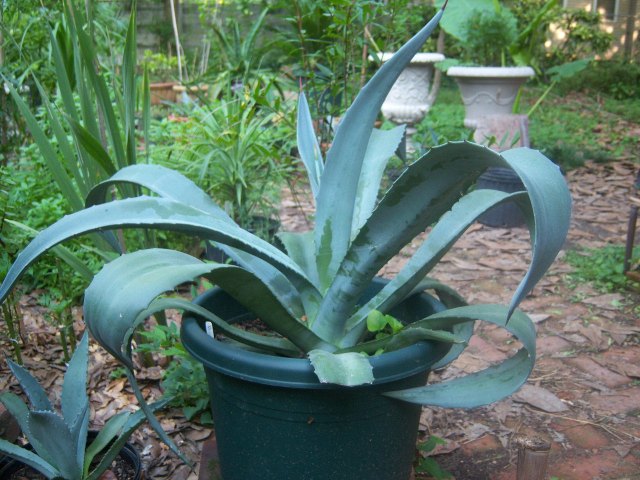 Information on the internet just made it more confusing because some were incorrect. I sent photos to Tony Avent of Plant Delights Nursery and Cheryl of Highland Succulents. Both of them told me the plant from Ebay was an Agave americana subsp. protoamericana the one from K&K was Agave americana. 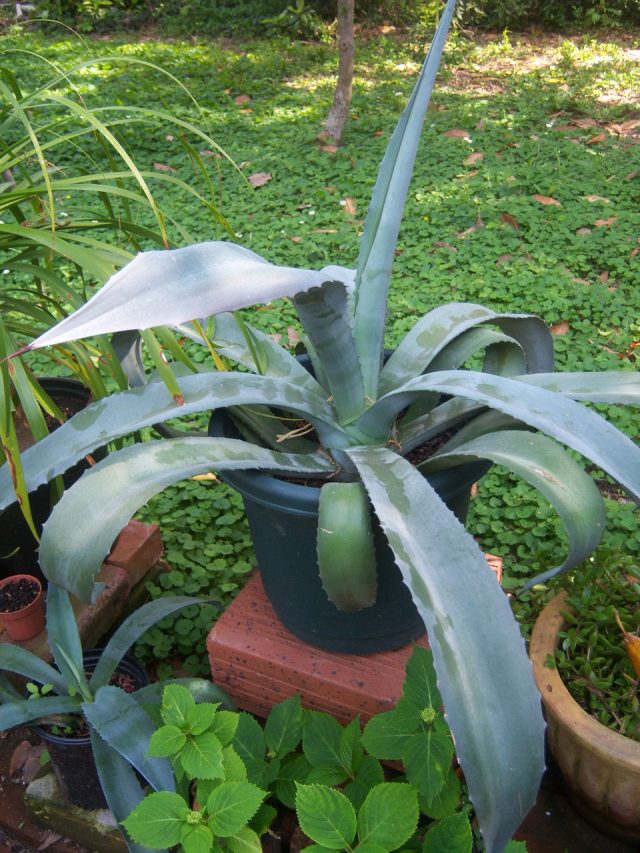 We made it through our first winter together with flying colors and the Agave americana was glad to be back out in the backyard at the mansion.

USEFUL INFORMATION:
Common Name: Century Plant
Family Name: Asparagaceae (formerly in Agavaceae)
Origin: Mexico and southwest Unites States (Arizona, New Mexico, and Texas
Zones: USDA Zones 8a-11 (10-40 degrees F.)
Size: 3-6’ tall x 6-10’ wide
Light: Full sun to part shade.
*Soil: Prefers a very well-drained soil somewhat on the dry side.
Water: Average. Mine get regular water during the summer but I seldom water while indoors over the winter.
Propagation: Can be grown from seed. They produce many offsets so you will have a good supply to pass along.

*Agave species are very easy to grow in the ground where they are cold hardy and in pots where they are not. There are a lot of potting soil recipes online and many people develop their own with experience and what is readily available. Read the ingredients on the bag and always start with a base of a reliable brand name potting soil. I always use either Miracle Grow or Schultz Potting soil because I can buy it in large bags. They also offer cactus soil in smaller bags with similar ingredients. I am not sure what all I put in the potting soil when I lived in Mississippi, but here I used 2 parts potting soil with 1 part additional perlite and 1 part chicken grit. After reading that cactus and succulent enthusiasts were recommending pumice in place of perlite and grit, I decided to try it. So, in late in 2018 I purchased a bag of pumice online from General Pumice. I have been using a combination of about 50% potting soil and 50% pumice with favorable results. 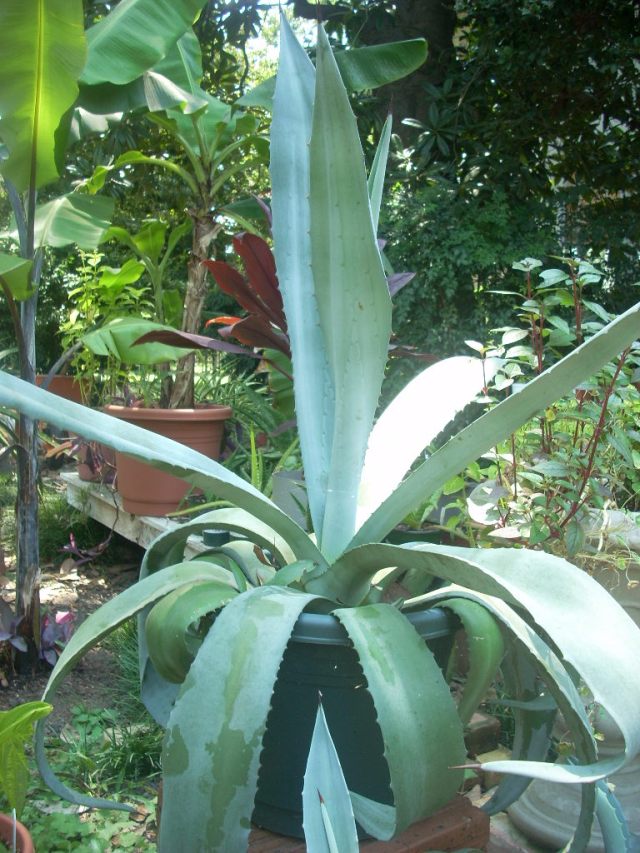 Although Agave americana is a native of Arizona, New Mexico, and Texas, they are grown worldwide as an ornamental. That has led to them becoming naturalized in many other countries. There are four accepted subspecies, that I know of, and several popular cultivars. A few have received the Royal Horticultural Society’s Award of Garden Merit. 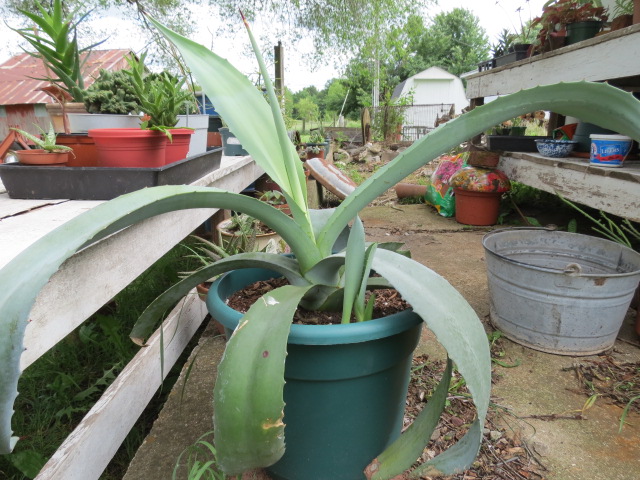 When I moved back to the family farm in mid-Missouri in February 2013, I had to give up most of my plants, including the largest Agave. I did bring one of its pups, though.

The name Century Plant is a little misleading. They typically live 10-30 years and flower only once at the end of their life. The plant dies after flowering, but by then, it will have produced MANY pups. Plants grown indoors rarely flower.

The Agave americana did very well in mid-Missouri although it is in a pot because it won’t survive the cold winters here. I decided I would need to put it in a larger pot the next spring.

As strange as it may sound, the Agave and may of the other succulents didn’t mind being in the basement over the winter for a few months.

Back outside for the summer once again. I did put it in a bigger pot and remove the offsets. Now they will all have room to grow more.

Sad to say, but I gave up most of my plants in the summer of 2014. Now I am starting over and hopefully, someday I will find another Agave americana.

I hope you found my tribute to the Agave americana useful. If you have any questions, comments, or suggestions, I would like to hear from you.