The genus, Callirhoe Nutt., was named and described by Thomas Nuttall in the Journal of the Academy of Natural Sciences of Philadelphia in 1822.

As of 1-5-22 when this page was last updated, Plants of the World Online by Kew lists 9 species in the Callirhoe genus. It is a member of the plant family Malvaceae with 249 genera. Those numbers could change as updates are made on POWO. 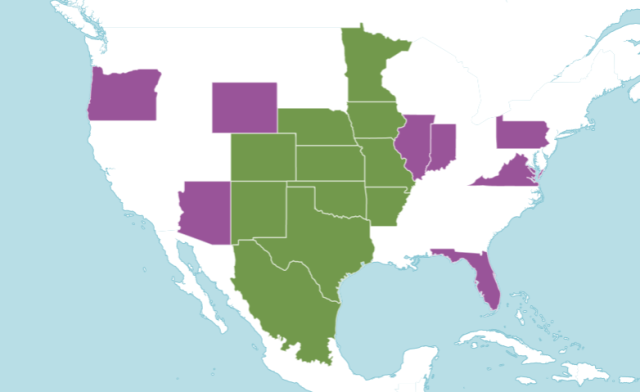 Distribution map of Callirhoe involucrata from Plants of the World Online. Facilitated by the Royal Botanic Gardens, Kew. Published on the Internet; http://www.plantsoftheworldonline.org/. Retrieved on October 5, 2021.

The above distribution map for Callirhoe involucrata is from Plants of the World Online. Areas in green are where the species is native and purple where it has been introduced. The map on the USDA Plants Database for North America (above Mexico) includes a few more states and says the species is native in all. Some websites from a few states say the species is introduced and not native. No map is perfect but they do give a general idea. You can click on the links to view the maps for the subordinate taxon. Callirhoe involucrata var. tenuissima is from Mexico.

THERE ARE SEVERAL LINKS BELOW FOR FURTHER READING AND TO HELP WITH A BETTER POSITIVE ID. 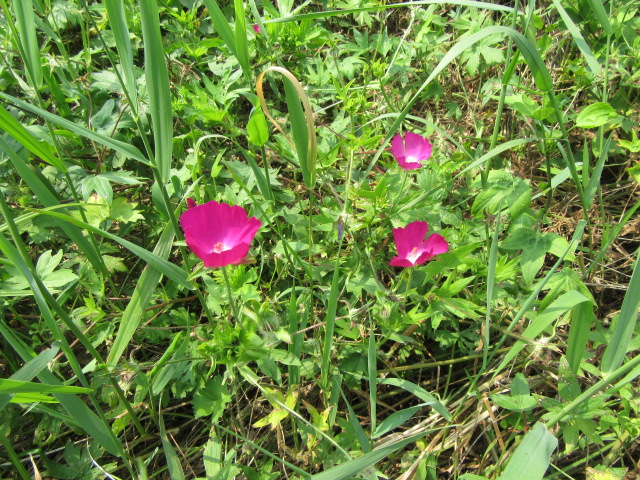 I found a good-sized colony of Callirhoe involucrata growing along the road that runs along the south side of Farrington Park in Windsor on July 22 in 2021. I had not seen them anywhere else before.

Callirhoe involucrata is a perennial wildflower that grows from a central taproot. They are found in prairies, pastures, along roadsides, railroads, open woods, and abandon fields. They grow in a wide variety of soil types in full sun. Plants die after mid-summer.

Sprawling plants produce angular stems covered with white hairs and can be light green to reddish-purple. 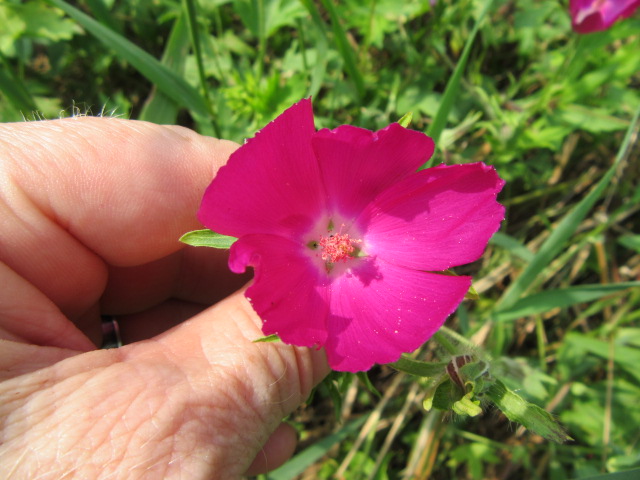 The five-petaled wine-red (magenta) flowers are normally whitish toward the center. Well, there is A LOT more to the flowers than that, but I am saving that information for when I get better close-ups. You can read the technical terminology by clicking on some of the links at the bottom of the page…

The interesting leaves are somewhat hard to explain…The palmate leaves grow in an alternate pattern along the stems and are up to 4” long and wide. The leaves are palmately lobed and sometimes the lobes have lobes. The leaves have long, hairy petioles with a pair of green stipules at the base. Hairs on the leaves and petioles are either simple or 4-rayed…

It was a very sunny day when I took the photos which doesn’t always work out. I will take more photos in 2022 and hopefully, I can get some good close-ups so I can write better descriptions. You know what they say… A photo is worth a thousand words. 🙂

There are several sources online for this species.