This Hosta was introduced by Roy Herold in 1995, although I think it was discovered in 1988. It was registered by Kevin Walek on Mr. Herold’s behalf in 2009. It is regarded as one of the best red-stemmed Hosta available. 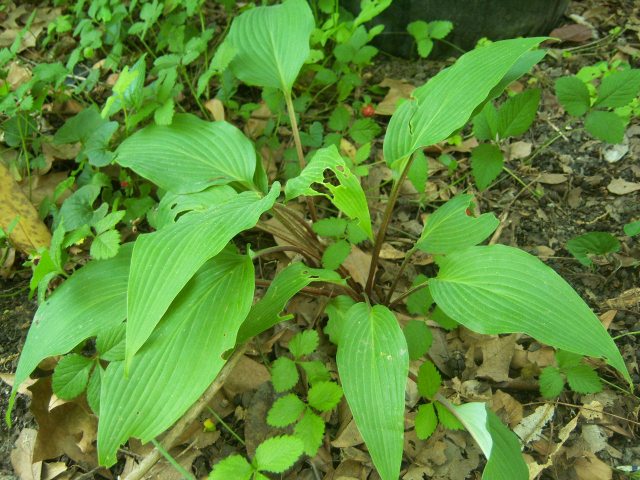 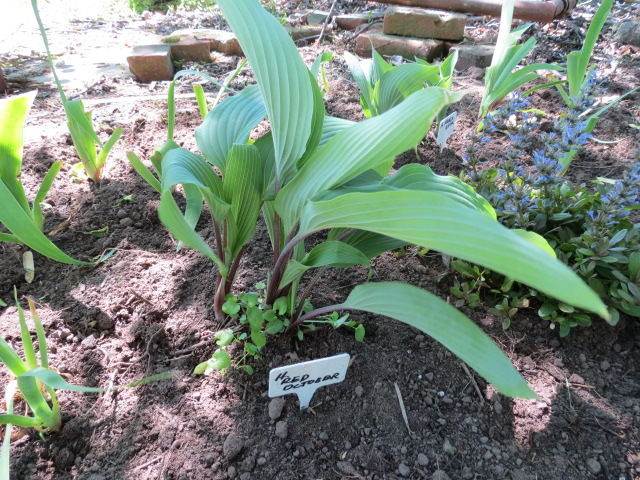 I dug a new shade bed where I had flower beds back in the early 1980’s. Back then this was a sunny area now it has three large trees. A perfect spot for Hosta! 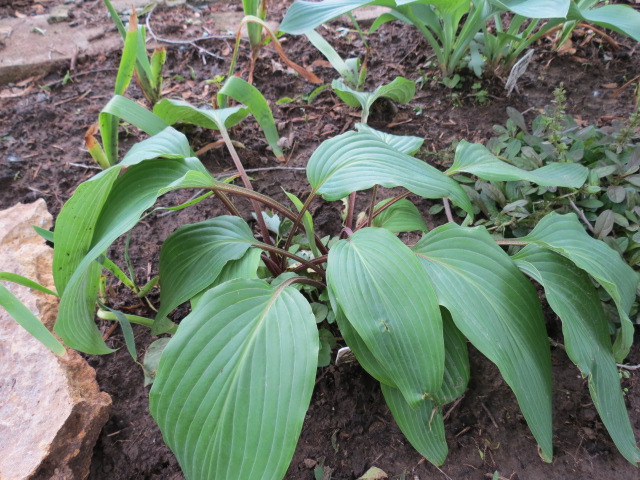 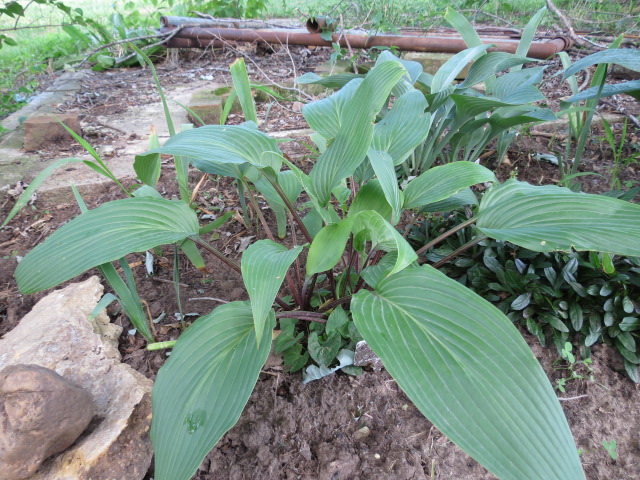 I have had this Hosta since 2009, so there are a lot of photos. More photos than I have words for. 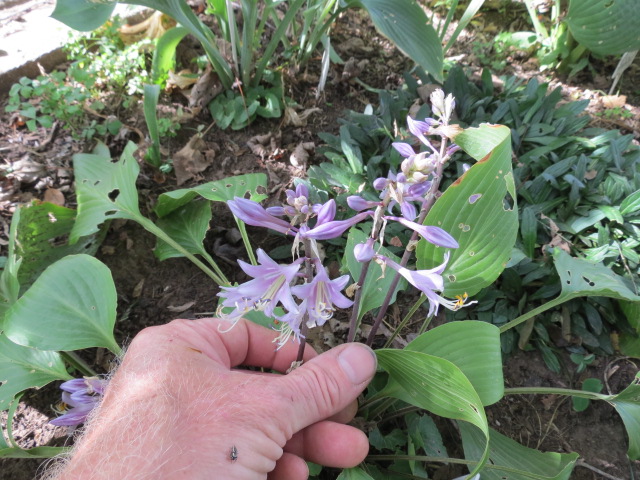 None of my Hosta flowered in Mississippi, so I was delighted when they started in Missouri. Although the name seems to suggest they flower in October, mine started in September. Wonder why they didn’t name it ‘Red September’? 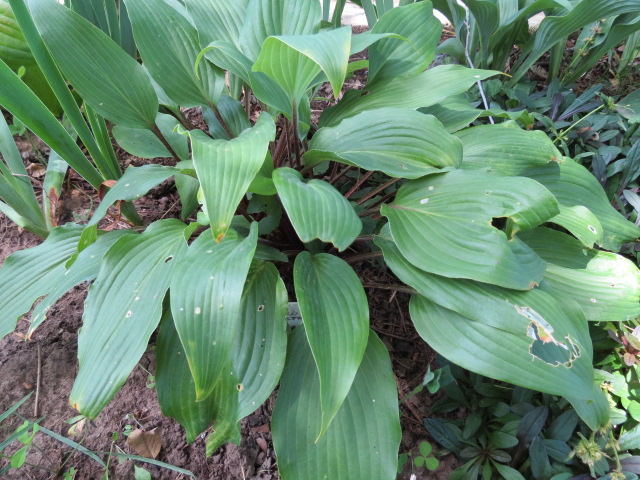 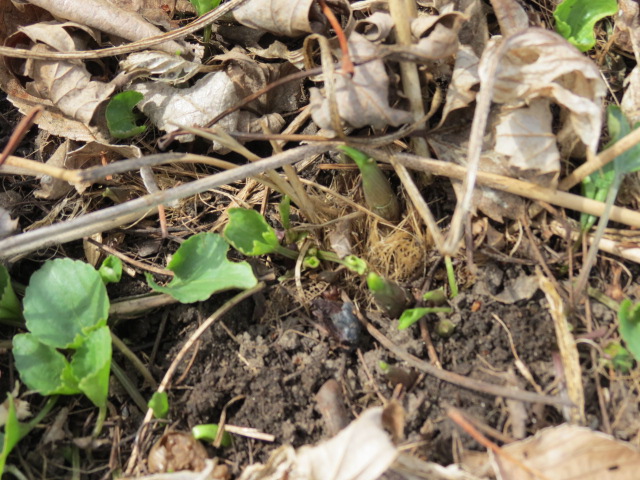 It’s always good when spring arrives and the Hosta and other perennials start coming up! 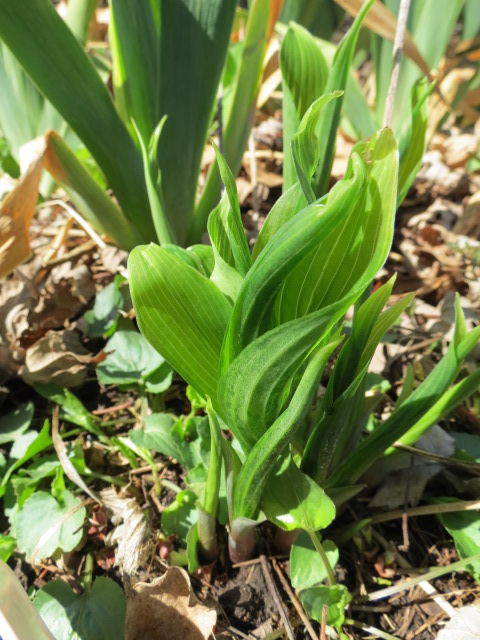 Hosta ‘Red October’ always seems to emerge and start unfurling its leaves in every which direction. 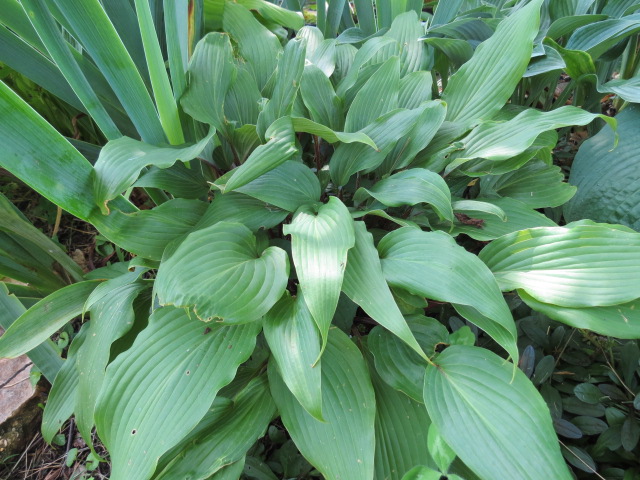 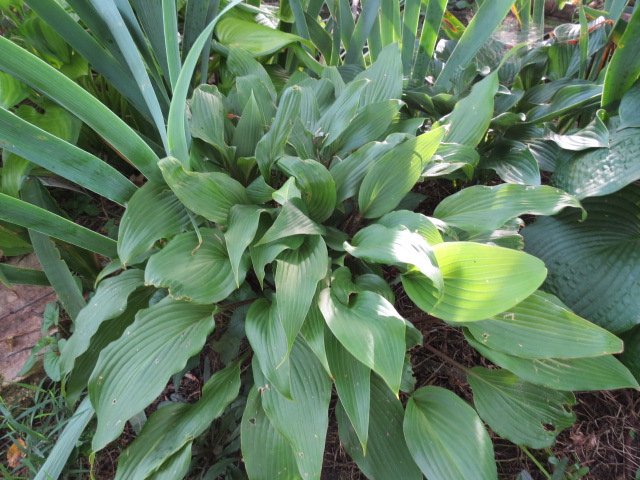 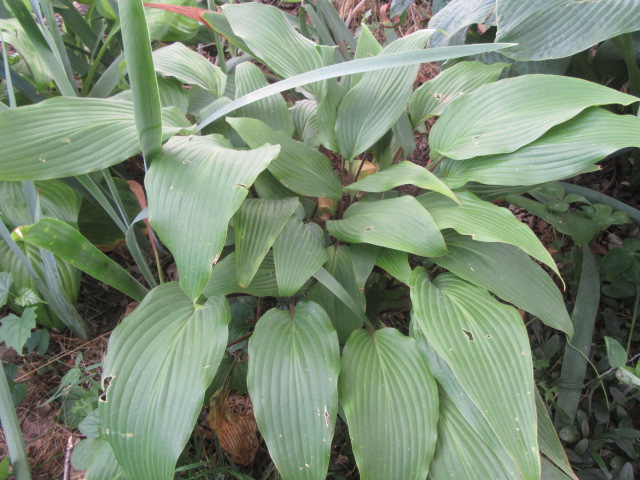 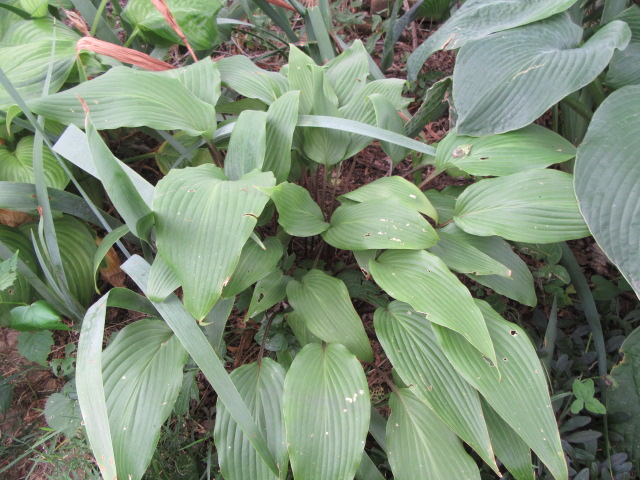 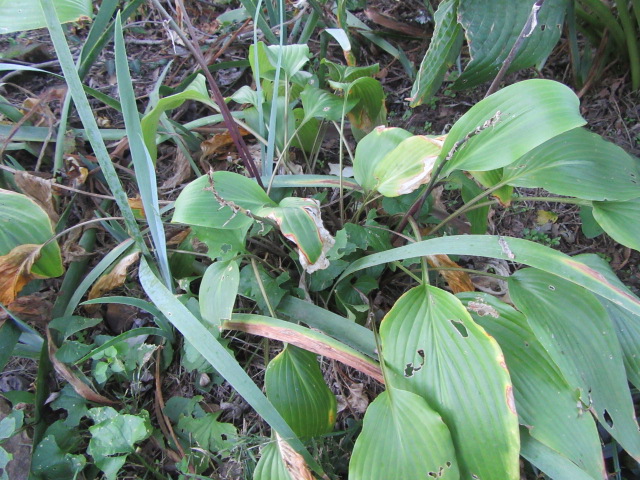 As cooler temperatures and shorter daylengths came, many of the Hosta and other perennials were showing signs that they would soon be hibernating. Now we start the process of waiting all winter to see what will return in the spring.

Hosta ‘Red October’ was kind of slow coming up in the spring of 2018 and I coud tell something was not right. 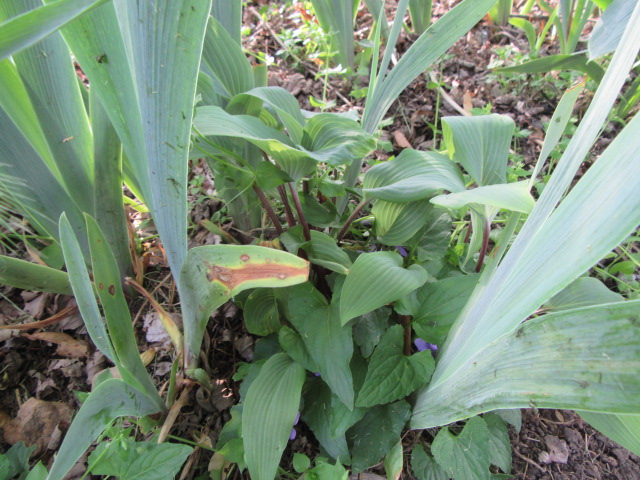 Even when temperatures were warming up and the other Hosta were doing better, Hosta ‘Red October’ was still not growing with the pace as the others. The Iris was getting thicker so I thought maybe it was getting crowded. I had moved Hosta ‘Krossa Regal’ in 2017 because it was having some difficulties (which was behind Hosta ‘Red October’).

I decided to dig Hosta ‘Red October’ and maybe put it in a new location. I found that the moles had been digging and a hole was right under this Hosta. Its roots were right over the hole so I figured that was the problem. I divided the plant in half and moved them to a new location. 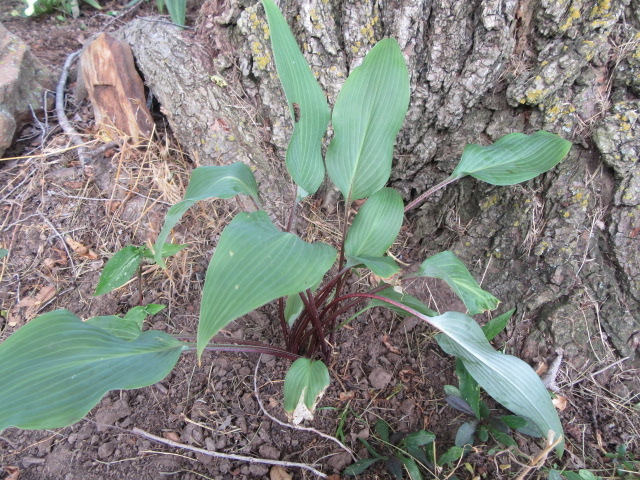 I put one next to one of the Chinese Elm trees…

And the other next to the other Chinese Elm tree on the other side of one of the shade beds. 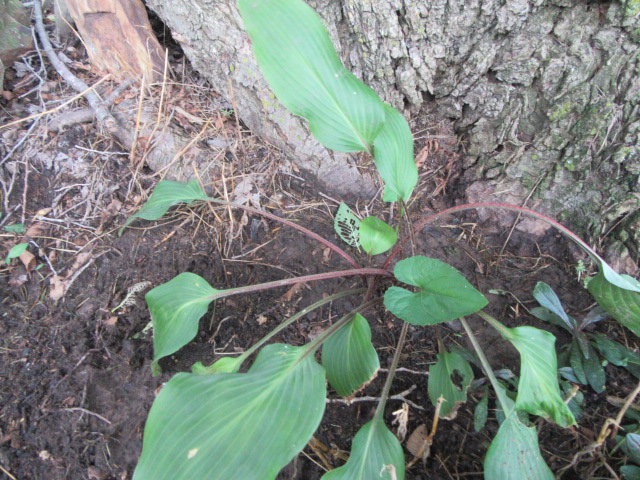 They did OK, but not great. I took photos and measurements of the Hosta on June 20 and 21 but I didn’t measure Hosta ‘Red October’. I didn’t think that would be fair since I had just divided it.

The above photo shows the chalky appearance of the underside of the leaf of Hosta ‘Red October’.

I don’t like having the Hosta cultivars in more than one location, so I think in 2019 I will put the two back together again. Hopefully, it will survive the winter.

Talk about a miraculous recovery! I thought the Hosta ‘Red October’ was completely gone. Each time I checked on the Hosta and took photos of them coming up, Hosta ‘Red October’ was nowhere to be seen. The clump had struggled last spring because of a mole tunnel under the roots, so I dug it up. There were only two plants left in the clump so I put them beside two separate Chinese Elm trees. They didn’t do well all summer but they did survive. This spring they were gone. I dug into the soil where I had planted them and nothing was to be found. Then one day, with no camera, I saw they had both came up. Not just a sprout, but the whole plant! It had only been a couple of days since I took photos and they were not there. It was a pleasant surprise for sure! So, I took both plants and put them where The Hosta ‘Rainforest Sunrise’ had been (where one of the ‘H. ‘Guacamole’ had been last year). 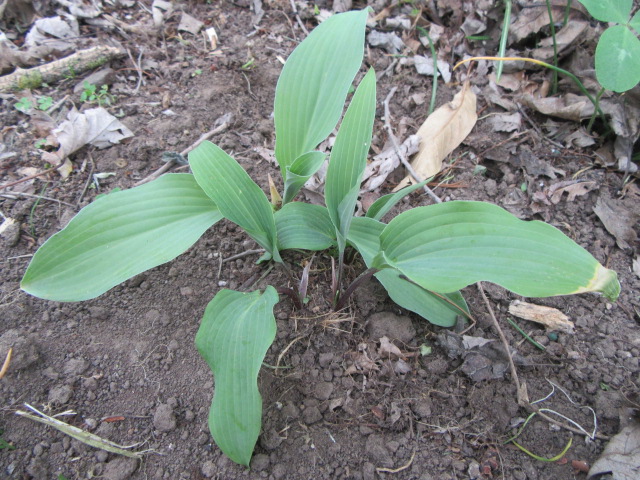 Still doing well on April 24 and happy to be back together again. 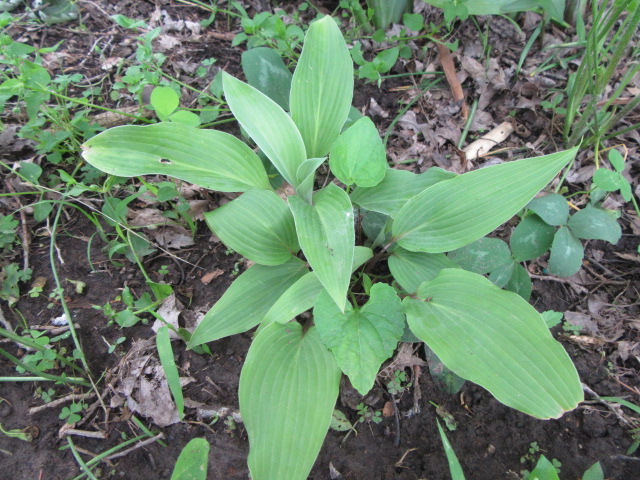 Spring was in the air when the above photo was taken on April 1 and the Hosta have been “working on it”. Most of them have been poking out of the ground for a while and now are beginning to turn green. They are a bit slow sometimes when cool temps linger, but as soon as it gets warm enough they will start growing better. It seems like they are waiting for the perfect opportunity. 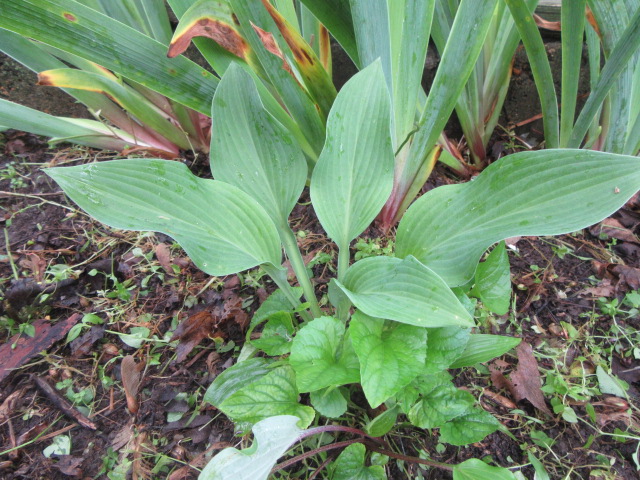 I hope you found this page useful. If you have any comments, questions or suggestions, I would like to hear from you. Please click on the “Like” below if you have visited this page. It helps us bloggers stay motivated. 🙂 Click here for my page about the Hosta genus, growing information and sources. The links below are specifically for this cultivar. There are several good sources of Hosta somewhere toward the bottom on the right side of the page.