The genus, Sedum L., was named and described as such by Carl von Linnaeus in Species Plantarum in 1753. Since that time many plant species have been moved from one genus to another, family names have changed, not to mention the many thousands that have been discovered and became extinct.

The Sedum genus is a very large and diverse group of plants. I was in correspondence with Margrit Bischofberger of the International Crassulaceae Network in 2013 and she had this to say:

“The genus Sedum in a wide sense has been used to accommodate a great number of sometimes fairly diverse plants. At the end of the last century botanists have begun to separate certain groups with distinctive features and give them new names, > Phedimus, > Hylotelephium, < Rhodiola, > Orostachys etc.”…

The list of Sedum species has grow A LOT since 2013 when I moved back to Missouri launched my first Belmont Rooster blog. For example, I was using Version 1.1 of The Plant List (no longer maintained) which listed 392 accepted species of Sedum, a total of 655 synonyms, and 429 names were still unresolved… I started using Plants of the World Online when it launched in 2017 and when I updated on March 30 in 2018 they listed 357 species in the genus.

In 2018 or 2019 (time flies), I sent an email to to the senior editor of Kew about the Phedimus genus which was at that time a synonym of Sedum. His reply was…

“As to Sedum, POWO (Plants of the World Online) still takes a wide view of the genus because there is not yet an agreed system to deal with it. Most of the research has been done in Europe on European species for which a number of genera have been made but it is unclear how they relate to the Asian and American species. So until this is settled we will retain a large Sedum.”

As of when this page was last updated on 11-19-21, Plants of the World Onlie lists 462 species in the genus. Phedimus with 16 species are now accepted and have been since sometime in 2019… At this point, I think most of the “controversial” genera are once again accepted but who knows for how long.

There are MANY popular species of Sedum and cultivars available that are cold tolerant in different zones which makes them a very versatile genus for sure.

Sedums are succulent plants, some of which are annuals, perennials, herbs, and shrubs.

Sedums have long been one of my favorite genera of plants. I have tried many species and cultivars that have survived our zone 6a winters and some have not. I brought several with me when I moved from Mississippi back here only to find they couldn’t handle our winters. Others thrive here with no problem. I have a couple that do just great inside for the winter and stay in pots when outside during the summer.

I added several pages of Sedum which represent the species and cultivars I have experience with. That number will grow as I try new ones. Each page has links to information particular to that species or cultivar which I hope you find useful. You can check out the links below for further reading about the genus.

If you see I have made any errors, please let me know. Your comments are always welcome and appreciated. Please leave a “Like” if you have visited this page. It helps us bloggers stay motivated. 🙂

I brought my first Sedum adolphi (Golden Sedum) home in 2012 when I was still living in Mississippi. I brought home a similar plant labeled Sedum nussbaumerianum (Copper Stonecrop) which is a synonym of Sedum adolphi. I think I brought one of them home from Lowe’s and the other from Wal-Mart. I gave up my original plant in 2014 but found another in 2016 but I severely neglected it… I was pretty busy on on the farm but I came to my senses and since then it has done very well. As with this “type” of Sedum, they need re-grown from time to time which just involves taking cuttings from the long stems and sticking them in the pot. They propigate easily from leaf cuttings as well. This one has never flowered… I have always grown this species in a pot and they do great over the winter inside.

I brought this Sedum adolphi ‘Firestorm’ home from Lowe’s on June 10 in 2018. It has been a great plant and even started flowering in April in 2020. Like Sedum adolphi, it needs re-grown on occasion. This cultivar takes on an orangy glow in more light and its leaves are more pointed than Sedum adolphi. It is a neat plant…

I think I brought this Sedum glaucophyllum home from Lowe’s in 2012 when I was living in Mississippi. It did great for a while, but fizzled out later in the summer. I don’t have a page for this species…

I brouhght home cuttings of this Sedum lineare ‘Variegatum’ when I was helping with a wedding in 2012. It grew and did very well but I don’t have any good photos. I put some in another pot which also did great and brought it with me when I moved back to Missouri. It DID NOT like being in the house over the winter, even in Mississippi, and did not survive… This plant does not have a page…

I brought this Sedum makinoi ‘Salsa Verde’ home from Lowe’s in 2011 when I was living in Mississippi. It did great outside but not so well inside over the winter. I brought it with me when I moved back to the family farm in Missouri in 2013, but it didn’t survive the winter inside… I really liked this cultivar… 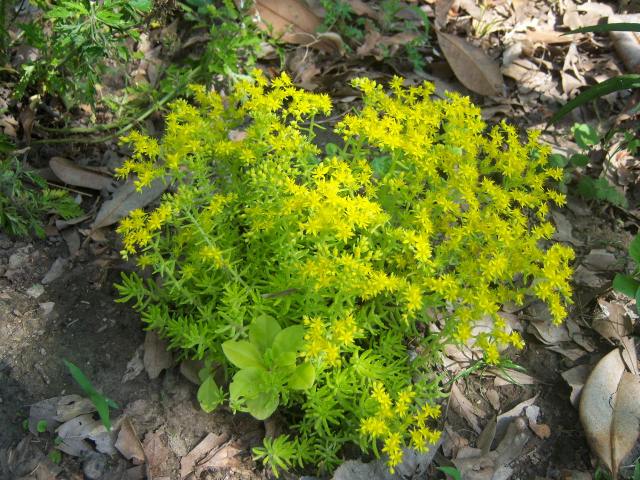 This Sedum mexicanum (Mexican Sedum) was given to be my a fellow friend and plant collector, Walley Morse, in 2011 when I was living in Mississippi. It did great and I brought some of it when I moved back to Missouri in 2013. It isn’t cold hardy in my zone in Missouri so it didn’t survive the winter…

A friend of mine, Kyle Hall, brought me several pieces of this Sedum sarmentosum (Stringy Stonecrop, Goldmoss, ETC.) in 2011 when I lived in Mississippi. Since it is quite common, I didn’t bring any with me when I moved back to Missouri. My parents had this Sedum in a bed next to the house where we lived when I was growing up. At some point, I will bring a start home from somewhere…

I ordered this neat Sedum spathulifolium subsp. pruinosum ‘Cape Blanco’ from a member of a group on Facebook and it arrived on April 13 in 2018. I thought it was a really neat but it went to crap… It had lots of roots, so I attempted to get it going during the summer but that didn’t work out. So much for my green thumb status… There is no page for this plant…

My start of Sedum tetractinum (Chinese Stonecrop) was given to me by Walley Morse in the spring of 2012 when I was living in Mississippi. I brought it with me when I moved back to Missouri in 2013 and put it in the south bed. It did great and spread nicely, but didn’t return in the spring of 2015… It is hardy in my zone in Missouri, so maybe I will try it again if I find it locally.

I think that is it for my experience with the Sedum genus. I am sure I will be adding more as time goes by…