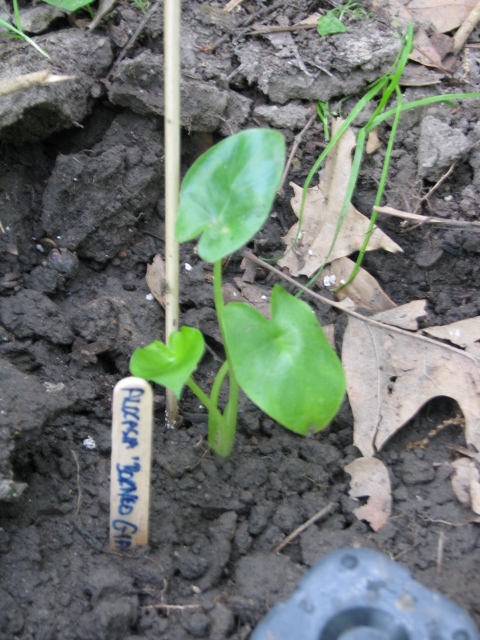 The genus, Alocasia (Schott) G.Don, was named and described by George Don in Sweet’s Hortus Britannicus in 1839. They were first listed as Colocasia sect. Alocasia by Heinrich Wilhelm Schott in Meletemata Botanica in 1832.

As of 11-13-22 when this page was last updated, Plants of the World Online lists 90 species in the Alocasia genus. It is a member of the plant family Araceae with 139 genera. Those numbers could change as updates are made on POWO.

I bought my Alocasia ‘Borneo Giant’ from Wellspring Gardens as a “starter plant” in the spring of 2009 while living at the mansion in Mississippi.

Although the Alocasia macrorrhizos ‘Borneo Giant’ did very well, it didn’t do what some of the information online said it would. Some websites say they can grow 6-8 feet the first year but Brian’s Botanicals says 2-6 feet their first year…

Alocasia macrorrhizos ‘Borneo Giant’ is fairly cold hardy. Some websites say USDA Zones 7b-11 but I think that may be an exaggeration… 9b-11 is more like it.

Alocasia macrorrhizos is reported to be the “tallest” growing Alocasia, reaching up to 12′ to 15′ tall at maturity. 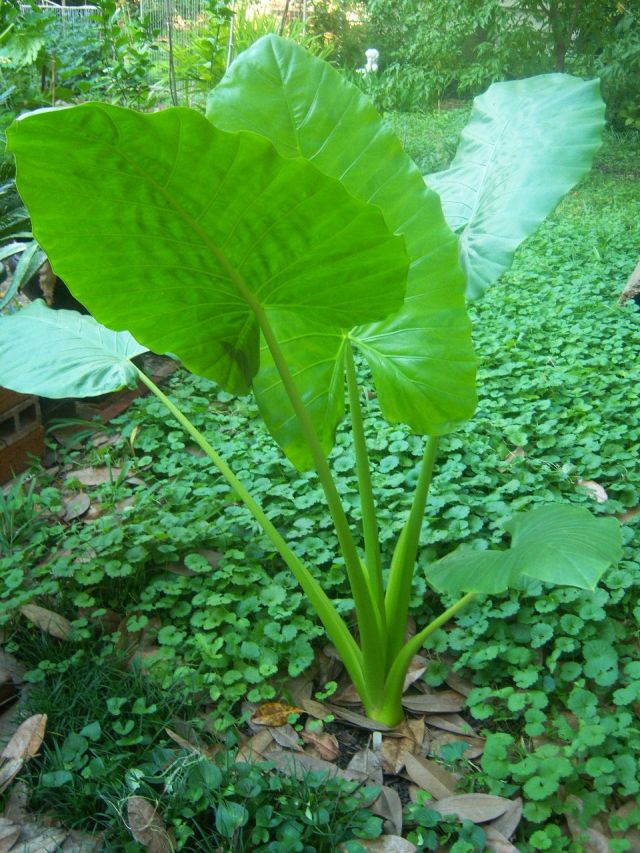 Alocasia macrorrhizos like growing in full sun to part shade with consistently moist soil. Even though I kept most of my Alocasia in pots, I continued planting the bigger Alocasia macrorrhizos ‘Borneo Giant’ in the ground. I always wondered if it was getting enough water even though I watered every other day. Did the ground really get a good soaking and absorb enough? Otherwise, why didn’t this Alocasia grow to the heights mentioned online?

My Alocasia macrorrhizos ‘Borneo Giant’ produced two offsets in 2010, I think. I put one in this planter in 2011 and it did very well. I didn’t take many photos in 2010 or 2011 and I had to borrow a camera because mine was stolen…

I am writing this page in September 2017, so it has been 6 years since the last photo was taken. I did take a lot of measurements which I added to a plant and garden journal. However, those notes are in a laptop that refuses to come on (very old). The Alocasia macrorrhizos ‘Borneo Giant’ must have all died over the 2011-2012 winter since there were no photos in 2012.

While my Alocasia macrorrhizos ‘Borneo Giant’ didn’t grow to the massive size some report on the internet, I have seen photos that prove that they can. Some websites say that these are the largest Alocasia variety, but that may be a little hard to swallow because it depends on several factors. You need to have “just right” conditions, 12 months a year. Organic matter in the soil to provide the right amount of nutrients, ample soil moisture and the right amount of light.

Someday I will buy another one of these and try them out in mid-Missouri.