Stenocereus pruinosus (Otto ex Pfeiff.) Buxb. is the correct and accepted scientific name for this cactus. It was described by this name by Franz Buxbaum in Botanische Studien in 1961. It was first named and described as Echinocactus pruinosus by Christoph Friedrich Otto and Louis (Ludwig) Karl George Pfeiffer in Enumeratio Diagnostica Cactearum in 1837.

Plants of the World Online by Kew lists 21 accepted species in the Stenocereus genus (as of 2-24-21 when I last updated this page). It is a member of the plant family Cactaceae with 144 genera. Those numbers could change as updates are made.

Of course, Lemaireocereus pruinosus is not the correct name now…

Stenocereus pruinosus can e found in its native habitat in Chiapas, Guerrero, Oaxaca, Puebla, and Veracruz in Mexico at 2,600 to 6,200 feet (800 to 1,900 meters) above sea level where they grow in tropical deciduous forests. They are known for their edible fruit.

When I brought my plants in for the winter on October 17, 2017, the Stenocereus pruinosus measured 3 3/4″ tall x 2 3/4″ wide. Ummm… That measurement may have included the spines which I later ignored when taking measurements.

Stenocereus pruinosus grows to become a large shrubby or tree-like cactus. Stems usually have one or more trunks that can grow to 13-16 feet (4-5 meters) tall and a little over 3” to about 4” ( 8-10 cm) in diameter. They normally have 5-6 ribs but can have as many as 8-10, that are widely set and have wavy margins. The areoles are normally around 1 1/2” (3-4 cm) apart and produce 1-4  small grayish to brownish central spines and 5-8 smaller radial spines that are the same color. When it flowers, they come from new growth on the tips of the stems.

Doing very well inside for the winter, the Stenocereus pruinosus was snuggled with many other cactus and succulents on a table in my bedroom when the above photo was taken. They are getting lots of good sun from a south-facing window.

Back outside again for the summer…

After the Japanese Beetle invasion, I moved the potted plants, cactus, and succulents to the front and back porch of the house. The Stenocereus pruinosus is enjoying its summer in the sun on the back porch.

I had to move the potted plants inside for the winter on October 10 because the forecast was calling for an “F” in a few days and the nighttime temperatures were getting cooler. The Stenocereus pruinosus measured 3 7/8″ tall x 3″ wide but I forgot to take its photo… GEEZ! 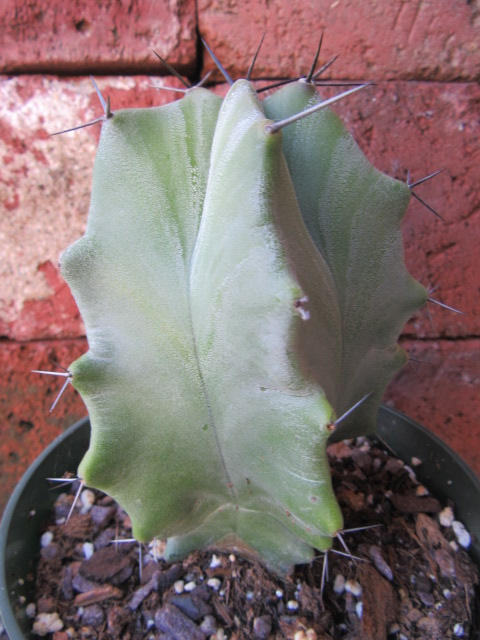 Stenocereus pruinosus is a very interesting plant for sure. Its areoles produce 1-4 short and stout central spines. Llifle also says they have 5-8 radial spines… My cactus has 2-4 spines on its areoles, usually 3, but it is hard to say if they are radial spines or central spines… The dusty-white appearance is from the “bloom” which is a characteristic of this species.

All the plants made it through the winter and were glad to be outside for the summer. I put the Stenocereus pruinosus and most of the other cactus on the back porch.

I was fairly busy over the summer so I didn’t take a lot of photos of the potted plants. They all did very well despite a little neglect.

The next thing I knew, I had to move the potted plants inside for the winter on October 11 because an “F” was in the forecast. I always take photos of the plants when I move them inside and measure the cactus and some of the succulents. The Stenocereus pruinosus measured 4 3/4″ tall x 2 3/4″ wide. That’s pretty good considering it was only 2 7/8″ tall when I brought it home on February 1, 2016. At least I didn’t forget it’s photo this time…

I had to move the potted plants inside for the winter on October 15 because an “F” was in the forecast. As always, I take photographs and measurements of the cactus when I bring them in. The Stenocereus pruinosus did very well over the summer and measured 5 1/4″ tall x 2 3/4″ wide on October 15. 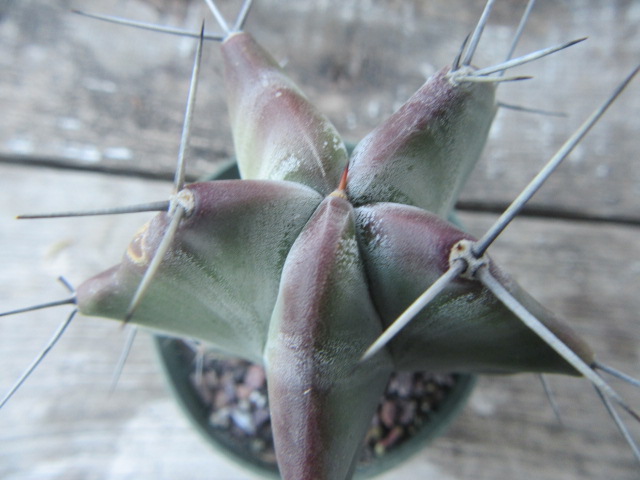 The above photo is a top view of the Stenocereus pruinosus sporting a purplish glow from being in the sun.

I have really enjoyed the Stenocereus pruinosus as a companion and I think it is a great looking specimen. It is much different than the other cactus in my collection. I like the silver color of the bloom and the way it gets darker with more light. There is also a variegated variety of this cactus which would also be very interesting.