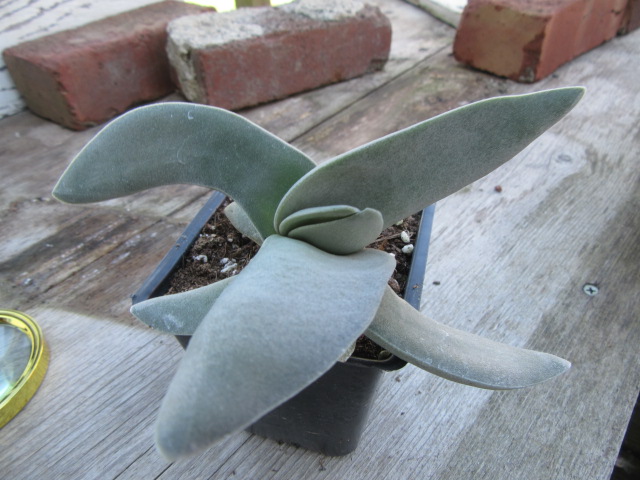 Crassula perfoliata L. is the correct and accepted scientific name for this species of Crassula. Both the genus and species were named and described as such by Carl von Linnaeus in the first volume of the first edition of Species Plantarum in 1753.

Crassula perfoliata var. falcata (J.C.Wendl.) Toelken is the correct and accepted infraspecific name for the plant on this page. It was named and described as such by Hellmut R. Toelken in the Journal of South African Botany in 1975. It was first named and described as Crassula falcata by Johann Christoph Wendland in Botanische Beobachtungen in 1798.

At this point, this plant is most commonly listed online as Crassula perfoliata var. falcata and Crassula perfoliata var. minor, the latter is now considered a synonym. Previously, it may have been the other way around. The reason “var. falcata” is accepted and “var. minor” is a synonym is because the latter was named and described in 1978 while “var. falcata” was named and described in 1975. The early bird gets the prize… Whichever name was described first is “usually” chosen as the accepted name… Just keep in mind that the links at the bottom of the page may have this species listed by either name… Both names were validly published…

Plants of the World Online by Kew lists 205 species in the Crassula genus (as of 4-8-21 when last updated this page). It is a member of the plant family Crassulaceae with 36 genera. Those numbers could change as updates are made.

I brought this Crassula perfoliata var. falcata home from Wagler’s Greenhouse. I had wanted one of these plants for a long time, so I was very happy to see a few at the greenhouse. The plant measured 4″ tall, after standing it up, and 6″ wide from leaf tip to tip. It will need repotting in a proper soil mix plus I have to check the roots. I don’t want its roots trying to grow through a plug wrapper…

This species hails from the Cape of Good Hope in South Africa (Eastern Cape Province) where it grows in quartzitic sandstone outcrops on north, east, and west-facing cliffs along dry river valleys.

The Crassula perfoliata var. falcata is a neat plant with awesome thick, glaucous, gray-green, sickle-shaped leaves arranged in overlapping pairs. The glaucous appearance comes from the soft “bloom” on the leaves giving it a grayish glow… Hard to explain, but I am sure you know what I mean. The leaf margins have a feeling similar to a closed zipper due to very tiny teeth. PlantZAfrica (see link below) says the leaves can sometimes have reddish markings… Plants are normally unbranched but offset at the base.

I suppose for most people, and probably for me when I see them, are the flower clusters of this species. The flower clusters, around 6″ in diameter, produce a multitude of bright orange to scarlet red flowers that last about a month. Llifle (Encyclopedia of Living Forms) says the flowers have the scent of sweet cinnamon… I am not sure how old the plant has to be before it produces flowers…

Information suggests the Crassula perfoliata var. falcata is a SSSSLLLLOOOOWWWW grower but easy to care for as long as a few basic rules are followed. They prefer bright light and regular watering during the growing period in fast-draining soil. As with any succulent, extended periods of wet soil will cause their roots to rot. Basically, they sound like they have similar requirements as most succulents, especially others in the Crassula genus (and the plant family Crassulaceae).

I just acquired this plant, so I don’t have any experiences to share. In the past, I have grown several crassula species but when I moved back to the family farm in west-central Missouri in 2013 I didn’t have adequate light. Now I have a plant shelf in a south-facing window that will provide better light. SO, I will give the Crassula perfoliata var. falcata, the Propeller Plant, my best shot… I WILL add more photos and information as time goes by.

You have to sort of mimic the soil where species grow in their native habitat. For that, you almost have to go see for yourself… Typically, they grow in fairly rocky soil.

I hope you enjoyed this page and maybe found it useful. If you have any comments, questions, or suggestions I would like to hear from you. Please click on “like” if you visited this page. It helps us bloggers stay motivated. 🙂 You can check out the links below for further reading. The links take you directly to the genus, species, and/or cultivar of this plant. If you notice I made an error, please let me know. Of course, you can always send me an email at thebelmontrooster@yahoo.com.

NOTE: The figures may not match on these websites. It depends on when and how they make updates and when their sources make updates (and if they update their sources or even read what they say). Some websites have hundreds and even many thousands of species to keep up with. Accepted scientific names change periodically and it can be hard to keep with as well. There a few widely used websites that haven’t even been maintained for several years. In my opinion, Plants of the World Online by Kew is the most reliable and up-to-date plant database and they make updates on a regular basis. I make updates at least once a year and when I write new pages and add new photos but I do get behind. We are all a work in progress. 🙂