Crassula ovata (Mill.) Druce is the correct and accepted scientific name of this species of Jade Plant. It was first described as such by George Claridge Druce in Botanical Society and Exchange Club of the British Isles in 1917. It was FIRST named Cotyledon ovata by Philip Miller and described in Gardener’s Dictionary, 8th Edition, in 1768.

I bought this plant from Lowe’s on August 25, 2012, in Greenville, Mississippi. The label said Jade Plant ‘Gollum’ on the first line and Crassula argentea on the second line.

Crassula argentea was first described by Carl Peter Thunberg in Nova Acta Physico (short version of a LONG title) in 1778. Somewhere, somehow, botanists decided this species was the same as Crassula ovata… Many growers are still selling them as Crassula argentea because they don’t change the labels.

When I was directed to Margrit Bischofberger of International Crassulaceae Network for a plant ID, she informed me that this plant was actually Crassula ovata ‘Ladyfingers’ and not Crassula argentea ‘Gollum’. I had been using The Plant List but I hadn’t noticed the name change. She directed me to a page on her website about the Tolkien Group by Roy Mottram. This link below will take you to the Crassula ovata page on the International Crassulaceae website. Scroll down and click on “Tolkien Group” or “Crassula ovata Tolkien Group by Roy Mottram” if you want some further reading.

The article by Roy Mottram explains the reason the leaves are cylindrical instead of flat…  I hope you take time to read it yourself. It is pretty interesting.

When I moved to Missouri in February 2013, of course, I brought this plant with me. It started growing really well once the weather warmed up so I could move my plants outside.

There are several mutations of Crassula ovata that have taken on similar leaf shapes. According to the article by Roy Mottram (see link above), it is likely caused by a mycoplasma which are immobile bacteria with no cell walls. The bacteria causes the leaves to inroll and infuse together. The leaf tips appear to be “sunk in”.

Some say it is possibly a hybrid but that doesn’t explain the leaf shape. 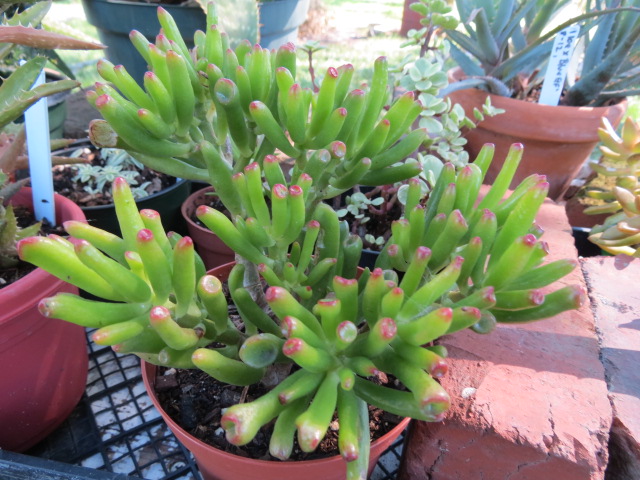 The mutations are said to grow to a smaller size than the normal Crassula ovata. There are several cultivars of Crassula ovata that are also smaller.

Crassula ovata are very popular subjects for bonsai. They respond very well when the pruning is correctly making them popular for beginners.

I moved most of the succulents to a table in my bedroom when cooler temps arrived in October. Most did very well although some stretch somewhat.

I moved the plants back outside to the area behind the shed when the temps warmed up enough. They were all happy to get back in the fresh air. 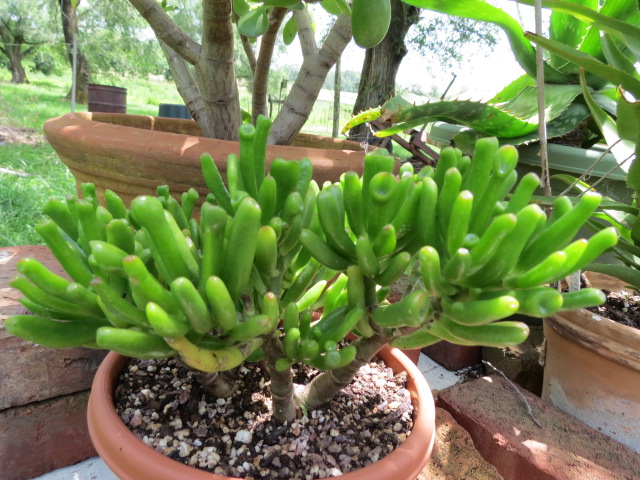 Crassula ovata are very easy plants to grow. They need a very well-draining soil and do well in the ground in certain parts of the country. They are very easy to grow as potted plants as long as the soil is well drained. It is recommended cactus and succulents be in a mixture of 2 parts potting soil with 1 part grit and 1 part pumice or perlite. You can experiment because I have found the Crassula ovata is not all that particular. As long as the potting soil is very well-draining they should be fine. Pumice can take the place of both grit and perlite, so you can mix it about 50/50 with your potting soil if you like (which already had pumice anyway).

They appreciate regular watering during their main growing periods and sparsely during the winter. Their soil should dry between watering. When their leaves start to get a little wrinkly, they need a little water.

They like bright light but do fine in light shade. Mine always get a little morning sun and filtered light the rest of the day.

Regretfully, I gave most of my plants up in the summer of 2014 including this one.

I found this Crassula ovata ‘Gollum’ from the Amish country store on May 5, 2018. My sister and niece came down to go some plant shopping at the four local Amish greenhouses and luckily I decided to stop at one of their stores. This was the only one they had so I grabbed it.

It wasn’t mislabeled like the first one because there was no label at all. I was hoping it was another ‘Lady Fingers’, but I think it is ‘Gollum’. At first, it did look like a ‘Lady Fingers’ but as it grew it looked more ‘Gollum’. So I had to change the captions…

One day I saw a couple carrying a pot with a plant like this and I said, “Oh, I see you have a Crassula ovata ‘Ladyfingers'”. They replied, “No, the tag says Crassula ‘Gollum'”.  🙂 Hmmm… 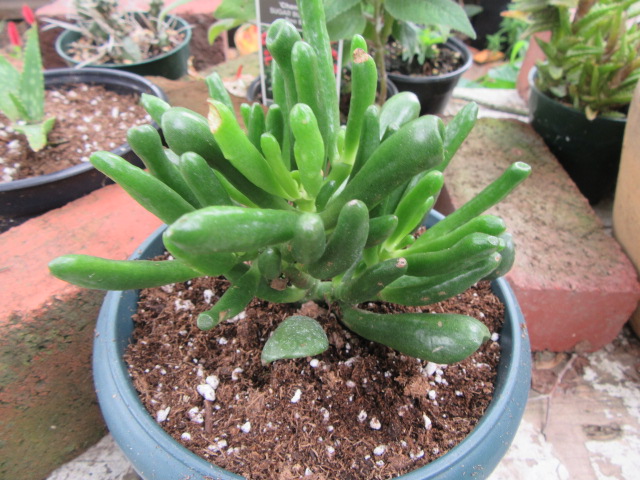 The Crassula ovata ‘Gollum’ in a new and larger pot on June 24. 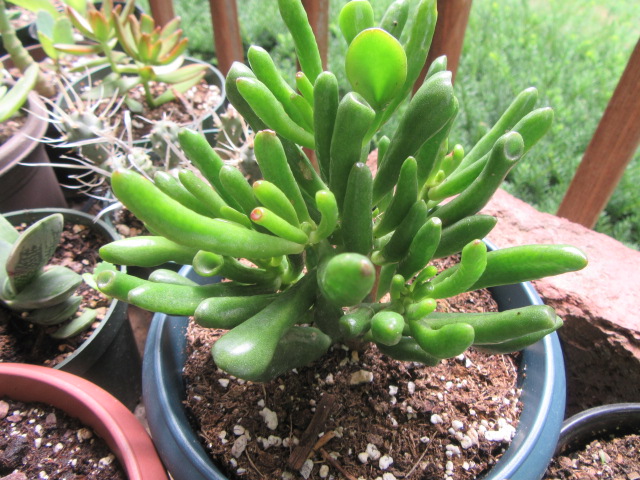 I moved most of my potted plants to the front porch on July 4 because of a Japanese Beetle invasion. They ate the leaves of the Chinese Elm tree the potted plants were under and started sampling a few of the plants. 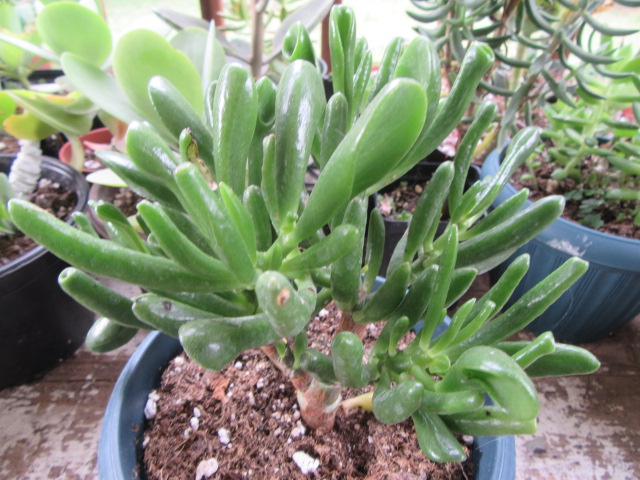 I moved the potted plants inside on October 10 because the weather forecast was predicting an “F”. 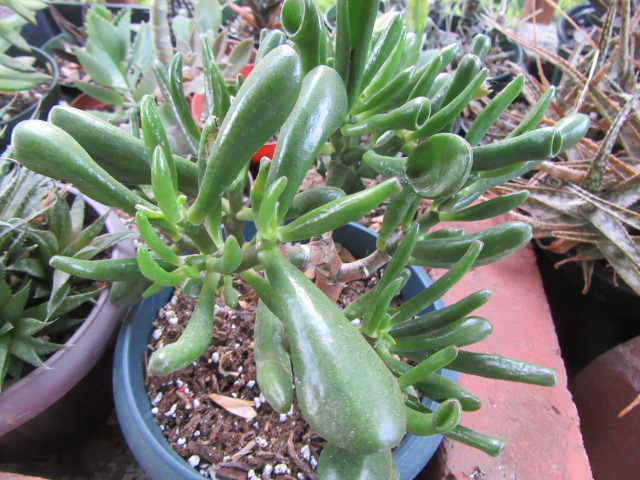 I moved the plants back outside when nighttime temperatures stayed warm enough. They were glad to get outside in the fresh air. 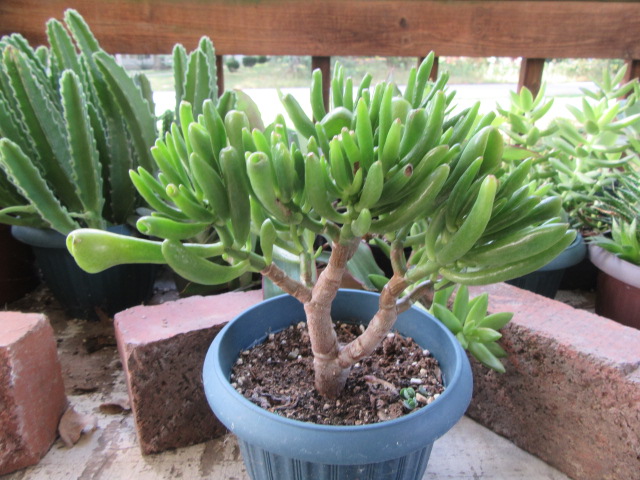 The Crassula ovata ‘Gollum’ did very well during the summer on the front porch. There was an “F” in the forecast so I had to move the plants inside for the winter on October 11. I always photograph all the potted plants as I bring them inside and measure the cactus and some of the succulents. This plant measured 7 1/2″ tall x 9 1/4″ wide.