Kalanchoe daigremontiana Raym.-Hamet & H. Perrier is the correct and accepted scientific name for this species of Kalanchoe. It was named and first described by Raymond-Hamet and Joseph Marie Henry Alfred Perrier de la Bâthie in Annales du Musée Colonial de Marseille in 1914.

Bryophyllum daigremontianum (Raym.-Hamet & H. Perrier) A.Berger is considered a synonym of Kalanchoe daigremontiana (once again). It was named and described as such by Alwin Berger in one of the volumes (maybe 18a) in the 2nd edition of Die Natürlichen Pflanzenfamilien (The Natural Plant Families) in 1930. Tropicos lists Heinrich Gustav Adolf Engler and Karl Anton Eugen Prantl as “in authors”. Actually, Mr. Engler and Mr. Prantl were working on the many volumes of the 1st edition of Die Natürlichen Pflanzenfamilien. Mr. Prantl died in 1893 and Mr. Engler completed it in 1915.

The 1st edition of Die Natürlichen Pflanzenfamilien contained 23 volumes and was published in four parts from 1887 to 1915. An incomplete second edition was issued in 28 parts from 1924 through 1980. Apparently, Mr. Berger’s description of Bryophyllum daigremontianum. Mr. Berger’s Wikipedia page doesn’t mention anything about Die Natürlichen Pflanzenfamilien.

Currently, as of this update on 1/20/19, Plants of the World Online lists 156 accepted species in the Kalanchoe genus. I am not sure how many times I have changed the name of this plant but it is getting exhausting already. Back and forth from one to the other. The last time I changed the name was February 10 when I noticed Plants of the World Online said Bryophyllum daigremontianum was the correct name along with 44 other species. Now, ONCE AGAIN, the genus Bryophyllum is a synonym of Kalanchoe. I guess I should check my plant’s names more often, but who has the time?

Now, I have to change all the captions under the photos AGAIN! I wonder how long this will last? How about if I just leave both names then you can take your pick.

My first, um, Mother-Of-Thousands was given to me by the owner of Wagler’s Greenhouse in 2014. It was a very beautiful plant with a few small “plantlets” along its phylloclades. This was my first experience with this plant and little did I know why its common name was “Mother of Thousands”. I was about to find out… What appears to be leaves on several species are actually phylloclades which are flattened branches modified for photosynthesis. Ummm… Flattened stems are called cladodes. Interesting that phylloclades still have a petiole that attaches to the stem. I wonder if a plant with a cladode that produces a phylloclade is attached to a petiole?

Back in 2014 when I did my first name research on this plant I was still relying on The Plant List and Tropicos. I was also using Llifle (Encyclopedia of Living Forms), the SucculentGuide.com, GRIN (Germplasm Resource Information Network-USDA), and the International Crassulaceae Network. Version 1.1 (updated in 2013) of The Plant List, which is no longer maintained, said BOTH Kalanchoe diagremontiana and Bryophyllum daigremontianum were accepted names. That was weird but not uncommon because there were (are) many plants that have multiple accepted scientific names. Botanists and horticulturalists (etc.) are working to correct that problem. Doing so is adding a lot of confusion for gardeners who want to know the correct scientific names. We aren’t always aware when names change back and forth. Of course, the industry prints thousands of labels with incorrect names. They can’t keep up with it either. What if they reprint the labels then the name changes back again? Actually, anyone can use either name providing it is backed up by a legit and validly published description. Both genera were validly published.

I gave up many succulents in the late summer of 2014 then had to start all over. I went back out to Wagler’s Greenhouse and got another one of these strange plants.

Many members of the Kalanchoe genus are quite variable. Some of this species have darker leaves with purple markings, some are fuzzy, etc. They also hybridize with other members in the genus. The photos of Kalanchoe daigremontiana on the LLIFLE (Encyclopedia of Living Forms) website show plants with completely different leaves…

To say this plant multiplies by plantlets is such a vague understatement. It isn’t even the tip of the iceberg. Maybe I should say the beginning of the flood as the iceberg melts. Those little plants grow aerial roots so when they fall off they are completely ready to grow.

These plantlets come up everywhere! Every pot nearby had its offspring as well as the cracks in the table, between bricks, etc. I was surprised they didn’t grow in the carpet when inside. I actually left a few on the floor to see if they would. 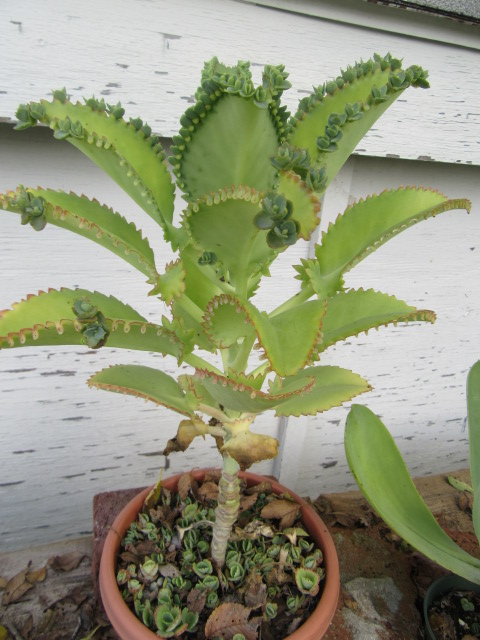 Seriously, though, there are many plants with certain hang-ups we deal with because we like them. We have to learn to adapt with their personalities just like we do with other people, chickens, cows, cats, birds and everything else. We all have to survive and nature has adapted many ways to do so without our help. Sometimes, though, we need to intervene so there isn’t a population explosion. Nature does that with the changes in seasons but we go and take the plant in the house…

This plant continued to grow while it was inside for the winter. It wasn’t in bright enough light so it stretched way out proportion.

This pot was FULL of plantlets at one time but have shallow roots so they are easy to pull up. I know, that seems like such a waste, kind of like murder, but sometimes you just have to do it. I always ask forgiveness and eventually we move forward. 🙂

The main stem died but I had left a few of the larger plantlets. Once I removed most of the plantlets, the ones that were left began to grow much better.

The above photo was taken about four months after the one before and you can see how fast they grew. The temperatures were starting to get cooler, I moved the plants into the basement temporarily. After a few days, I moved the cactus and succulents to my bedroom next to a south-facing window. 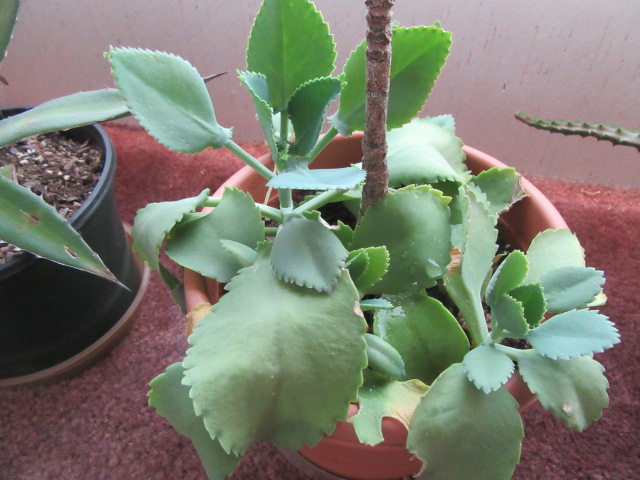 I moved some of the succulents to the windowsill in the kitchen and others to the table in my bedroom. I put the larger pots on the floor under the table where they received a lot of sun from a southern exposure. When the temps warm up and the plants are back outside I will put these plants in their own pots. I have some experimenting to do and more plants always make it easier.

Once the temperatures warmed up, I moved all the potted plants back outside for the summer.

Now, that is much better…

On July 4 I had to move the plant tables and most of the plants to the front porch. We had a severe Japanese Beetle invasion and they completely changed the environment where most of the potted plants were. The plant tables were behind a shed under an old Chinese Elm tree and the beetles love their leaves. We went from light to part shade to full sun almost overnight…

As you can tell, most of their phylloclades are LOADED with plantlets…

The four smaller Kalanchoe daigremontiana are doing well on the front porch.

Well, they just can’t help themselves! The Kalanchoe daigremontiana is a regular baby factory! 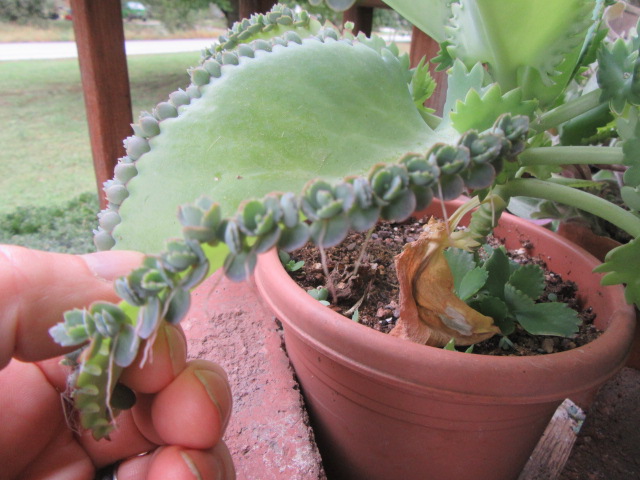 The plantlets grow roots while still attached so they are ready to grow when they fall off.

When I moved the plants inside for the winter I decided to remove the plantlets so they wouldn’t be falling off on the floor and in other pots. That seemed like a good idea at the time.

All I can say about the Kalanchoe daigremontiana for 2019is the same as usual. Continues to grow and produce LOTS of plantlets as usual. Once again the main plant grew by leaps and bounds and became quite tall so I cut the stem several inches below the lowest leaves and put it back in the pot with fresh potting soil. It never flinched a bit.

I hope you enjoyed this page and look forward to adding more photos and information. If you have any comments, questions or suggestions, I would like to hear from you. You can check out the links before for further reading. Please click on the “Like” below if you have visited this page. It helps us bloggers stay motivated. 🙂