Plants of the World Online by Kew lists 57 synonyms of Sempervivum tectorum, as of 2-22-21, which you can view by clicking HERE. I didn’t want to add the entire list…

Sempervivum tectorum L. is the correct and accepted scientific name for this species of Sempervivum. The genus and species were described as such by Carl von Linnaeus in the first edition of Species Plantarum in 1753.

Plants of the World Online by Kew lists 51 species in the Sempervivum genus (as of 2-22-21 when I last updated this page). it is a member of the plant family Crassulaceae with 26 genera. Those numbers could change as updates are made (and likely will).

I found this Sempervivum tectorum at Wagler’s Greenhouse in 2014. It wasn’t labeled but with a little research, it was easy to determine it was a cultivar of Sempervivum tectorum. I came to that assumption by the leaves and the fact that that species is the most widely available Sempervivum. There are several thousand named cultivars, so unless you know for sure from the start, it is nearly impossible to find out what cultivar you actually have. So many look alike and the species is variable.

Sempervivum tectorum have been popular for at least 200 years. The Romans believed they protected buildings against lightning strikes which is one reason they are popular as roof-top plants. It was also believed they protected the occupants against sorcery and ensure their prosperity. Well, there were other reasons for using them on roofs including they helped preserve thatched roofs and helped to prevent fires (or at least its spread). The Wikipedia article about this species says it has been known to humans for thousands of years…

Being grown for so many years has led to its many common names. One of the most interesting is “Welcome home husband, however drunk you be”.

There were also many medicinal uses for this plant which you can read about from a few of the links below.

Sempervivum tectorum forms broad, rosette-forming clumps that spread by offsets. Mature plants develop broad, flat, pointed leaves that are sometimes suffused with red. Carl Linnaeus’s description in 1753 in Species Plantarum says “its leaves are ciliate, that is, fringed with hairs.”

Sempervivum tectorum multiplies by offsets which they start producing at a young age. Once the parent plant flowers and sets seeds, it will die, leaving behind many young.

Sempervivum are very easy to grow and they only have a few rules. The most important is their soil and water. They need very well-draining soil and raised beds are very good for that reason. They are great in containers in potting soil amended with extra perlite and chicken grit or pumice. I used 2 parts potting soil amended with 1 part chicken grit (from the feed store) and 1 part perlite for many years. Many cactus and succulent growers and collectors recommend pumice over perlite, so in 2018 I started using a 50/50 combination of potting soil and pumice. Sempervivum aren’t especially fond of a peaty mix because it holds water which is why it needs to be amended. Sand shouldn’t be used unless it is very course because it fills up the airspace in the potting soil. Of course, basically the only potting soil I can find locally is peat-based.

They appreciate regular watering during the summer, but not in the winter. Of course, they understand mother nature and we can’t control what she does. For that reason, if you overwinter your Sempervivum outdoors, they need to be in a location where drainage is adequate. If you grow them in pots, they require very little water during the winter, if any at all. It just depends on where you keep them. Believe it or not, I kept mine in pots in the basement where they did very well in low light and hardly ever gave them water. The temperature stayed around 65 degrees. 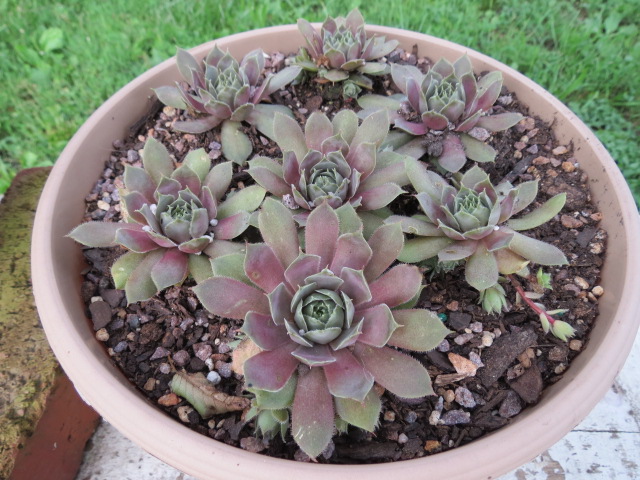 Sempervivum likes bright light but needs a shadier site in areas with very hot summers. I kept mine on the potting tables behind the shed, under an elm tree, where they received mainly filtered sun.

This species is very cold tolerant and my brother even had several in his front yard in Minnesota.

I gave up most of my plants in the summer of 2014 and 2015 and now am rebuilding my collection. I need to find more Sempervivum tectorum, hopefully named cultivars. There are many sources online, but I really enjoy plant shopping in person.