Hello everyone! I hope this post finds you all well. I decided to break the cactus and succulent update into several posts instead of making one long post. They are all inside now except for the Cylindropuntia imbricata (Tree Cholla), a few Sedum, and the Sempervivum x ‘Killer’ that always overwinter outside. Hmmm… I forgot to take their photos. In the midst of the updates, I will probably make a few posts to highlight specific plants.

On October 11 I moved all the potted plants inside as I mentioned earlier.  As always, once we get ZAPPED the temps warm back up. So, I moved the cactus and most of the succulents back outside for a few days again. I even put the Alocasia that was on the front porch back on the front porch. 🙂

Now, on with the post. In alphabetical order… Just click on the name of the plant if you want to view their pages. I may or may not have all their pages updated. If you do go to their pages and happen to click on the link to Llifle (Encyclopedia of Living Forms) at the bottom of the page, you may notice it isn’t working well… I sent an email to who I think maintains the site and at least now it does open but it is still not functioning properly. Hopefully, he will get the issue solved because it is an AWESOME website.

The above photo is the Acanthocereus tetragonus commonly known as Triangle Cactus, Fairy Castle, Barbed Wire Cactus, Sword Pear, Dildo Cactus, and Night Blooming Cereus. Some of those names are also associated with other cactus. The species is often confused with Cereus hildmannianus subsp. uruguayanus. Very similar in several ways, but different in many. I had a cactus in 2015 that I gave up on identifying because it was similar but different… Now I think it was probably an Acanthocereus tetragonus, too. They grow very large in the wild, but smaller monstrous forms are what is generally found in the retail market. So, while the native plants are called Triangle Cactus and so on, someone gives the miniatures smaller names like Fairy Castles. That gets very confusing for people when they buy unlabeled plants or have generic tags that say “Cactus”. Then they get confused between Fairy Castles and Fairytale Castle which are two different species.

I brought this plant home from Wagler’s Greenhouse in September 2018. It measured 3″ tall x 2″ wide when I brought it inside last October 10 and now it is 4 1/2″ tall x 2 7/8″ wide. The offsets have grown quite a bit as well. It was in full sun on the back porch all summer so it has a nice tan. Hmmm…

Ummmmmmmmmmmm……… I know the Adromischus cristatus (Crinkle Plant, Key Lime Pie) doesn’t look all that hot, but it is better than it has been for a long time. It was very small and cute when I bought it from Lowe’s in April 2017 and grew to 4″ wide by October 17 when I moved the plants inside. Over the winter it became very weird and kind of went dormant. It got down to almost nothing and I expected it to die. When I repotted it in 2018 it didn’t seem to help much. I thought surely it would die again during winter. But, guess what? It didn’t die. So, I repotted it a few months ago and it perked up. Hopefully, it will survive the winter without losing most of its leaves and do even better in 2020. The only thing different was adding pumice (50/50) instead of additional perlite and I didn’t add any chicken grit. Using pumice takes the place of amending with additional perlite and grit.

WELL… This past summer the Agave univittata (var. lophantha) (Center Stripe Agave) has been in full sun on the back porch. I always had it in light shade during the summer pretty much since I brought it home in July of 2016. Back then it had much broader and shorter leaves and I thought perhaps they grew longer because it wasn’t getting enough sun. But, even in full sun, the new leaves this past summer grew long as well. So, maybe this is normal… Maybe that is a good thing because it would look weird with long leaves on the bottom and short, fat leaves on the top. Of course, there are a few Kalanchoe daigremontiana (Mother of Thousands) growing in the pot. Oh, the Agave now measures 13″ tall x 26″ wide. 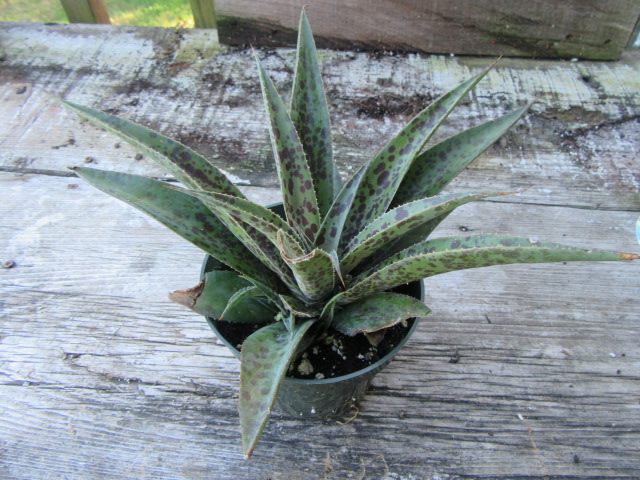 For many years I wanted to try an x Mangave so I was happy to find a few ‘Pineapple Express‘ to chose from at Muddy Creek Greenhouse on June 13. “Pineapple Express” was a 2016 introduction from Walters Gardens and is a cross between x Mangave ‘Jaguar’ and ‘Bloodspot. The x Mangave are/were created by crossing Agave species with Manfreda species. Well, that is until someone had the audacity to decide the genus Manfreda is synonymous with Agave… That is weird because there were several differences between the two genera. Hmmm… In time, this plant will grow to 18″ tall x 24″ wide but for now it is just 4 1/4″ tall x 9″ wide. I can tell it has grown since I brought it home but somehow I forgot to measure it then. If you think that is strange, I haven’t got a page for it yet!

I really like the spotted leaves which may come from Manfreda maculata, I mean Agave maculata. 🙂

I have had Aloe juvenna (Tiger Tooth Aloe) since 2009 when I rescued a broken piece from Wal-Mart in Greenville, Mississippi. I was Aloe newbie at the time and I thought it was strange it took it almost a year to root. I brought home the above Aloe juvenna from Wagler’s Greenhouse in 2017 and the longest stem in the clump is now 14″ long. This is one plant you want to keep in the right amount of sun. To much shade and the leaves stretch. To much sun and the leaves burn… I think the front porch has been a good spot in the summer with a south-facing window in the winter. 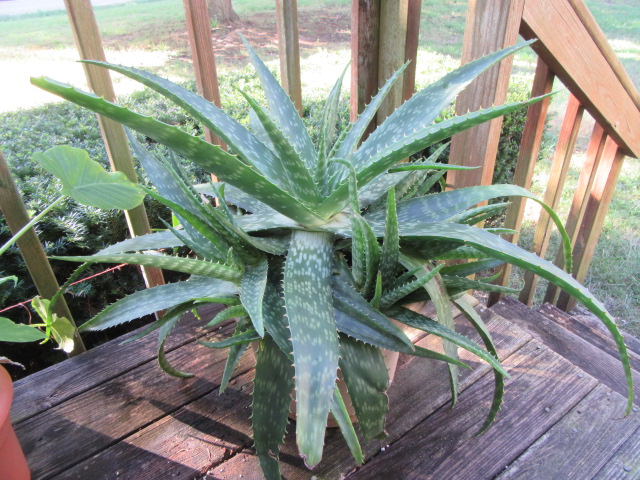 Hmmm… This is what happens when your Aloe maculata is happy! Give it a little attention by complimenting it once in a while and put it where it can be noticed and it will be very happy. It grew its first flower this summer. It’s grandmother, not sure how many greats to add, was given to me by a good friend when I was living in Leland, Mississippi in 2009. I didn’t know the name at the time, so I called it ‘Kyle’s Grandma’ because the offset came from Kyles’s grandmother. The plant in the above photo had growing issues for a while because it wasn’t getting much attention by the shed where the plants used to be. Once I had to move the plants to the front porch last summer because of the Japanese Beetle invasion, I started paying attention to it more. I gave it a new pot and new soil and put it by the steps and it took off. This past summer it has grown like crazy to a whopping 19″ tall x 42″ wide. I need to get the pups out of the pot soon! It is quite a show stopper!

OH, the Aloe x ‘Lizard Lips’! My second Aloe in 2009 was a ‘Lizard Lips I bought from Lowe’s in Greenville, Mississippi. I had it until I gave up most of my plants in 2014 but I found another when I started collecting again in 2016. Luckily, I had given an offset to Wagler’s Greenhouse so this clump could actually be that offset. It has been a great miniature Aloe, but we have had to learn a few things about each other over the years. My original plant almost died every winter but barely hung on somehow. Apparently, although it was in a beautiful glazed pot, it didn’t like it. Attention is not so much of a requirement (it doesn’t like hugs like Aloe maculata) just as long as you water it when it is thirsty and give it the right amount of sun. It particularly seems to like a bigger pot AT LEAST once a year although it didn’t get one yet in 2019. The potting soil has to be VERY well-draining because it absolutely does NOT like wet feet. That is no problem because there are so many leaves barely any water gets into the soil. It is also a prolific bloomer, sometimes up to 8 stems at the same time. Currently, the clump has filled the pot and measures 6″ tall x 12″ wide. 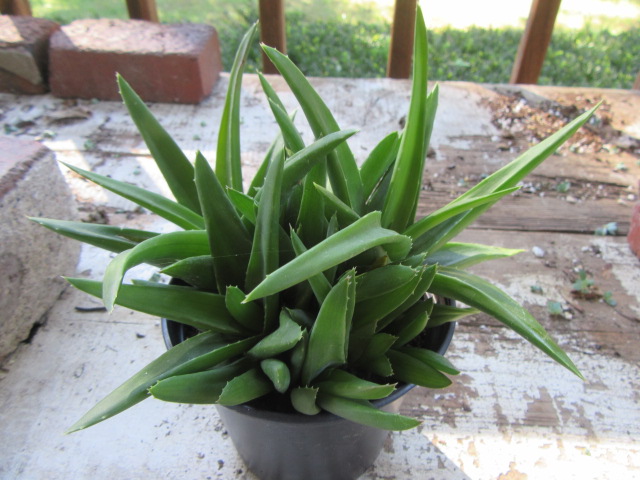 The x Alworthia ‘Black Gem’ has been a delightful little plant for sure. It is a hybrid of Aloe speciosa and Haworthia cymbiformis. It has grown A LOT and is currently 4 1/2″ tall x 8″ wide. I notice it definitely needs to be repotted. It was 3 1/2” tall x 6 1/8” when I brought it home from Wildwood Greenhouse in May. It appears this plant will be quite a clumper…

The Aristaloe aristata (Lace Aloe) is always bright and beautiful! It has always been happy and carefree since I brought it home from Wal-Mart in March 2018. It was originally named Aloe aristata, but phylogenetic studies show the Aloe genus is polyphyletic and this unusual species IS NOT an Aloe. It is closely related to the Astrolabes and to the four Robustipedunculares species of Haworthia. Because its genetics are unique, this species was put a new genus of its own. It was 2 3/4” tall x 4 1/2” wide when I brought it home and now measures 4 1/2″ tall x 8 1/4″ wide. This plant grew quite a lot over last winter inside, so I think I need to give it a larger pot…

Well, that’s it for the A’s. I hope you enjoyed this page as much as I have enjoyed these plants as companions.

Until next time, take care and be safe!