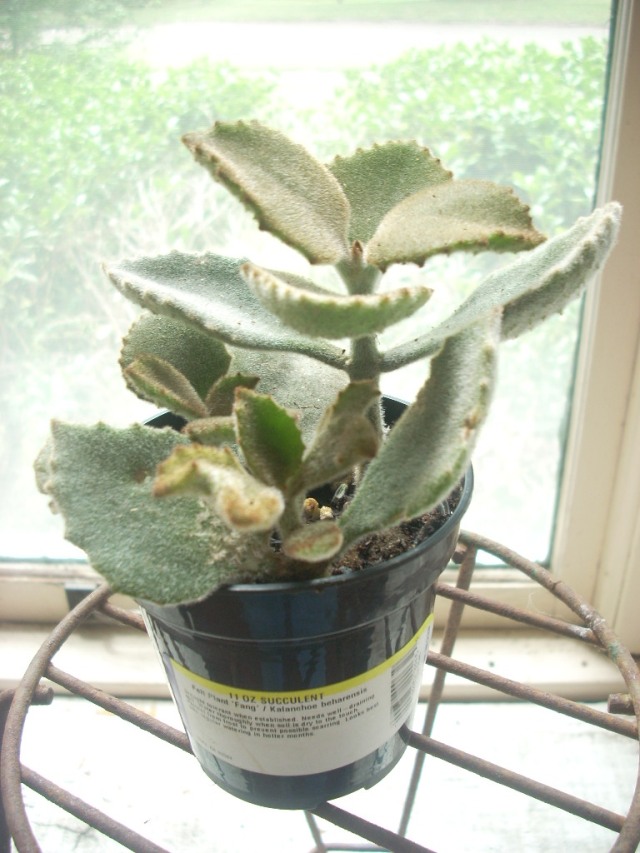 Kalanchoe Adans. is the correct and accepted scientific name for this genus of flowering plants in the Crassulaceae Family. The genus was named and described by Michel Adanson in Familles des Plantes in 1763.

As of 1/20/19 when I updated this page, Plants of the World Online currently lists 156 accepted species in the Kalanchoe genus. 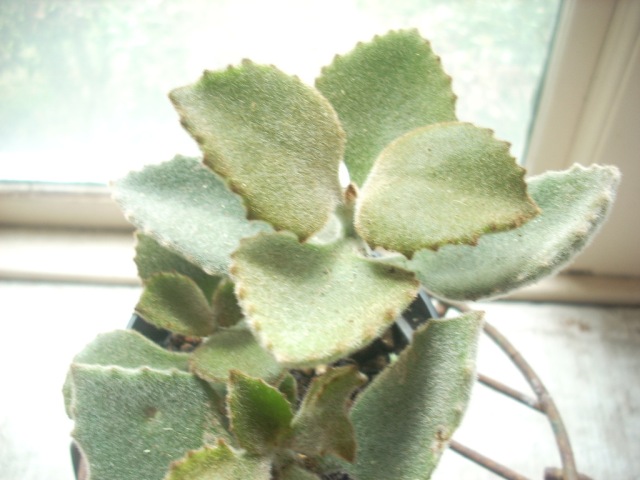 I bought my Kalanchoe beharensis cv. ‘Fang’ on August 25, 2012, from Lowe’s in Greenville, Mississippi while living at the mansion in Leland. There were three plants in the pot. The plant was grown by Altman Plants and the label said:

Kalanchoe ‘Fang’ is an upright slow-growing succulent to 2 to 3 feet tall and has 3 to 4 inch long velvety leaves that are unlobed but have dentations along the entire margin. The leaves are a golden-brown color when grown in the sun or a silvery-gray in the shade and have dark brown spots along the leaf margin and hooked tubercles across the upper half of the backsides of the leaves. These fang-like tubercles, which give the cultivar its name are most noticeable up the upwardly inclined new leaves. Grow in sun or bright shade in well-drained soil or pot. Hardy to around 25°F. 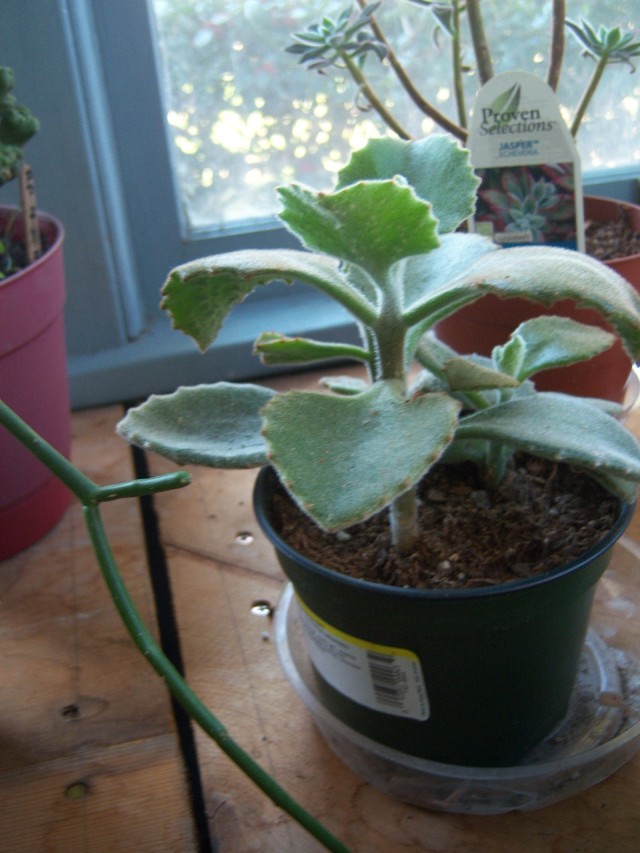 According to information online, it seems the “true origin” of ‘Fang’ may be unknown. It is similar to an old Hummel hybrid called ‘Rose Leaf’ which was a cross between Kalanchoe beharensis x Kalanchoe tomentosa. “Rose Leaf’ didn’t have the fangs, though, so they say ‘Fang’ may be a sport. So how did this strange Kalanchoe come up with those tubercles, protuberances, fangs, or whatever you call them? 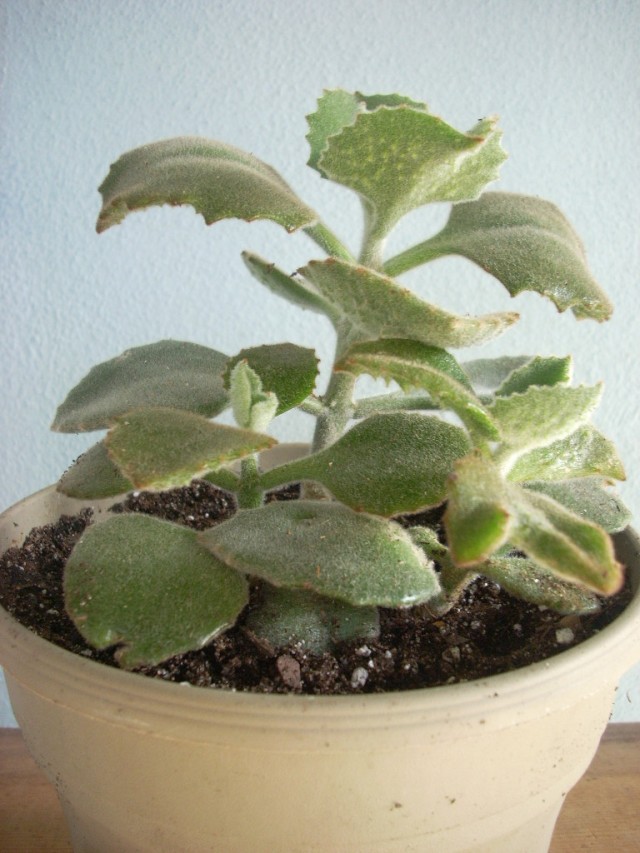 USEFUL INFORMATION:
Family: Crassulaceae
Origin: Ummm… Not sure. Possibly a hybrid.
Zones: USDA Zones 9b-11 (25 to 40° F)
Size: 2-3’ and even up to 6’
Light: Sun to part shade
Soil: Fast-draining potting mix with extra grit and pumice or perlite.
Water: Average water needs during the growing period, not much during the winter. Always allow the soil to dry between watering.
Propagation: Easily roots with leaf cuttings 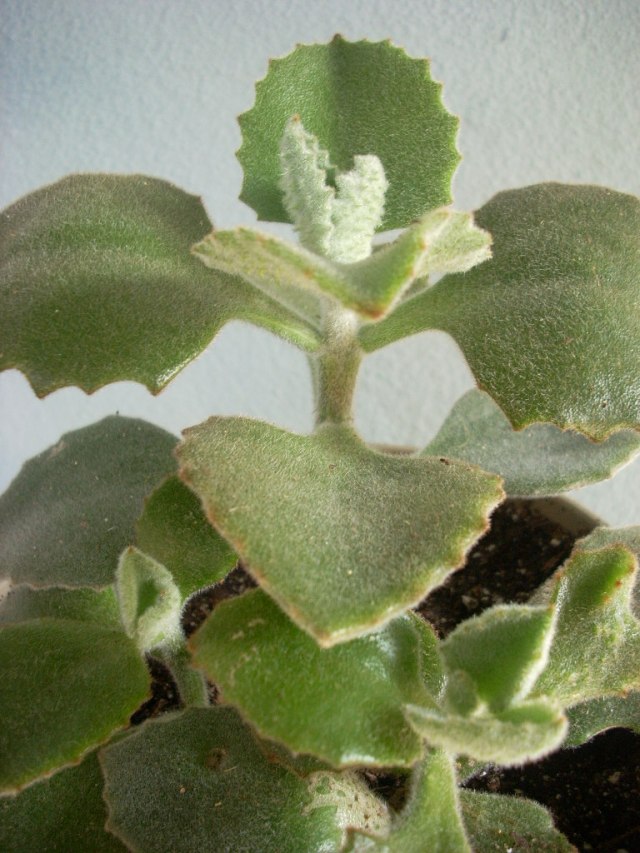 The leaves of this plant remind me of those old mohair seats in old cars and old theater seats. Remember those? 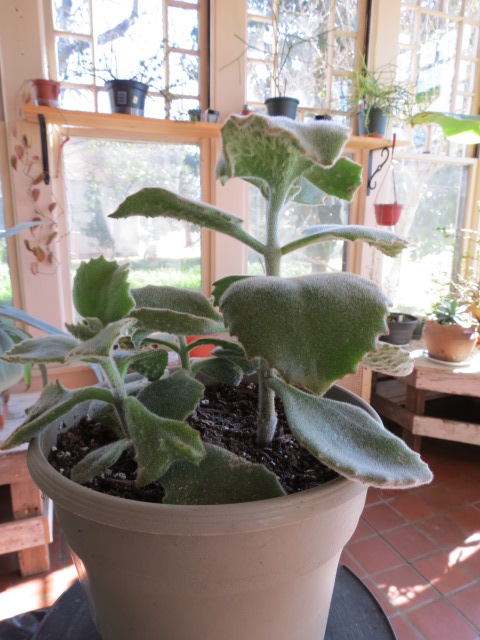 One of the plants in the pot grew much faster than the other two. 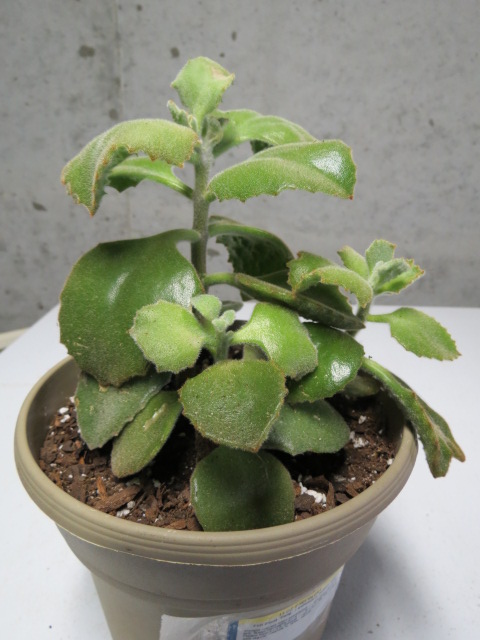 I sold the mansion in Mississippi and moved back to the family farm in mid-Missouri in February 2013. Mom and dad had both been ill and dad asked me to move back to help with mom and the farm. Mom was 81 and dad was 82 at the time. I told him that I had a lot of plants and he just said, “Yeah”. He is very hard of hearing and I don’t think he quite understood that a lot of them had to come with me. I gave up several hundred pots but brought most of my succulents, several perennials, the Colocasia and most of the Alocasia, and several others I didn’t want to leave behind. The temperature was in the 30’s the whole 8-9 hour trip. Most of my plants were in the back of a trailer but some were in the vehicle. A good friend helped me move and there was a lot of snow on the ground when we arrived at the farm. We moved the plants to the basement because I had no idea what to do with them.

When spring finally arrived, I moved the plants outside. I had brought several tables I had built in Mississippi and put them next to one of dad’s sheds. It became the perfect spot for my potted plants. 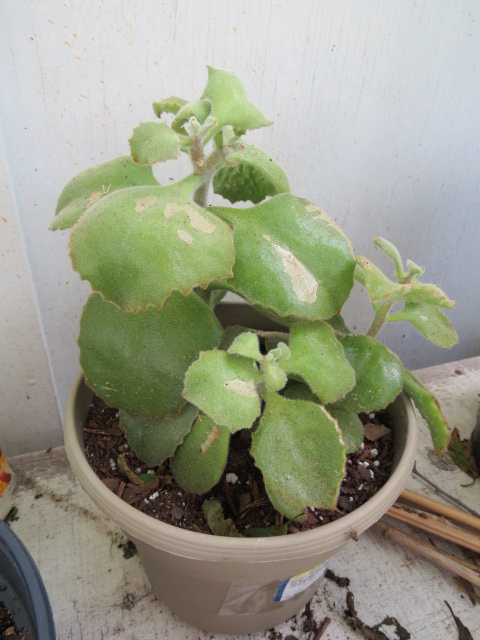 The scarring is from what I am not sure. Could they be from water on the leaves in the sun? Maybe from insects? Maybe from getting too cold during the trip to Missouri in 30-degree temperatures? 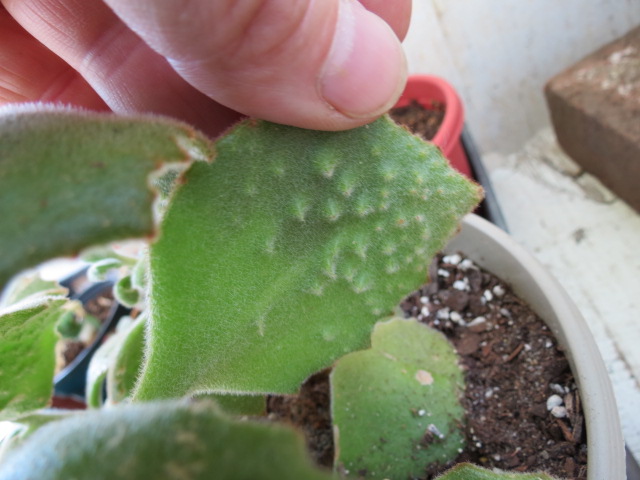 That is just plain odd! 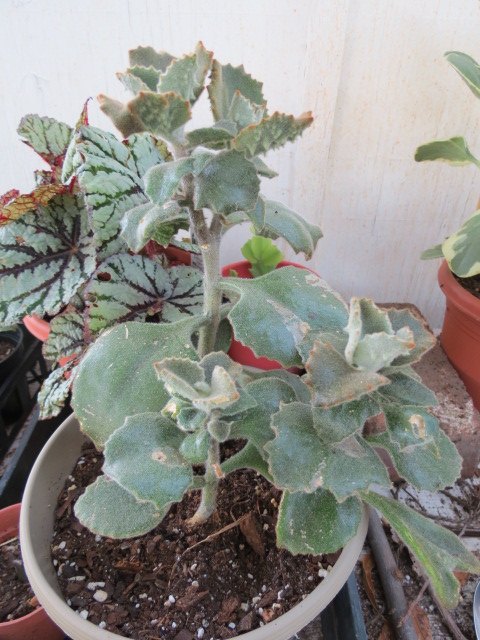 That one plant has always outgrown the other two and is branching out. Despite the appearance, this plant always did pretty well. 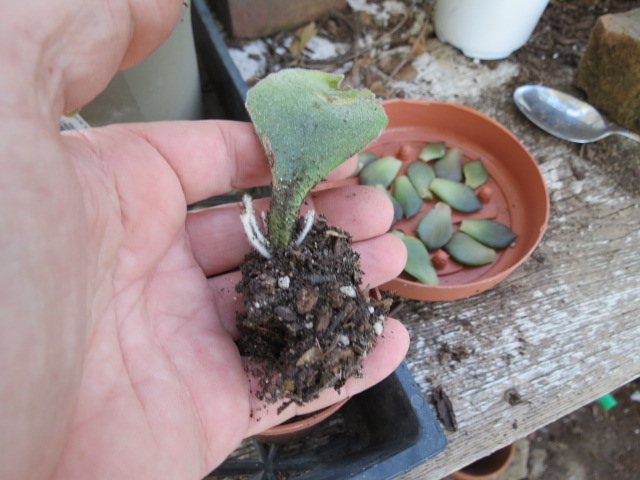 I took several leaf cuttings which easily take root. It was odd the leaves actually grew multiple plants. The other leaf cuttings in the photo were from an Echeveria.

As cooler weather came I had to move the plants back inside for the winter. There was a table in my bedroom so I put most of the succulents on it and on the kitchen windowsill. 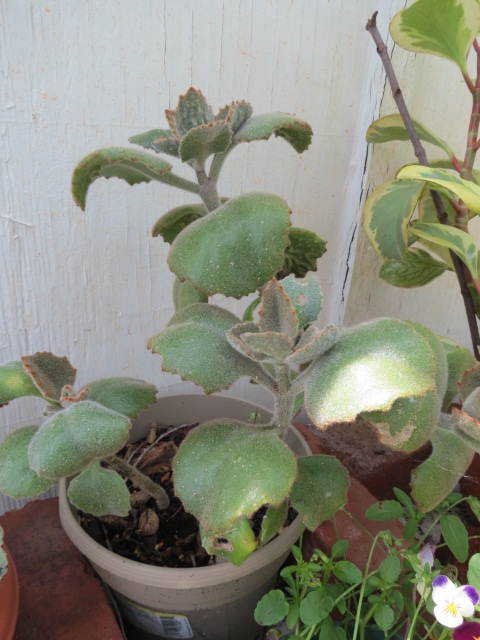 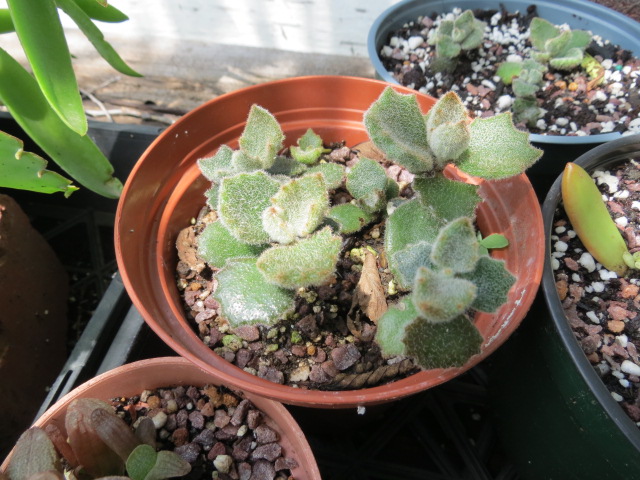 Temperature and light have a lot to do with the color of the leaves. 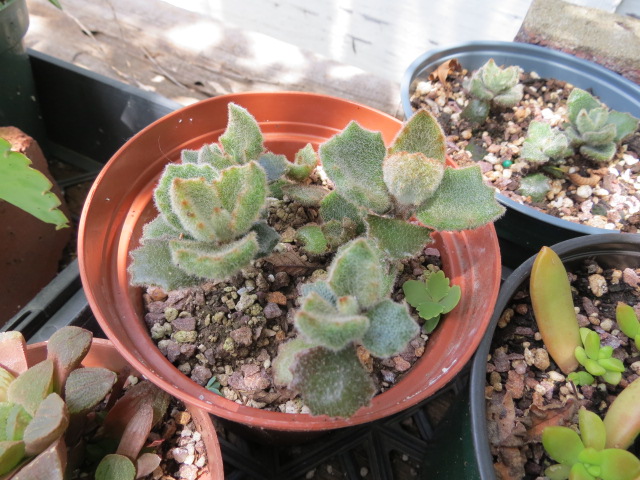 All the leaf cuttings I took in 2013 did very well. The Bryophylum/Kalanchoe daigremontiana babies (Mother of Thousands) were also in several pots.

Unfortunately, I gave up most of my succulents shortly after the above photo was taken. I have started rebuilding my collection but I haven’t bought another Kalanchoe beharensis ‘Fang’ yet. Someday…

I hope you enjoyed this page. If you have any comments, questions or suggestions, I would like to hear from you. You can check out the links below for further reading. Please leave a “like” if you have visited this page. It helps us bloggers stay motivated. 🙂