Kalanchoe marmorata Baker is the correct and accepted scientific name for this species of Kalanchoe. It was named and described by John Gilbert Baker in Gardener’s Chronicle & Agricultural Gazette in 1892. 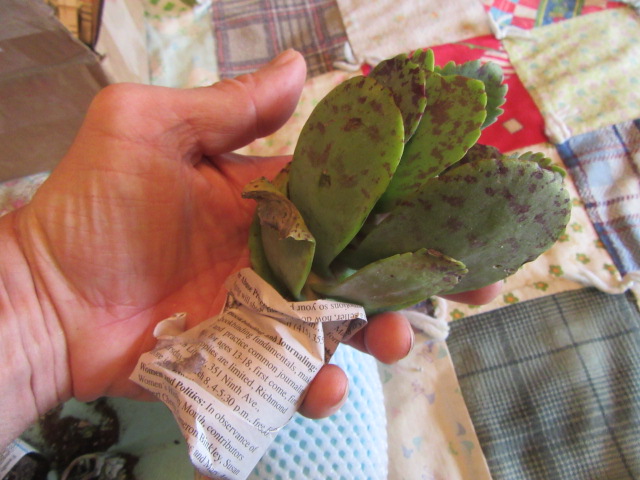 I bought this nice Kalanchoe marmorata from Elizabeth Li through the Facebook group Cheap Cactus and Succulents on April 6, 2018. I had selected a Sedum spathulifolium subsp. pruinosum ‘Cape Blanco’ and she said she had other plants. Most of what she had were really nice Echeveria. Since I have problems with some Echeveria species during the winter, I chose this Kalanchoe marmorata. She shipped the plants from California on Monday the 9th and they arrived on Friday the 13th. Both plants arrived safe and sound and were well-rooted.

The Kalanchoe marmorata has very thick leaves, kind of rubbery, with brownish-purple blotches. The leaves have a weird sticky feeling that is hard to explain. Common names include Penwiper Plant, Pen Wiper Plant, Spotted Kalanchoe, Penwiper, and Baby Penwiper. They are native to West and Central Africa where they grow up to 48″ tall but in pots, they normally grow to about 16″.

*I always did pretty well with 2 parts good potting soil (such as Miracle Grow or Schultz) with 1 prt chicken grit and 1 part perlite. I had been reading where cactus and succulent enthusiasts were using pumice instead. I ordered a bag from General Pumice online last fall and mixed it about 50/50 with potting soil. I have been having very good results.

Since I just bought this plant I don’t have many personal experiences to share. I went to the Llifle (Encyclopedia of Living Forms) website for more information.

Llifle says, “This is a very healthy plant and easy to grow. It needs a fast-draining mix. Keep it where it is bright, sunny, warm and airy but protect from mid-day sun. Water well during the summer with dry periods between watering. During the winter, keep them rather dry, not completely. The leaves become redder with the cool nights of the winter, but will need protection from the cold during hard freezes.” Somewhat edited…

They also say the Kalanchoe marmorata produces starry white, four-petalled flowers, sometimes tinged with pink, “profusely from the end of winter to early spring.” They are short day plants blooming when they have less than 12 hours of light per day. 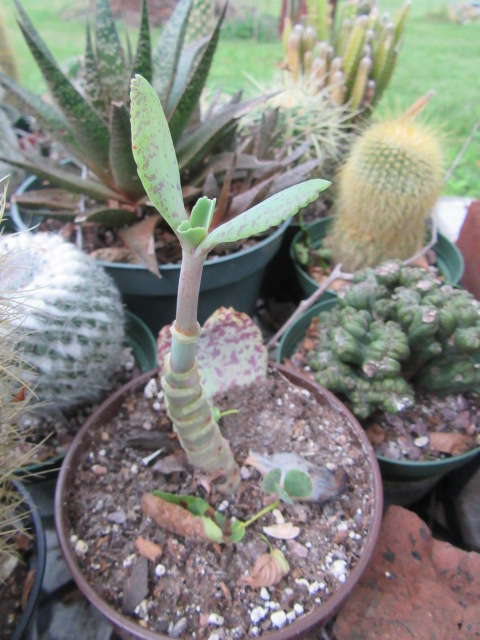 By the time warmer temperatures arrived and stayed, I moved all the potted plants outside for the summer. By that time, most of the leaves had fallen off of the Kalanchoe marmorata. I knew it would be OK, though, because it had two new leaves and an offset.

On July 4 I moved most of my potted plants to the front and back porch. I had a Japanese Beetle invasion which completely changed the light where the plant tables had been (under a Chinese Elm Tree the beetles loved).

The Kalanchoe marmorata definitely seems to be out of the woods now. It is doing much better and had 12 leaves when the above photo was taken on August 29. The leaves grow in groups of four. 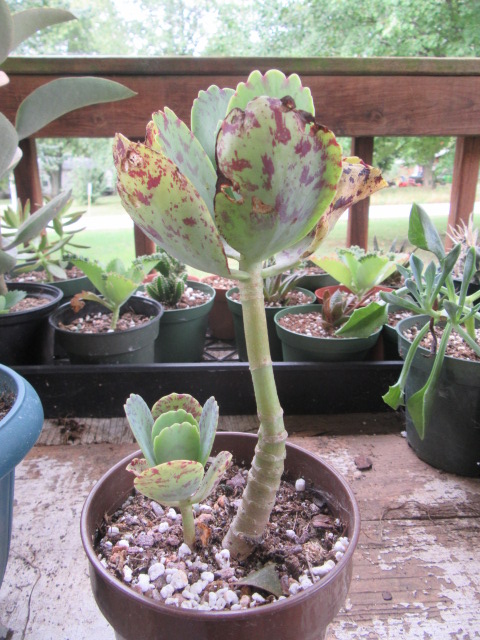 I had to move the potted plants inside for the winter on October 10 because an “F” was in the forecast. I photograph all the plants as I move them inside and measure the cactus and some of the succulents. Kalanchoe, for the most part, needs to be “regrown” from time to time so it is no point to measure some of them. At this point, I think this plant has been through enough to be cutting its stem and regrowing it. Maybe next year 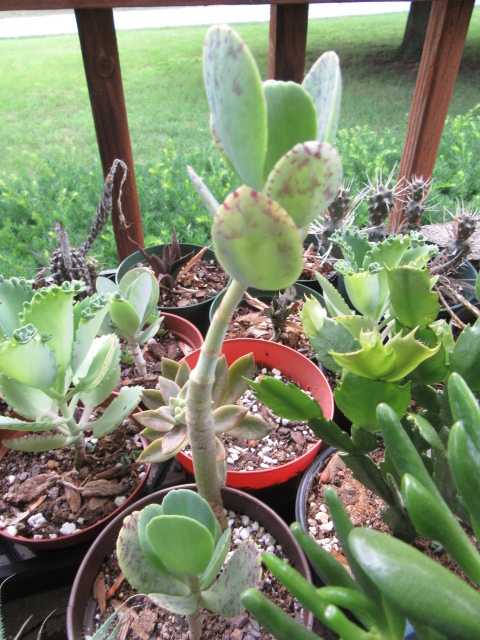 The Kalanchoe marmorata survived the winter and had been on the front porch for over a month when the above photo was taken.

I had to move the potted plants inside for the winter on October 11 because aN “F” was in the forecast. The Kalanchoe marmorata (Penwiper Plant) and I have made an agreement. As long as it doesn’t die I will keep doing the best I can. I was fairly busing during the summer so I was sometimes neglectful of the plants. As the above photo shows, at one point I cut the stem of the main plant and stuck it in the same pot. The old stem continued growing new leaves and offsets along the stem. I put the offset from before in its own pot.

I repotted a few cactus and succulents after I moved the plants inside. I think Fall is a good time to repot cactus and succulents so their soil will stay nice and loose over the winter. The original plant died after I moved the plants inside. I also put the cutting deeper into the soil in its own pot. The first offset I removed it doing fine, but I noticed it wasn’t even in the potting soil when I took this photo. Hmmm…

So, once again, I am hoping the Kalanchoe marmorata survives the winter. Even though I have A LOT of plants that do well, a few have their own personalities to get accustomed to. This seems to be one of them. Maybe your experience with this species is different so please leave a comment if you have anything to share.

I had to move the potted plants inside for the winter on October 15. As always, I take photographs and measurements as I bring them inside. The Kalanchoe marmorata continues to survive, even though weirdly. The plant grown from the stem I cut off keeps getting taller while the one from the offset stays short…

It still won’t grow an abundance of leaves like the plant was when I first got it. I will figure this plant out yet!

I will continue adding more photos and information as long as it likes me.