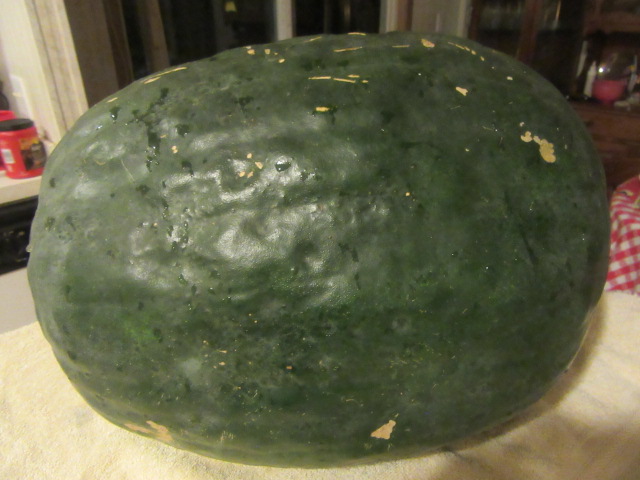 Hello everyone! I hope this post finds you well. So, how many rules can a ‘Black Diamond’ Watermelon break?

Hmmm… Information online says says “Black Diamond’s’ reach maturity from90-95 days. OK, so maybe I don’t know exactly when they came up but I know they were a few inches tall on June 7 because I have a photo to prove it…

Well, no one ever said how hard to scratch… 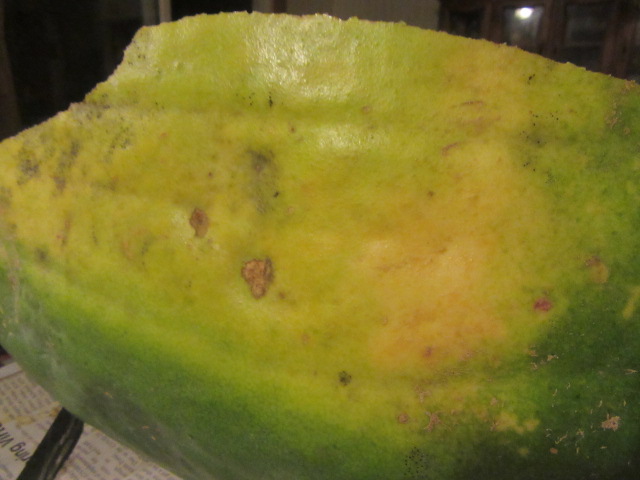 Well… It has only been light green, and tonight it was kind of dark and I thought it was more yellow. One of the bigger melons like this one has a white belly, however, I know it isn’t as old as this one. The flower didn’t make a melon for a couple of weeks after the one here. Besides that, there are smaller melons with white and yellow bellies and they can’t possibly be ready.

HA! Information online says when the tendrils are brown they are as ripe as they will get BUT… For some, including the ‘Black Diamond’, that could signal when they are beginning to ripen. The tendrils opposite the stems where the watermelons are attached have been brown for weeks and most of them have completely fallen off. One thing for sure, there is a lot of difference  and days between “ripe” and “beginning to ripen.”

A few days ago I was talking to this older guy at a store in town about the watermelons. He said, “Don’t you know how to tell if a watermelon is ripe?” I gave him a list and he gave me a rather disgusted look almost as if I were an idiot. He said, “When the end of it turns brown or black it is ripe.” He further said you can also tell by thumping on it. Well, for his information I have been thumping on watermelons all my life. Well, maybe not all my life… I had to learn how to walk first. OK, so maybe we can add that one to the rules.

Now, after watching everyone thump on watermelons since I was a kid, I always figured it was just the right thing to do. Tonight, I even thumped on the one that was rotting and it sounded like an old flat tire or maybe my stomach when I have eaten too much. Well, so did the one I just cut, and the bigger melons all sound like an old flat tire… When I actually get a ripe melon I will remember what it sounds like.

Wait until I see George! He will ask “Was it black?” I will say, “You said black OR brown. What if it is black and brown?”

I call my friend with the scale again and asked if I could borrow it. She said, “You didn’t?” My reply was, “NO, but I am going to.” SO, I went out and did it and darn near dropped it on way to the water hydrant. I washed it off and my pants almost fell down by the time I got it inside the house. I put it on a towel and went to get the scales. For the life of me I can’t find my own. It’s amazing how things aren’t where they always were since my son was here. It has always been in the cabinet in the main bathroom… I know he used it before because I saw him do it… I would ask him what he did with it but he has been gone for a while and I haven’t heard from him in several weeks.

SO, I waited for 90 days. I have spent weeks of thumping, scratching, and checking the bottoms on several of the watermelons WAITING impatiently. Well, as you know, I wasn’t patient the first time. Last week I picked one that had a few holes in the bottom and was starting to rot. It weighed 23 pounds and wasn’t ripe either. Then, there was a smaller one whos stem turned brown and fell off. I cut it open and it wasn’t ripe… One small melon literally exploded and I saw another one tonight that had rotted. Both of those weighed maybe 10 pounds and had just somehow turned to yellow mush inside.

A lot of the vines are starting to die now because it is just that time. The vines and stems attached to the watermelons, besides that one, are still green even though there may be no leaves on the vines. With no leaves, many of the watermelons are turning yellow on top from the sun.

This particular melon has been a shiny dark green from the beginning while most of them have a bluish-green color with a chalky appearance. This one also has a lot of lumps…

SOOOO, what did it look like on the inside? 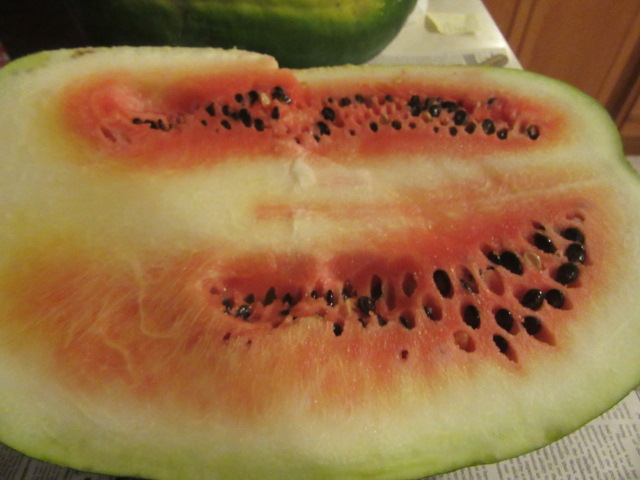 Hmmm… They always say practice makes perfect but I am not sure if this is progress or not. The one with the holes in the bottom was riper than this one… 38 pounds, almost 18″ long, and about 38″ around. Even though it isn’t ripe I had a few bites. It was sweet and juicy but definitely not quite there…

But, I will learn. By the time I get a ripe watermelon, I will know…  With the cool temps and rain we have been having off and on, I hope they don’t rot before they ripen.

I put the other watermelons on the porch before I took them to the chickens the next day. I found out butterflies like watermelon… Later on, I spotted a hummingbird taking interest but I never saw it eat.  Somehow a few very large holes appeared.

Well, that’s it for this one. Until next time, take care, be safe, stay positive, and do your best to GET DIRTY!