Mesembryanthemum cordifolium L.f. is once again the correct and accepted name of this plant. It was named and described by Carl Linnaeus the Younger in Supplementum Plantarum Systematis Vegetabilium… in 1782.

The genus, Mesembryanthemum L., was named and described as such by Carl von Linnaeus in the first edition of Species Plantarum in 1753.

Ummm… For those of you who don’t know Carl Linneaus (who went by several names depending on where he lived) is the father of Carl Linnaeus the Younger. I think this is the only species I have written about where the father named the genus and the son named the species…

Plants of the World Online by Kew listed 108 accepted species in the genus when I updated this page on June 27, 2019. The Mesembryanthemum genus has had species moved in and out and back again for quite some time. My contact with Kew, who is pretty high on the ladder, says he believes it is stable now. It is a member of the plant family Aizoaceae with 199 genera. Those numbers could change as updates are made.

The synonym, Aptenia cordifolia (L.f.) Schwantes was named and described as such by Martin Heinrich Gustav Schwantes in Gartenflora in 1928.

The genus, Aptenia N.E.Brown, was named and described by Nicholas Edward Brown in Gardener’s Chronicle in 1925.

Many plant names are changing because there are so many plants with multiple scientific names and being misplaced. It is a continual work in progress. Some databases and websites don’t update that often and the industry sells mislabeled plants all the time. How would the rest of the world know when plant names change anyway?

I found A LOT of these plants at Wagler’s Greenhouse on May 1, 2019. The plants were unlabeled so I asked Mrs. Wagler what they were. She said they were an Ice Plant. When I think of an Ice plant, I think of the Delosperma cooperi. I decided to bring one home.

When I came home I took photos and went online and typed in “variegated Ice Plant” and found Aptenia cordifolia f. variegata. The flowers of my plant seemed pretty red at the greenhouse but Aptenia cordifolia flowers aren’t supposed to be red. Normally their flowers are bright pink to magenta-purple but there may be white mutations.

A couple of the other local greenhouses had quite a few hanging baskets of these plants but none in singles.

The flower of the plant I brought home was closed up when I took the first photos on May 1. I didn’t get a photo of the flower until May 6. Their flowers only open certain times of the day and I prefer taking mine in the late afternoon/early evening… After this one is already closed. Unlike the Delosperma I have grown before, these plant’s flowers seem stemless and just kind of stick right out of the end of the plant. As you can see from the photo, the flower isn’t exactly red.

The plant I brought home was a single stem with a few branches. When I put it in a larger pot I cut a few of the stems and placed them around the pot so it would branch out evenly around the pot. That would look much better since this is a trailing plant and in a pot by itself. 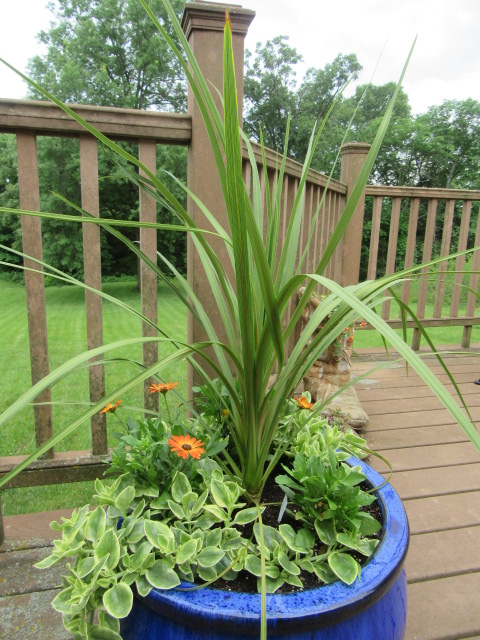 Mesembryanthemum cordifolium f. variegata in one of the planters I arranged at a friends home. This photo was taken on 6-4-19, #582-30.

A friend of mine asked me to do his planters on his deck and around the house. I went back to Wagler’s Greenhouse and bought several of the Mesembryanthemum cordifolium f. variegata to use as a trailing plant. I took cuttings of several stems and put them in another planter.

Hmmm… I am not going to ask what first comes to your mind when you see this photo… Nature definitely has a sense of humor. I have never seen a bud form on any plant like this before.

This flower is getting ready to close when the above photo was taken at 4:48 PM.

It is almost like the plant is giving birth… 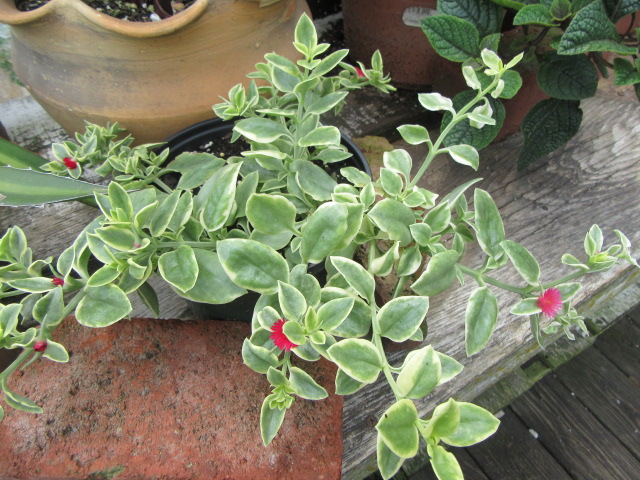 Well, I must admit I think this plant and I will become great companions. I seem to take a lot of photos of it.

I am not a fan of pink, but sometimes I make exceptions. I will just say the flowers are magenta.

I am new to this plant and I will continue adding more photos and information as time goes by.

I hope you enjoyed this page and maybe found it useful. If you have any comments, questions or suggestions, I would like to hear from you. Please click on “like” if you visited this page. It helps us bloggers stay motivated. 🙂 You can check out the links below for further reading. The links take you directly to the genus and species of this plant. Remember, the websites may refer to Mesembryanthemum cordifolium or Aptenia cordifolia…