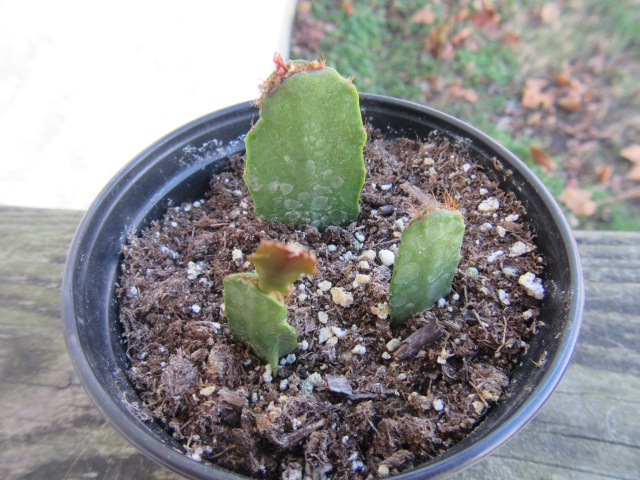 Schlumbergera gaertneri (Regel) Britton & Rose is the correct and accepted scientific name for this species of Schlumbergera. It was named and described as such by Nathaniel Lord Britton and Joseph Nelson Rose in Contributions from the United States National Herbarium (Smithsonian Institution) in 1913. It was first named and described as Epiphyllum russellianum var. gaertneri by Eduard August von Regel in Gartenflora in 1884.

There is information online about the Easter Cactus that sometimes still goes by the scientific name Hatiora gaertneri. Hatiora gaertneri (Regel) Barthlott was named and described as such by Wilhelm A. Barthlott in Bradleya in 1987. It is determined this name is a synonym of Schlumbergera gaertneri.

The genus, Schlumbergera Lem., was named and described as such by (Antione) Charles Lemaire in Revue Horticole in 1858.

As of 11-19-20 when I am updating this page, Plants of the World Online by Kew lists 9 accepted species in the Schlumbergera genus. It is a member of the Cactaceae Family with 144 genera. The numbers could change as updates are made. 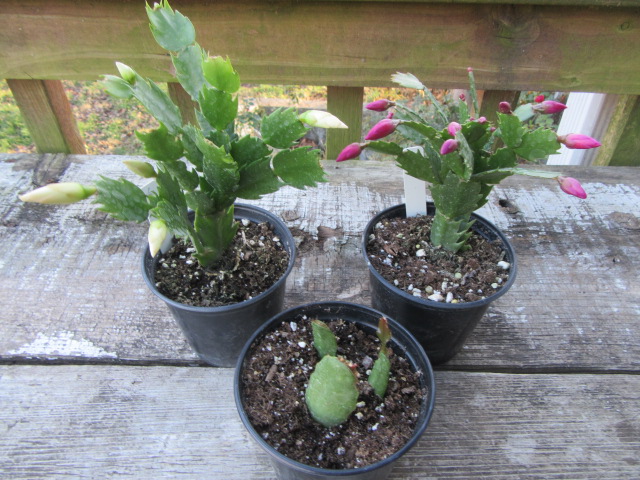 I went to Wagler’s Greenhouse on November 17 (2020) to see if she had any Schlumbergera truncata available. Last year she kept selling out but I managed to find one that was supposed to have peach flowers. It turned out to be pink, so I wanted to see if she had any peach this fall. I found a red-flowered plant earlier but it didn’t bloom. I was glad to see she had quite a selection of red, yellow, and pink but no peach. I picked out a yellow and another red-flowered plant (actually, there are two plants in the red pot). Then she told me she had an Easter Cactus in the back she had taken cuttings from and I could have one if I wanted. She said it has red flowers but they are different… Of course, I had to have a look. I had done research about the Schlumbergera truncata and already found out the difference between Thanksgiving, Christmas, and Easter Cactus.

SO, I followed her back to where the Easter Cactus was and she didn’t have many. Well, the parent plant wasn’t that big either because she had taken segments off it if. The woes of owning a greenhouse as a business… As it says online, the segments of these were indeed different and they had wavy margins and no “teeth”. SO, her Easter Cactus are indeed Schlumbergera gaertneri. She handed me a nice pot with three cuttings and I gladly accepted. We trade plants, so they cost me nothing. 🙂 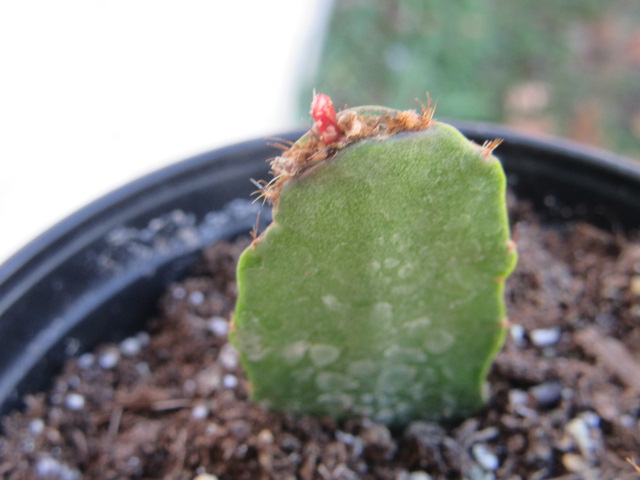 Well, to say the least, I was pretty excited to have a pot of three actual Schlumbergera gaertneri. They may be common where you live at Easter time, but I have never seen them in my life and I am almost 60… I took close-ups of all three cuttings for this page the day after I brought them home. I took more photos of the Schlumbergera truncata as well. 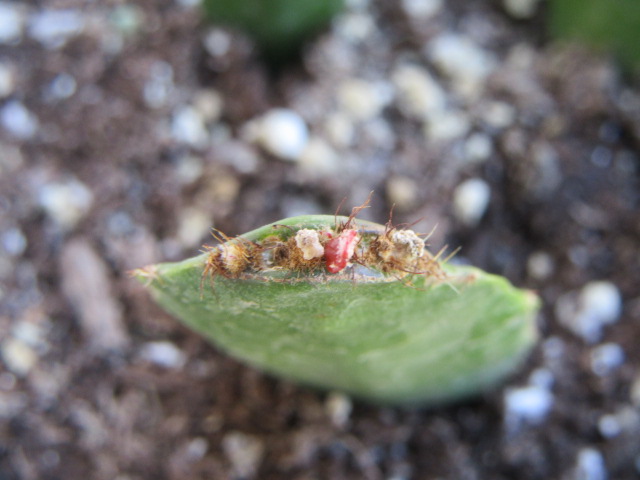 The cladodes, or segments, of Schlumbergera gaertneri are thicker than those of Schlumbergera truncata. In the center of the top of the segment is an areola where new segments and flowers emerge. It has wool and deciduous bristles. 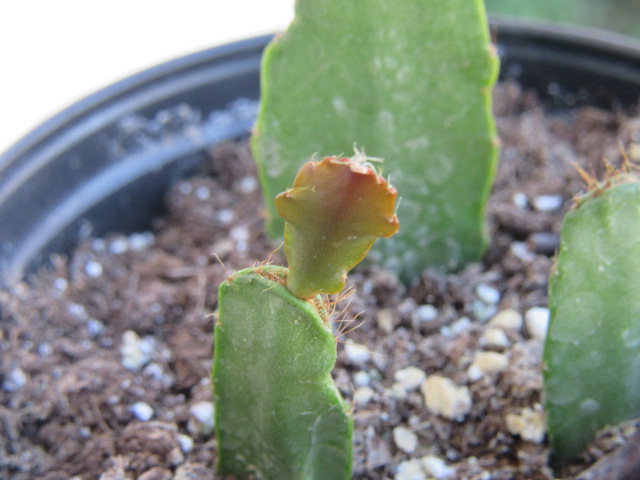 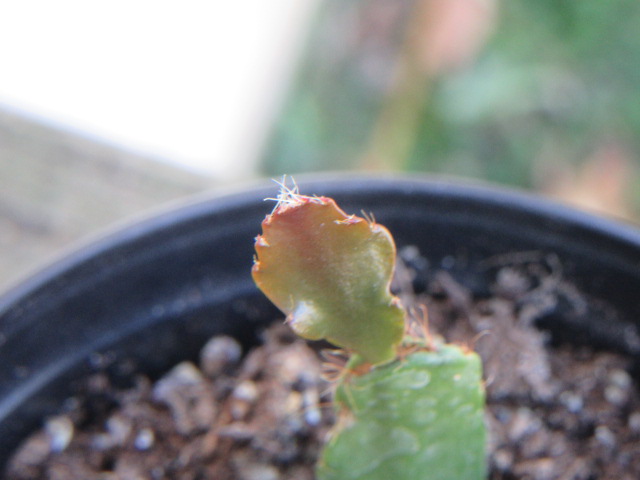 It has little white hairs… 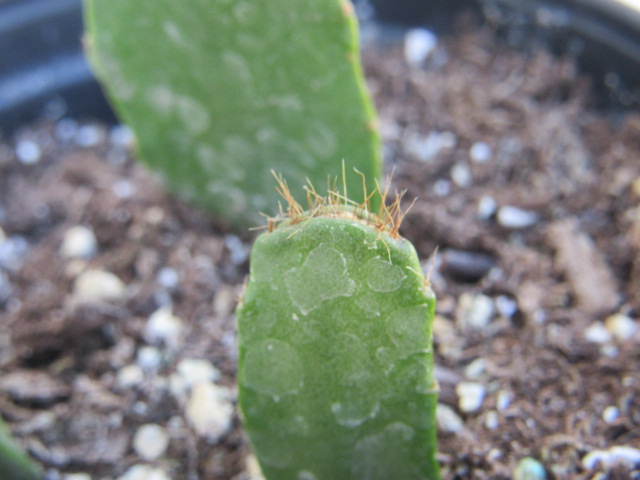 The smallest of the three cuttings has a lot of brown bristles coming from the areola. 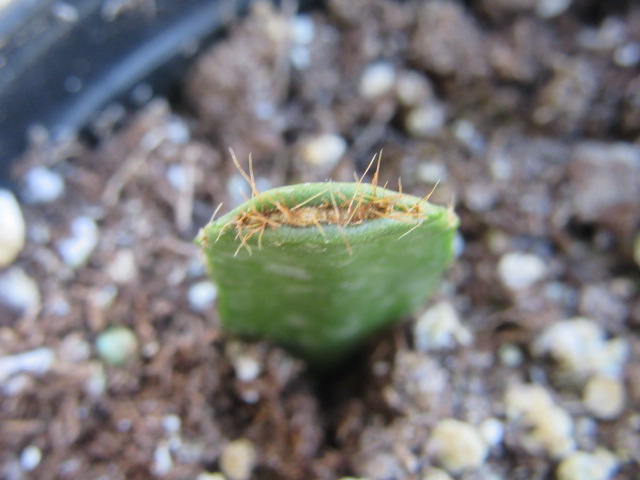 Looks kind of weird but sometimes nature is definitely weird… 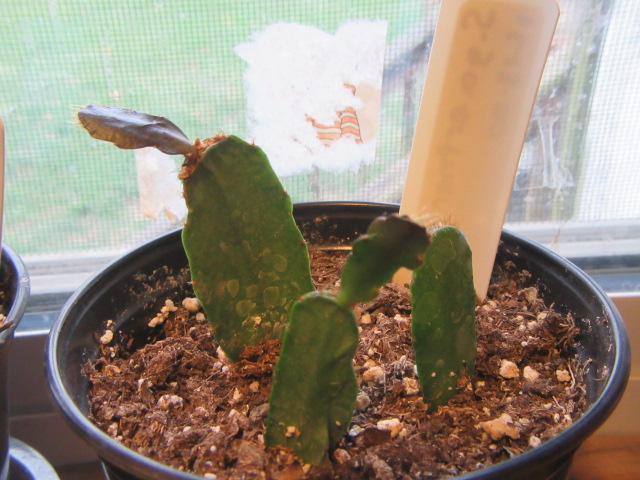 By December 13, the new segments on the Schlumbergera gaertneri has started growing much better. They looked a little strange for a while because they were almost black…

The Schlumbergera gaertneri cuttings have had their ups and downs. One died and the other two seem to be hanging in there. 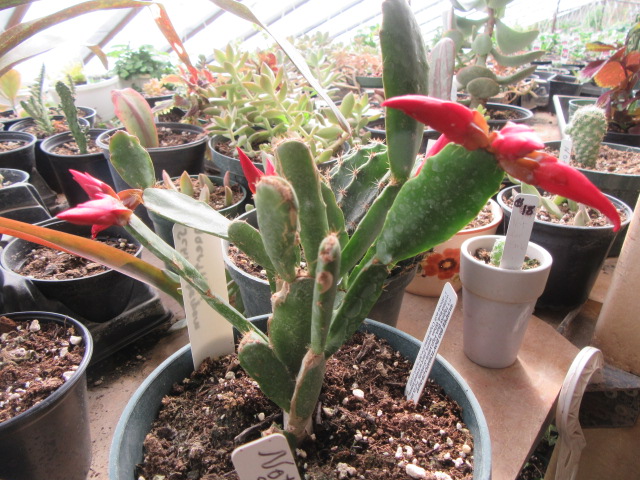 I go out to Wagler’s Greenhouse off and on because you never know what you will find. Earlier in March, her Schlumbergera gaertneri had buds so I went back on March 20 to see if they had opened yet. 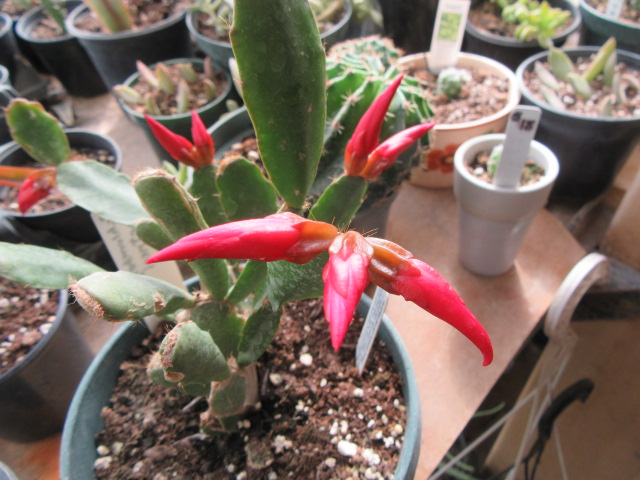 The buds were getting close to opening, but not quite there yet. I told her about the difficulties the cuttings had she gave me, so she gave me another pot with two cuttings. Her plant would be much bigger but she had taken the cuttings before. I guess that’s what happens when you are in the plant business. 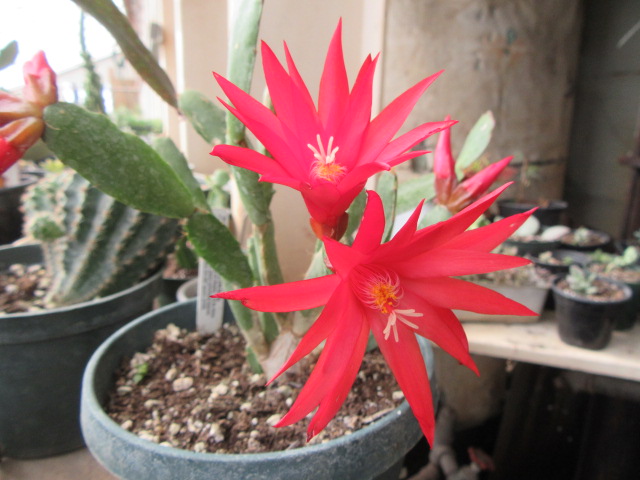 I went back several times during the week and on April 2, Good Friday, two of the flowers had opened. 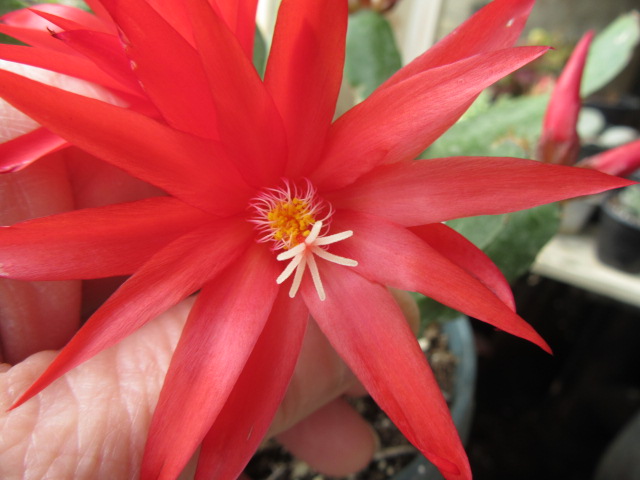 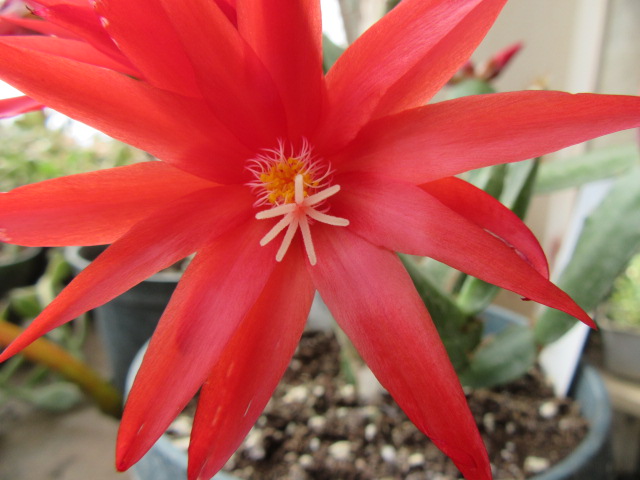 The flowers will last several days and there are still a few buds that haven’t opened. Hopefully, my cuttings will survive and do well so they can flower in Easter 2022.

USEFUL INFORMATION:
Family: Cactaceae
Origin: Southeastern Brazil
Zones: USDA Zones 10b-11 (35 to 40° F)
Size: 12-24” or thereabouts… Not sure since mine is new.
*Light: Light to part shade. Never in full sun.
**Soil: Well-drained potting soil. These plants grow in trees and on rocks in their native habitat so they may prefer a mix similar to other epiphytic plants such as bromeliads and orchids. A 50/50 mix of Miracle Grow Potting Soil and Pumice would be great which is what I use. You can find pumice online at General Pumice
***Water: Water when soil is almost dry. Prefers consistently damp soil, not wet, when flowering. Water less often during the winter.

***Water: Regular watering during the summer, allowing soil to dry between waterings. Some sites say not to let the soil completely dry out. During flowering, you will want to keep the soil moist but not wet. After flowering, some advise to hold off on watering for a couple of months. Never let your Schlumbergera sit in a saucer with water (like after watering).

I can honestly tell you I have let my Schlumbergera truncata potting soil get dry multiple of times throughout the year with no negative effects. The leaves shrivel a little but they always perk back up after I water them. They are very drought tolerant and I think more so than being overwatered.

I am very glad I have found this species of Schlumbergera and I will be adding more photos and information as time goes by.

There is plenty online about growing Schlumbergera as well as many videos on Youtube. They are not hard to grow and only have a few basic rules to follow.

There isn’t much online about this species at the moment except websites selling the plant. I did find a fairly good one but some of the information was incorrect and the scientific names were way out of date. I will check off and or, or at least when I make my updates, to see if there is any more information online. Some websites are using the names Hatiora gaertneri, Rhipsalis gaertneri, or even Epiphyllum gaertneri. Those are former accepted names but DNA testing has led to the species being placed in the Schlumbergera genus. It doesn’t matter what other websites call them as long as the other information they provide is accurate and helpful. Scientific names of plants have been changing A LOT over the past several years because so many had multiple scientific names and there were a lot of disagreements. DNA (polygenetic) testing has solved a lot of mysteries and ended many arguments.

I hope you enjoyed this page and maybe found it useful. If you have any comments, questions, or suggestions, I would like to hear from you. Please click on “like” if you visited this page. It helps us bloggers stay motivated. 🙂 You can check out the links below for further reading. The links take you directly to the genus and species of this plant. Some sites may use a “former” name but it is still the same plant. If you see I have made an error, please leave a comment or email me at thebelmontroster@yahoo.com.