Hello everyone! I hope this post finds you well. The garden is doing GREAT and I must say the tomatoes are the best I have ever grown. I think I say that every time I write or talk about them. I harvested my first ripe tomato on July 13, which was a Rutgers. It was very good. 🙂 I still like the new way I am pruning and hanging them up and I also think the mulch has made a big difference. BUT, this post is about the kale so I better stop rambling. I started this post on July 7 and have updated the draft 18 times…

I did learn a new word while I was writing this post… Crucifers… In botany, it refers to plants whose flowers have four petals. I would have thought the information would say the worms in this post prefer members of the Brassicaceae Family, instead, they say they prefer crucifers. Hmmm… Well, that may be true because brassicas are apparently crucifers. I just never saw that word used before but I don’t get out much… 🙂

Interestingly enough, most of the butterflies in the garden are Pieris rapae also known as the Cabbage White. It is called other names such as Small Cabbage White, Cabbage Butterfly, or White Butterfly. It is a member of the white and yellows family Pieridae which consists of about 76 genera and 1,100 species mainly from tropical Africa and Asia. This species is found all across Europe, Asia, and North Africa. It was “accidentally” introduced into Quebec, Canada in the 1860’s and has now spread across North America…

I have seen this worm for many years and I always thought it was the larvae of the Cabbage White Butterfly. BUT, I have learned the error of my thinking. Do you see the way it arches its back? That means it is a lopper similar to inchworms (which are in a different family). Thanks to INaturalist, I found out these critters are the larvae of Trichoplusia ni, commonly known as the Cabbage Looper Moth. I have not seen any of the adults in the garden, but I have seen similar looking moths elsewhere. These caterpillars are called loopers because they don’t have the same amount of legs (or prolegs) as most other caterpillars. They only have 2-3 pairs on the hind end instead of the normal 5 pairs. When they crawl, they clasp with their front legs then draw up the hind end then clasp with the hind legs (prolegs). Then they reach out and grab with their front legs again. This gait is called looping because it arches it back into a loop when crawling.

I thought it was funny how they could be lying flat on the underside of a leaf until I started looking at it and taking photos. Then they would arch their back like they were trying to scare me off.

One very interesting thing about the adult is that they are migratory and are found across North America and Eurasia. According to information, over 160 plants can serve as hosts for this species but “crucifers” are preferred

This is the first year I have seen this critter but it doesn’t mean they haven’t always been around. Certain times of the day you may see no worms of any kind anywhere. This colorful member of the family Crambidae inhabits most of the eastern portion of the United States and can be found on all types of brassicas. The adult is a brownish moth and I have not seen any of them in the garden… I kind of think they do most of the damage to the kale which leads me to believe they have been here before and I just didn’t notice them. I always wondered how could so few very small cabbage worms do so much damage now I know…

This strange little critter is a member of the leafhopper family Cicadellidae with 26 species in the genus and is a North American native. I have seen a few of these on the kale although it is not necessarily on their menu. Although kale is not on the list, turnips, another member of the Brassicaceae family, is. I did see more on the okra today but I can’t tell what they are doing. They are odd critters for sure… They normally produce two generations per year and adults overwinter in grass and other dead plant material.

In numbers, leafhoppers can cause serious damage in a variety of ways. Several species of this genus are believed to be vectors of a few plant diseases. C. costalis is thought to be a vector of Pierce’s Disease Virus of grapes (in Georgia). 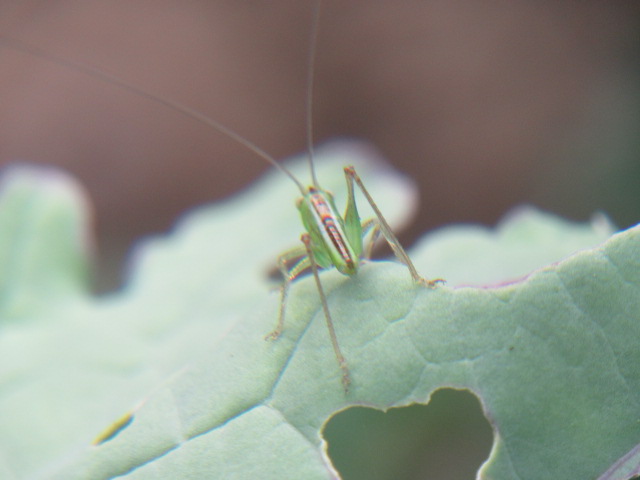 I always thought this critter was some kind of grasshopper, but when I uploaded the image on iNaturalist it said it was a Straight-Lanced Meadow Katydid (Conocephalus strictus). Information says this species normally feeds on grass but here it is on the kale… I couldn’t get a good photo because this guy, or gal, was a bit photo shy and was about ready to jump. I wonder if it made that hole?

I see a lot of BIG katydids here that I haven’t photographed to get a positive ID. I thought a katydid was a katydid but apparently not… There are several species found worldwide that look a lot alike. 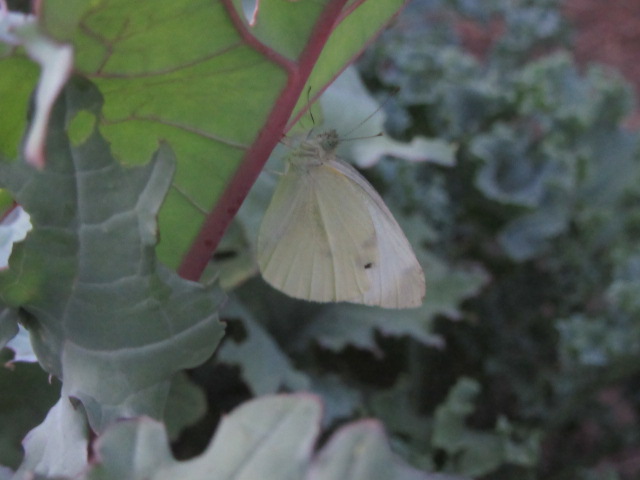 When I work in the garden in the early evening the butterflies and worms seem to be hiding. I was working in the watermelons when I spotted this Cabbage White Butterfly flying around the kale. SO, I ran to where it was to get a photo. It landed under a kale leaf then flew around a bit more but went back to the same spot. It did this several times before it finally decided to stay put. I guess this is where it will spend the night…

I have been noticing these strange varmints on the Asparagus. One day I stopped briefly to look at one and it appeared almost slug-like. I was busy so I went on about my business and it was happy about that. I couldn’t see where it was doing any damage. Then later when I had the camera and magnifying glass I had a closer look. I touched it and then it did something strange… It pooped. I took the best photo I could, but these guys are VERY SMALL. I uploaded the photo on iNaturalist and it suggested Crioceris duodecimpunctata commonly known as the Spotted Asparagus Beetle. I have no idea how to pronounce the scientific name because Dave’s Garden didn’t have a pronunciation for it. Maybe cry-OH-ser-is DOO-dec-im punct-ata. 🙂 I think I will call it Cryogenus dudepooper. I didn’t see any adults on the Asparagus, but Sunday afternoon I was walking in the yard and this small reddish-orange beetle with black spots landed on my hand. It said, “Are you looking for me?” I told him I wasn’t at the moment because I didn’t have the camera. I asked him if he was lost then he flew off. It was a male because the females are a different color.

According to what I read, the larvae of the Spotted Asparagus Beetle only feeds on the berries. Well, they are going to get hungry because there are no berries on the asparagus at the moment… A few plants are just now beginning to flower… Apparently, most are males that were too small to harvest. I have been getting a few nice spears all summer…

Jade wanted outside but I was a little reluctant to just let her out of the house when I was going to be in the garden. Jade is my son’s cat and he left her behind (and his tomcat) when he and Chris moved out. Jade has no claws so she stays in the house. So, since she wanted out, I carried her all the way to the garden (second time). She had loads of fun exploring and never ventured out of the garden. She seemed to like chasing the Cabbage White Butterflies so they couldn’t land…

I have some catching up to do. I seem to take photos every day but do nothing with them. I have to post about the watermelons and how and why I prune them. Then, today, which is not today by the time I get this post published, I found the tomatoes are under attack by THREE preditors… I noticed a few plants with whiteflies a couple of days ago which need to be sprayed with the neem oil. I hadn’t noticed any hornworms or any damage from them and I check pretty much every day.  I did notice a few tomatoes with small holes but I couldn’t find the culprit. THEN, this afternoon (Tuesday) I found a worm I had not seen before. Next thing I knew, I found several. Some were quite large and they were boring holes in the tomatoes and climbing inside… GEEZ! I did have my camera so I have photos. Then, a few hours later, I went back and found a few more as well as SEVERAL hornworms. That time I didn’t have the camera… What I want to know is how can there be no hornworms then they just suddenly appear? SO, I will be posting about the tomatoes as well.

SO, until next time, be safe and well, stay positive, be thankful, and GET DIRTY!