Hello everyone! I hope this post finds you well. We had another storm on June 5, a month to the day since the last one. Like before, this one did quite a bit of damage in town with trees and limbs falling. Then another one popped in the next night. I didn’t have any major issues in the yard like last time and I didn’t go to the back of the farm to see if there was any damage this time. The grass in the hayfield is getting so tall and thick it is hard to walk through. We have more rain and thunderstorms in the forecast beginning Monday night after 10 PM. We’ll see if the forecast is right… At least 2-3 more inches coming.

I managed to get the garden tilled and pretty much weeded before the rain came because I knew it would be a few days before I could get in it again. After a couple of 90° F days the top has dried out pretty well.

Hmmm… Everything has managed to come up and do pretty well except the sweet corn. I hadn’t planted a garden since 2017, so I had forgotten the issue with planting sweet corn with the seeder. You have to angle it slightly so the seed won’t fall out of the hole. SO, I had to replant a lot of seed. The second planting didn’t do well because the moles ate a lot of that seed even though I had ut the mole repeller in the middle of the garden right from the start. SO, I planted the third time and put the mole repeller between the two sections of corn. The third time I think it all came up. I also transplanted some of the seedlings. The other reason I don’t like planting corn with the seeder is because it plants the seed, what does get planted, to close together. I could never figure out why you should plant 2-3 seeds a few inches apart and thin to one plant 10-12 inches apart. Why not just plant one seed 10-12 inches apart so you don’t have to thin? I did that in Mississippi and it worked fine. Next time I am not planting corn with the seeder unless I am fortunate enough to buy a Hoss Seeder. That would be AWESOME! 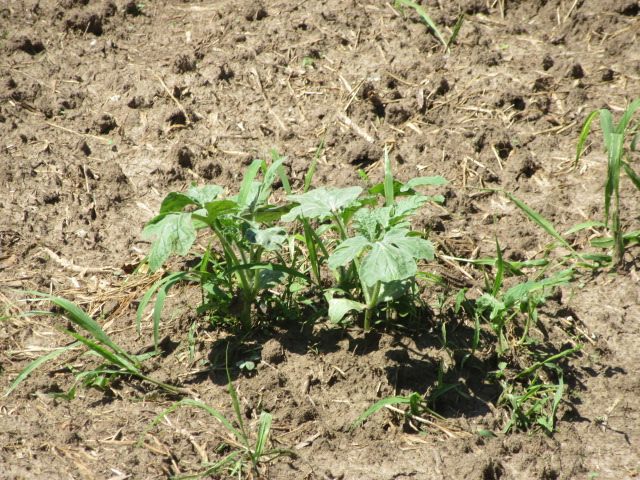 The ‘Black Diamond’ Watermelon seedlings are doing well. I can hardly wait to sink my teeth into a ripe, red, sweet, juicy watermelon!

The east side of the garden is doing good. On the right of this photo is the ‘Broad Windsor’ Fava Beans. I bought the seed in 2017 but didn’t plant it. I decided I would plant some of the seed to see if they would come up. YEP… Every seed I planted came up. I left room in that row for the Okra seed. The center row, about half, I planted kale. I bought new seed from the Green Street Market in Clinton even though I had two other varieties from before. I decided I would mix all the seeds together. It came up pretty well but we had a rain afterward and I think some of the seed got covered too deeply. The other half of the row is ‘Sugar Ann’ Snap Peas. It came up pretty well and is doing very good. Then the tomatoes… ‘Rutgers’, ‘Goliath, ‘Mortgage Lifter’, and ‘Cherokee Purple’. There is still a little short grass between the tomatoes I didn’t have time to remove yet. I did manage to get them staked. I had spent every evening in the garden until I could see. Then it rained… I plan on mulching the tomatoes with old hay. 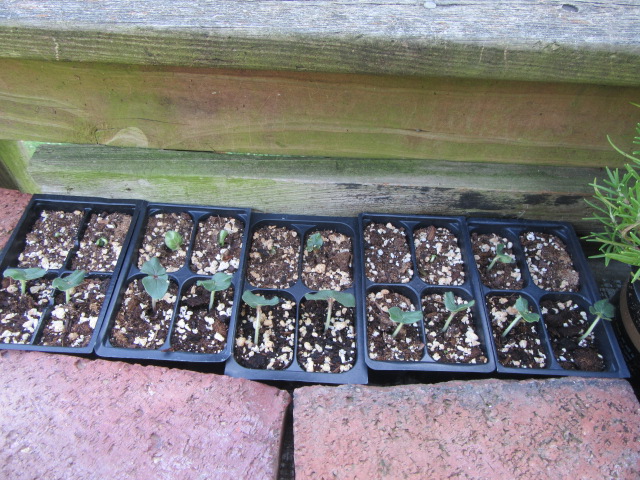 With the mole issues in the garden, I decided I would plant the okra in 4-packs. I have wanted to try ‘Jing Orange’ for several years but they was always sold out before. I found a seller on Ebay so I bought a package of 10 seeds. Hmmm… When I opened the package there were 20 seeds so, I planted all of them. All but one have come up or sprouted… You just never know…

The Deutzia scabra is flowering full swing again. I cut it way back a couple of years ago and it is almost as tall as before. It was 14′ tall… 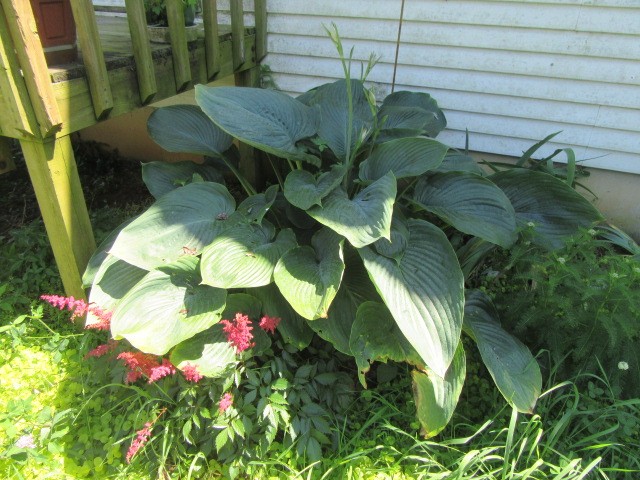 The Hosta ‘Empress Wu’ is STILL growing and now it has buds. 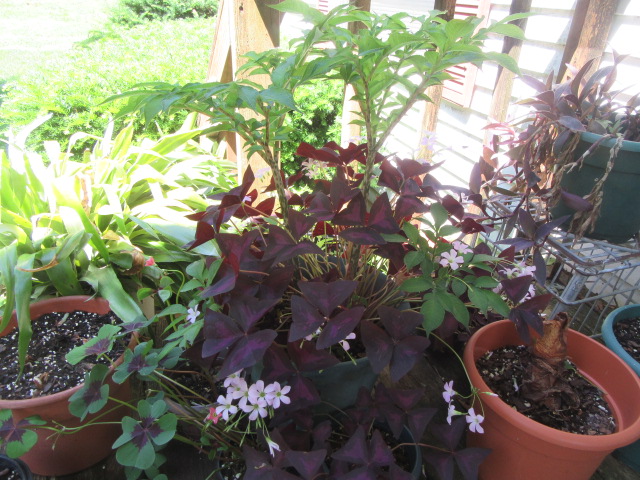 Hmmm… Last year I said I was going to remove and separate the two Amorphophallus in this pot and leave it for the Oxalis triangularis subsp. papilionaceae (False Shamrock). Well, as you can see that didn’t happen again (yet). Now there are a few Amporphallus offsets as well. A few springs ago 12 came up…

Hmmm… One of the Amorhphallus kids is going to be a joker. It said to take a photo of it with the flower to make you think it bloomed. I assured him my readers were smart enough not to fall for that… 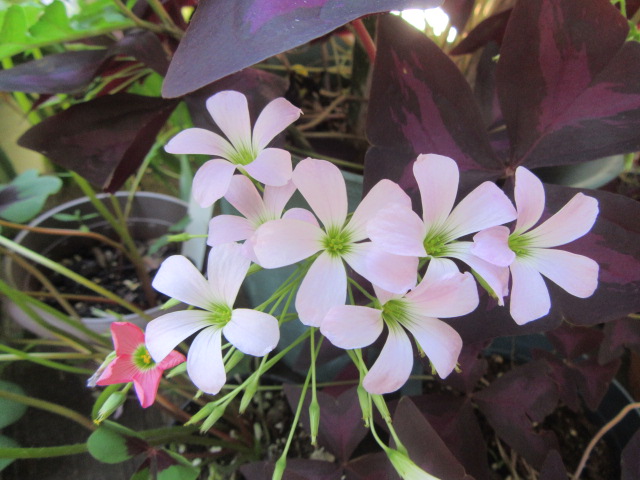 The Oxalis triangularis subsp. papilionaceae in this pot loves to bloom inside during the winter and outside in the summer. The salmon-pink flower is from the Oxalis tetraphylla. 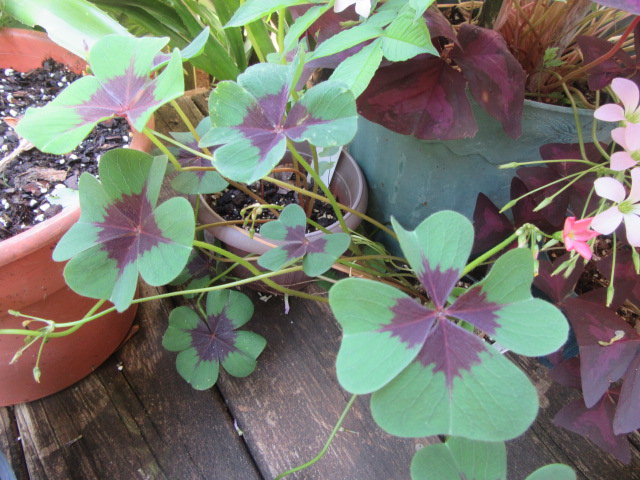 The Oxalis tetraphylla (Iron Cross) had a few flowers when I brought it home but they have just about fizzled out. It does have several new clusters, though. My other pot of Oxalis tetraphylla didn’t come up so I had to bring home another…

Well, that’s all I have to talk about for now. Until next time, have a great week. Be safe, well, stay positive, and always be thankful. Don’t forget to GET DIRTY!

9 comments on “Sunday Update-Just Checking In”