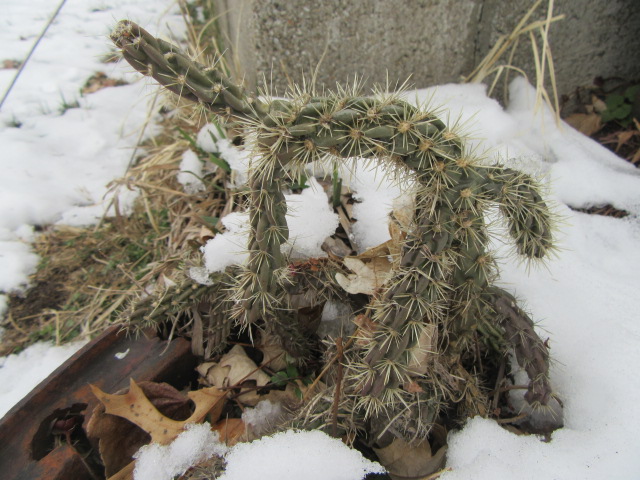 Hello everyone! I hope this Six On Saturday post finds you all well. We had another snow this week followed by VERY cold temperatures for a few days. It was 1° F when I went to bed Thursday night. Today is the beginning of a heatwave and the forecast says the high today will be 44°F (but cloudy) and 52 on Sunday and Monday. The rest of the week will be in the 30’s with a chance of rain on Monday.

#1 is a photo of the Cylindropuntia imbricata (Tree Cholla) that is patiently waiting for spring. It has been fairly mild, temperature wise, this winter so the Tree Cholla hasn’t turned a maroon color like it does when it is very cold.

I needed to go to town and I could hear geese from the park. So, I decided to head that direction.

#2. On the way to the park, I decided to take a photo f the front pasture looking toward the twin Mulberry Trees. A couple of years ago one of them started leaning… There is an old hedge post growing at the base of the tree that is leaning from an old fence. I think that is the only thing holding it up. 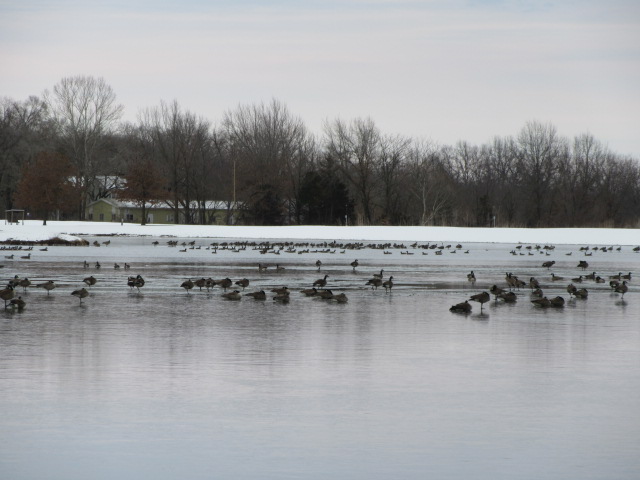 #3. There were a lot of Canadian Geese on the park lake which is still partially frozen. They were really squawking! 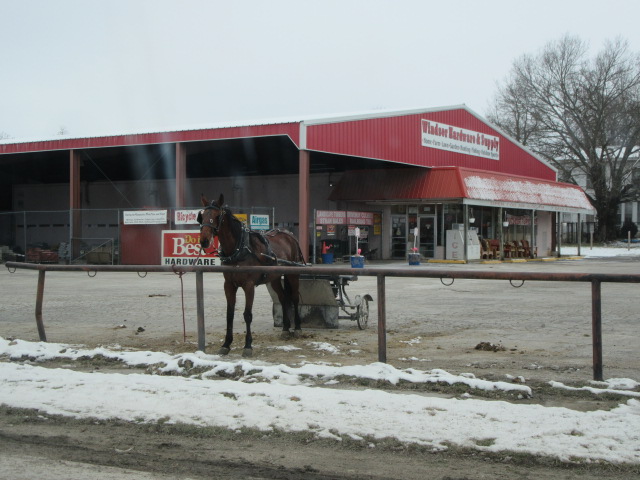 #4. As I drove by the hardware store, I saw one of the Amish horses tied up waiting for its owner. Their horses work very hard even in the coldest weather. When I was a kid, this used to be the Gerbes Grocery Store. After Gerbes closed it was Sav-More, then Wischard’s Grocery. There was a Gambles hardware store on Main Street when I was growing up but after the owner’s retired another resident bought the business and it became a True Value. Then it caught on fire… The owners bought the old grocery store and moved True Value here. When I moved back here in 2013 it was a Do It Best.

#5. The local Golden Valley Clinic, which is part of the hospital in Clinton, is building on. It is good to have a clinic for the community residents and the new addition will allow more services.

A lot of changes have taken place in this small community, not all good. Like most smaller communities struggling to survive. Industry closes up and people have to drive to work outside of town leaving businesses to also close. Many business owners were forced to retire that had stores for MANY years because they were starting to sink their hard-earned money into their business. New businesses would open only to not be able to make it. So, our once thriving Main Street is a mixture of struggling small businesses, empty buildings, and a few lots where old stores have been torn down. There are a few, however, that seems to be doing well, or at least well enough to be in business.

#6. R.I.P. Echinopsis Mirabilis (Flower of Prayer). I brought this cactus home from Lowe’s on March 29, 2019 and it rewarded me with several flowers over the summer. Information says it is a fairly short-lived species but I was hoping our companionship wouldn’t have ended so soon. Not long after I brought inside for the winter I noticed it was ailing. I had put it in a new pot which I am quite sure didn’t lead to its downward spiral. I repot a lot of cactus in the winter and have never had any problems. In fact, I have lost very few cactus. Maybe I can find another one in 2020…

BONUS! OK, I seem to always take an extra photo for Six on Saturday. This bonus is about the new plant I found at Wal-Mart on January 8. First, it took great debate about whether to buy it or not because I had very little money. If it had only been a few dollars it would have been no problem, but this plant was NOT cheap. I am not saying I haven’t paid more for a single plant, because I have when I had the funds. One time I carried around a magnificent Kalanchoe beharensis for an hour at Lowe’s when I lived in Mississippi debating whether or not I should pay the price. I had friends with me who said I deserved it, so I brought it home. Only to leave it with another friend, along with over 100 other plants, when I moved back here in 2013.

The thing with this Sanseveria that made it so irresistible was that it is so weird. It is the dwarf form of Sanseveria ehrenbergii called ‘Samurai Dwarf’. Of course, the label from Rocket Farms just says Sanseveria ‘Samurai’ which is incorrect.

While I was at Wal-Mart, I resisted other cactus that were available. One reason was because of lack of funds and the other were the labels… The labels just said “cactus” and they weren’t from Altman Plants. They were from some other grower that didn’t even remotely bother to have any kind of tag with a proper name, even if it was incorrect. I am not venting at all, in fact I am laughing as I write this. I am thankful the plants weren’t labeled correctly so I didn’t bring any home and decided to bring home the Sanseveria instead. 🙂

I did renew my domain name and my premium WordPress account will be renewed in March. I have to keep premium because I amusing to much “space” for a free blog. It would be interesting if I could figure out how to make some income through my blog but I don’t want a bunch of annoying ads, though. I go to a lot of sites I am trying to read and the page bounces around while the ads load…

If you wish to participate in Six on Saturday posts, be sure to read the Six On Saturday-a participants guide from The Propagator.

Well, that’s about all I have to say for now. I could keep rambling but I think I have said enough. All is well here and I hope you stay safe, remain positive, and be thankful. I know there is some bad weather where some of you live and some of you aren’t 100% well. I keep you in my prayers and hope I am in yours as well.