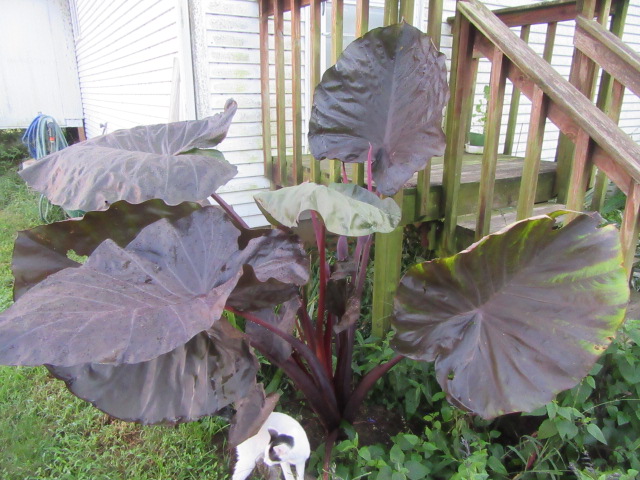 Hello everyone! I trust this post finds you all well as summer starts to wind down (here anyway). We have had much cooler temps the past few days but it is supposed to be 90° F on Tuesday.

I wanted to share a few photos of the Colocasia and Leucocasia gigantea ‘Thailand Giant’. They seemed to be growing slow then they went bizurk! The Colocasia ‘Distant Memory’ in the above photo is NOW 64″ tall.

The cat in the photo isn’t my cat… Well, I am not so sure about that now because she has made herself at home. Nathan brought her home one night from a convenience store parking lot. She didn’t look like she was a stray to me and had a flea collar on. I told him he should take her back then he told me “after a week” that she had been in the parking lot for several days. GEEZ! When I came here in 2013, mom and dad had 20 cats. I got all the females and males spayed and neutered and after six years there were only five left. Nathan came and brought two more. Then Kevin gave me the little black kitten (GEEZ!) and now there is this one. Yes, it is a female and Nathan’s male cat Simba has taken a liking to her… I went behind the chicken house this morning to have a look at the Dayflowers and “you know who” followed me… 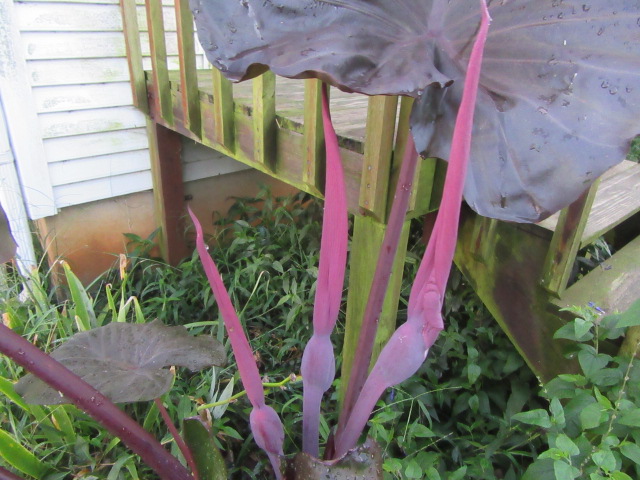 As I mentioned before, Colocasia ‘Distant Memory’ is the first black-leaved Colocasia I have grown since 2013. I was thinking about a ‘Black Magic’ but found this one at a local greenhouse. It is a Walters Gardens introduction.

It had been raining before (and after) I took these photos so all the leaves are wet.

The leaves are pretty neat for sure but not as “puckered” as advertised. I am not complaining at all because this is a nice plant.

The undersides of “Elephant Ear’ leaves are pretty neat and this one is really NEAT!

I must say the Colocasia ‘Coffee Cups’ has done very well over the past month and is now 39″ tall. 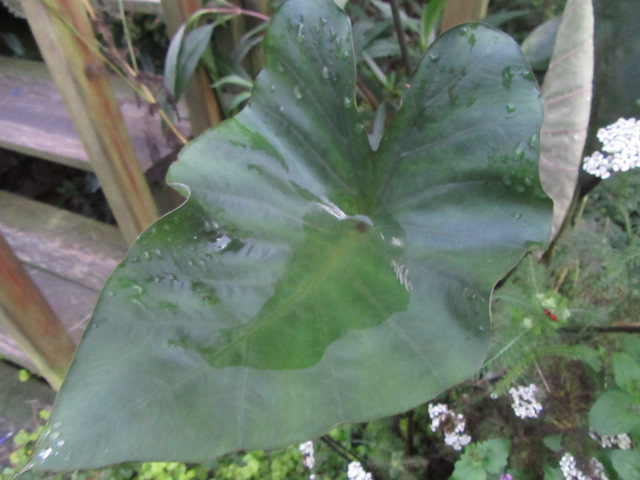 It’s always neat how the leaves hold water then dump it out once it gets heavy enough. It would make a nice little video.

Colocasia esculenta on the north side of the house on 8-30-19.

The Colocasia esculenta on the north side of the house and doing really well despite the apex of the rhizomes rotted before I set them out. The tallest plant is 65″ tall…

Cannas and Colocasia esculenta along the garage on 8-30-19.

Hmmm… Ignore the grass and weeds. It was a surprise when the Colocasia came up in the Canna bed this spring and more surprising how well they have done this summer. Well, most of them. The big one in the middle of the photo is 60″ tall. I planted them along the Cannas last spring because I had plenty extra. Instead of digging their rhizomes for the winter, I mulched them along with the Cannas and they all came back up this spring. Well, Cannas aren’t supposed to overwinter in the ground here either…

The Leucocasia gigantea ‘Thailand Giant’ finally got with the program and is now 55 1/2″ tall. Hopefully, it will flower like the one did in 2017.

Leucocasia gigantea ‘Thailand Giant’ grow MUCH bigger in the south and in tropical climates than here but I am very pleased. We still have until sometime in October for it to grow bigger.

I have still been taking wildflower photos and even found a few new ones this past week. It is weird how I am still finding new plants after I have been here since 2013. I found a nice small white flower a couple of days ago I couldn’t ID then found out they are normally blue. So, let me see… How many wildflowers have I found this year whose flowers have been an unusual color? I think three or four. Then, the weird Dayflowers that have all the features of a particular species except one… That will be the next post. 🙂 Why don’t they have reddish-brown spots like they are supposed to have? OH, and in 2017, the Dayflower photos I took all have three blue petals. Now, where are they? Then there is a colony in the back of the farm near the swamp that is totally different that has not started flowering yet. Need flowers for a positive ID. I am 99% sure they are a species of Commelina (Dayflower) because of the veins on the leaves. Hmmm… Maybe they will have three blue petals. 🙂 Then I can say, “Ahhhh! There you are!”

Probably the hardest wildflowers (weeds) to make a positive ID here are the Persicaria (Smartweed) species… There are at least four species here that only one thing distinguishes them from similar species. I have been using the magnifying glass to try and figure them out. It seems I am looking for the “thing” that is missing to prove they “are or aren’t” particular species. Then this afternoon, I found the missing “thing” on two colonies growing separate from the other three species (or four)… There could also be another species around the back pond. I saw before… Any way, I have been working on their ID for a couple of years. OH, then there are the three colonies, in another location, that are the same species with different color stems. One has red stems, one has green stems with red nodes, and the other is in-between. Not only in color but location. They are all only a few feet from each other. I will be posting about them once I get them figured out, or at least when I convince myself I have made positive ID’s. Hopefully within a few days. (Scratching my head).

OK, I will close for now…

Until next time, be safe, stay positive and be thankful! Get dirty if you can because a little dirt is good for you.