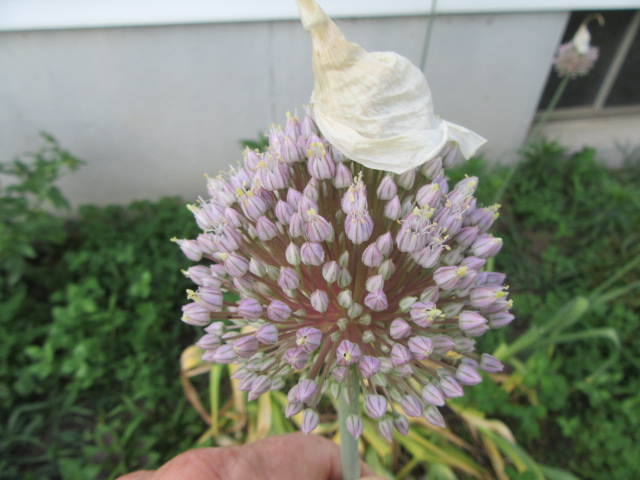 Hello, everyone! I hope this post finds you well. It happens every year… Some perennials come up earlier than others and some you have to wonder about. Then there are the re-seeders you have to wait on to see if they are going to come up at all. You are ready to get the beds tidied up and make decisions about what you are going to do with the beds. You go plant shopping to see what is available and bring home new plants. Some plants you liked the year before aren’t available so you get to try new cultivars and new plants.

The Elephant Garlic (Allium ampeloprasum var. ampeloprasum) in the above photo is now flowering in the south bed. A great example of having your cake and eating it, too. 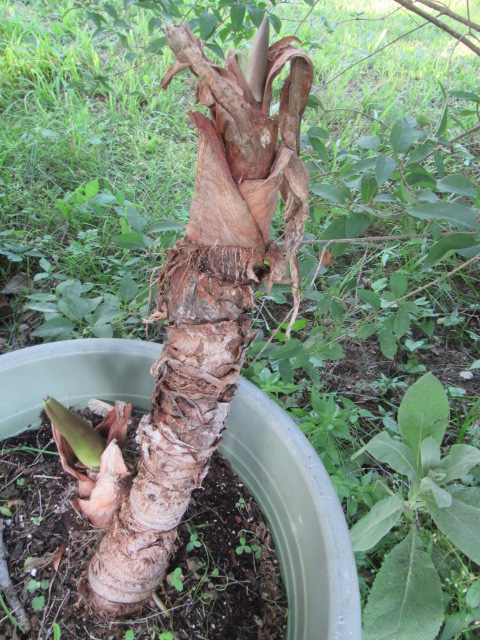 A few of the older Alocasia went dormant and this Alocasia ‘Mayan Mask’ is FINALLY waking up. Two others are still thinking about it.

Hmmm… Last spring I bought a Siberian Bugloss, Brunnera macrophylla ‘Jack Frost’. It did very well and was a beautiful plant. Once the Japanese Beetles really set in on the Chinese Elm tree and changed its environment, it started ailing. By the end of July, it was completely dead. I didn’t see anything online about this species going dormant so early, so I just contributed its demise was because of the heat and increased light. I left the label in place just in case it returned in the spring because you never know. I always say, “Just because it is dead doesn’t mean it is dead.” I have been surprised many times. Well, there is a plant coming up beside the label but there is a weed with similar leaves, which I haven’t bothered to ID. So, this is either the Bugloss returning or a weed trying to fool me… Most likely, the latter is the case. But, I am keeping an eye on it. 🙂

By the time I am finished with this post, which is likely to take several days, maybe we can tell what is really going on here. 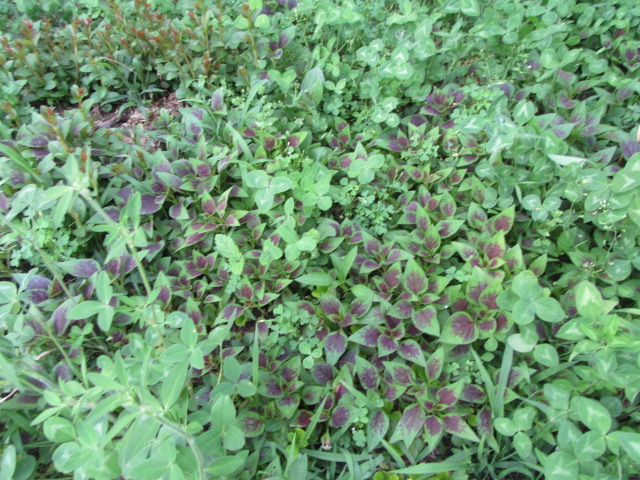 Waiting and waiting… Then all the sudden, “OH, CRAP!” Almost time to transplant the Celosia argentea var. spicata ‘Cramer’s Amazon’ and Talinum paniculatum (Jewels of Opar).

It happens every spring… It seems I need to work on the south bed but I always think I have to wait for the Celosia and Jewels of Opar to come up. Last spring the Rudbeckia hirta ‘Denver Daisy’ came up in abundance from self-sown seed but barely any came up this spring. In fact, I am not so sure any did and I was beginning to wonder about the Celosia. But when they did come up, they really came up! I think I am pretty safe if I don’t even worry if they will come up and just go ahead and do whatever I want with the south bed when I am in the mood. The Celosia and Jewels of Opar will come up when they are ready and it doesn’t matter where I dig. I will still have more than enough.

The Colocasia esculenta are finally coming up in the north bed. I didn’t post photos, but something terrible happened with the BIG rhizomes… The biggest ones had crown rot but the majority of the rhizome was OK. It just made the smaller eyes come up around the rhizomes instead of the main one from the center. Hard to explain but maybe you get the picture… It was unusual, but the small Colocasia esculenta I planted in the front of the Canna bed overwintered with leaf mulch and came up long before the rhizomes I planted… I don’t know what the Xanthosoma robustum is going to do because it sort of had the same problem only in a different way. It rotted from the bottom instead of the top. Last time I checked, the top sprout had broken off but there is some kind of activity on the remainder of the rhizome… Time will tell. The temps have been weird and the soil has remained cool and damp which they don’t like…

TRIPLE GEEZ! The Conoclinum coelestinum (Blue Mist Flower) I call ‘Aunt Inez’ always comes up so late. It is a perennial or sorts but these always come up from seed. Supposedly, they are an herbaceous perennial that “spreads aggressively” by rhizomes and self-seeding. Dad got his start from Aunt Inez (his mother’s sister) many years ago. They were in a good-sized group on both sides of the steps but they have declined, which may be partly my fault. I have been panting other plants where they grow which had led to their seeds being lost or not being able to come up. It was kind of tiresome waiting for them to come up then having to move them around a bit. (GEEZ! That is like in the south bed!). Then after I get the beds planted, a few come up… I am not complaining at all, and I am thankful that at least a few have made an appearance. I have tried to relocate a few in the past, but they never return the next spring. As far as them spreading “aggressively” by rhizome, I have never had that happen and it would be a good thing if they even tried. They are a nice plant with neat flowers. The worse thing about their seedlings is that one might think they are a weed and pull them up by accident. My dad used to keep an eye on me and was quick to point them out. He would say, “that’s one of those flowers. You have to be careful not to pull them up.” 🙂 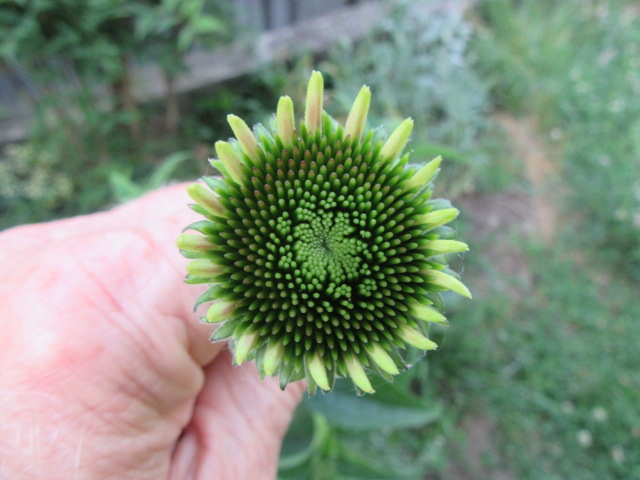 The Echinacea purpurea (Purple Coneflower) “are” now budding. They have done very well and are getting very tall. I am so thankful I have these now! I failed to dig up a few of the Echinacea paradoxa (Yellow Coneflower) along a back road which I wanted to plant somewhere on the farm.

Grammarly thinks “are” should be “is”. I had to remind it “are” is a present and plural form of “be” and “is” the singular present form. 🙂 We are at a stalemate and it is thinking about it.

The Heuchera ‘Obsidian’ is looking MUCH better now. I was beginning to wonder for a while if it would make it.

The very nice Hosta ‘Abiqua Drinking Gourd’ is going to bless us with its first flowers this year. It’s first! 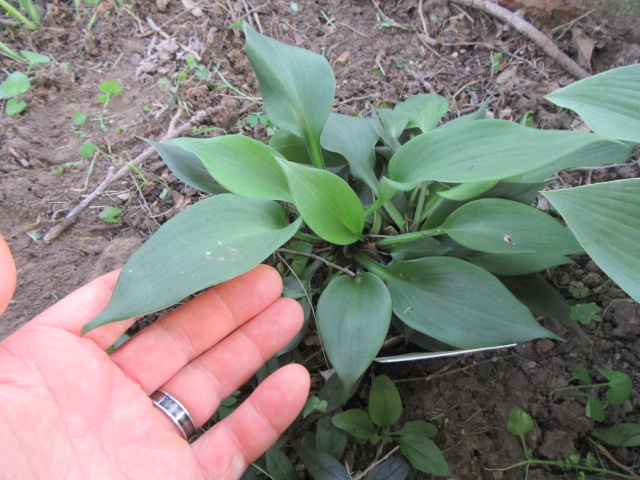 The Hosta ‘Blue Mouse Ears’ definitely has no identity crisis. Its flowers are just as compact, neat and tidy as the whole clump. 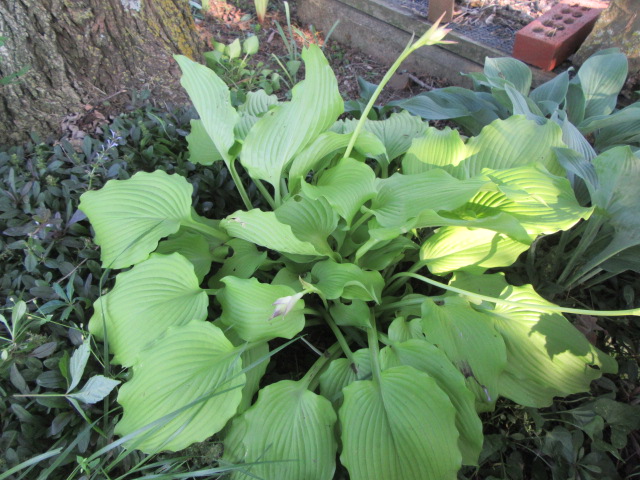 The always glowing Hosta ‘Dancing Queen’ is further dazzling us with buds.

Hosta ‘Forbidden Fruit’ is looking especially AWESOME this year and flowering right on schedule. I took photos of the Hosta on 6-9-2018 and it didn’t have buds, but it did on the 14th. So, we are pretty much right on schedule.

SURPRISE, SURPRISE! I had almost forgotten about the Monarda didyma ‘Cherry Pops’ (Bee Balm)! I saw it had sprouted a while back, but the Creeping Jenny had completely covered it it. When I was taking photos on Sunday, it said “HERE I AM! DON’T FORGET ABOUT ME!” I smelled its leaves to make sure it was really it. 🙂 I am very thankful it came up. Now, we’ll see if it flowers.

The Virginia Creeper (Parthenocissus quinquefolia) is one of those “I fooled you” plants when they are very young. You can easily mistake it for a Viola and not pull it up. Sometimes their second set of leaves may even resemble Poison Ivy (Toxicodendron radicans), which fooled me for several years at this stage. I had plenty of both in Mississippi and was always getting a little rash after pulling weeds in the back yard even though I didn’t see any poison ivy where I was working. Then one day I noticed the Violets I didn’t pull had three leaves so I thought Poison Ivy started out looking like Violets. Well, that is not the case. Small Poison Ivy starts out with leaves of three while the Virginia Creeper starts out looking like Viola species. By the second or third set of leaves, you can clearly see the five-leaved Virginia Creeper.  Some people break out in a rash similar to Poison Ivy from the sap of the Virginia Creeper as well.

One interesting thing about Poison Ivy is that it is not an Ivy at all. Believe it or not, it is in the family Anacardiaceae with Cashews, Mangos, Pistachios, and many other ornamental trees that produce “fruit” that are drupes. Many of the plants in this family produce sap with urushiol which is what causes the rash. Virginia Creeper (or Woodbine) is in the family Vitaceae along with grapes. These plants produce raphides (crystals of calcium oxalate) which can also cause irritation by puncturing the skin of sensitive people. Umm… I mean people with sensitive skin. 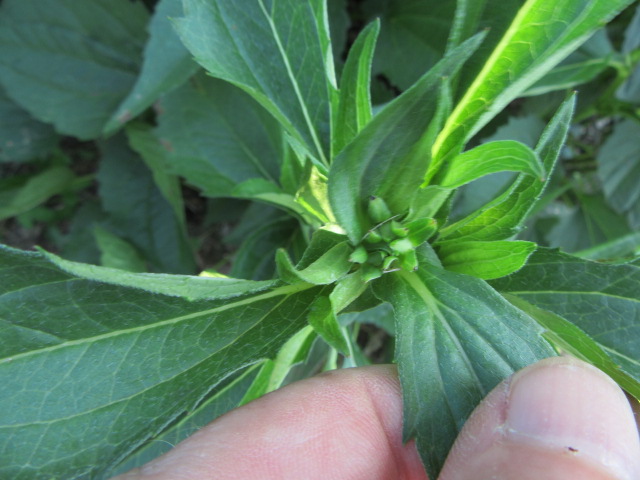 The Rudbeckia fulgida var. sullivantii ‘Goldsturm’ is starting to bud now. There will be A LOT of flowers because they really like it where the biggest patch is now. 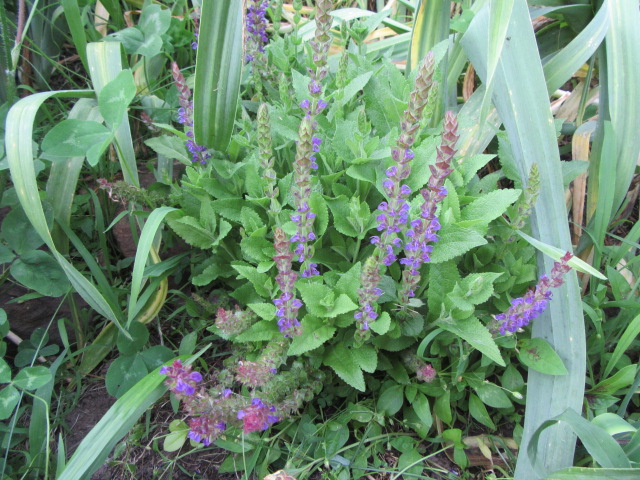 The Salvia nemorosa ‘New Dimensions Blue’ seems to be having some difficulty expressing itself this spring. It was like it couldn’t speak for a while and was always looking over its shoulder. Then I realized maybe it is the Elephant Garlic… The Salvia x sylvestris ‘Mainacht’ in the other end of the bed had the same difficulty until I removed the garlic next to it. This year it has gone bananananas! Maybe the smell of the garlic and the scent of the Salvia don’t mix well. Chemical reaction. LOL!

The Lamb’s Ears (Stachys byzantina) are blooming once again. They seem to like this spot and I am going to attempt something… I have a plan… Top secret. 🙂 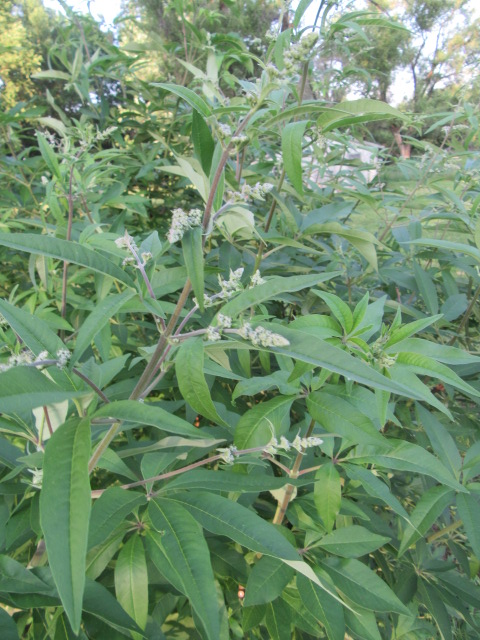 The beautiful Chaste Tree, Vitex agnus-castus ‘Shoal Creek’, is looking great and starting to flower. I really like this shrub but it can be weird sometimes. It made it through the winter like a deciduous shrub instead of having to come up from the bottom like a perennial. It has been a few years since it did that. There are a few advantages to that including their stems are much stronger. Last spring it came up from the ground and next thing you know all the stems were flat as a pancake and growing horizontally because the stems were weak. I have photos to prove it. 🙂 So, I am very thankful it growing normal this year.

That’s all for this post. Until next time, be safe, stay positive, be thankful and you know the rest.