Hello everyone! I hope this post finds you all doing very well. I used to follow a few cooking blogs that were very good, but recently I started following In Diane’s Kitchen. She has MANY very interesting moth watering recipes she shares on her blog. Her post from December 12, 2017, was about her Pizza Stuffed Meatloaf. I left a comment telling her I had a stuffed meatloaf recipe that was delicious. She asked what I stuffed it with so I emailed her the recipe. Unfortunately, she is having difficulty with her email. I had hoped she would have received it so she would cook it and put the recipe on her blog. BUT, since that didn’t work out, I decided I would do it myself. So, I cooked it for dinner tonight. Well, Sunday evening, depending on when you read this.

I enjoy cooking because I enjoy eating. Of all the recipes I have tried, this one is my favorite to eat. It first started out when I was in Mississippi. Suzanne (Dr. Skinner) found out I liked to cook, so before I even arrived in California, she had started buying cookbooks. When I was packing the last of her truckloads to move to Mississippi I found box after box of cookbooks she had bought for me. I never counted how many, but just guessing, I would have to say over 300… She started buying them on Ebay where she could by A LOT at a time so I had many of the same cookbooks and a lot I wasn’t interested in. After she passed, I chose the ones I wanted and let the rest be auctioned off. Of course, mom and grandma had several cookbooks, which are in the bookcase in the dining room.

I cooked several recipes while she was still alive, including the Savory Stuffed Meatloaf I found in a Betty Crocker Hamburger Cookbook on page 33. I can’t find the cookbook right now, so it is a good thing I put the recipe in the computer. I will look more later and add the photo if I find it. Suzanne said the recipe was fit for a king. She said when we invite people for dinner, you can cook anything you want except for this recipe. I guess she wanted it for herself… 🙂

You will find other versions of Savory Stuffed Meatloaf online and this recipe is also on a few other websites.

I have cooked this recipe several times and have tweaked it somewhat. I will put the list of ingredients as is in the cookbook but I will tell you where I changed or omitted some of the ingredients. There are three parts, the meatloaf, the stuffing, and the topping.

I had to get up early this morning and was pretty tired in the afternoon. I tried to take a nap but couldn’t sleep. I had making this post on my mind so I got up and went to the grocery store. When I arrived back home, I began…

First, we will need to preheat the oven at 350° F and make sure the rack is in the center.

The recipe calls for:

I modified this recipe a little and didn’t add the dry mustard. I also usually substitute minced garlic in place of the garlic powder, more than 1/8 teaspoon of course. The bacon, which is optional, adds a little interest to the first bite. I had normally cooked this recipe without the bacon until the last time. It was very noticeable with the first bite, but after that not so much. Kind of wakes up your taste buds for sure, so I cooked it with the bacon again this time.

I usually buy ground beef that is 90% lean but they didn’t have any at the store today. So, I bought ground chuck which was 80% lean. That means this meatloaf may shrink a little more than usual.

Put all the ingredients in a bowl and mix well…

Dad always said when you make a meatloaf you have to mix it with your hands and squeeze everything together. So, that is always what I have done when I make meatloaf.  One more thing I need to add to the list… Paper towels so you can wipe your hands off before washing them. You wouldn’t want to get the camera all goopy, would you?

This recipe wouldn’t be the same without the stuffing. Besides it being mandatory if you are going to call it a stuffed meatloaf, it is AWESOME!!! I always use butter in my food instead of margarine. There are some spices in the cabinet that are very old, including the Sage.

You can add the other ingredients anytime you want, but I usually do it after the celery and onions are somewhat tender. 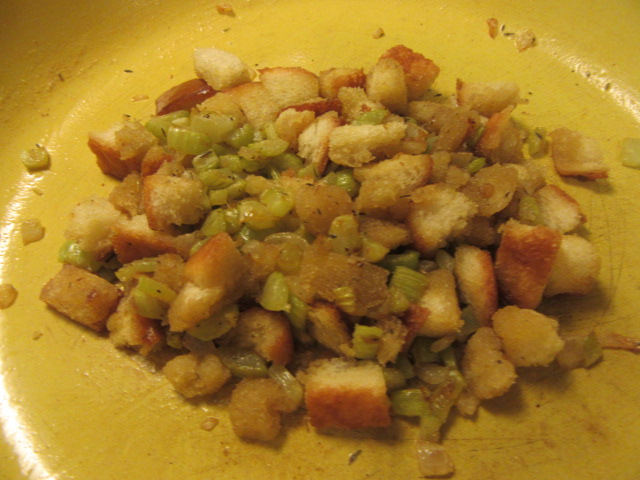 Once the mixture in the skillet is ready, add the bread crumbs and stir until the butter mostly coats the bread.

Preparing The Pan For The Meatloaf… 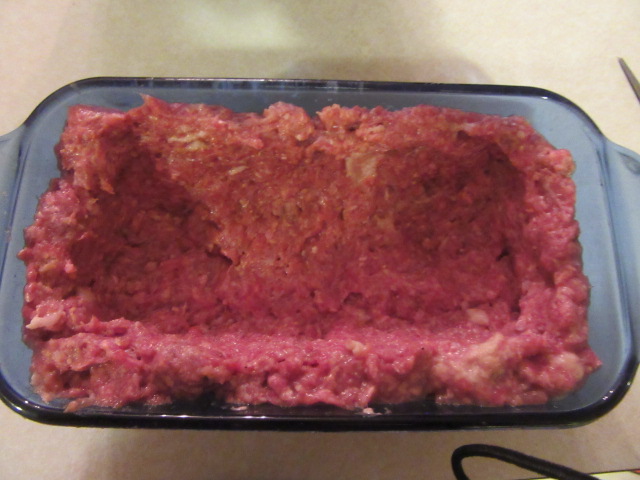 Not all meatloaf pans are created equal. You will need a 9″ x 5″ x 3″ pan and I prefer glass for some reason. You will need to use approximately 2/3 of the meatloaf mixture to kind of make a boat, going up the sides of the pan to about 1/4″ from the top. It is best to do this right before you add the stuffing or it will sag. It is kind of hard to get this evenly but that’s OK. Practice makes perfect. 🙂 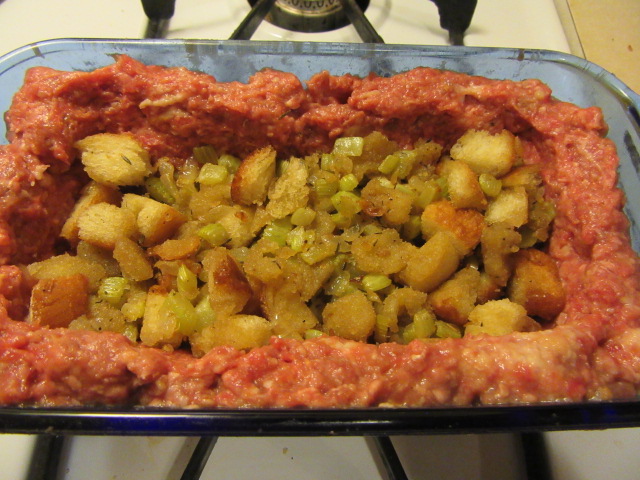 Then, fill the inside with the stuffing mixture. 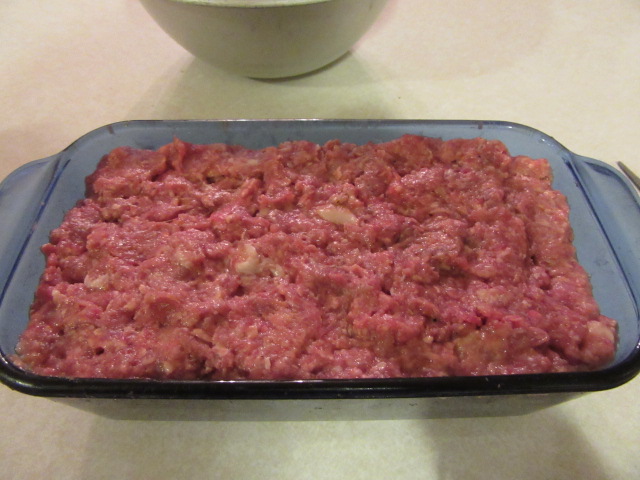 Then, add the remaining meatloaf mixture to the top of the stuffing. You will need to squeeze the edges to the top part or it will separate somewhat during cooking. Kind of like pinching the bottom and top crust together when you bake a pie.

I usually cover the pan with aluminum foil and put it in the oven while I am making the topping. Don’t ask me why because I have no clue…

Many people make meatloaf without a topping, but to me, that is like making a cake without icing. I always substitute minced garlic in place of the onions. I remember once I put way too much garlic in and realized later that wasn’t a good idea. I thought I could never have too much garlic but I soon found out there is sometimes a limit.

Mix all the ingredients together then…

Take the meatloaf out of the oven… That is if you put it in the oven already in the first place. Spread enough of the topping to evenly cover the top of the meatloaf and then but it (back) in the oven. I usually put the foil back on for a while in case it splatters, not that it will that much. I just don’t like cleaning ovens. Problem is, while the pan is full the topping will stick to the foil a little. As the meatloaf shrinks this won’t be a problem.

Every so often, maybe every 20-30 minutes or so, take the meatloaf out of the oven and put more topping on it. I kind of made that part up, too. You can, of course, put all the topping on at once, but experience has taught me to add a final coating when the meatloaf is almost finished. Sometimes, but not always, the meatloaf will split in the middle leaving a small gap with no topping. We can’t have that. 🙂

Oh yeah, I almost forgot. I dump out some of the oil after an hour or so and again when I add the remainder of the topping. Just go slow and be careful or the meatloaf will try to jump out of the pan.

After an hour and 30 minutes, the meatloaf will be done. The coating was nice and glossy but there was a small crack in the middle. I put on a little more remaining topping, drained the oil out of the pan, then stuck it back in the oven while I took up the rest of the meal. Only 5-10 minutes.

The recipe says to take it out of the oven and let it stand for 5 minutes before cutting. I can never wait that long… 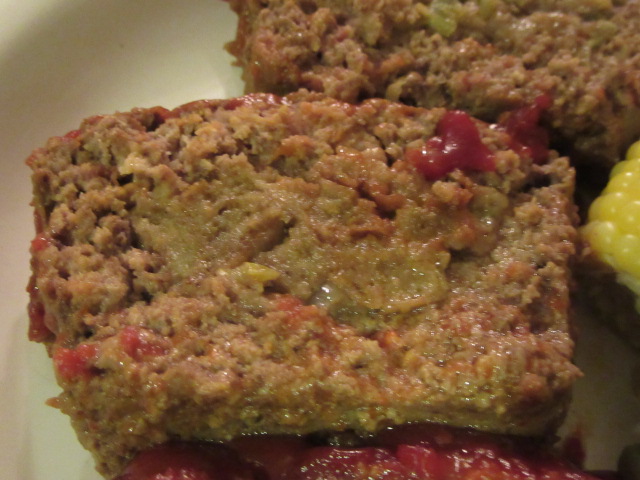 The photo looks like it still isn’t quite done, but it seemed to be. I have taken it out before and had to put it back in again. I hour and 30 minutes may work, and actually, I did put it back in for another 5-10 minutes. You could probably easily cook it for 1 hour and 40 minutes. Normally, you can take a toothpick and check like you would a cake but that is a little difficult with the topping. Once the meatloaf shrinks, you may be able to stick the toothpick in from the side. Which is what I did this time because this one shrunk A LOT!

Come to think of it, some of the pink color could be the bacon…

The first bite left me speechless. I closed my eyes and savored the moment… Amazing! Makes me so thankful to have tastebuds! I always put three good sized slices on my plate, but sometimes I have to put one back. That is like half of the meatloaf!

If you have the opportunity to prepare this meatloaf, let me know how it turned out and if you have any suggestions.

That’s all I have to say right now. Until next time, be safe and stay positive. Stay warm or cool wherever you may be. As always, GET DIRTY if you get a chance.