Amaranthus caudatus L. is the correct and accepted name for this species of Amaranthus. The genus and species were first named and described as such by Carl von Linnaeus in the second volume of the first edition of Species Plantarum in 1753.

Plants of the World Online lists 95 species in the Amaranthus genus (as of 1-6-21 when I am updating this page). It is a member of the plant family Amaranthaceae with 186 genera. Those numbers could change as updates are made. 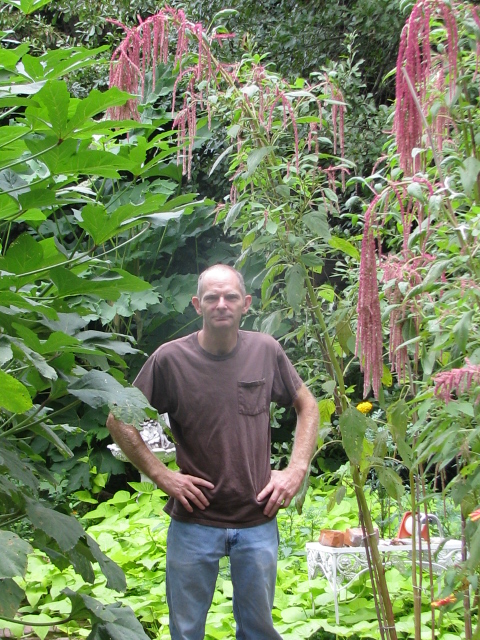 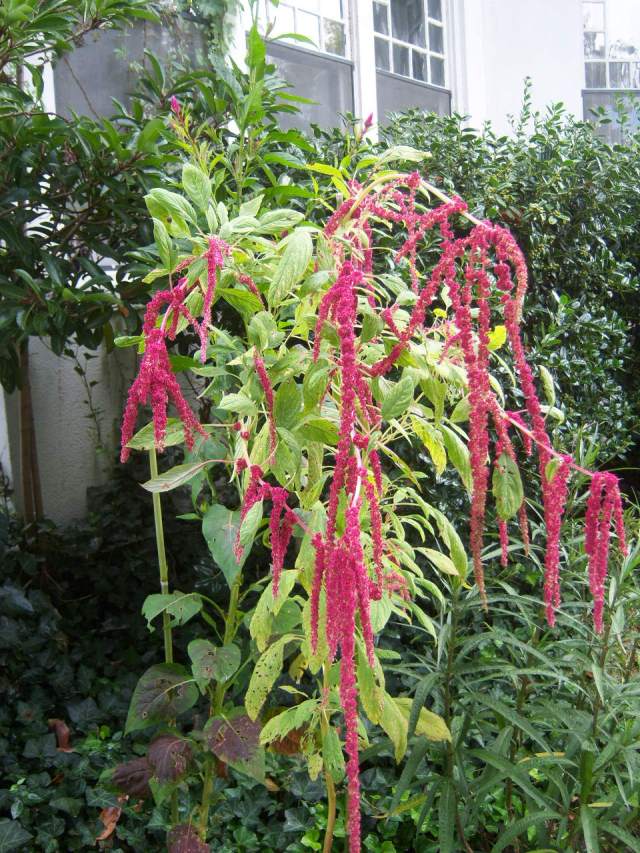 Amaranthus caudatus ‘Love Lies Bleeding’ in the front yard of the mansion in Mississippi. This one did not get as tall. This photo was taken on 10-8-12 (#120-2).

But, they again grew to almost 12 feet tall! The one I planted next to the west sunroom in the front yard didn’t grow as tall because it was transplanted late and it had more shade.

As you can see in the above photo, the bugs, particularly Japanese Bean Beetles, love the leaves. That was OK because it kept the bugs away from the other plants

Amaranthus are an awesome plant to grow and the leaves and seeds are edible. The leaves are used as a spinach substitute and are very nutritious although I never ate any. The exact origin is unknown and Amaranthus species have been used as a food source in many parts of the world, especially in South America. It is believed that Amaranthus caudatus may be a wild Amaranthus hybridus aggregate.

The red color of the flowers is due to its high content of betacyannis as in the species known as “Hopi Red Dye” Amaranth. Some of my plants had pink flowers instead of red.

Plants are easy to grow from seed but need to have plenty of light so they won’t come leggy.

Someday I will try these here in mid-Missouri. I hope you enjoyed this page and maybe found it useful. If you have any comments, questions or suggestions, I would like to hear from you. Please click on “like” if you visited this page. It helps us bloggers stay motivated. 🙂 You can check out the links below for further reading. The links take you directly to the genus and species of this plant.