Hello everyone! I hope this post finds you all well and virus free. As I mentioned in the last Six On Saturday post, I went on a walk in the late afternoon and took another 138 photos. I always take multiple photos and it was windy so a lot of photos were kind of blurry. Plus, some of the flowers, as usual, were very tiny and didn’t cooperate well.

To date, I have identified 197 species of wildflowers mainly on this 38 acres. 🙂 T thought there were only around 130 but iNaturalist says I have listed 197 different species. I think I have Identified 10 or so already this spring but I am waiting for a few to flower before they count.

First off is Chaerophyllum procumbens (L.) Crantz (kee-roh-FIL-um pro-KUM-benz) commonly known as Spreading Chervil or Wild Chervil. It shares the latter name with Chaerophyllum tainturieri which is its twin. One of the only ways to tell the difference is by their seeds. Hmmm… Both species are Missouri natives are only found in North America. Plants of the World Online lists 70 species in the genus which are spread throughout much of the world. The species was named by Heinrich Johann Nepomuk von Crantz in 1767.

No doubt, most of you have encountered this Chervil in your yard, gardens, flower beds, on walks in the woods, or somewhere. Of course, it has been here for YEARS but I just now properly identified it… 🙂 Some species are edible and even used as a root crop. Chervil rings a bell for some reason. Oh yeah. CHERVIL! It is not the same plant you use in recipes. That is apparently Anthriscus cerefolium commonly known as Garden Chervil or French Parsley. They look very similar but are not native to the U.S. and not found in Missouri in the wild. Both are members of the Apiaceae Family with a total of 444 genera… Just in case you were wondering. I feel like a plant nerd. 🙂

I found this cutie close to the fence near the swampy area in the back southeast section of the farm. It was a single solitary plant and the flower wasn’t open. I took several photos of it then walked about 12 feet away and found A LOT more… With open flowers. 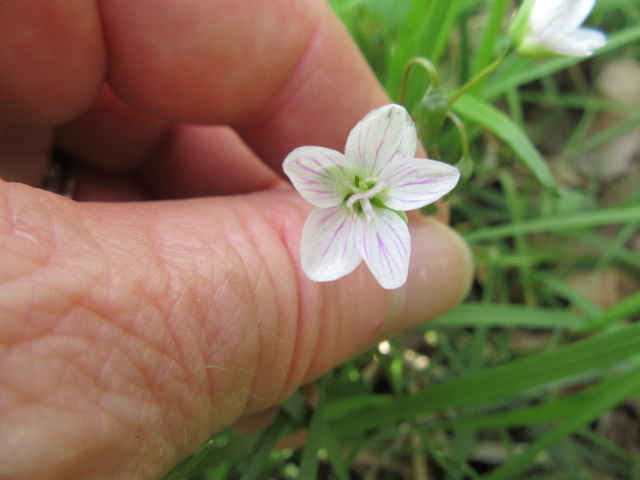 I identified this species as Claytonia virginica L. (klay-TOH-nee-uh vir-JIN-ih-kuh) also known as Virginia Spring Beauty. Both the genus and species were named by Carl von Linnaeus in 1753. This is the only plant I have identified in the Montiaceae Family which is known as the Miner’s Lettuce Family.

According to Wikipedia, the Iroquois used Claytonia virginica as a cold infusion or a decoction made of the powdered roots for children to treat convulsions. They also ate the roots because they believed they permanently prevented conception. The Iroquois and Algonquin people cooked their roots like potatoes. The leaves and stem are also edible…

Even though the leaves are edible you would starve because there are very few leaves, usually only one pair about halfway up the stem. Some stems didn’t even have basal leaves.

There are a lot of Viola sororia (Common Blue Violet) here and there on the farm but this IS NOT that plant. I found THIS PLANT close to where I previously stored hay at the edge of some trees close to the ditch that drains into the pond. GEEZ! I feel like I need to draw a good map and letter the locations. This Viola bicolor, and a few others, was happy swaying in the wind making it somewhat difficult to get a good shot. Its common name is American Field Pansy or Johnny Jump-Up. It doesn’t look like the Johnny Jump-Ups I have seen before. Hmmm… That would be Viola tricolor. Anyway, the species was named by Frederick Traugott Pursh in Flora Americae Septentrionalis in 1813. Strangely, Plants of the World Online doesn’t list this species as accepted or even as a synonym of another species. Maybe another email to Raphael Goverts is in order. POWO lists 620 species of Viola and are found nearly worldwide. Strange they would miss this one…

Their leaves are a lot different but while looking at the Missouri Plants website there are several different species of Viola found in Missouri with many different leaf types.

Then, after I found the highlight of this post, I found a clump of another species of Viola in an area behind the chicken house. This is Viola missouriensis, commonly known as the Missouri Violet. You may also notice the date is different because I had re-take photos of this clump. The 11th was kind of windy and its photos didn’t come out the very best. Even so, it was still first identified on the 11th.

This species was named and described by Edward Lee Green in 1900. While various species of Viola can come in multiple shades of blues and violets, this one was different because…

It has longer leaves. The normal violets around here have leaves that are approximately 3″ wide x 3″ long. The Viola missouriensis has leaves that are longer than they are wide otherwise it would be a different shade of Viola sororia. Several species are very similar, and like I said, all of them can have various shades of flowers. It is a breakthrough when you do find one that has something to distinguish them from the others besides the flowers.

Tony, I realize you are excited about the Mulberry cuttings but in my neck of the woods finding a white Lamium purpureum tops Mulberrys any day. 🙂 Seeing the first one stopped me dead in my tracks!

There are THOUSANDS of Lamium purpureum here and countless hundreds of millions throughout the countryside. It was quite a moment finding several clumps with white flowers in this one area. 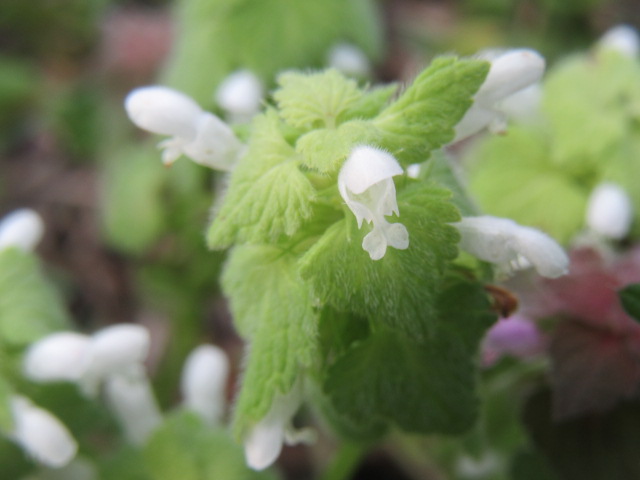 Even the leaves are a paler shade of green.

Observing and identifying new wildflower species has been very enjoyable. When I say “new”, they aren’t “NEW”, just new to me. They have been here all along I am just now noticing them. Without cows grazing in the pastures, there is no telling how many I will find. Finding plants that have weird flowers is also exciting, like the pink Achillea millefolium (Common Yarrow) and Daucus carota (Queen Anne’s Lace) last year on Kevin’s farm.

I think that is all for now. Until next time, be safe, stay positive, and always be thankful.