Hello everyone! I hope this post finds you well. The strange fall, or autumn, weather continues. I’m not complaining because it is pleasant and the potted plants are still on the porches. The low Monday evening is supposed to be 39° (likely around 6 AM Tuesday morning) but then back up again.

This post is about my continuing dilemma with the Ladies Tresses on my farm. You can basically take a 25′ swath and go across the farm and find a few scattered here and there and nowhere else. It’s weird.

So, it all began on October 3 in 2018 when I found my first Ladies Tresses. I joined iNaturlist in March 2018 but I didn’t start using it to identify plants or upload observations until 2019. Basically, I was doing my initial searches looking at photos on Missouri Plants and Wildflower Search to figure out what species I found. Missouri Plants lists six species in Missouri and there are 19 on Wildflower Search. As of 10-25-21 when I wrote this post, Plants of the World Online by Kew lists 39 accepted species worldwide. The genus is a member of the plant family Orchidaceae with 729 genera…

A member suggested the first four photos were Spiranthes cernua commonly known as Nodding Ladies Tresses. I had just begun to identify the wildflowers on the farm, so I readily agreed and I think he was correct. When I clicked on “agree”, the observation said Spiranthes cernua Complex… Little did I know at the time, when it comes to nature “complex” means complicated…

One thing weird that threw me off was Ladies Tresses grow in a spiral. Well, none of the plants in the hayfield, and there were several, were growing like that. Information for Spiranthes cernua from Missouri Plants says, “Flowers appearing as though in 2 or more ranks or intertwined spirals along the flowering stems or sometimes no spirals discernable.”

I spotted a group of Ladies Tresses on September 1 in 2019 close to where I spotted them in 2018. At the time, I really didn’t notice they were somewhat different, so I uploaded four more photos from that observation and selected Spiranthes cernua Complex. This time, the same member suggested Spiranthes lacera var. gracilis (Southern Slender Ladies’ Tresses), and another member agreed. I did some research and agreed then the observation became research grade. They were indeed different from the 2018 observation.

The flowers were much smaller for one thing… Sometimes when you are fairly new to wildflower hunting you don’t remember certain things from one year to the next.

One thing you don’t have to worry about is the leaves. They completely disappear on all but one species found in Missouri at flowering time. 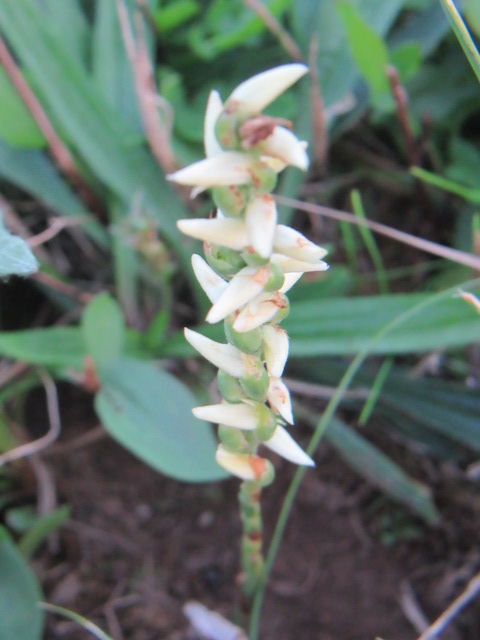 I had gone back out to the SOUTH hayfield on October 21 to see if I could find the Elephantopus again. Not only could I NOT find it, I found the critter in the above photo. Well, I knew it was a Ladies Tresses but its flowers hadn’t opened. I didn’t put the observation on iNaturalist because I figured it would be a guessing game and maybe no one would even pay much attention like that. The flowers help determine the species of any plant. 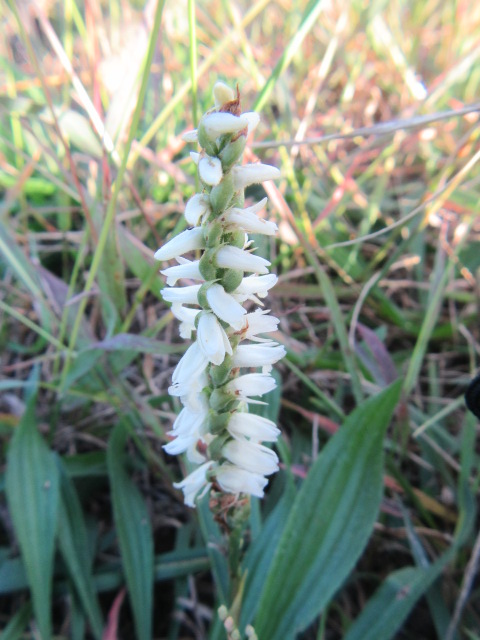 I went back the next day and took a few more photos, however, all but one were blurry. I submitted it on iNaturalist as Spiranthes cernua Complex, but no one visited that observation…

I went back on the 23rd to take more photos, determined to take some good close-ups of these small flowers. There weren’t very many of these plants to begin with, maybe 3-4, so I had to search for them. 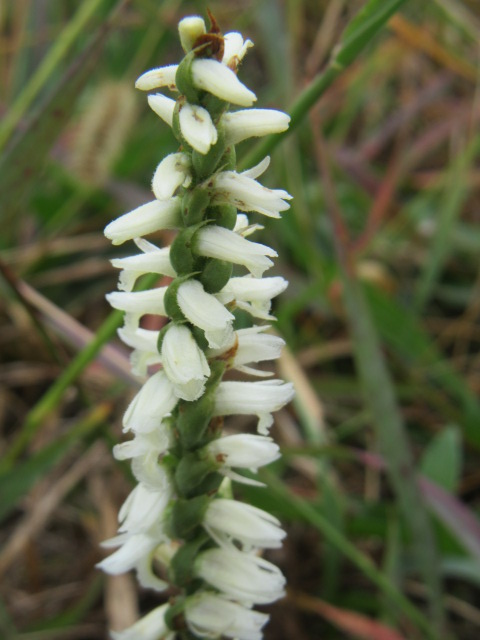 I had my magnifying glass with me to use on the front of the lens of my camera. It works very well, especially when you zoom in a little and get it focused. Practice makes perfect and you still have to take A LOT of photos. Especially of very small flowers. 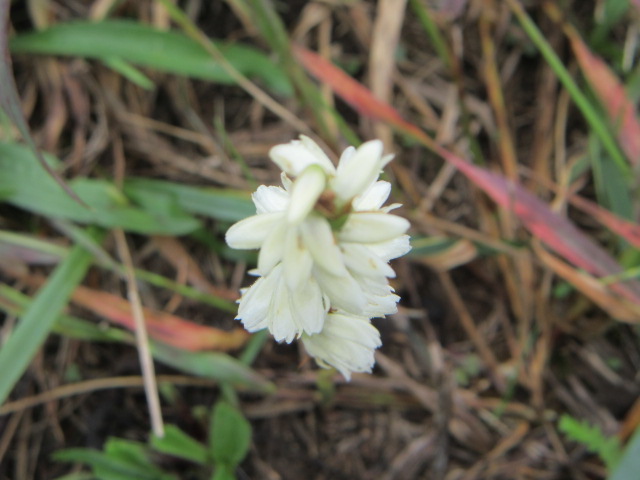 These plants were growing in a nice spiral which I think is caused by their flowers turning upside down during their development. I read that somewhere… 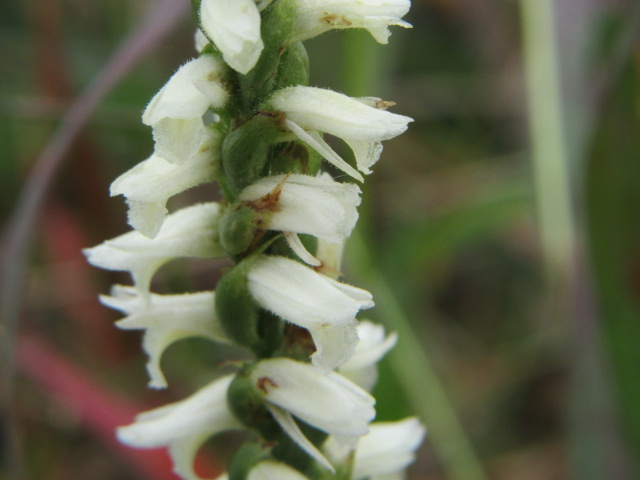 You can see the frilly lower lip in the above photo.

SO, I submitted the fine photos from the 23rd on iNaturalist as Spiranthes cernua. Wouldn’t you know, the same two guys from before both DISAGREED! One suggested Spiranthes magnicamporum (Great Plains Ladies’ Tresses) and the other agreed. SO, again, I did some research and there was a problem… The two upper sepals (one on each side) “should” spread more outward and sometimes curve upward a little. I put that in a comment, and one of the guys said they don’t always curve outward… SO, I did a little more research and found out he was correct. SO, I agreed and the observation became research grade.

You can’t read information from just one or two websites. You have to read everything you can find because some of what you read isn’t exactly correct or up-to-date. For example, some sites may have information on a species that is (or was) a synonym so their descriptions may be somewhat whacky. Spiranthes is a complicated genus that has been divided several times. Some species have their own varieties that act a little different than the species.

The Missouri Plants website is great and they use descriptions from Steyermark’s Flora of Missouri. However, a lot of plant names have changed since the last three volumes were published. Spiranthes magnicamporum was a synonym of S. cernua until 1973 because they are basically indistinguishable from one another. Both have yellow throats, but maybe a little bolder with S. magnicamporum. Both have frilly lower petals that curve downward. Both have relatively larger flowers than other members of the genus. S. cernua flowers from August-November, while S. magnicamporum flowers from September-November. The leaves on both species are absent at flowering, but Missouri Plants says they are reduced to scales on S. cernua white they are reduced to sheathing bracts on the other. I did notice the bracts on the stems of the S. magnicamporum… Both species have a scent, but I could smell nothing by the 24th after their flowers had started to turn a little brown…

OH, I almost forgot… S. magnicamporum is part of the Spiranthes cernua Complex which includes five species and a hybrid. Actually, two of the species are ancient hybrids as well.

I think it is interesting to have three species on my farm when there aren’t that many of them. In 2018, I remember there were quite a lot of S. cernua in one location. I also found it odd the S. magnicamporum are only in the south hayfield, while the other two were in the north hayfield. Strangely, these plants don’t grow in colonies (at least not here) but are quite a distance from one another and there is always just one stem. Since they are perennial, you would think there would be multiple plants together. But then again, there are many species that do the same thing.

Getting back to the Elephantopus I mentioned I was trying to find when I stumbled upon the S. mag. (getting tired of writing the species name)… I just happened to find a single plant, which I posted about earlier. I went back the second day and found it quite easily. I have looked for it multiple times since where I knew it was and could not find it again. There is a small oak tree (or what appears to be an oak in its photo) growing a few inches from it. They are parallel with the second utility pole in kind of a bare spot with dead grass… Both the Elephantopus and tree are MIA… It is so funny to find a single plant somewhere and needing to find it again and it is nowhere to be found. How can I find it twice and it disappears? Maybe a deer ate it and is somewhere laughing at me while I look for it. 🙂 I have waited for plants to flower before and the deer come along and eat the tops right off but there are usually plenty.

OH, on Sunday the 25th, I identified five species. Well, actually four since one is highly debatable. One is rare for this area and it is a single plant. How it got here is a very good question… They will be on the next post, but I need more photos of two of them. Hopefully, they won’t vanish. One sticks out like a sore thumb so I think I can find it again without any problem. 🙂

Until next time, be safe, stay positive, and always be thankful!