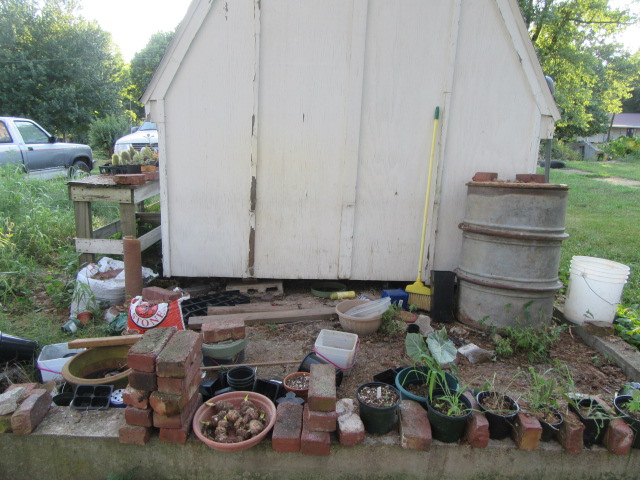 Abandon plant and potting area behind the shed.

Hello folks! I hope this post finds you well and enjoying our nice weather. I have to say nice even though it is plenty hot here. I have to keep it positive, you know. It could be worse and be -40 with 3 feet of snow.

The Japanese Beetle invasion left me a little bewildered for a while. I am normally very positive and enjoy life as it comes. I don’t worry even though I could, and maybe should sometimes. I think it is called avoidant personality disorder. Well, the mental health folks had to come up with a disorder to describe people who are positive minded, don’t worry, and realize most everything will work out just fine without getting worried or pissed off. We accept everyone has a right to their own opinion and find plenty of common ground. (Even though we know we know we are always right, we don’t rub it in. 🙂 )

Where was I? Oh yeah. I think I have said “What the hell!” more times in the past two weeks than ever before. If I had a psychiatrist they would tell me I am making progress. I had one of those moments today. NO! I had two! One this afternoon and one at about 12:30 AM. Oh, Crap! It is now 1:02 AM and I am just starting this post. It is already tomorrow! Oh well, that just means it is another day already and I don’t have to wait until I get up to start.

Alocasia ‘Portora’ on the potting table.

My sister and niece came down so I asked her if she could help me do something. She said, “Sure” without even knowing what I wanted. Then she asked. I told her I needed help moving the potting table and she asked where I was going to put it. I told her I didn’t know but had a couple of ideas. I went outside and looked at the options AGAIN (!). There were no good ones but I knew I didn’t want to leave the table where it was behind the shed. I would have too many of those “WHAT THE HELL” moments with no shade and all the dead leaves on the ground and constantly falling.

I decided the best place was on the back deck. I had to remove all the pots from the shelf and sweep all the dead leaves and beetle poop off the table. Then I stood the table on its end and then on its top and drug it to the back porch. I didn’t want my sister carrying it all that way.

After they left, I decided to try the new spot out. There are several plants that need to be re-potted, but I thought I better start with the pot that needed working on the most. A few days earlier I had gone to Wagler’s Greenhouse to see if they had some good sized pots for several Alocasia plants because I had run out of bigger pots. After all, I was going to take the plants to them anyway. Unfortunately, the pots I brought home weren’t big enough… I used to have plenty of pots! Where did they all go? Oh, yeah… I put plants in them and gave them away.

So, this afternoon, or yesterday afternoon since it is tomorrow already, I decided to put a few empty pots on the table and bring up a few other plants that needed attention. The Callisia fragrans (center pot), Agave univittata, two pots with four smaller Alocasia ‘Mayan Mask’, and a pot with a few smaller Alocasia gageana. I also brought the Aloe juvenna to the table after the above photo was taken.

One of the larger “plantlets”, or whatever you call them, of the Callisia fragrans had sprouted flowers. Very interesting, huh? 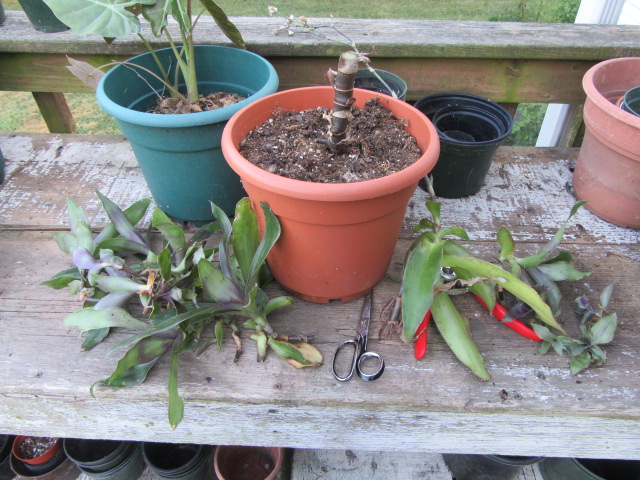 A week or so ago I removed one of Callisia fragrans kids and put it in a pot to see what would happen. Since it is doing just fine, decided to remove all the stems and cut the plantlets off. Some of them were not in very good shape, though. Normally, I would have put them all in pots but I decided to just save the better ones. I also cut the top off the main stem so it would regrow.

Now, there are 11! Make that 12 since the other one is on the front porch. PLUS the old stem in the bigger pot which I kept to see what it will do. I hate throwing a plant away! Once they start rooting I will give them away. Probably take them to Wagler’s since she gave me the start in the first place and she knows what they will do. Sometimes it is hard to give plants away if you tell them they multiply. A Spider Plant multiplies like this, so what’s the difference? 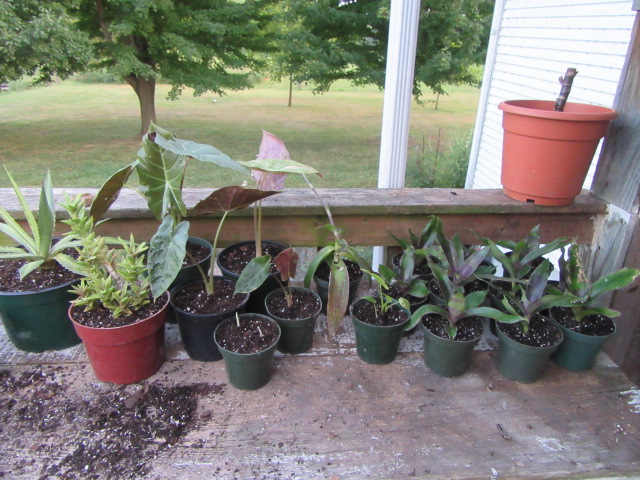 The new potting area is officially broke in. I made this table when i was in Mississippi from boards that were stacked in the old covered patio behind the mansion. The neighbor told me that they were from an old board fence that used to be around the backyard. I made a lot of plant tables for two of the sunrooms out of those boards.

After I finished re-potting, I went out to get a photo of the Hosta ‘Sum and Substance’ because its flowers are now open. On the way, I had my first “what the hell” moment of the day…

The Vitex agnus-castus ‘Shoal Creek’ is flowering up a storm and really looks AWESOME. At first, I thought it was LOADED with bumblebees because they were flying around the flowers. Then, I saw the Japanese Beetles! “WHAT THE HELL?” First the Chinese Elm trees, chewing the leaves of the Amorphophallus and Calla, the flowers on the roses, and now the Chaste Tree! Oh, they are on a few other trees down by the hay lot, too.

Then I walked over to the shade bed and took a couple of photos of the AWESOME Hosta ‘Sum and Substance’ with its first flowers. The stem is 34″ tall! 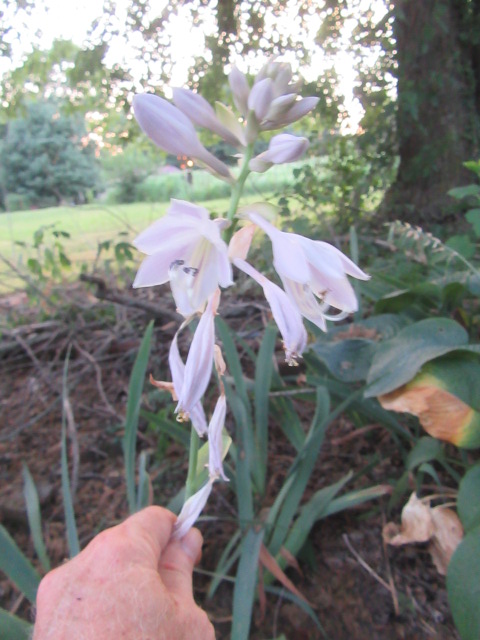 At 12:45 AM I walked by the sliding door on the way to the kitchen. I looked out the door and said, “WHAT THE HELL?” A mother Racoon with FOUR babies! The mother is a smaller Racoon and she isn’t all that wild. She may be one of the babies I took the videos of last summer. There have been several times I have sat on the back porch and she continued to eat cat food. Tonight, I couldn’t get a good photo, so I opened the door and turned on the light. She walked toward the steps then came back.

That’s it for this post! Until next time, stay well, positive, be safe and GET DIRTY!

10 comments on “Trying Out A New Potting Area, Etc.”