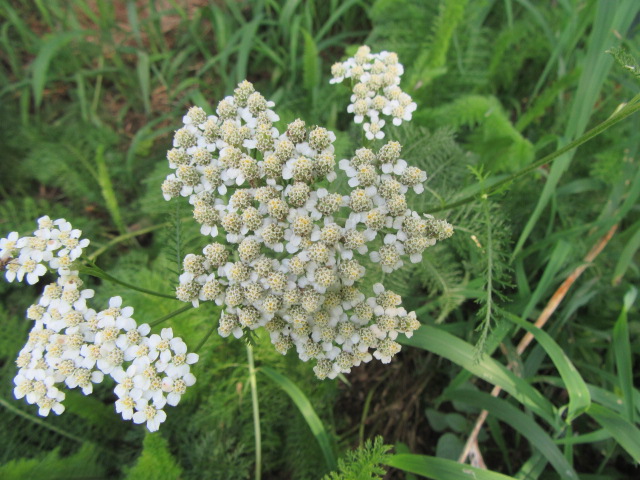 I bought a new camera in July (2016) and immediately went out and took 70 photos. Well, I had bought a lot of new plants, mainly cactus and succulents, so I had to do my thing. You know, make sure the names were right, write their history, take measurements and so on. The above photo is of the Achillea millefolium next to the side porch, which isn’t new by a long shot.

Since I started out this post with a photo of a plant I have had for a while, I’ll just go with that and catch you up on what I still have from before…

This photo is of the Alocasia ‘Calidora’ that I have had since May 2012. It is looking pretty good and it has a few kids now. 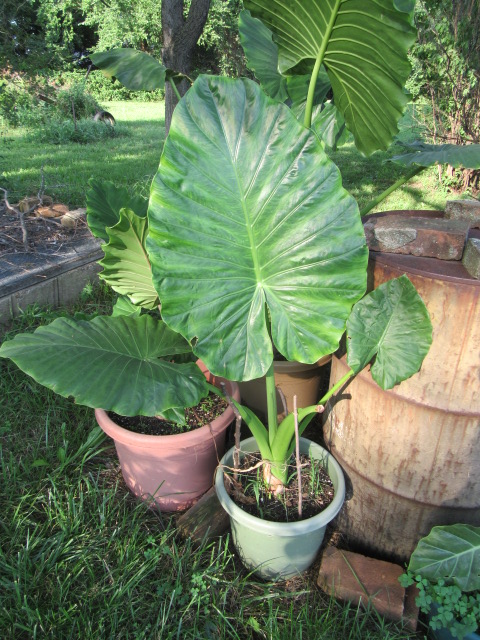 All three of these pots are Alocasia ‘Calidora’.

On this corner is the Alocasia ‘Mayan Mask’ family. The big one I bought in 2012. They are one of my favorites because they have dark leaves, white veining, and the maroon undersides.

This is one of the Alocasia ‘Portora’, descendants of one of my first Alocasia when I was in Mississippi in 2009. 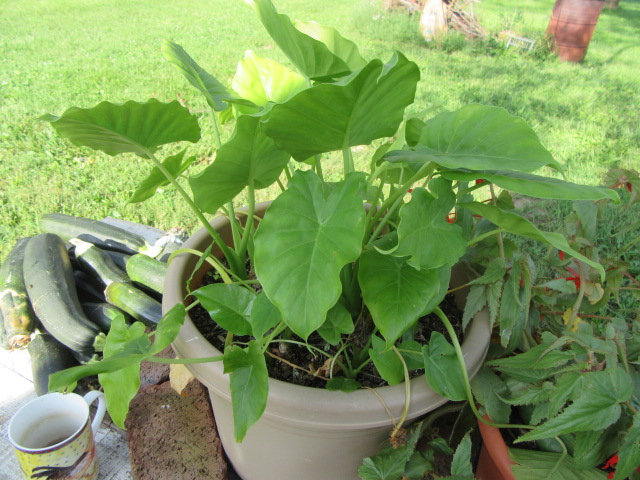 This is the pot of the, umm… Alocasia odora. I say “umm” because I am not so sure about that. I know you don’t remember the story behind this plant, but when I get to the pages of plants on the right, I will explain it again. ANYWAY, this Alocasia and I have some interesting history going back to 2012 in Mississippi.

OF COURSE, I still have the AWESOME Billbergia nutans (Queens Tears/Angels Tears) that was given to me, MUCH SMALLER, by my good friend Walley Morse of Greenville, Mississippi in 2012. For a couple of years now I have wanted to divide this pot. SO, last spring I removed it from the pot. I looked it over and put it back in the pot. I seriously need a bigger pot… This makes its 3rd pot. Where this plant is hardy they can make a large bed in no time. Right now, sitting in the basement for the winter, it is flowering again. I would love for it to be upstairs but I have no idea where I would put it.

Since I moved back to the farm in 2013 I have had the Colocasia esculenta in front of the chicken house, and a few scattered here and there. They didn’t do so well in front of the chicken house two years in a row, so I decided to put a couple of the bigger tubers on the north side of the house. They did much better. I put about 30 of the smaller tubers in the other yard next to the foundation of my grandparent’s old house. 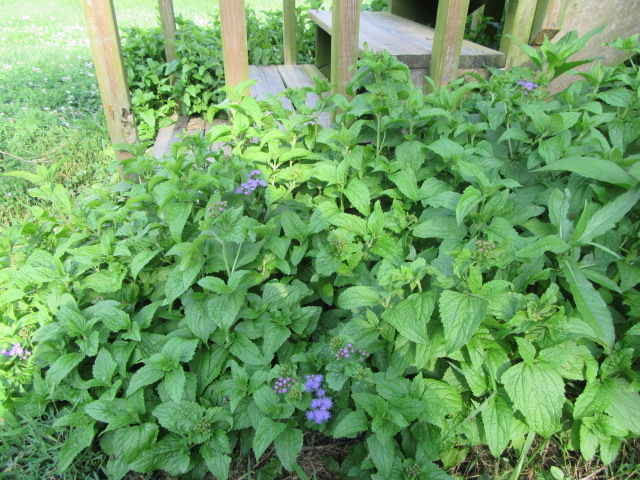 I am not sure when dad got his start of his Conoclinium coelestinum (Hardy Ageratum) from Aunt Inez (his mother’s sister). They come up on the other side of the steps in the spring better so I have to always transplant them to this side. More came up last spring than before so I moved some to the south side of the house along the basement steps. This photo was taken on July 19, 2016, so they are just starting to flower. 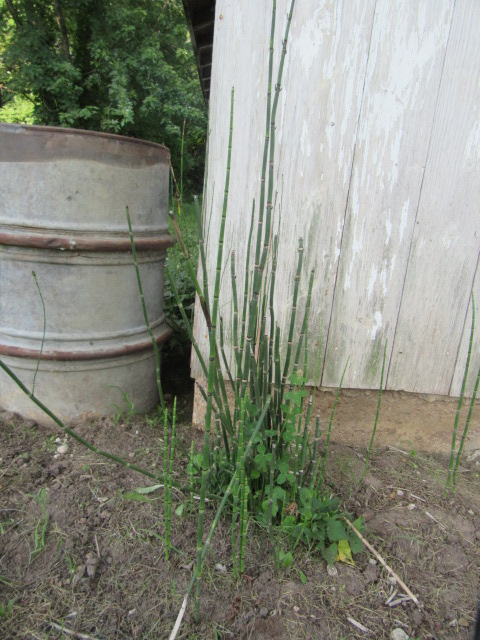 This is the Equisetum hyemale (Horsetail) I dug up from Augustine Taylor’s yard in Leland, Mississippi in 2010. I had them in a pot until the spring of 2014 when decided to put them in the ground in front of the chicken house. I told dad they are called Horsetail and they gallop… This photo was taken on July 19, 2016, and as you can see they have started to gallop. They would make a great accent plant here and there in flower beds, but GEEZ!!!

Hosta ‘Guacamole’ that was added to my Hosta collection in 2014 still doing well.

Hosta ‘Potomac Pride’ bought in 2009 still doing well and getting BIGGER every year. It is always the first to flower, too. OH, and the deer sampled a few of it’s leaves one night and never bothered the Hosta again… THANK GOODNESS!!! 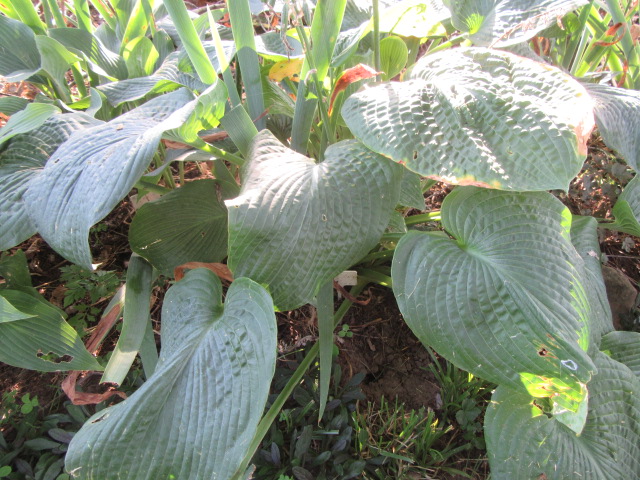 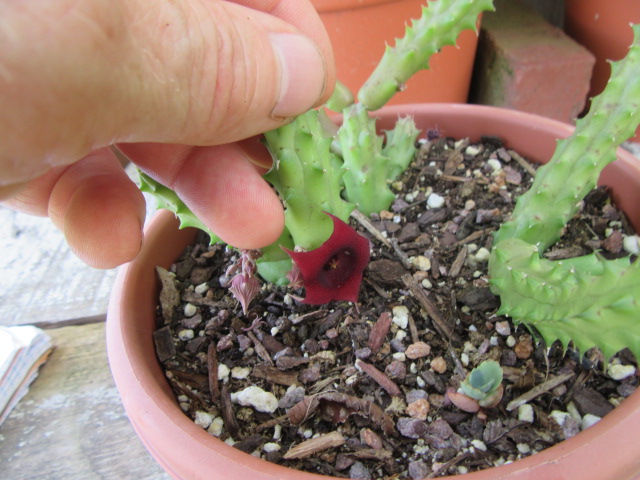 This is the second pot of Hernia schneideriana. You may not remember, but the first one was in 2014 when I had the blog before and Kate told me it was a Carrion Plant. Well, I had got it from one of the Amish greenhouses and she has A LOT of plants with no labels. Even when I tell her the names, she still doesn’t label them… SO, after some research, I found the scientific name. Well, It had to flower first because there are MANY genera and species of Carrion Flowers that look exactly alike until they flower. Most of them have very colorful HUGE flowers but this particular one has among the smallest. VERY FUNNY!!! 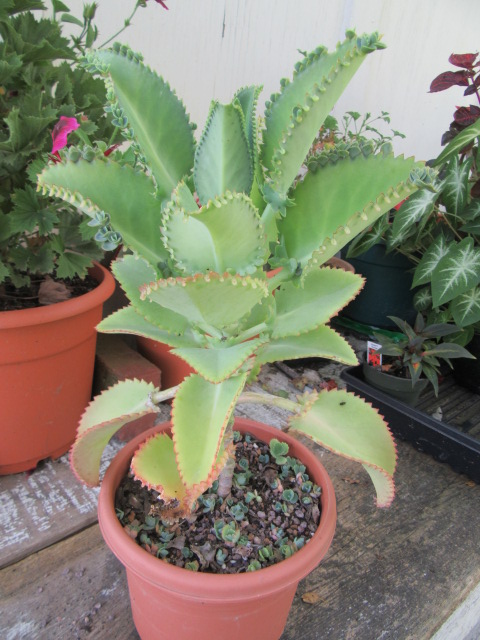 Oh, yeah, I still have the Kalanchoe x laetivirens (Mother of Thousands. She needs birth control even though there are no men like her around. These Kalanchoe’s, and the other species that grow “plantlets” from their leaves have an interesting story. I will get into that later because I kind of forgot the whole story… 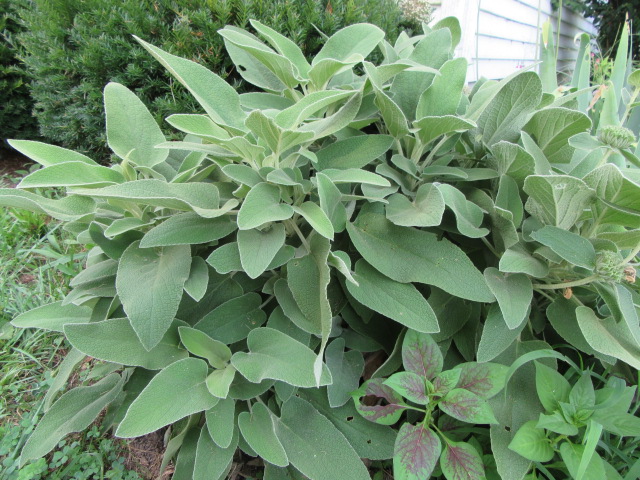 Since I bought my Phlomis ‘Edward Bowles’ (Jerusalem Sage) in the spring of 2013, I just can’t imagine life without it. It is just an AWESOME plant! I always cover it up with a large pot and put with leaves around it. BUT this fall I forgot to do that so I HOPE it comes back this spring.

The first flowers were better looking but I didn’t have a camera then. There are really weird!!! 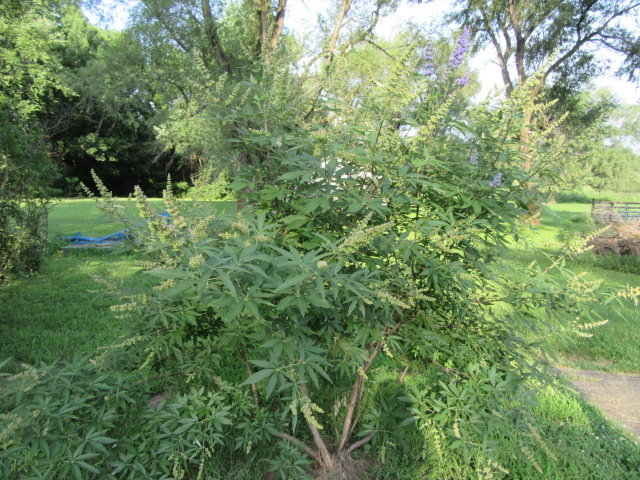 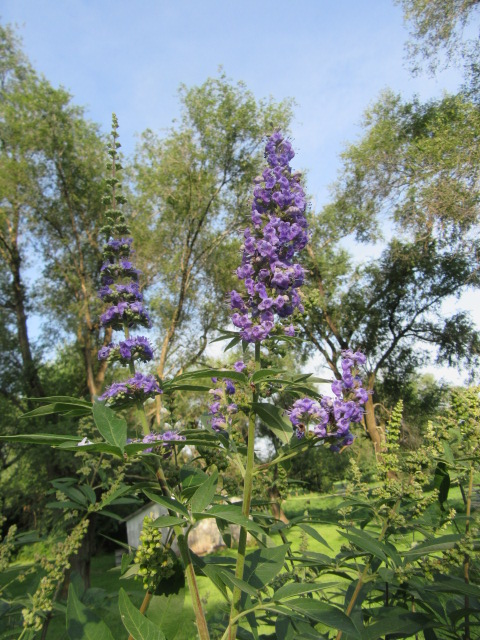 Last in the alphabet of photos taken on July 19, 2016, is the Vitex agnus-castus ‘Shoal Creek’ I also bought in the spring of 2013. Looking very good and flowers like mad. The flowers smell like lilac.

You know, it felt really good taking the time to make this post, even though the photos are from last July. Makes me feel like the Belmont Rooster again. Maybe the name of the blog should be “THE BELMONT ROOSTER RIDES AGAIN!”. I have a lot more photos to catch you up on, so…. Until next time, TAKE CARE AND GET DIRTY!!!

2 comments on “Time To Catch Up”