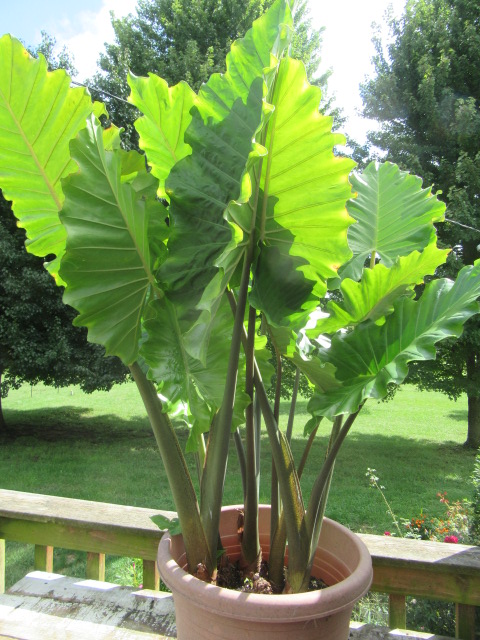 Alocasia ‘Portora’ waiting to be separated…

Hello everyone! I hope you had a great weekend. We have had several days of rain and seeing the sun was a welcome site. Even though we needed the rain and I am grateful for it, I didn’t get much done outside. Thursday and Saturday I went for a walk and took quite a few wildflower photos. I am still working on identifying a few so that post will be ready on… Well, I better not say when because it might not happen that day either. 🙂

After church, I decided it was a good day to separate the Alocasia ‘Portora’. I couldn’t think of anything else to keep me from it (as I hoped), so I put the pot on the potting table. Then I went to get the wheelbarrow to mix soil in. Since the new bag of potting soil was in the garage, I thought it would be a good time to air up the tire then use it to move the bag to the back porch. After the tire was aired up, I thought maybe I should go ahead and air up the front tire on the tractor. Well, I went ahead to the back porch.

Then I remembered I needed to water the chickens. It was such a nice day and the chickens had not been out for a long time. Since I was going to be on the back porch I decided it would be a good time to let them out for a while. Talk about happy chickens! They were so glad to get outside! 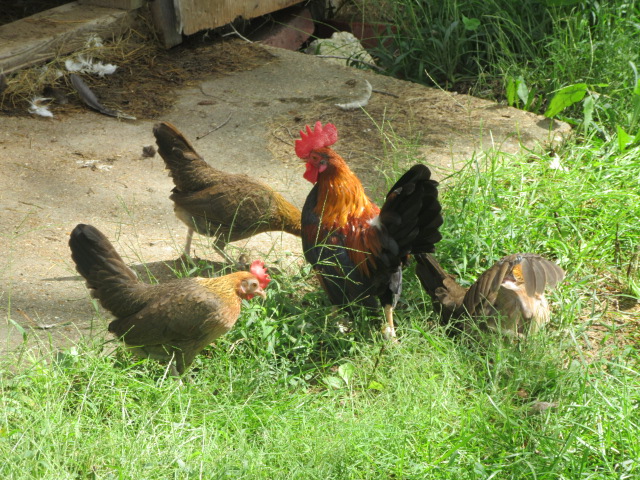 Once the big chickens went around the chicken house I let out the Old English Game Bantams. They were also very happy to get out. One of the hens wasted no time stretching out in the sun.

OK… What else can I do before I start on the Alocasia?

I couldn’t think of anything else so I went to the back porch. There were five pretty large plants that needed to be separated plus a couple of very small plants. The old bulb in the center finally went all the way dormant and part of it has rotted. Well, it is several years old… It “was” the Alocasia ‘Portora’ I chose to bring with me when I moved back here in 2013. It was removed from its mother’s pot in 2012, I think. Its mother was the original Alocasia ‘Portora’ I bought from Wellspring Gardens (in Florida) in 2009. She was so HUGE when I left Mississippi in February 2013 I decided to leave her with a friend. Little did I know then, I could have just cut the leaves off and brought it with me…

Then I had to get the pots Mrs. Wagler gave me a couple of weeks ago for the plants. She also gave me some “previously used” potting soil to mix with the new potting soil. Since they foliar feed, and since four of these plants will be going to Wagler’s, there wasn’t any point in putting 100% new potting soil with timed-release fertilizer in those pots. 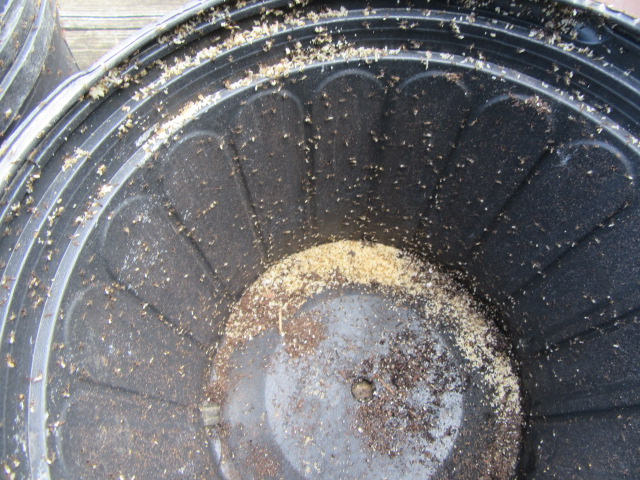 When I started separating the pots I found a good-sized nest of ants in the bottom pot. I found one a few days earlier in a smaller pot, too. GEEZ! Every fall when I bring plants inside for the winter there is always one that has a nest of ants in it.

After I mixed the potting soil, I took the pot of Alocasia ‘Portora’ to the wheelbarrow and removed the plants from the pot.

There were a lot more roots, but you always lose a few when you separate the plants. They will grow more roots and be just fine. It is much easier to remove the plants when they are smaller, but I almost think they do better when they are larger. I have been doing this for almost 10 years and I have great success either way. Smaller plants have a tendency to go dormant in the winter and sometimes they don’t recover. 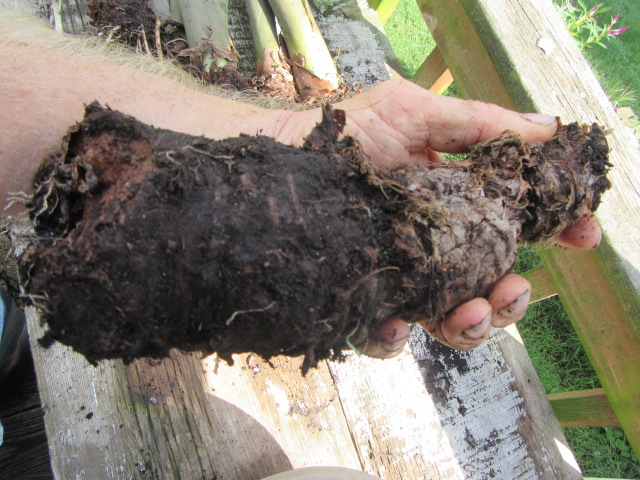 Most of the dormant bulb had rotted but the top part and part of the bottom are still solid.

Susie Q jumped on the table to see if she could help. She didn’t stay long, though and was content watching from the railing. You can see the yellow tom cat is curled up in a box sleeping in the bottom left corner of the photo. He likes getting inside of anything snug to sleep, even empty flower pots that are barely big enough for him to curl up in.

Alocasia doesn’t have a really extensive root system but they do need a large enough pot to hold them up. You can put them in larger pots right from the start, but I have found I like to “pot-up” as they grow larger. Once I get the plant in the position I want them, I will up the pot with soil then put three stakes in the pot and tie the plants to them. The stakes keep the plant in the center and standing upright until their new roots can hold them up.

I had filled several pots with the potting soil I mixed and when I went to get the second one there was a tree frog on one of the rims. We have LOTS of tree frogs and you are liable to see them in the strangest places during the day. One day there was one sleeping on top of the handle to the screen door. One even liked the doorknob on the garage door. Come to think of it, I have several photos of them on doorknobs and the door handle to the shed and chicken house.

I removed the top part of the rhizome and put in its own pot as well as the smaller plants. 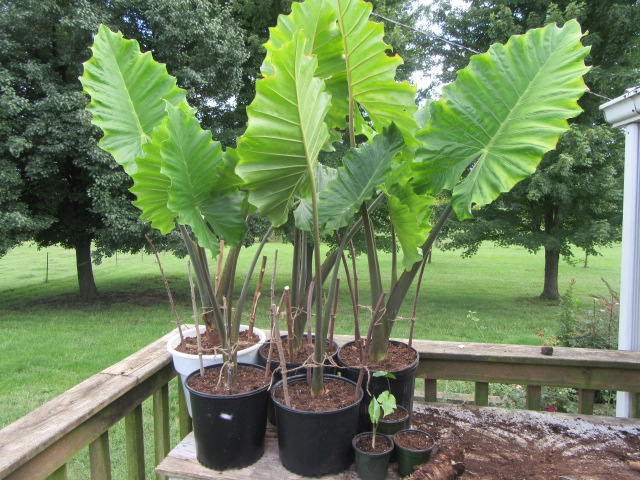 Well, the seven Alocasia ‘Portora’ and the top part of the tuber (bulb…) all have their own pots now. I will take the four bigger black pots to Wagler’s and keep the others. I also have a couple of other Alocasia ‘Portora’ besides these. Of course, there are still several pots of Alocasia gageana, ‘Calidora’, and ‘Mayan Mask’…

I could have stopped there and called it a day but SOMEONE is giving me the eye and tapping its foot…  Someone is actually not a single being, but many now, who have been patiently waiting for… Ummm… How long? I can hear them whispering among themselves. I heard one of them say, “Why did he put us on the back porch last month? Wasn’t it to remind him we needed new pots of our own?” I also hear, “No, maybe not. I think it was because of the Japanese Beetles. But he did say he was going to give us our own pots.” 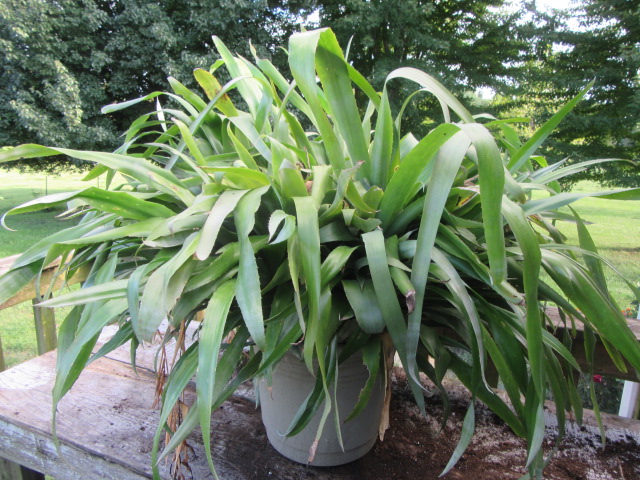 Let me see now… How many times I have upgraded the Billbergia nutans (Queen’s Tears/Angel Tears) pot? I have only had a few bromeliads as companions and this one is by far the most AWESOME! I am grateful to Walley Morse, a good friend and fellow plant collector from Mississippi (who I have mentioned MANY times), for giving me the start of this plant. No doubt the original cluster is in the middle of this pot somewhere. It will NOT die. Billbergia nutans may be one the most indestructible Bromeliad in the history of mankind. (I have to butter it up because it has been waiting for so long).

I took it out of the pot a few years ago and put it back in… It was packed then and it just keeps on keeping on. What would it be like if I lived in a climate where it wouldn’t have to be in a pot. Well, just check online and you will find out. These plants are actually grown as a ground cover… To top that off, check out their page on the right by clicking on its name (above) and you will see their AWESOME flowers.

The reason I keep putting off doing anything with this plant is because I had no clue what to do. How do you separate such a mass of plants and roots? I mean, they are packed in this pot much tighter than sardines in a can! What if I kill it?

OK, so that is just an excuse, right? After all, I am The Belmont Rooster… 🙂 Walley called me his “gardening guru” on the answering machine so I guess I better live up to it, huh? What would he think if the plant he gave me is cramped in this pot? Oh, no! He may even read this post!

I heard something jump on the table and looked down to see the tree frog had made its way to the table. He found a pot to scoot under.

So, I removed the, ummm, plant from the pot. With all the rain we have been having, the roots were completely soaked. The last time I did this, maybe in 2015 or 2016, it was dry and the roots were white. It appeared the bottom half of this mass was mostly rotten. Hmmm… I wonder if the good roots are feeding off of the old rotting roots. I would like to say I never had a plant get this root bound before, but that wouldn’t be true. I will never forget the Parlor Palms… If you have a Parlor Palm and it has been in the same pot for a couple of years, it’s time for a larger pot… Trust me. 🙂

Sometimes when you are unsure of what to do, just do it anyway. Making mistakes and learning is just part of life…

So, I went ahead and took a big butcher knife and removed the lower half of the roots. The last time I did that was with the Parlor Palms in Mississippi. I only removed a few inches from their roots, though, and they did NOT approve.

But the Billbergia nutans is a completely different type of plant than Parlor Palms. The butcher knife, even though dull, easily sliced through the mass of roots. Then I started slicing what was left in half. Now that was a different story… I did get it cut in half, then quarters, and so on. It appears this plant is all connected… but separate. 🙂 After all, they do spread by rhizomes…

Ummm……….. I think they expanded after I took them out of the pot! How did they all fit in the pot? The clay pot on the left is the original pot Walley gave me my start back in 2012… The pot on the right is the one they just came from… It could have easily filled one twice that size by now.

I put the largest cluster in the pot I just took them from and the rest I will give away. They can easily be divided even more… They are much happier now and have some soil to sink their roots in. I will wait a while before I pass these on because I want to make sure they will be OK. (If you know what I mean. I have to whisper because I don’t want them to think I have any doubts).

After I finished repotting, I took a few photos around the house… It is 1:03 AM, so I think I will post them tomorrow… Oh, crap! I have to finish the wildflower walk first…

So, until then, be safe, stay positive and well, take care, be AWESOME and GET DIRTY!