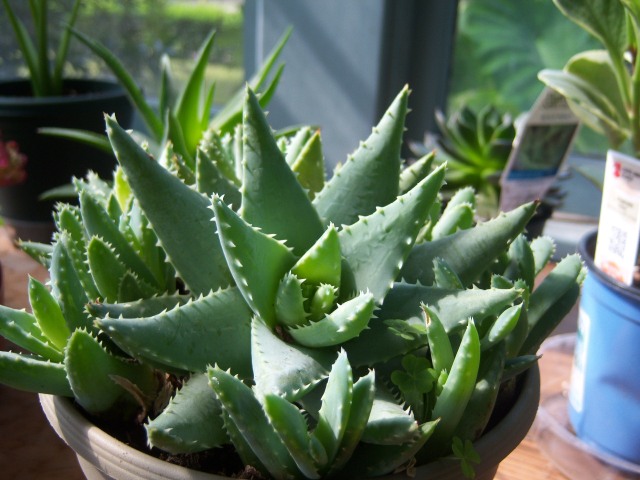 Aloe brevifolia Mill. is the correct and accepted scientific name for the Crocodile Aloe. It was described by Phillip Miller in Garden Dictionary in 1771.

The genus, Aloe L., was named and described as such by Carl von Linnaeus in the first edition of Species Plantarum in 1753. Plants of the World Online lists a whopping 578 species in the Aloe genus (as of 11-10-20 when I am updating this page.

Be sure to check out the links at the bottom of the page for further reading. 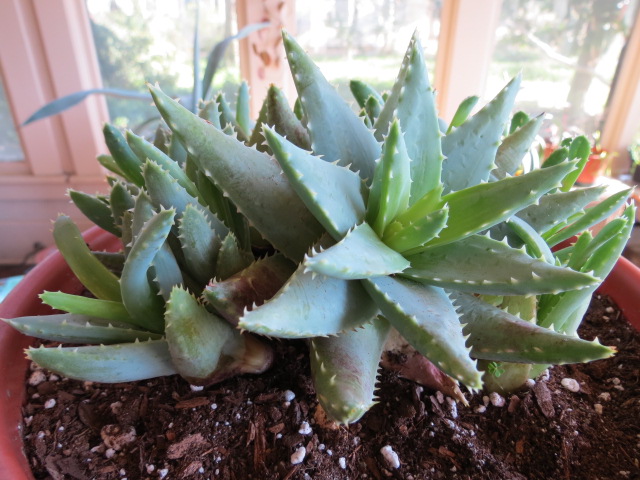 When I was buying plants at Lowe’s and Wal-Mart in Greenville, Mississippi in August 2012, I only wanted to pay up to $3.00 per tiny pot. There were a few bigger pots of Aloe brevifolia at Lowe’s, but they were around $10.00 a pop. SO, I took an offset and brought it home. That didn’t work so well because it soon died. Hmmm. Hardly ever happens. SO, after it died, I went back to Lowe’s and bought one of the larger pots… It was very overcrowded, so I put it in a larger pot…

I was doing some yard work for a friend in Mississippi and noticed she had this AWESOME Aloe brevifolia in a planter in her backyard. She said it overwintered there even though we were in USDA zone 8a.

I moved back to the family farm in mid-Missouri in February 2013 and I brought most of my succulents with me. Most of my plants were in the back of a trailer and it was around 30 degrees the entire 8-9 hour trip. I had no idea what I was going to do with them when I arrived, so most of them had to go into the basement. Surprisingly, most of them did fine in the basement with low light and 65-degree temperature. The Aloe brevifolia not only didn’t like the trip, it didn’t appreciate the basement.

The Aloe brevifolia was so happy to be outside when spring came. Now we can all get used to a completely new environment. It asked me if it could be moved into a smaller pot, which I thought was weird. I never had a plant make such a request before since they are usually wanting a larger pot. So, I put it in a smaller pot…

Aloe brevifolia is native to South Africa north of Cape Agulhas to the east of Cape Town. Information suggests it gets most of its rain during the winter months. The area it is native to is being used more and more for agriculture, so it is listed as an endangered species. It now grows mainly in small areas on slopes and rocky areas where it has adapted to avoid fires.

I am not sure what the deal was with this plant. It was outside in a smaller pot but it was NOT happy. Maybe it needed more sun.

This species is a clumper that forms rosettes that seem to build on top of each other to about a foot or so tall.

It did start looking better toward the end of the summer, but then, colder weather was approaching.

SO, toward the end of October, all the potted plants outside had to be moved inside. Most of the succulents were moved to a table in my bedroom. Well, it didn’t like it… 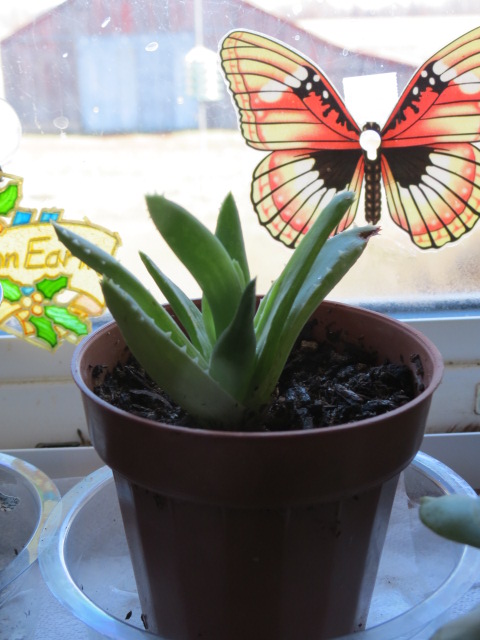 I put an offset from the bigger plant on the kitchen windowsill with several other succulents.

I gave up most of my plants late in the summer of 2014 then started back up again in 2015. I am not sure if I will try another Aloe brevifolia unless I have more suitable conditions for it. It did seem a bit difficult for me are I rarely have difficulty with any Aloe and their relatives.

*During the summer, I keep most of my cactus on the back deck where they receive full sun. During the winter most cactus aren’t picky about the light because they are basically dormant. For several winters, mine were in front of the east-facing sliding door in the dining room so they didn’t get much light but they did great. I built a new shelf for the bedroom so now they are in front of a west-facing window. Most of the succulents are on a shelf in a south-facing window in a cool bedroom but a few are in my bedroom. I keep my Aloe and most of the succulents on the front porch in light shade although they do receive direct sun a couple of times during the day (depending on their location on the table). I don’t put them in full sun because I don’t like their leaves to burn. They get enough light to have nice dark green leaves without stretching.

***I water my cactus and succulents on a regular basis during the summer but barely ever in the winter (maybe a little in January) but it all depends on the plant. The leaves on the succulents will tell you when they need a little water… Aloe store water in their leaves and can go for a long time without additional water. If they are dormant in the winter, they don’t need much water… Better to be safe than sorry.

I hope you enjoyed this page and maybe found it useful. If you have any comments, questions, or suggestions, I would like to hear from you. Please click on “like” if you visited this page. It helps us bloggers stay motivated. 🙂 You can check out the links below for further reading. If you see I have made an error, please make a comment and let me know. You can also email me at thebelmontrooster@yahoo.com.