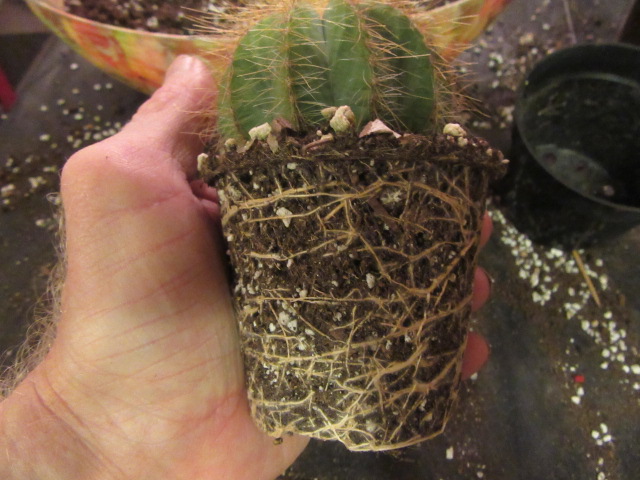 Hello everyone! I hope tis post finds you well. There were a few cactus and succulents that needed repotting because they needed larger pots. Then, there were a couple that I needed to investigate. I think repotting in the fall is a good time so the potting mix stays nice and loose over the winter. Since I use mainly Miracle Grow Potting soil with a lot of peat, sometimes it can become kind of hard during the winter when I am not watering my cactus and succulents. If this happens, I remove the plant from the pot, remove the old mix and add fresh. Since I switched from using 2 parts potting soil with 1 perlite and 1 part chicken grit to using about 50% potting soil and 50% pumice it seems the mix has remained looser. I know many cactus and succulent enthusiasts say peat is a no no, but it has worked fine for me.

In the above photo, the Parodia magnifica has a nice set of roots. It gets to be the first example 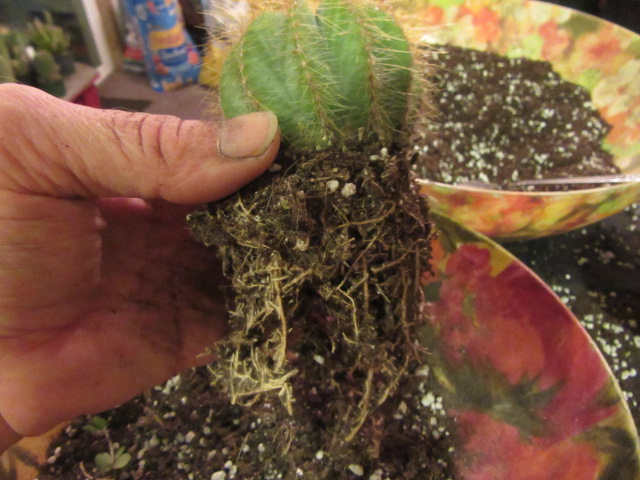 Some cactus don’t grow a large root system but they still need repotting as the “stem” starts to fill the pot. There was still plenty of soil in the bottom of the pot with this Parodia magnifica but the stem had become almost as large as the pot. 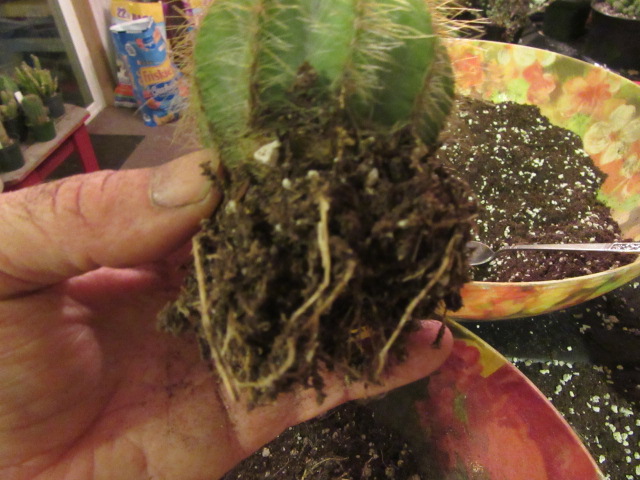 In years past I would just take the plant from one pot and put it in another without doing anything with the roots. Then later, when I repotted again, sometimes I found the roots still tightly packed in its original wad. So, I started loosening the roots before repotting and sometimes trimming off a few on the bottom. They grow new roots and a little trimming doesn’t bother them. Sometimes you may find rotten or dried roots that need to be trimmed as well. 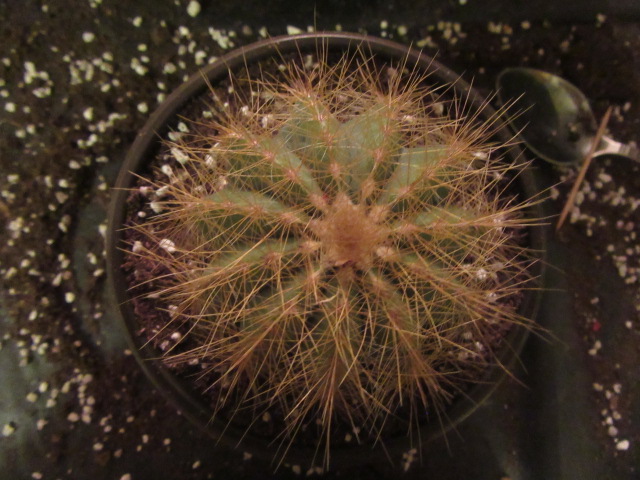 Then I always make sure the plants are centered in the new pot. 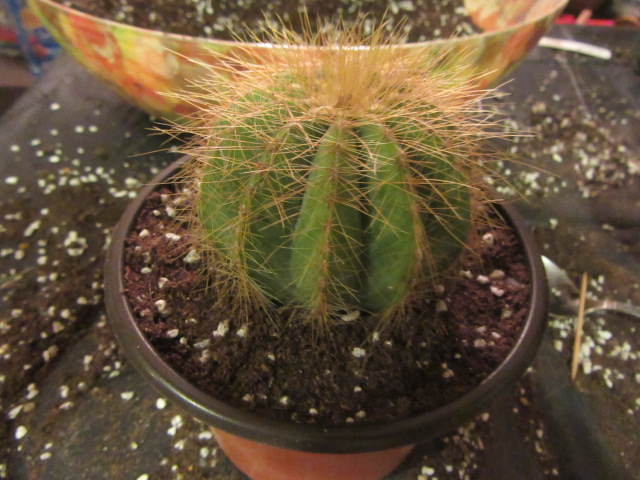 Here the Parodia magnifica is happy in its new pot… Normally, I only increase the pot size by 1 inch but sometimes I can’t find the right size of pot. I have LOTS of smaller pots so there is always a good selection. You can find pots in quantity on Ebay and Amazon. Of course, you may want a nicer pot… 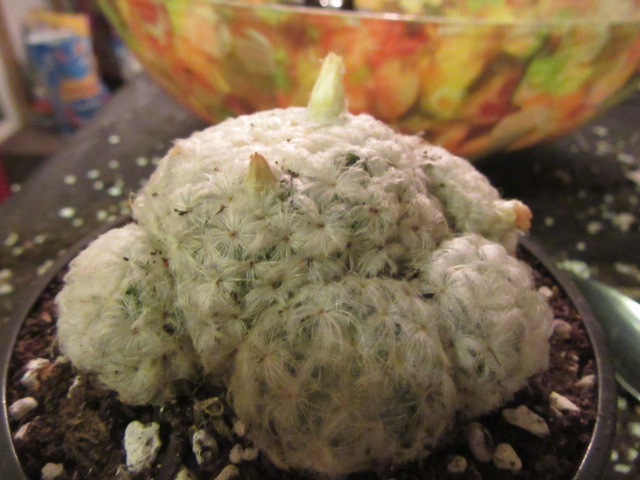 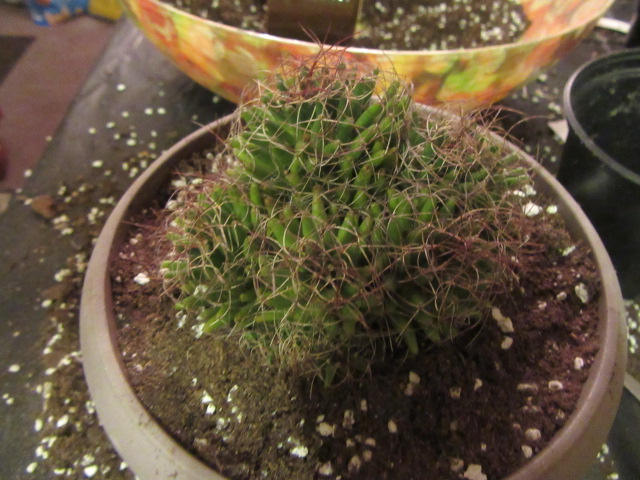 I know this pot seems a little large for the Mammillaria decipiens, but I am expecting another growth spurt. After repotting, I read this species of Mammillaria should not be planted in a peaty mix because it grows naturally in canyons and hills generally in volcanic soils… Llifle says “It likes very porous mineral substratum and avoid the use of peat or other humus sources in the potting mixture.” Hmmm… I read that when I was updating its page last week. Llifle also says, “Outside filtered sunlight or afternoon shade, inside it needs bright light, and some direct sun. Subject to sunburn if exposed to direct sun for too long. Does better than most species in lower levels of light, but still prefers bright light or morning sun.” Well, it was growing on the back porch in full sun and did awesomely well. I am wondering, though, if I should have added more pumice to its mix… Maybe some chicken grit as well. 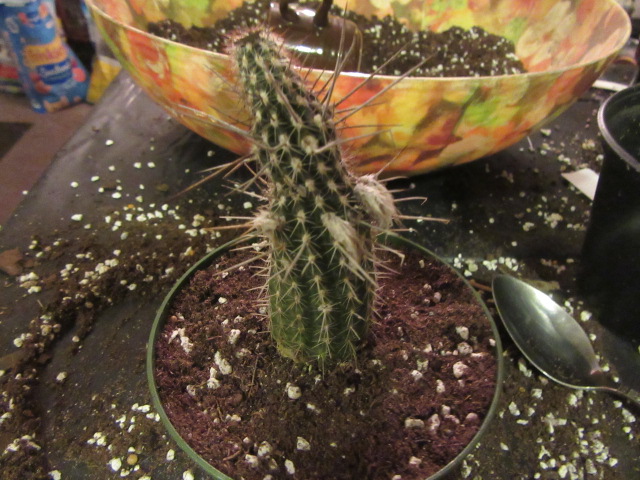 I finally decided to increase the pot size for the Echinipsos mirabilis since it was still in the tiny pot it came in. According to information, this species may be short-lived but only time will tell. It is also said, that although short-lived, it leaves behind many seeds that will come up. Well, I kind of screwed that possibility when I repotted, huh? 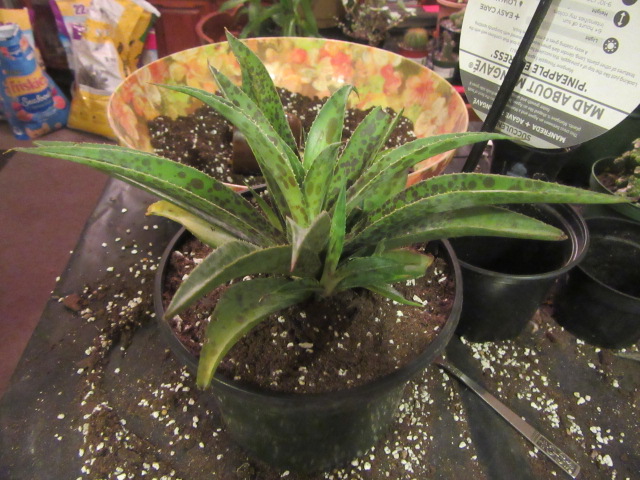 I figured since the Agave (x Mangave) ‘Pineapple Express’ was an Agave it might have a lot of roots by now. I was right… It also has several pups. NICE! 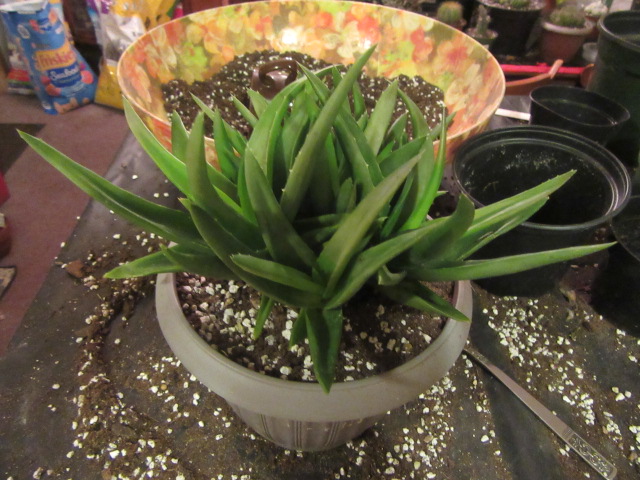 The x Alworthia ‘Black Gem’ grew a lot since I last repotted it, so I thought I would upgrade it again. But, I forgot something which I didn’t think about until after I repotted the Haworthioposis limifolia… It came from Wildwood Greenhouse and he buys a lot of plants in plugs. I forgot to check to see if there were remains of the netting from a plug. 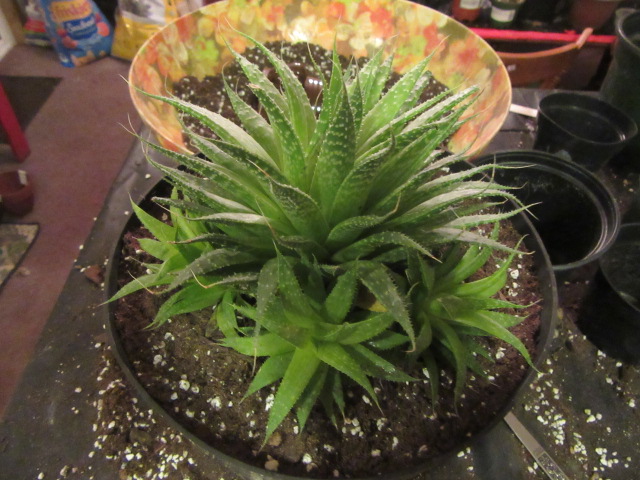 The Aristaloe aristata (Lace Aloe) was giving me the “look” so I wouldn’t forget about her. I told her I repotted her before but she said it was time again. Sooo… Now she has a larger pot. 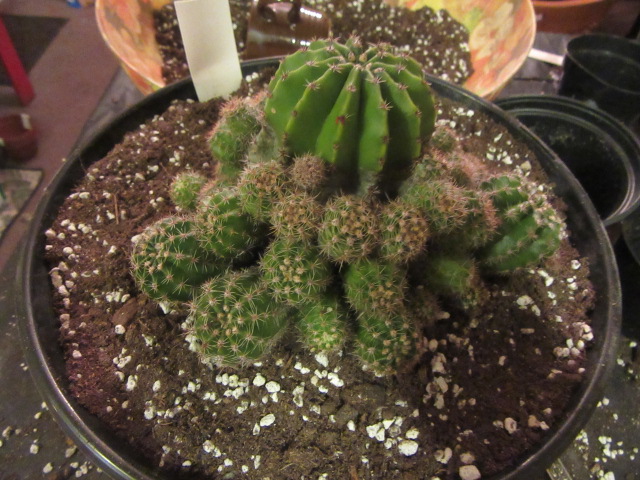 What can I say? I may have gone a little overboard with this one but she said she needed to wean her kids. She said she was tired of them clinging to her. I said OK if she promised to give me a flower. I think she is crossing her fingers and toes. 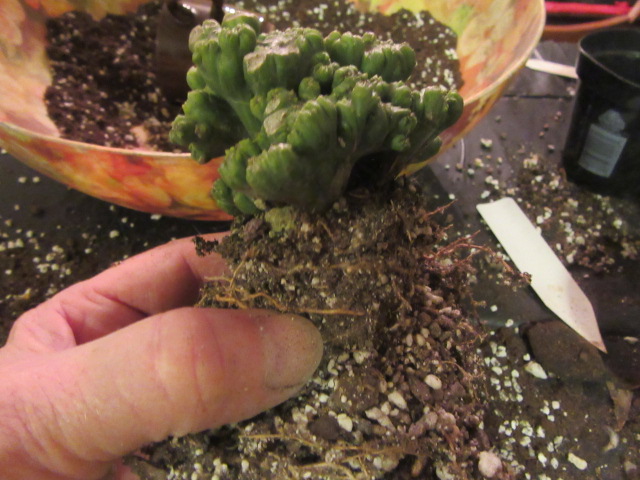 Hmmm… I hate to tell you, but I severely neglected the Cereus forbesii f. monstrose ‘Ming Thing’. I knew from the previous and much larger plants I had for several years that they don’t have a very large root system and they grow VERY SSSSLLLLOOOOWWWWLLLLYYYY. So I didn’t repot since I brought it home in a tiny pot from Wal-Mart in, ummm… GEEZ! It has been since 2016! It is STILL the same width as when I bought it home at 3 1/2″ wide. It has grown 1/2″ taller to 3 1/2″. 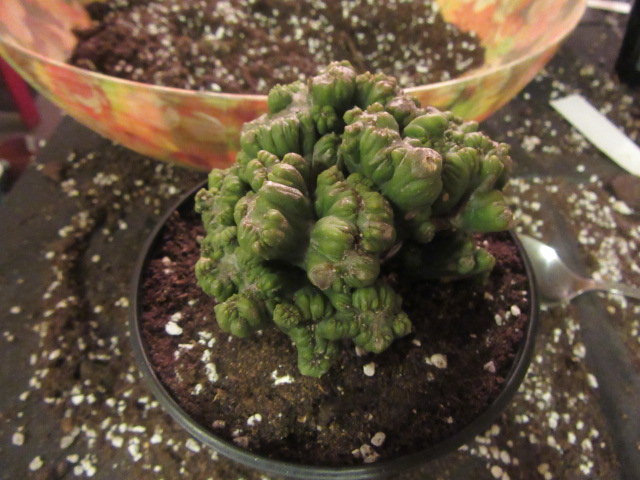 Its soil was very hard and dry so I replaced it then put the cactus back in the same pot. Maybe it will grow now. 🙂 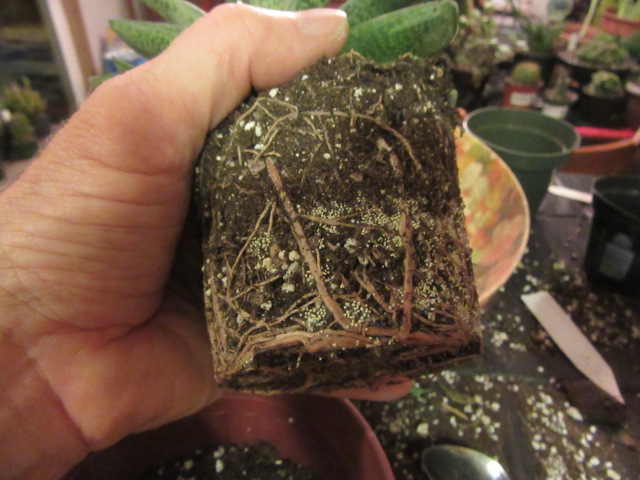 I decided the Gasteria twins with no name should be in another larger pot. This is its second upgrade. I noticed something weird when I removed it from its pot that I have never seen before. 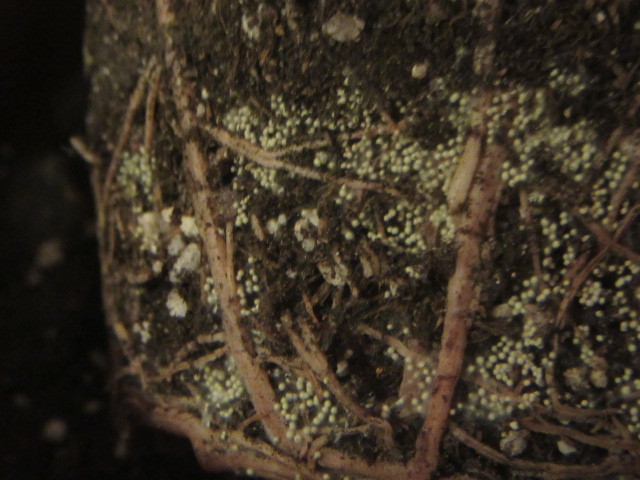 A few weeks ago I saw a post on Succulent Dreamers where a member had posted about the beneficial bacteria (of some sort) growing on the roots of his plant. I thought that was pretty neat and had not seen it before in pots. Actually, it is mycelium which is a “friendly” fungus. Come to think of it, this is the first year I haven’t had ants in at least one pot. I think that is because the pots were on the porches. 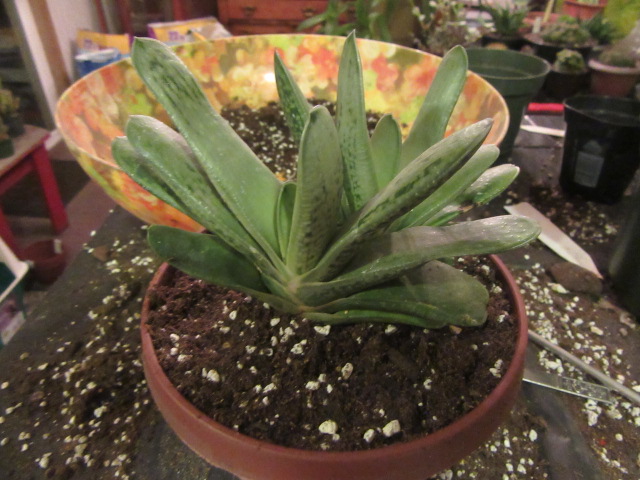 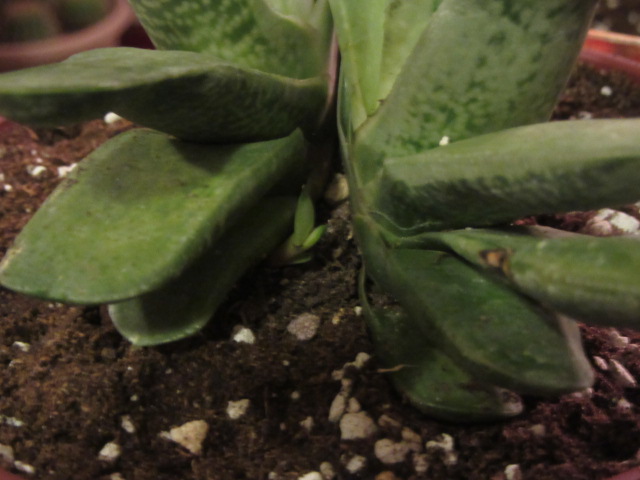 With their new child. 🙂 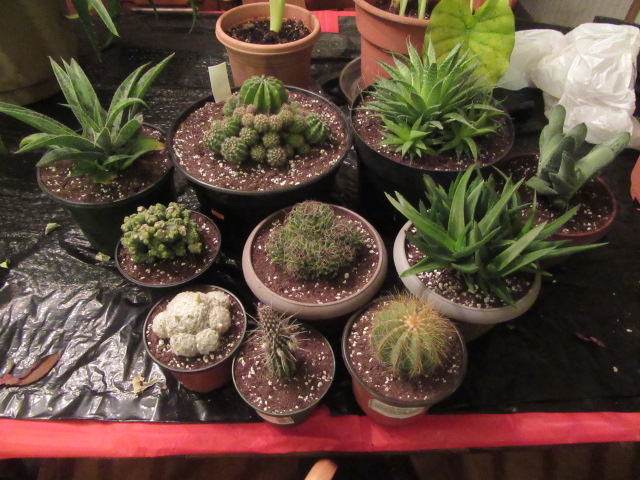 This is a group photo of the plants I repotted on November 13. But, I wasn’t quite finished… 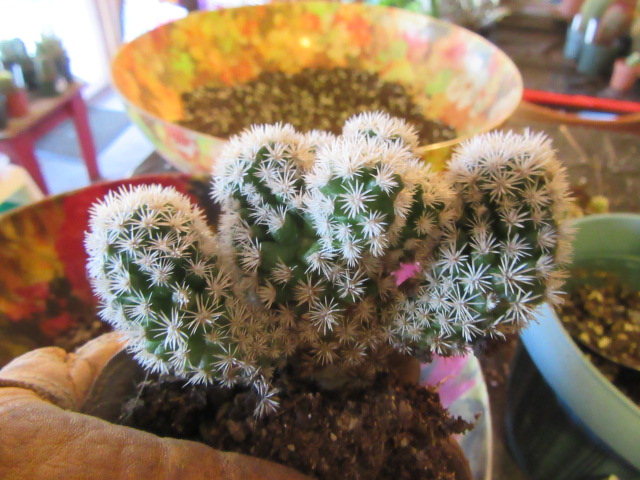 On the 16th I decided it was high time I worked on the Mammillaria vetula subsp. gracilis ‘Arizona Snowcap’. 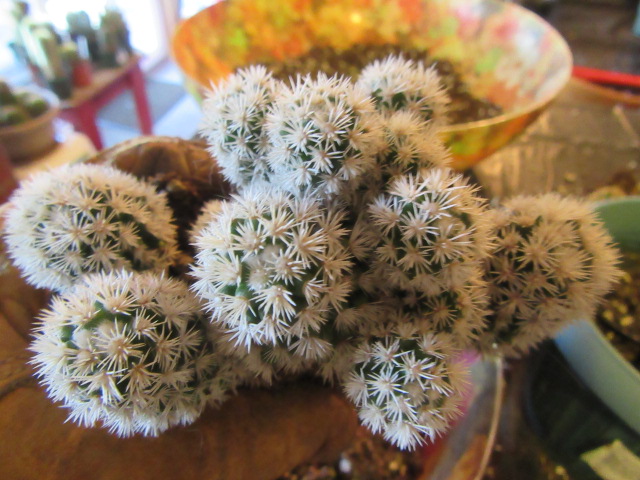 I posted before how several of the plants in the colony had died… The ones that were nearly all white. 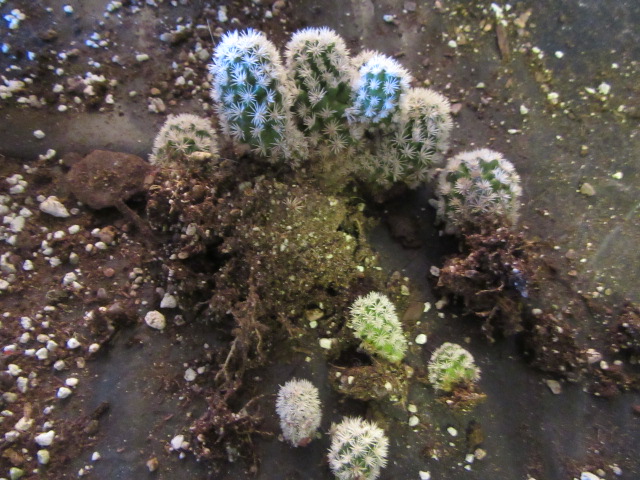 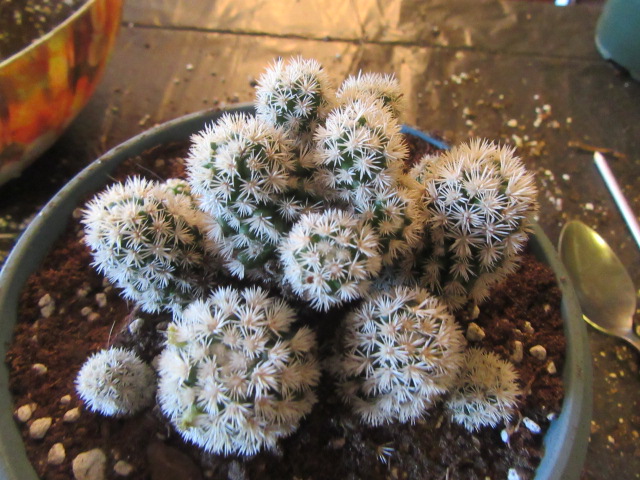 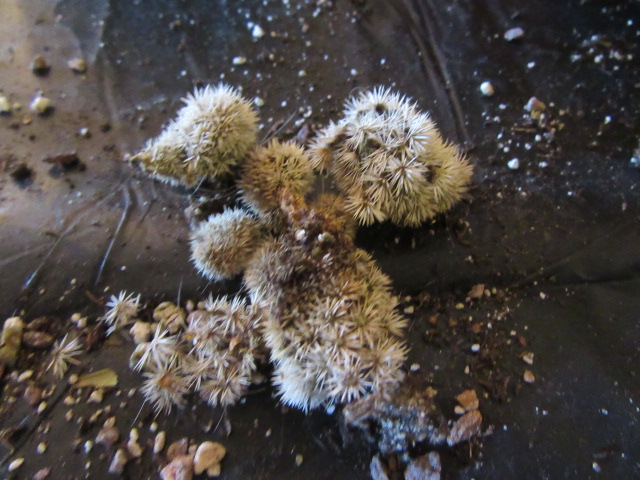 This is part of the dead plants. I had discarded a few earlier in the summer. 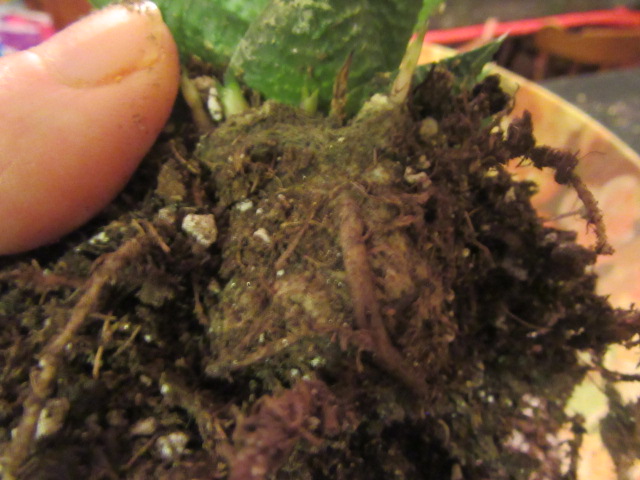 Then I checked the Haworthiopsis limifolia (Fairy Washboard, ETC.) to check to see if it had been in a plug like the Haworthia ‘Little Warty’. Sure enough there it was… While a few roots did poke through, you can see how many roots were tightly packed inside the plug wrapping. Most of this plants roots had grown out the bottom and up the side. 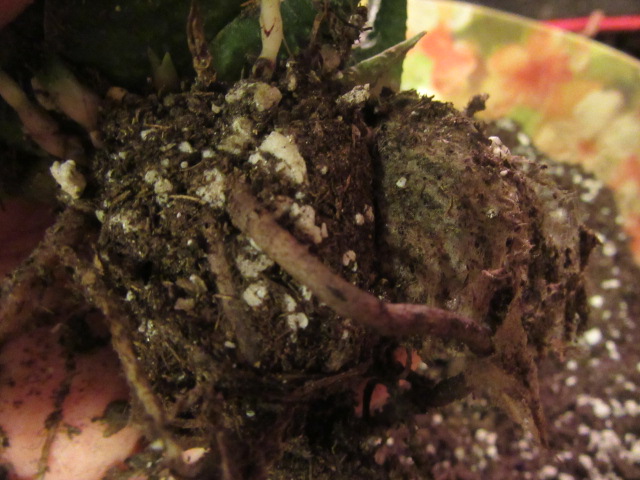 I gently peeled away the netting and from around the roots that grown through it. That’s when I remembered the x Alworthia ‘Black Gem’ could also have this same issue since all three plants came from Wildwood… I have to quiz Mr. Yoder abut removing the netting from the plug when they repot. 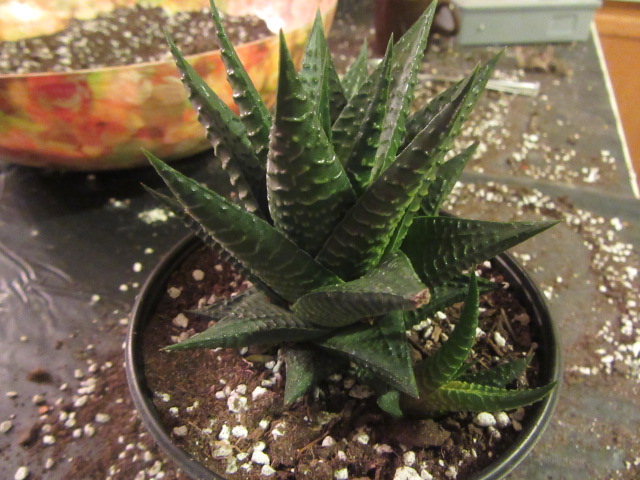 Now, it is happy… 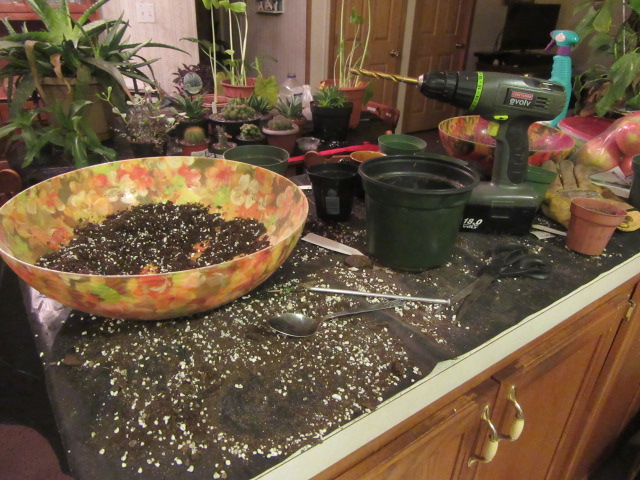 Hmmm… The island in the kitchen made a great potting table but now I have to clean up the mess… You may be wondering what the drill is for? If I use pots from Dollar General, like with the x Alworthia ‘Black Gem’, I have to drill holes in the bottom.

I think that’s it for repotting for a while until I check the x Alworthia ‘Black Gem’ for the plug. I hope all is well with you. Until next time, take care, be safe, and stay warm or cool depending on where you live.