Hello everyone! I hope this finds you well and that you are having a great week ahead. Last week the hay was cut and baled here on the farm so now I can resume taking wildflower photos here. 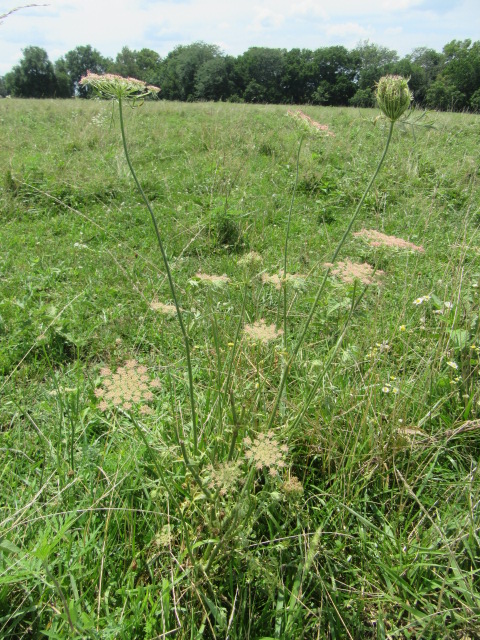 There are A LOT of Daucus carota or Queen Anne’s Lace growing everywhere now, but there is something definitely strange about this particular plant…

I have been trying to get a photo of a certain plant here on the farm since 2013. I always see the leaves in the swampy area but never any flowers. This year, I FINALLY did it!

I went to the back of the farm to remove the electric fence in the middle of the back pasture so it would be easier to cut the hay. LOW AND BEHOLD there was one of these plants right next to the electric fence about 12-14′ away from the HUGE OLD Multiflora Rose. It was very tall and getting ready to flower. I removed the fence and put the five electric fence posts around this plant. I put the yellow insulators on top of the posts to sort of act as flags. I told BJ about the plant and where it was and I had put the posts around it so he couldn’t miss it. I told him I wanted a photo of it so not to mow over it. I didn’t have the camera with me at the time or I would have taken photos right then. The next day I went back with the camera to take photos. Well, my thoughts about him not being able to miss it were true… He didn’t miss it! He ran smack over the plant and the five steel posts! Always in the past, there were several of these plants growing down by the swamp so I went to have a look. Sure enough, they were also getting ready to flower so I got my photos after all and made a positive ID. I didn’t complain to BJ about mowing the HUGE specimen because it was already done. He was there to mow and bale the hay and undoubtedly was looking forward and behind and didn’t even think about the plant. I am sure he remembered when he hit the posts, though.

Lower leaves of the Agrimonia parviflora (Swamp Agrimony) on 7-25-19.

There are a few species of Agrimonia in Missouri, but the leaves easily distinguish Agrimonia parviflora from the others. The common name is Swamp Agrimony, Small-Flowered Agrimony, Harvestlice Agrimony, and Harvestlice. Plants of the World Online lists 21 accepted species in the genus but the Wikipedia says about 15. There are seven or so species in the US with three being described on the Missouriplants.com website. This species is found in 32 states in the United States. Out of all the species, Agrimonia parviflora is considered to be the most noxious.

Although bees and other insects feed on the nectar of the flowers, most mammals avoid this plant due to its bitter taste. Certain birds use Agrimony in their nests to keep away parasites such as lice and mites because of its foul aroma and taste. Flowers give way to bur-like seed capsules that cling to the fur of animals.

Even though considered a noxious plant, its burs were used by Native Americans for diarrhea and to reduce fever. The roots can be pulverized and have been used to increase red blood cell count, a gastrointestinal aid, a topical treatment for skin issues, and as a dietary aid.

Now then… After I took photos of the Agrimony, I walked to the corner to the tree line that borders the south hayfield. It’s a little hard to explain, but trust me, I know where I am going. 🙂 Here again, are plants I had not seen flower because they didn’t have the opportunity before.

Hmmm… I better move to the next plant. This one has a hungry stalker and I wouldn’t want this Wheel Bug to invite me to dinner or think I was interested in his.

In the corner of this area were three of these plants and there are a few more farther north. I was unsure what these plants were so I took lots of photos to help ID. Doing research on several websites, I thought at first they could be a Sonchus species usually referred to as Sow Thistles. There are three Sonchus species mentioned by Missouriplants.com, Wildflowerresearch.org, and Midwest Weeds and Plants but the lower leaves and top of the plant do not match. It is definitely not Sonchus asper because this plant is friendly and S. asper is definitely not. Ummm… I also found one of those in another area. The tallest plant in the corner appears to be well over 8′ tall. Maybe I should take a tape measure and check for sure. It would also be a good idea to measure the leaves. That might sound a little overboard but you will see why in a minute. 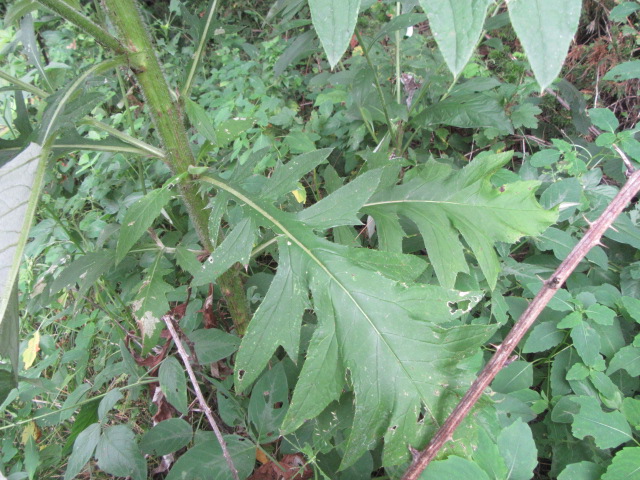 Lower leaves of the Cirsium altissimum (Tall Thistle) on 7-25-19.

These plants could be Sonchus oleraceus, the Common Sowthistle but the lower leaves absolutely do not match. Sonchus oleraceus is not a spiny plant either. After looking at many photos on several websites, I came to the conclusion these plants are Cirsium altissimum, comonly known as the Tall Thistle.

Central leaves of the Cirsium altissimim (Tall Thistle) on 7-25-19.

The leaves change shape and become very long, broad, and lance-shaped with toothed margins. Again, they are not spiny. Very similar to Sonchus oleraceus. 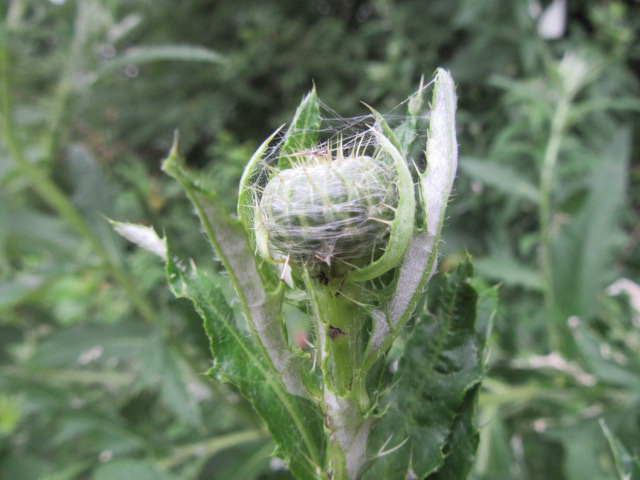 The buds are globe-shaped. A small spider had made a home on this bud.

You have to admit this is a neat bud… All the photos of buds I have looked at are farther along than these. So, Sonchus bud search was unfruitful. After determining it was probably a Cirsium species, I saw buds that were similar which helped to ID this plant. 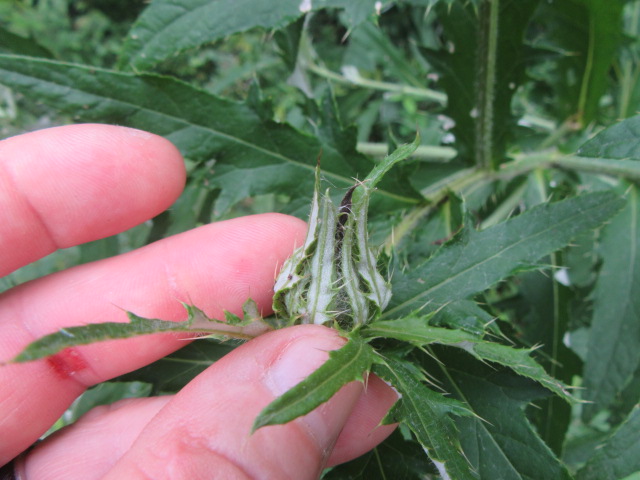 Cirsium altissimum (Tall Thistle) is somewhat variable in the way they grow and what they look like from one location to another. I think light plays a big factor. The plant growing in full sun is shorter, has no lobed lower leaves, and the inflorence is more open. The plant  in this photo is growing in a mostly shaded area. 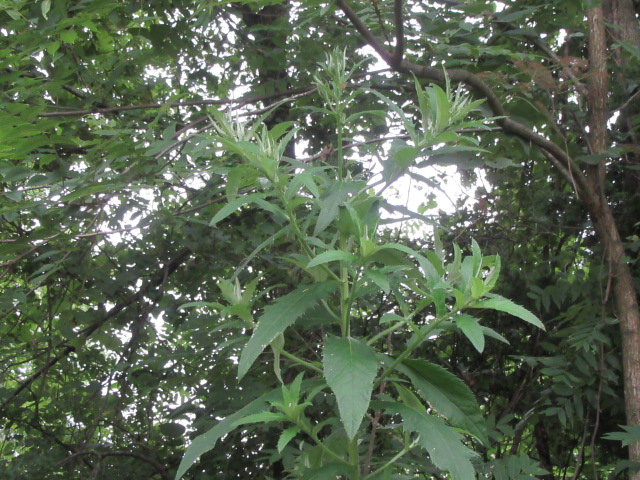 As with the Tall Thistle, Sowthistle flowers are normally well above the leaves. The lower leaves and flower buds were the determining factor before the buds open. After that, the Cirsium flowers will be a pinkinsh color while Sonchus species have yellow flowers. Probably, if I had ever seen a Sonchus species in the first place, I wouldn’t have been confused initially. I am sure they are much different in several other ways as well. Hopefully someday I will meet a Sonchus.

UPDATE: THE “could be” Sonchus oleraceus is Cirisium altissimum, a Tall Thistle.

Well, that’s all for this post. Until next time, be safe, stay positive, and always be thankful.