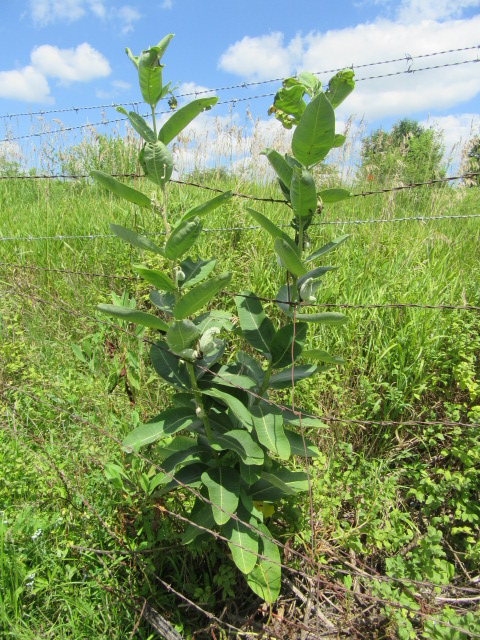 Hello everyone! I hope this post finds you well and doing your best to enjoy the summer. We have had some hot days but it cools down nicely in the evening. I hadn’t been out to the farm where I have been working on the thistles for 12 days until Thursday. Friday I made my way to an area where I had been watching a colony of plants. I had been waiting for them to flower so I could make an ID but they flowered while I was away.

While I was in the area I noticed an Asclepias syriaca (Common Milkweed). I have these growing along the lagoon at my house but I hadn’t taken any photos for some strange reason. This species of Milkweed grow pretty tall, up to around 6′, and have nice broad oval leaves. There is another species that is similar in Missouri but they may have gone extinct since none have been seen since 1933.

Asclepias syriaca is known as the Common Milkweed, Butterfly Flower, Silkweed, Silky Swallowwort, and Virginia Silkweed. This species was one of the earliest North American species described by Jacques-Philippe Cornut (French physical and botanist) in Canadensium Plantarum Historia in 1635. Many species of insects feed on the Common Milkweed.

Although the plant’s latex contains large quantities of glycosides which makes it toxic to livestock and humans, the young shoots, leaves, flower buds, and immature fruit are edible (raw). Apparently, it can be cooked like asparagus. I read this information on Wikipedia.

According to Plants of the World Online, there are 206 species in the Asclepias genus. It is a member of the Apocynaceae Family (family of Milkweeds) which currently contains 358 genera. Version 1.1 of The Plant List (updated in 2013) listed 410 genera and 5,745 species. It also lists a WHOPPING 10,568 synonyms (genus and species synonymous with other species) PLUS 3,928 species names that were still unresolved… Well, that was several years ago and those numbers have changed due to the effort of many botanists and horticulturalists. So many species had/have multiple scientific names. It is a continual work in progress. 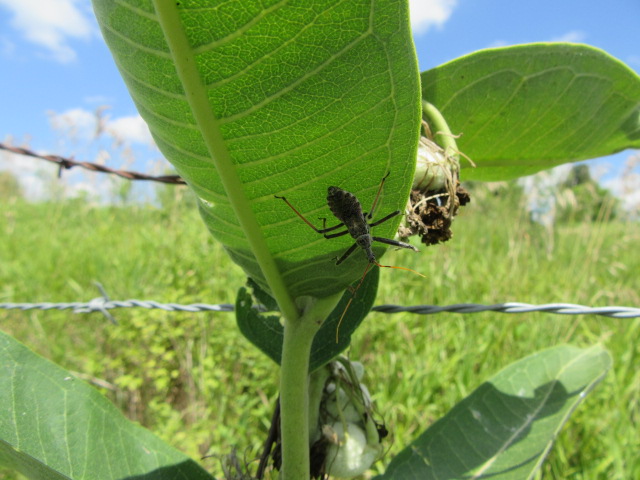 While looking at the Milkweed I noticed this assassin bug. It is the dreaded Wheel Bug (Arilus cristatus). The Wheel Bug is one of the largest assassin bugs. I have seen these many times on the farm but didn’t know much about them. I found some good information on the North Carolina State Extension website. They feed on a number of insects including aphids, caterpillars, beetles, and many other problem insects. They inject their prey with a toxin that kills within 30 seconds. Their bite is said to be more painful than a wasp sting so it is best not to handle.

Debbie Roos has a great article titled Birth Of An Assassin Bug! on the North Carolina State University Extension website. The article also shows photos of their eggs. 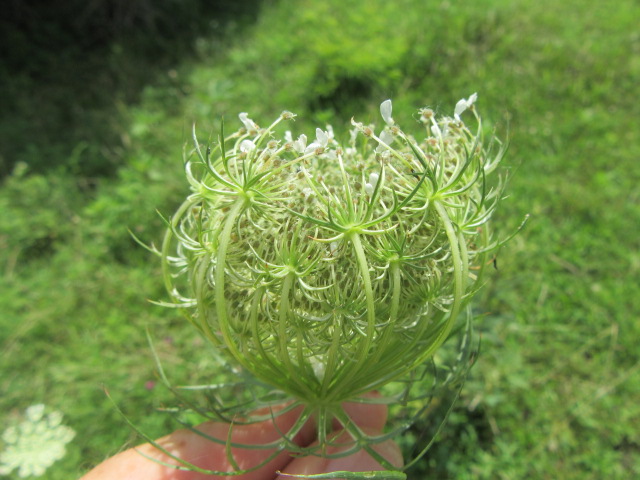 Earlier there was A LOT of Achillea millefolium (Yarrow) on the farm, and there still is for that matter. I mean, where would they go anyway? Now the Queen Anne’s Lace (Daucus carota) is flowering. Daucus carota is a member of the Apiaceae Family with carrots and 441 other genera. There are 45 accepted species in the Daucus genus.

While the Queen Anne’s Lace flowers are kind of similar in appearance to the deadly Poison Hemlock, their leaves have a mixture of tripinnate leaves, fine hairs, and a root that smells like carrots. Poison Hemlock have larger leaves and the plants grow MUCH taller. I ran across this YouTube video, Poison Hemlock Identification and Yarrow Comparision, that shows the difference between Poison Hemlock, Queen Anne’s Lace and Achillea millefolium.  While their flowers may look similar to people who don’t spend a lot of time in nature, the leaves of Achillea millefolium look nothing like the other two.

Since summer is here, it seems like the interest in “foraging” has returned. If you are interested in this, you really should invest in a field guide to take along with you, or even someone who is experienced. Ummm… Also when you do this, I suggest leaving your cell phones behind or at least turn them off. When you are out in nature, be out in nature and leave any distractions behind. Take time to be aware of the beauty and life around you. Sit quietly someplace with your eyes closed and allow your other senses to observe as well. Sometimes we see best with our eyes closed in nature. Be aware that we are all one with EVERY living thing. 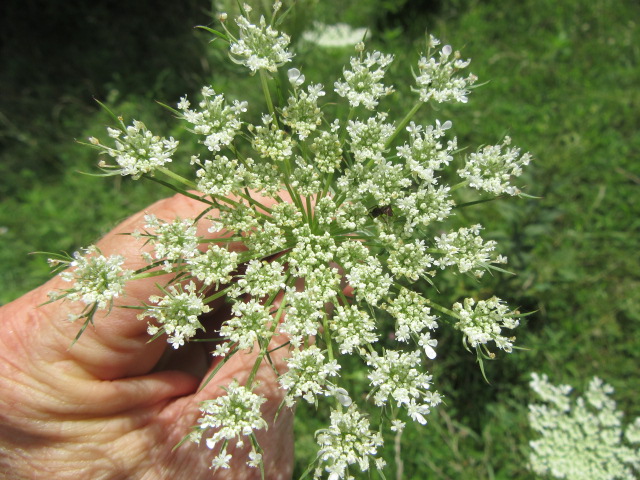 Flowers are used in arrangements and will change color depending on the color of the water, similar to Carnations.

Plants are beneficial companion plants attracting pollinators and improving the microclimate for some vegetables. Some states have it listed as a noxious weed and considered invasive in pastures when established.

Now for the plants I was keeping an eye on… 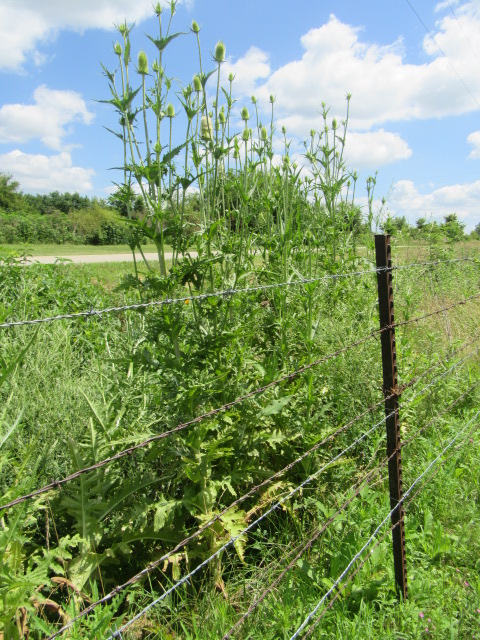 I took an interest in these plants growing along the highway because I don’t have any like this at my place. I have seen them here and there, normally where there is a ditch or a creek.  It may sound strange but I had no clue what they were even after seeing their flowers but the name Teasel popped into my head on the way home. Well, I guess I must admit, the name didn’t just pop into my head. We are not alone and when we talk to ourselves we are actually talking to “them” as well. GEEZ! It is kind of hard to explain unless you have done the same…

OK, even though you might think I am a bit whacky, I will explain. Once you realize you are not alone and we have guides and Angels and so on with us all the time, when you talk to yourself you are also talking with them. They are here not only to guide us and watch over us, but they are also here to learn from us and our human experiences. They are very OLD and knowledgeable about many things. So, when you have questions about this and that, just ask. You will be surprised at how you receive your answers.

Anyway, this plant is, in fact, the Cut-Leaved Teasel (Dipsacus laciniatus). For some reason, it is a member of the Caprifoliaceae Family, also known as the Honeysuckle Family, which consists of mainly shrubs and vines. It was formerly in the Dipsacaceae Family (the Teasel Family). Plants of the World Online list 21 accepted species in the Dipsacus genus. There are a few other Teasel species found in Missouri but their flowers are a different color and their leaves are also different. 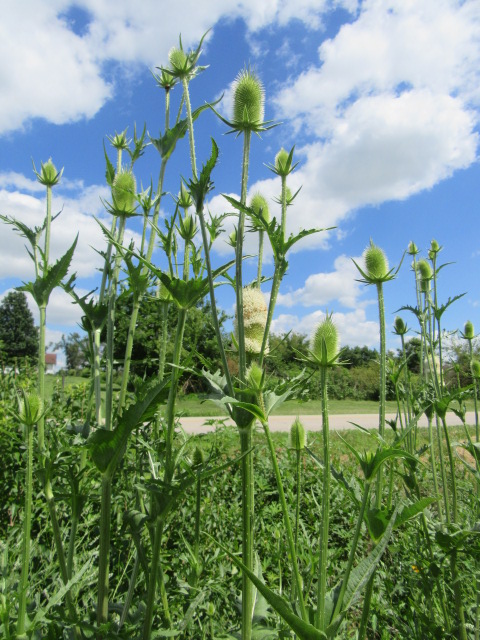 I think they have already flowered but they are still very interesting. 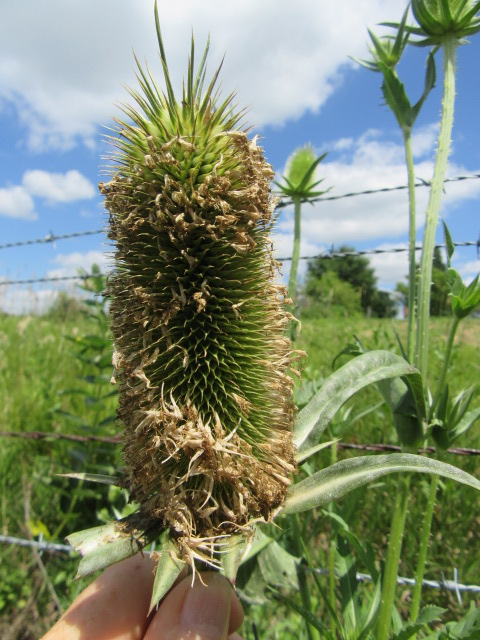 They are monocarpic, living for several years before flowering then dying. The flowers attract bumblebees, bee flies, butterflies, and skippers. 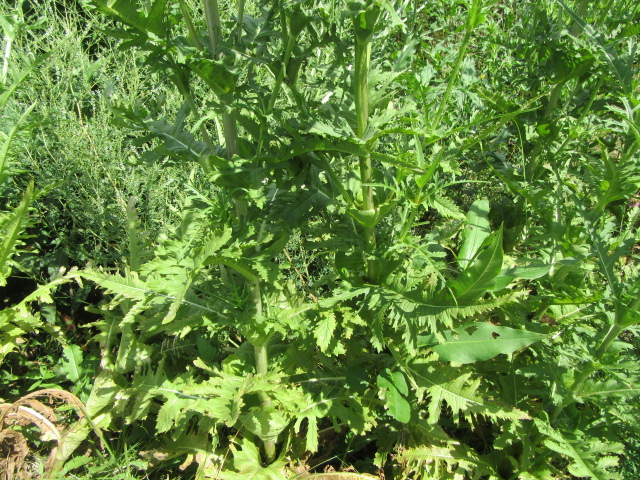 Its leaves are oppositely arranged around the stem. The pinnately lobed leaves are around 16” long. The base of the leaves clasps around the prickly stems. 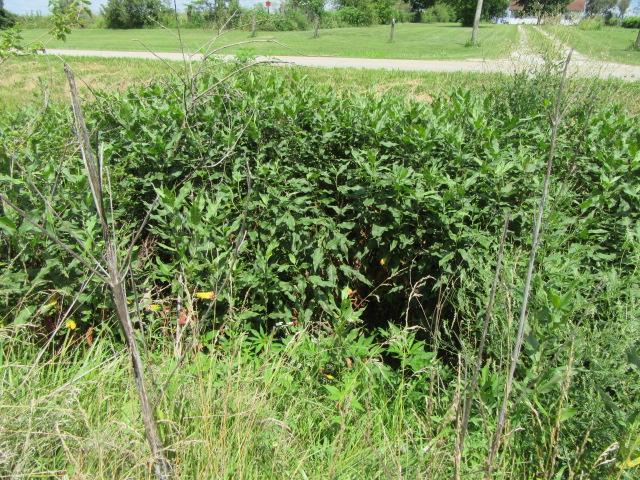 There is quite a colony in the ditch that apparently aren’t old enough to flower. The leaves of immature plants are usually unlobed.

For more information about this plant, visit the Missouriplants.com, Its Wikipedia page, or just type in Dipsacus laciniatus. There are several state websites with good information.

Well, that’s it for this post. Until next time, take care, stay positive, be safe and always be thankful!