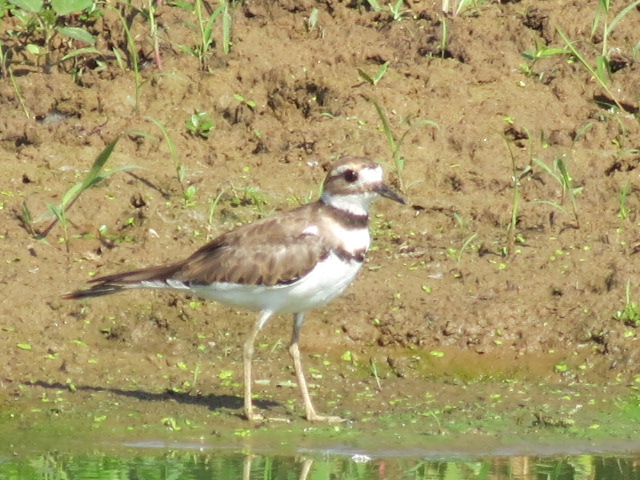 Hello everyone! I hope this post is finding you all well. Many birds come and go with the changing seasons. Some are quite comical to watch like the Greater Yellowlegs that like the pond. Summer brings birds that have migrated south for the winter then they return back here to nest. One of those birds is the Killdeer.

The Killdeer (Charadrius vociferus) are plovers that seem to prefer open areas with short grass like pastures. Plovers are commonly shorebirds, and while the Killdeer do run around the pond at times, they still prefer the pasture.

I don’t really remember much about birds when I was a kid, but I vividly remember the Killdeer. Back then there were many more, maybe 20 or so, running around in the pasture. Perhaps when they arrive in the spring there are more because they are choosing mates and dividing up territory.

When you go out into the pasture, the Killdeer are running here and there like they have no clue where they are going. They make this shrill noise that almost hurts your ears.

Earlier in the summer, there were maybe 10 or so. Last time I paid attention, I could only spot two pair. The resident Red-Tailed Hawk may be one reason their numbers have dwindled.

As I was mowing the weeds down in the pasture on July 9, I was trying to watch out for possible Killdeer nests. They nest right on the ground and I always wondered what kept the cows from stepping on their eggs. As I was mowing in the lower part of the front pasture, I turned the corner and just happened to look at the ground on the left side of the tractor. Low and behold, there was a Killdeer doing her crazy dance maybe 3-4 feet from the tractor. I stopped the tractor and kind of yelled, “WHERE?” Yeah, I know, that sounds like the heat was getting to me talking to a crazy bird. But, she must have understood because she stood up and moved over and showed me her nest. So, I got off the tractor and marked the spot so I wouldn’t run over her eggs. It was definitely one of those times I wish I had my camera. How many times have I said that? It would have been a perfect shot! One thing I noticed was where she had laid her eggs… They are pointed side down right smack in the center of an old cow pile. For those of you who know anything about cows, you know they don’t eat the crass around where they… you know… poop. During the heat of the day, the eggs don’t need to be intubated because of the sun. Since they are on a cow pile, it probably absorbs heat.

Over the next week or so I went down to check on the eggs. They were still there but I never saw the mother sitting on the eggs. Then one day last week, they were gone. No trace of any shell like the chicks had hatched or anything.

Then Friday (July 20), when I came from the back pasture and was getting close to the barn, the Killdeer flew in front of me and started doing her “OH, I’m hurt” dance about 20 feet from the barn. This time I had my camera. 🙂 Hmmm… The only reason they do that is to lead you from their nest or their babies…

She squatted down where I could barely see her then she would stick her head up to see if I was coming. This went on until I got a little closer… 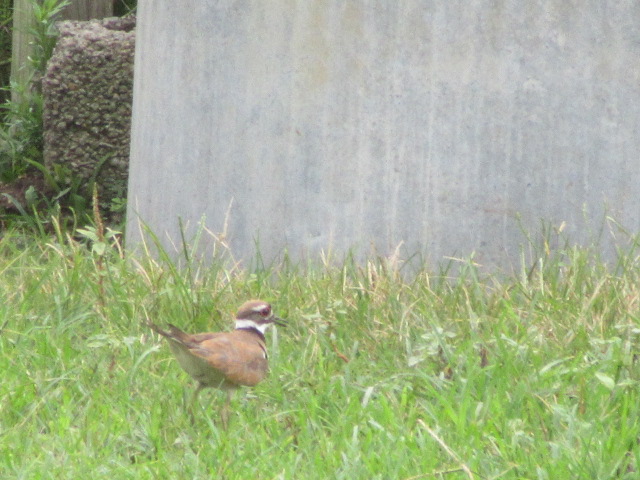 Then she got up and ran to another spot and repeated her ordeal.

They do this out in the pasture, too. (I hate to tell you, but I have spent some time following a Killdeer around in the pasture in the past trying to spot nests or their young until I would give up. Then they would fly over me laughing.) Anyway, after she thought she was far enough away and I wasn’t watching her, she stopped her act. I started looking in the taller grass close to where she had been while she was watching and shrieking from farther away. Like she was telling her kids to stay hidden. After a few minutes, I wondered if they would come out if I walked away like I gave up.

Well, it worked! After I walked away from the barn about 40 feet or so, I turned around and spotted two chicks. Just for fun, I went back up to where I saw them and they were completely hidden once again. They just completely vanished like they became invisible.

Earlier, on my way back from the back pasture with the cows, I spotted another bird I had never seen before.

I looked on the Missouri Department of Conservation website’s field guide and I think this bird is called the Eastern Kingbird (Tyrannus tryannus). they are good sized flycatchers measuring approximately 8 1/2″ from the tip of their bill to the end of their tail. According to the website, they arrive in Missouri around mid-April and stay until mid-August through September. They migrate to and from South America in large flocks. They primarily feed on wasps, beetles, grasshoppers, etc. I think I need about a million to eat the Japanese Beetles.

Well, that’s it for this post. I saw something weird yesterday while I was mowing but I am saving it for the next post… So, until then stay well, be safe, and stay positive. GET DIRTY!

29 comments on “The Killdeer-Craziest Bird On The Farm”