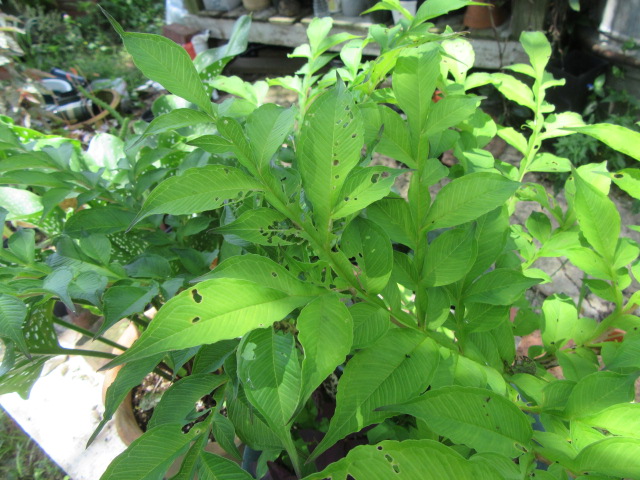 Hello folks! I hope this post finds you all well. The Japanese Beetles (Popillia japonica) have been back for a while now, but they are getting ridiculous. Every year they come and feed mainly on the leaves of the Chinese Elms. They also eat the flowers on the roses. My plant tables next to and behind one of the sheds is under a Chinese Elm. It normally provides the perfect light for the potted plants, cactus, and succulents. The shade beds are also under a maple and two Chinese Elms. In that area, the light changes from shade to light shade.

Well, that is just nature. Until last year, there was really no problem. Then last year, the Japanese Beetle population turned into an invasion. I hoped that the colder than usual January would have helped control them and there wouldn’t be as many. But, that wasn’t the result. This year, they are worse than ever. Now, the Japanese Beetle lay eggs in the ground and then turn into their larvae stage. Then in June (maybe starting in late May), they become adults. Their main goal is to feed and mate.

They had really done no damage to the potted plants, mainly feeding on the leaves of the Chinese Elm. Then, on July 2 I noticed them on the Amorphophallus and a few on the Calla. So, I moved those two plants to the side porch.

They attacked the Begonia ‘Frosty’ and even the Oxalis triangularis subsp. papilionaceae and Oxalis tetraphylla (Iron Cross).

They are easy to get off. Just shake the plant they fly off.

The bowl I mix potting soil in had water in it and A LOT od drowned Japanese Beetles.

They attacked the Begonia ‘Brazilian Lady’… 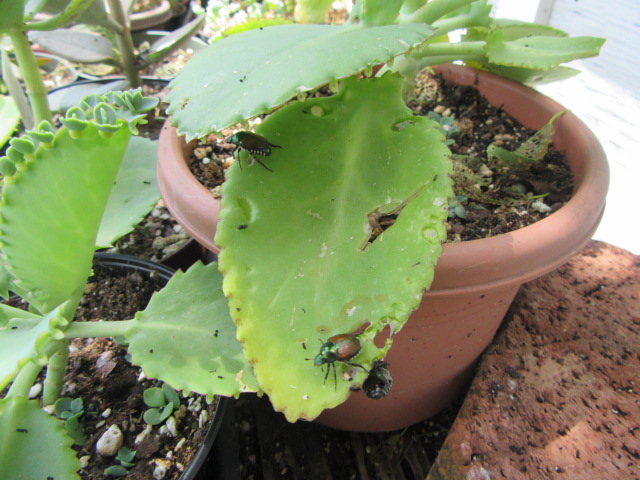 And even the Bryophyllum daigremontiana (Mother of Thousands).

I went over to the Chinese Elm growing on the old back porch to get a photo, but they took off by the thousands!

They didn’t chew much on the Tradescantia sillamontana, but their leaves were covered in poop and debris from the elm tree.

I had to take all the plants off the longer table behind the shed and drag it (upsidedown) to the front porch. Then I took several wheelbarrow loads of plants…

The light here is not the best for some of the plants, either too much or not enough for some, but it will have to do for now. The beetles didn’t chew on all the plants I moved, but you never know. Not only that, they leave a big mess behind on the leaves from the elm tree. Fallen leaves and lots of poop. I watered the shade bed and the leaves of the Alocasia and Hosta were covered with poop and debris from the elm trees. So far they haven’t been feeding on them.

They had just chewed on a few leaves of the Calla, but I moved it to the side porch, too.

As far as the shade beds are concerned… It won’t be so shady now. Most of the plants will be OK except for maybe the Brunnera ‘Jack Frost’. Unless the beetles turn to the Hosta, Alocasia, and Heuchera.

I can see why the moles are so active in the yard in front of the chicken house and the shade beds. They are after the larvae… Spraying plants with neem oil doesn’t help fight against Japanese Beetles. About the only thing is to use milky spore which was developed by the USDA and applying it to the soil to kill their grubs.

You can read more about this crazy critter on the Wikipedia page by clicking HERE. Ther are thought to have come to the US on shipments of Iris bulbs from Japan before 1912… They have natural predators in Japan which keep them in control, but here and other countries they are now in, they have none… They feed on many plants besides the Chinese Elm, including many vegetables and other food crops and ornamentals.

Well, that’s it for this post. I hope you are all well and staying cool during the heat of the summer. Take care, stay well and be positive! Of course, GET DIRTY when you have the chance!