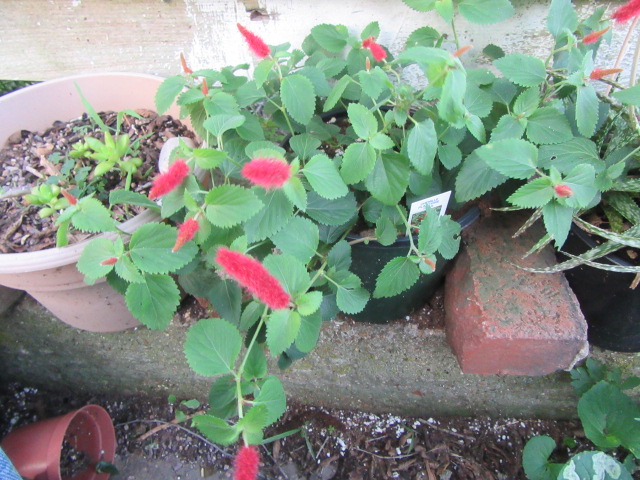 Hello folks! I hope this finds everyone well. I don’t know about where you live, be it has been pretty hot here lately. It hasn’t been so bad the last couple of days and we were cooled down by a nice rain today.

I haven’t made a post since June 12, so I thought I better make one so you can see how the beds are doing and the plants are growing. Even though I haven’t made any posts I have taken well over 100 photos. I have been kind of busy outside and working on pages for the new plants. Then I get tired and wind up leaning back in my chair and falling asleep. It is amazing how well the office chair doubles as a recliner when I put my feet up on the desk.

Some of the plants have grown so fast the 89 photos I took last week are already out of date. BUT, don’t worry because I took 22 more today. I am going to leave out the Hosta and make a separate post for them.

Last year I put the Acalypha pendula (Chenille Plant) in the new shade bed. This year I decided to put in a larger pot that way I can bring it inside for the winter much easier. They are very easy to grow and make very good plants for hanging pots. 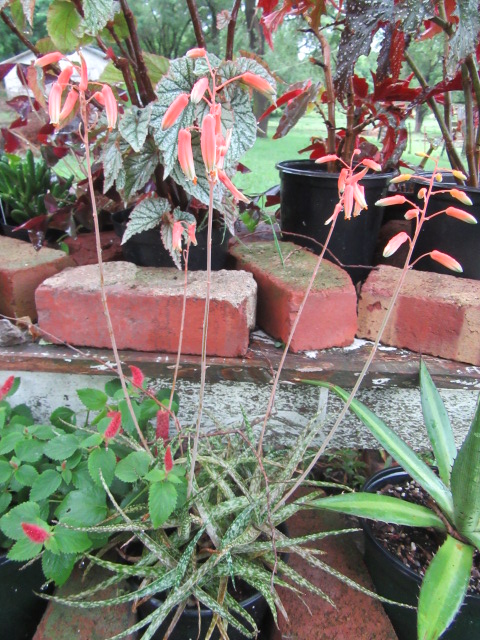 The Aloe x ‘Lizard Lips’ is blooming up a storm right now. It has five flower stems and the tallest is 20″. It will continue flowering all summer and even some in the winter. 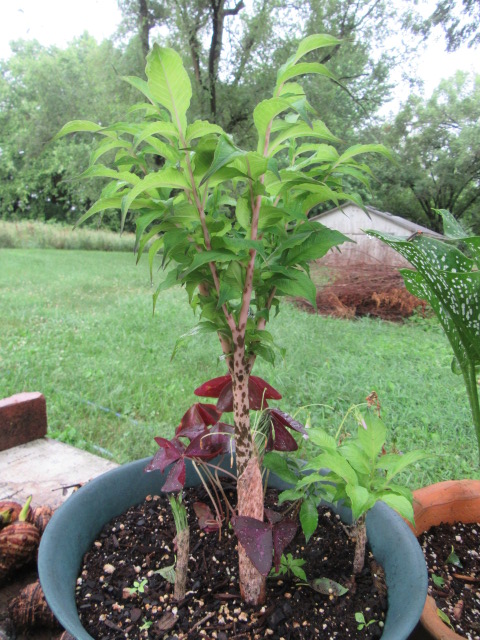 Well, I was hoping for flowers but maybe these Amorphophallus are too young still. I am not sure how old or large the bulbs have to be before they produce flowers. There were two plants in the pot when I brought it home last year, now there are SIX! One of them is just beginning to peek through the soil and the tallest is now 16″. The part in the middle that looks like a stem is actually the petiole and what looks like multiple branches on top is all one leaf. 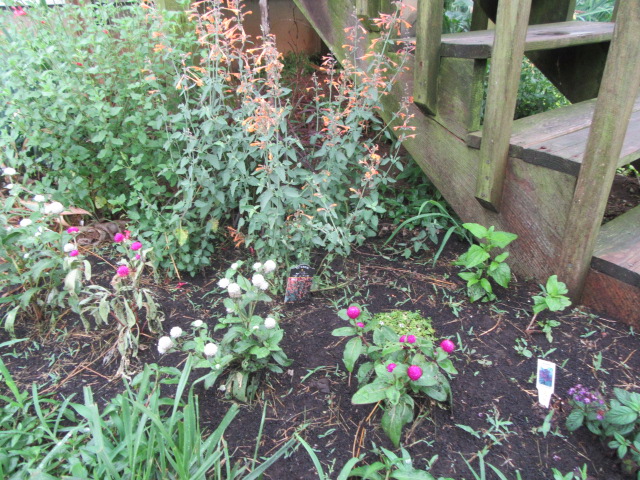 The northeast corner bed underwent quite a change since the Conoclinum coelestinum (Hardy Ageratum, Floss Flower or whatever you want to call them) didn’t come up. They have been on both sides of the steps for MANY YEARS. Finally, I noticed a couple as I was digging out the old dirt and adding “the good stuff”. This bed has the Salvia microphylla ‘Hot Lips’, three Agastache aurantiaca ‘Apricot Sprite’, Heliotrope ‘Marine’ (far right), Gomphrena globosa ‘Gnome White’ and ‘Purple’ (two of each), Isotoma fluviatilis (Blue Star Creeper), and the two Hardy Ageratum. The Cenchrus setaceus (Purple Fountain Grass) is behind the Agastache where it wasn’t intended to be. It was supposed to go where the Heliotrope wound up and the Crocosmia x Curtonus ’Lucifer’ was supposed to go where the Purple Fountain Grass is. I thought the Heliotrope wasn’t going to make it because a mole kept digging it up. This week the mole left it alone and it perked up… 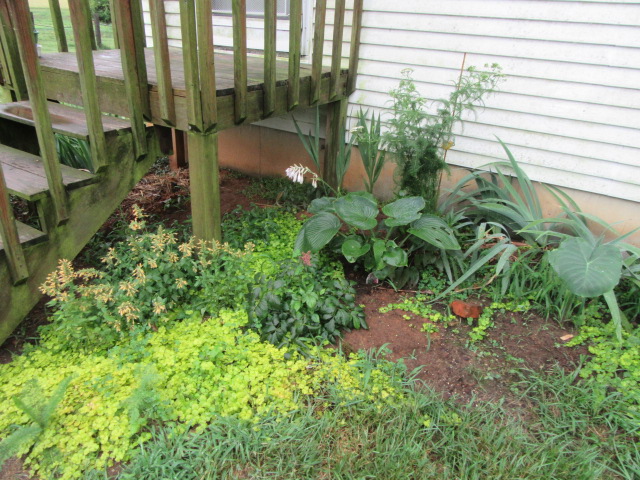 I know this looks like a mess, but what can I say. It’s a work in progress I think. The Crocosmia x Curtonus ’Lucifer’ wound up in the corner behind Hosta ‘Empress Wu’. I moved the biggest clump of Achillea millefolium in front of the barn but didn’t move the other clump by the wall. I had to move the Hosta farther away from the corner because it will get MUCH bigger in time. The “Elephant Ear” in the right side of the photo is the Leucocasia gigantea ‘Thailand Giant, which used to be Colocasia gigantea ‘Thailand Giant’ before the name changed. I put the new Astilbe x arendensii Fanal’ kind of in front of the Hosta and to the left a little. The three Agastache ‘Kudos Gold’ are next to the porch and doing AWESOME. I am going to put the Monarda didyma Super Buzz™ ’Cherry Pops’ (GEEZ) next to the steps instead of next to the back porch. I put the two largest Colocasia esculenta bulbs (tubers) farther up in this bed, too. The other Astilbe and Geranium sanguineum (Bloody Cranesbill) are also there.

I almost forgot to mention the Lysimachia nummularia ‘Goldilocks’ (Creeping Jenny) that is really enjoying itself. 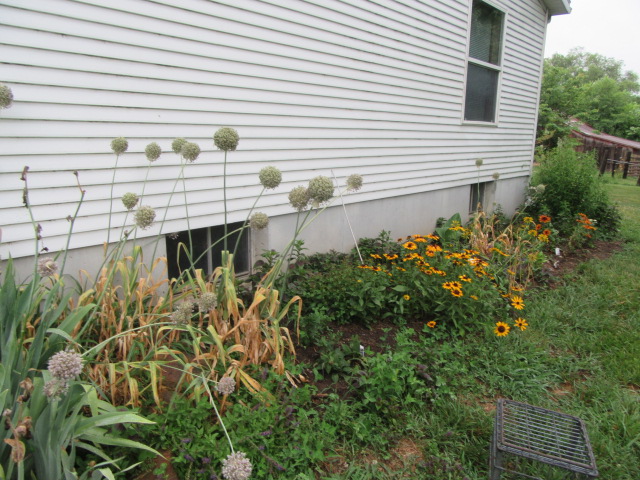 The south bed from the left… A continual work in progress but almost there. I had a few big surprises in this bed. The Marigold ‘Brocade’ and Talinum paniculatum Jewels of Opar) didn’t come up very well from seed probably because of the winter. Actually, it was a good thing so I am definitely not going to complain. The Celosia spicata ‘Cramer’s Amazon’ made up for them and as usual, there are MANY more than I can use. I have already transplanted all I need along the wall and there are hundreds left over. I hate to pull them up and throw them away, but if I transplant them somewhere else just think of how many there will be next spring. Maybe I can move some here and there on the farm along the fence rows. Umm… Then, next thing you know, the Missouri Conservation Department can add them to their list of wildflowers. 🙂 Wonder what would happen if I scatter some seed along the highway? I am not going to say they are invasive. The other surprise was all the Rudbeckia hirta ‘Denver Daisy’ that came up from seed. Luckily they came up in a group so I decided to just leave them where they were.

The Elephant Garlic always does very well in the south bed. I measured the flower clusters and they are 5″ across. 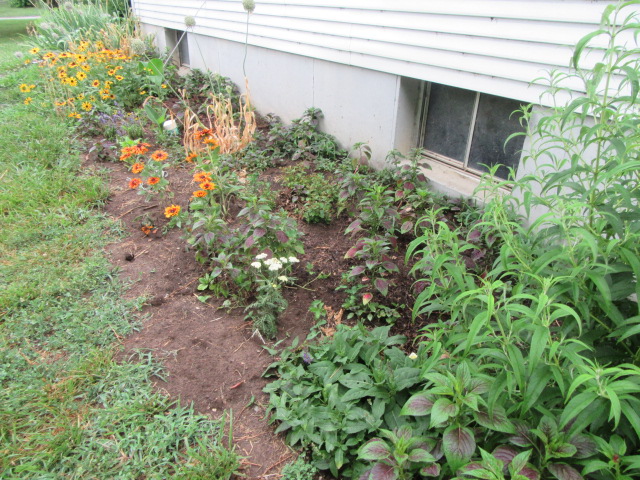 The south bed from the right side… The Salvia x sylvestris ‘Mainacht’ is soooo much happier after I moved the clump of Elephant Garlic from behind it. After all these years of not spreading, it is now 3 times the size it was before.

Plants in the south bed, from downspout to downspout, include in alphabetical order: Achillea ‘Moondust’, Allium ampeloprasum var. ampeloprasum (Elephant Garlic), Buddleja ‘White Profusion’, Celosia spicata ‘Cramer’s Amazon, Rudbeckia hirta, Rudbeckia hirta ‘Cherokee Sunset’, Salvia farinacea Cathedral™ ‘Blue Bicolor’, Salvia nemorosa ‘New Dimensions Blue’, Salvia pratensis Fashionista™ ‘Midnight Model’, Salvia x sylvestris ‘Mainacht’ (‘May Night’), Stachys byzantina (Lamb’s Ears), Tagetes patula (Marigold) ‘Brocade’, and Talinum paniculatum (Jewels of Opar). I still have to transplant a few ‘Brocade’ Marigold and Jewels of Opar into this bed, but not near as many as I did last year. Even though they did not come up well here from self-sowing, they came up in the other beds. 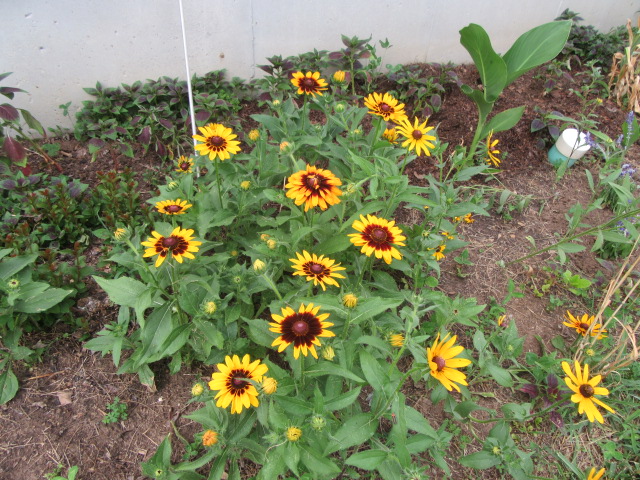 The Rudbeckia hirta ‘Denver Daisy’ are doing really well and blooming like crazy. The above photo was taken on June 14 while the photo of the bed was taken on the 20th. So, you can see there are many more flowers now. Some of the flowers measure 4 1/2″ across.

Ignore the Canna. Pretend it is invisible… 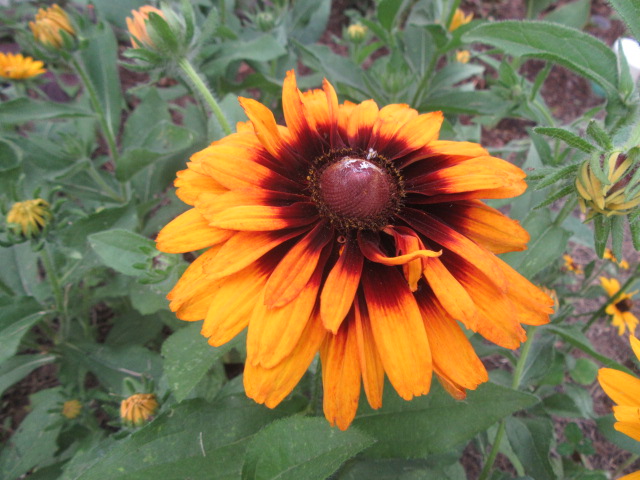 Out of all the flowers in the ‘Denver Daisy’ colony, there are two plants that are producing doubles… The above photo was taken in the afternoon while the one before it was taken in the morning. That may be one reason why it looks like it is a different shade. The other reason is that it kind of is a little darker. 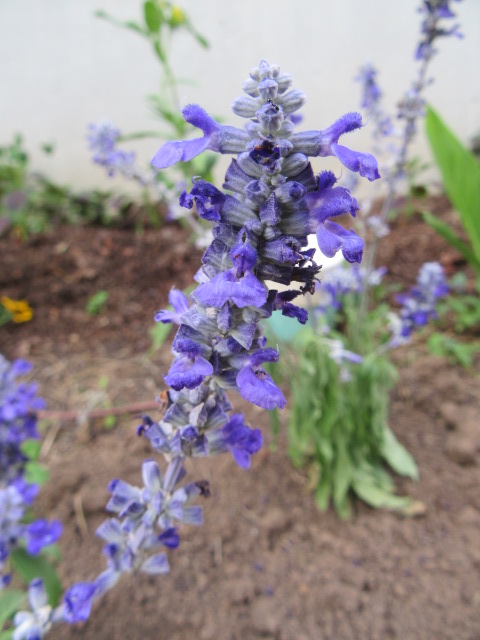 There are several different colors in the Cathedral™ Series of Salvia farinacea but I think these are ‘Blue Bicolor’. The tag with them just says ‘Cathedral™ Series’. I have to keep an eye on these three plants because I think they require a little more moisture. Unfortunately, these may not return next spring because we are not in their “zone”. Lowe’s shouldn’t sell perennials that are not perennial in their local store’s zone. They probably didn’t realize it or maybe they wouldn’t have. I grew Salvia farinacea ‘Blue Bedder’ from seed in Mississippi. 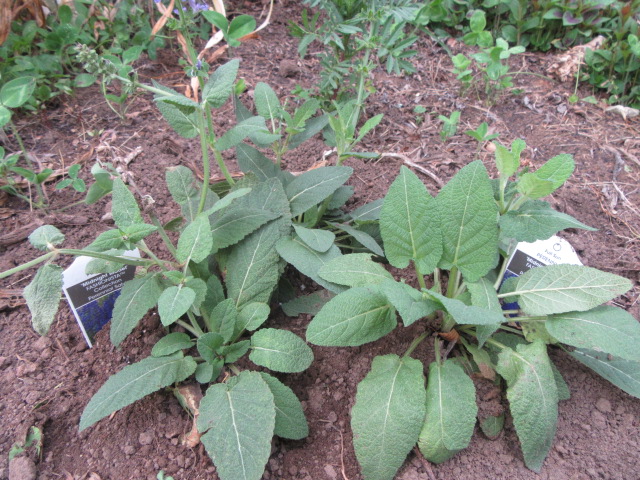 The Salvia pratensis Fashionista™ ‘Midnight Model’ are nice plants and 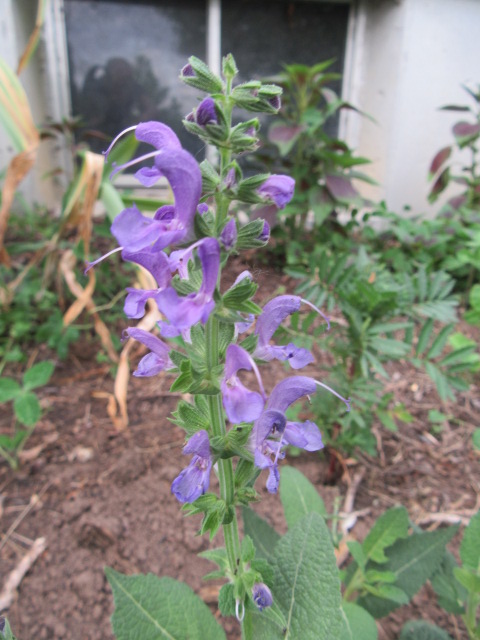 They have really neat flowers. Their top lip looks like a hook! I have to make sure I keep up with deadheading or these plants may stop flowering. 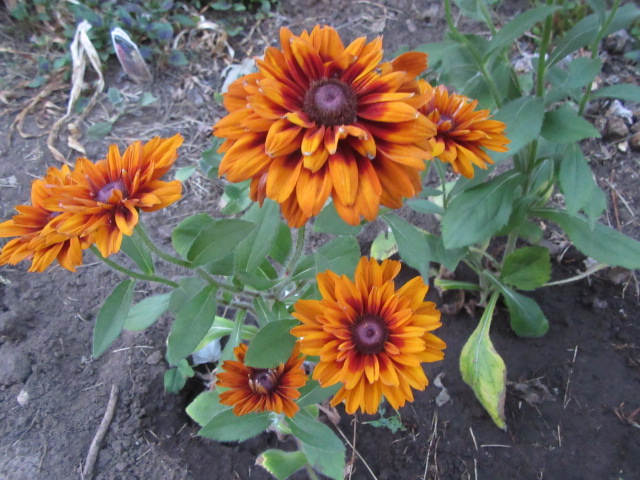 The above photo of the Rudbeckia hirta ‘Cherokee Sunset’ was taken on June 15. They are looking even better now and some of the flowers are 5″ across! 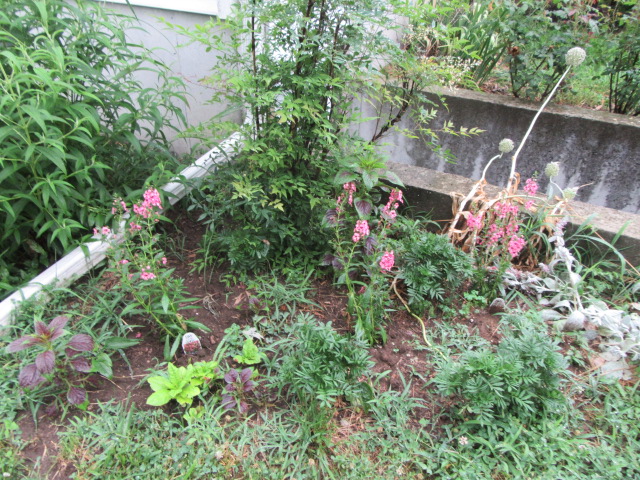 On the other side of the downspout is the southeast corner bed. The Jewels of Opar were not all that close to this bed last summer, but as you can see a few came up here this spring. I am going to move them and the Marigolds to the south bed this week. The Celosia spicata ‘Cramer’s Amazon’ doesn’t need to be here either. This bed is mainly for the Angelonia angustifolia hybrid Angelface® ‘Perfectly Pink’. There are also a couple of the Echinacea purpurea (Purple Coneflower) I brought home earlier in this bed. On the right is one of the clumps of Stachys byzantina (Lamb’s Ears) that has done well here. The Nandina domestica (Heavenly Bamboo) in the corner is doing well after a cold winter that I thought did it in. 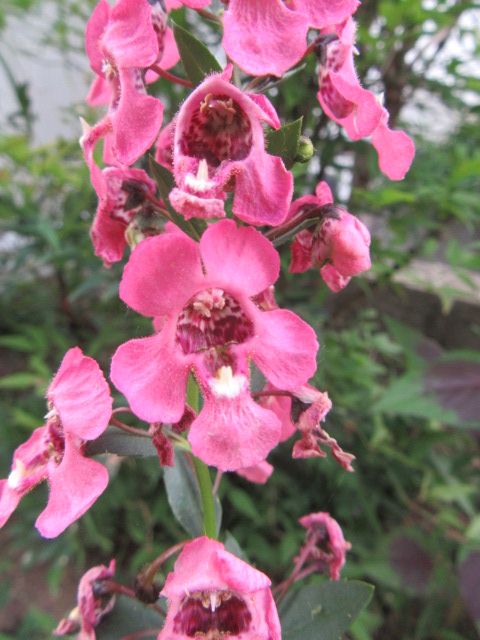 The flowers on the Angelonia ‘Perfectly Pink’ are really interesting! 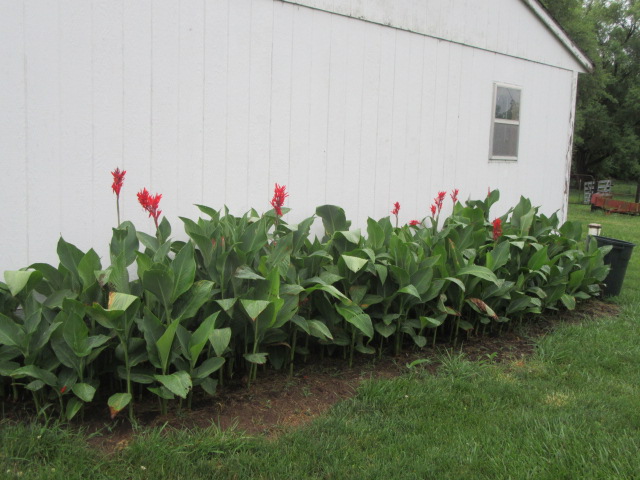 The Cannas are looking good now and I am much happier since they are spread out the entire length of the garage. They grew to 12′ tall last year but they may not grow as tall this year since I dug them all up. I put several Colocasia esculenta along the front of them but they have barely started growing. That may have been a mistake, but we shall see in time. I think they will be OK as long as I give them plenty of water.

I have a few more photos, but it’s getting late and I am about to fall asleep in my chair again. SO….

Until next time, stay well, stay positive, be thankful and GET DIRTY!!!