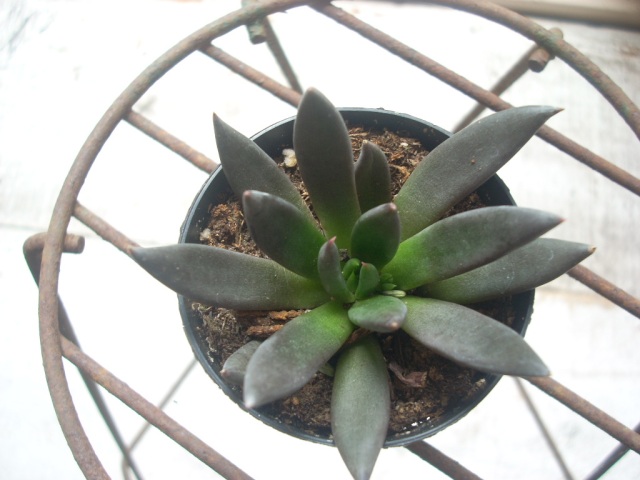 Echeveria affinis E. Walther is the correct and accepted scientific name for this species of Echeveria. It was first described by Eric Walther in the Cactus and Succulent Journal in 1958. Mr. Walther passed in 1959 leaving a vast journal of unpublished notes and plant names. It took another 13 years until it was finally published. That is why you will see many plants he named that weren’t published until 1972.

I bought my Echeveria affinis from Lowe’s or Wal-Mart on 8-25-2012. It has longer and narrower leaves than the hybrid Echeveria ‘Black Prince’.

Echeveria affinis is commonly known as the Black Echeveria…

Although this plant is a Mexican native, it’s exact origin is unknown. According to Margrit Bischofberger of the International Crassulaceae Network, the name ‘Black Knight’ is just an industry name and should not be used. This plant is a species and not a cultivar or hybrid.

“This is not a hybrid with E. affinis as one parent, but it is the species E. affinis itself, distributed as ISI 269 in 1959 as a clone somewhat different from the type species :

“This collection differs from that of the type (see the C&SJ., 30:195) in its blacker, slightly differently shaped leaves. Collected by R. J. Taylor under bushes and trees on the road between Mazatlan and Durango, Mexico. The surrounding country is mountainous, the altitude about 5000′ with rains even in summer.”

The name ‘Black Knight’ must not be used any longer, the name of the plant is Echeveria affinis.”

Information on Tropicos says the specimen collected by Mr. Walter was found growing at the Golden Gate Park in San Fransisco in 1957. Plants of the World Online says they can be found in northeast and northwest Mexico.

I sold the mansion in Mississippi to a group who did a lot of work on it and turned it into a bed and breakfast. My dad asked me to move back to the family farm in mid-Missouri so I agreed. I explained to him I had a lot of plants and he just said, “yeah”. Well, he was very hard of hearing and I don’t think he fully understood. I gave up over 200 plants but still took most of my succulents, Alocasia, and several others I couldn’t part with. It was an 8-9 hour long trip with temps in the 30’s all the way. Most of the plants made it through OK. 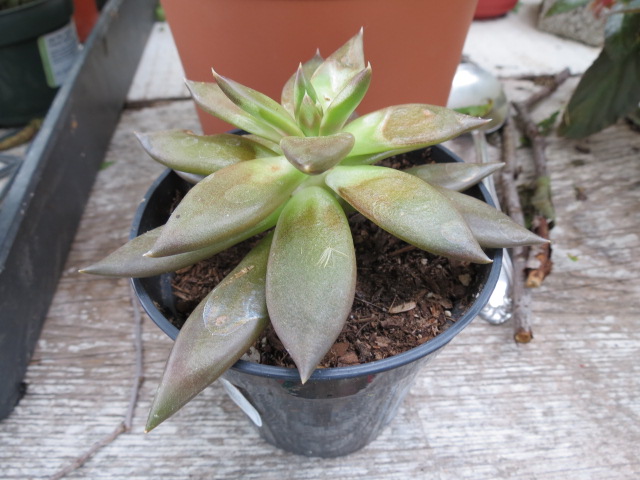 Most of the plants had to spend the remainder of the winter in the basement. Surprisingly, most of them did fine. We were all so glad when spring came so we could get outside. Something strange was happening with my Echeveria affinis. I think maybe it got too cold somewhere along the line. Maybe because of the trip, huh? 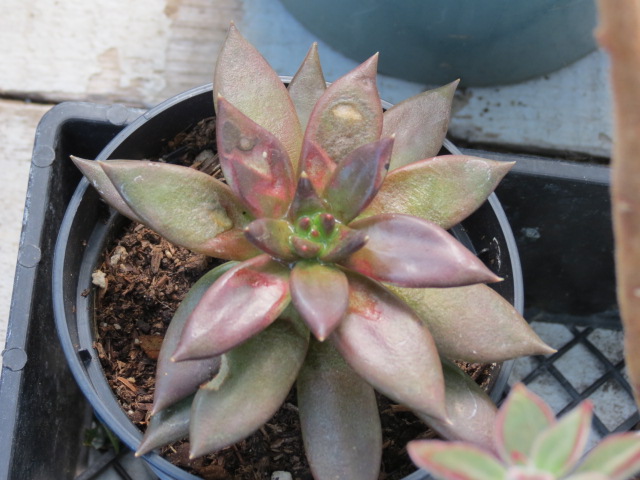 It was looking much better by the time the above photo was taken but the scarring is still visible. 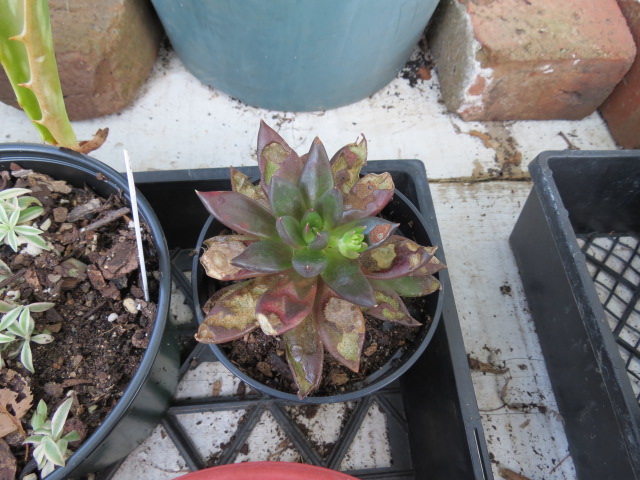 One day I went out to my plants and noticed many of the succulents had been chewed on. At first, I thought it was the grasshoppers because they were very bad. I am among my plants a lot and I had not ever seen any grasshoppers on the succulents so I thought maybe it was happening at night. That night I went out with a flashlight to see what could be doing it. Low and behold there were crickets snacking away! So, right then and there, I moved the succulents into the shed. It became a nightly ordeal of moving my succulents into the shed then moving them back outside in the morning. 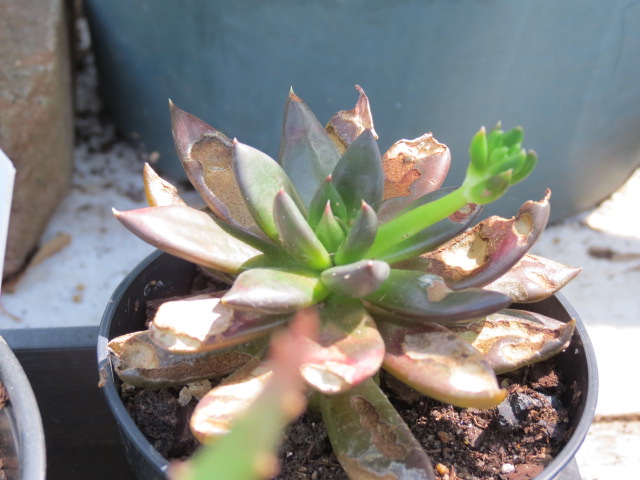 Even though the Echeveria affinis had been severely damaged, it still sent out a bud… Echeveria leaves last a long time, so I knew this plant will look bad for a while. 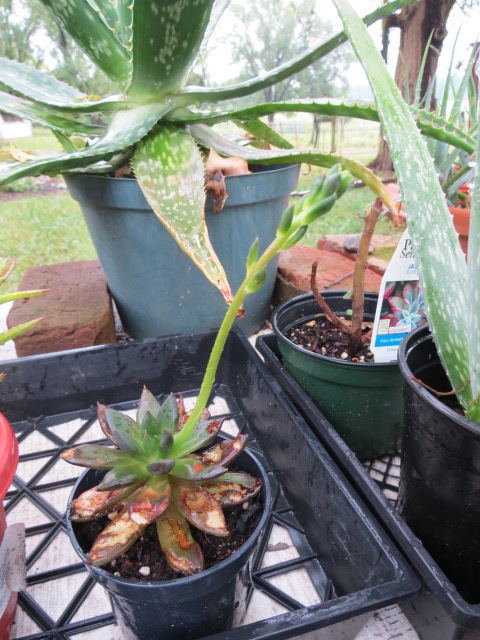 You just never know what plants go through when we are not around… While we are safely inside at night many nocturnal critters are about feeding.

It is amazing how tall this flower stem grew! Almost 20″!

Once back inside for the winter, the Echeveria affinis continued flowering. It seems the plants are like me. They are glad to be inside when it is cold outdoors, but we would rather be outside…

I know the USDA hardiness zone says 9a-10a which is down to 20-30 degrees… If your plants are in pots, bring them inside much sooner than it gets that cold. GEEZ!!! Chances are if you don’t like it, they don’t either. 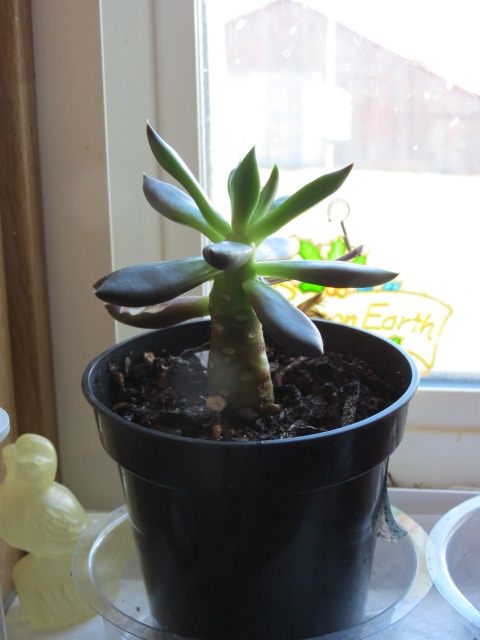 After the flower passed I moved my Echeveria affinis to the kitchen windowsill. There it received brighter morning sum from an eastern exposure. I know it looks a little weird, but this is apparently what they do especially if they aren’t enough light. Echeveria definitely need bright light or they really do get weird. A south-facing window would have been better, but the only south window was in moms bedroom. Since she passed in November 2015, I moved into her old bedroom. 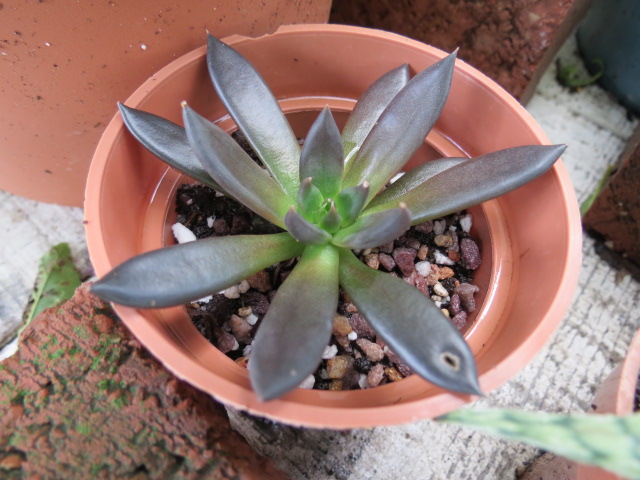 Once outside again, I cut the top portion off so it could regrow and look better. Many succulents need this done from time to time.

I didn’t say I discarded the old part. I somehow have not been able to accept throwing away plants that are still alive without feeling a bit guilty. 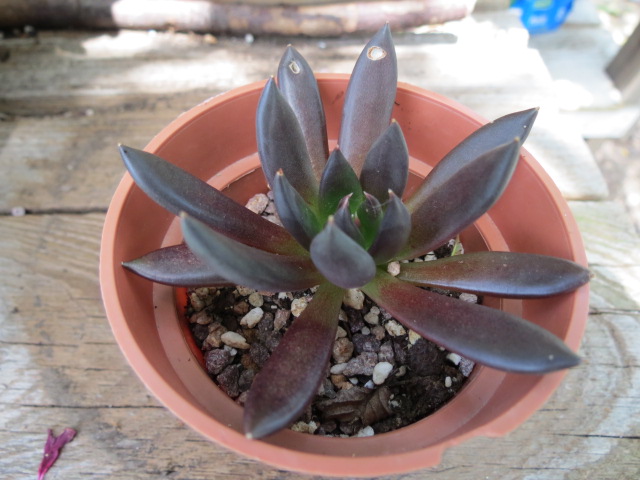 Growing succulents is very simple as long as you follow a few basic rules. One is they need a fast-draining soil. You can achieve this in several ways such as amending the potting soil with extra grit and perlite. I have been mixing 2 parts or potting soil with 1 part chicken grit and 1 part perlite. This isn’t perfect and I am “still working on it”. I think the best recipe should drain almost as fast as water is poured in while also absorbing thoroughly into the soil. You know how peat is, though. Once it dries out it is hard to get it to absorb water again. Some additives cause the soil to be harder and even less absorbent. There are some very good recipes for cactus and succulent potting soil but sometimes the ingredients aren’t readily available.

Watering can also be tricky. They need regular watering during the growing period while outside, but very little during the cooler months while inside. The dormacy table that is available online says Echeveria are winter dormant although they still do some growing. This is especially true in a warmer environment with less than adequate light. Their leaves and stems will stretch and become weird.

If you have any comments, questions or suggestions, I would like to hear from you. If you can’t think of what to say, please at least click on “like” so I will know you visited this page. For further reading, you can click on the links below.