Crassula ovata (Mill.) Druce is the correct and accepted scientific name of this species of Jade Plant. It was named and described as such by George Claridge Druce in Botanical Society and Exchange Club of the British Isles in 1917. It was FIRST documented as Cotyledon ovata by Philip Miller in Gardener’s Dictionary, 8th Edition, in 1768.

This plant and I had a long history. When I was working for Suzanne in Carson, California there were many yards with beautiful plants. Some were Jade Plants, Crassula ovata. Around the corner from her home was a home with 6′ tall Jade plants on both sides of their yard. One evening in mid-December, Suzanne had an appointment in a nearby suburb in an office building with 15-20′ tall Jade Plants all along the wall. There was a bare spot where one had been removed for some reason. In this bare spot was a branch list laying there SO, I took a couple of cuttings. We left for Mississippi a few days later and I brought these two cuttings with me in a ziplock bag in my suitcase. Not knowing any better at the time, I put the cuttings in a glass of water. Strangely enough, they rooted and didn’t rot. If I had have known then what I know now I would have put them in sand or something besides water. That was the beginning of our 5 1/2 year relationship (mmm….the Jade Plant and me).

One of the cuttings was a little smaller and just stayed small while the larger one took off like it’s life depended on it. It had an occasional brown scale, but I just picked them off with my fingernail or sometimes removed the entire leaf.

USEFUL INFORMATION:
Family: Crassulaceae
Origin: Africa
Zones: USDA zones 11-12
Height: Many websites have different sizes of this species, typically 3-6’. However, I know for fact they can grow MUCH taller because my cuttings, as I mentioned, came from a plant that was around 15’-20’ tall. They usually don’t grow much taller than 30-36” in a pot.
Light: Part shade
Water: Medium. I watered my plant just like all my other potted plants during the summer months. They shouldn’t be given much water in the winter and will tell you when they want it. Their leaves start to shrivel, making them look a little wrinkled.
Flowers: White to pink in the spring. Mine never flowered, and potted specimens apparently rarely do. 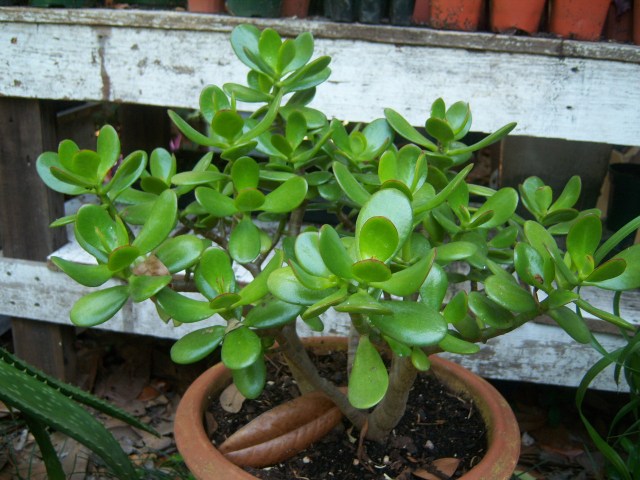 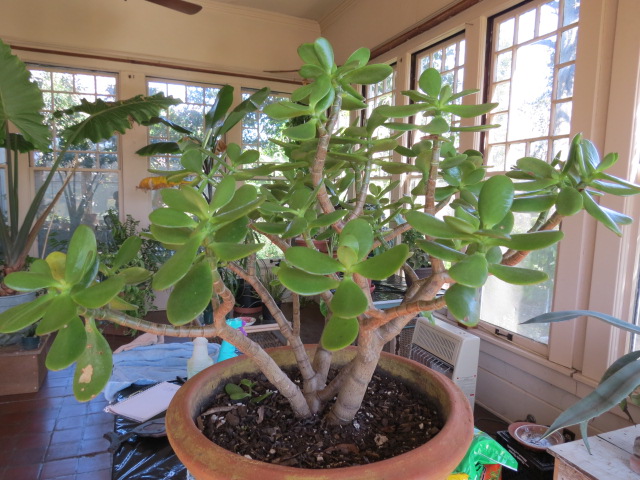 During the cooler months I kept it in the sunroom and when the temps were warm during the winter I moved it to the front porch. Then in the spring it was moved back outside in the backyard again. 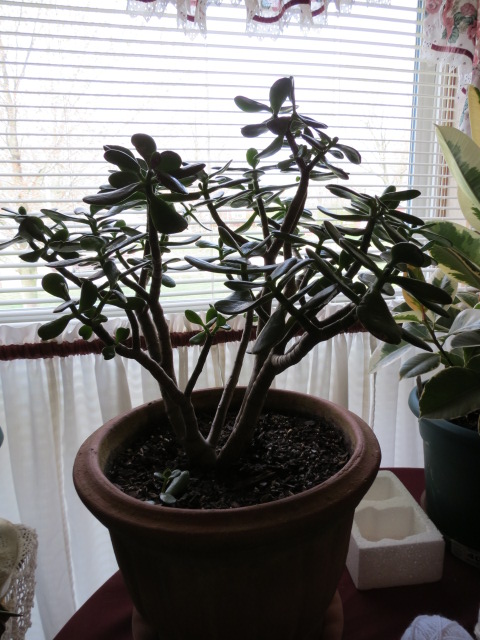 When I moved to Missouri in February 2013 I brought it with me. It stayed in my bedroom over the winter. Many of the plants I brought with me had to stay in the basement until warmer weather came. 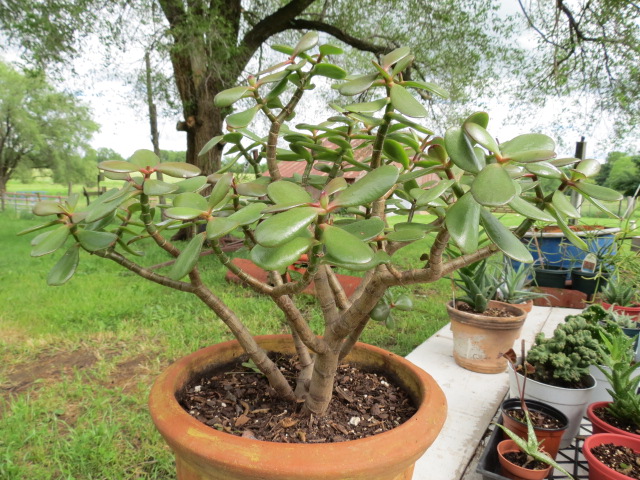 I have read where these plants can get mealybugs and spider mites. I never had any problem with them, but I did have brown scale. I would just pick them off with my fingernail. 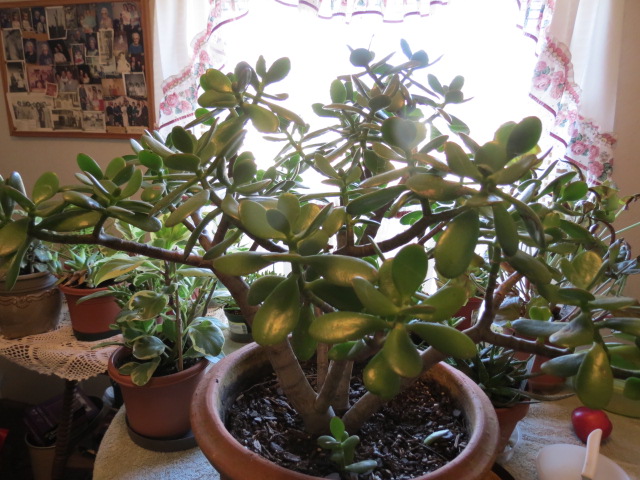 Along with most of my other plants, I gave this one up in the summer of 2014. How am I going to replace this plant? I feel like if I ever have another Crassula ovata, it will never be like this one because the sentimental value alone is something that can’t be replaced. I followed someone’s advice when I shouldn’t have and that will NOT happen again… I am not saying that I won’t give up my plants again because that could happen. BUT, there will be a MUCH better reason with a brighter future ahead. Well, I can’t go back and change what has been done. I will just look forward to the day when I have a new Crassula ovata. Maybe I can slip off to that office building in California and take another cutting.