I was given this plant by the owner of Pleasant Acres Nursery in Leland, Mississippi in May of 2012. We traded a lot of plants. Anyway, the plant was from Proven Winners and it said it was an Aloe ‘Twilight Zone’

I have been calling this plant Aloe x ‘Twilight Zone’ since 2012 because that’s what the label said. When making an update for this page in June (2018), I noticed The National Gardening Association said it was x Gasteraloe ’Twilight Zone’ instead of Aloe x ’Twilight Zone’. I contacted the creator, Kelly Griffin, and told him I was updating my blog about the Aloe ‘Twilight Zone’ and a few websites were calling it an x Gasteraloe cultivar. I told him I wanted to make sure the information on my blog was correct His reply was…

”Didn’t see this but it is and has always been a Gasteria crossed with an Aloe so you understand that most people when labeling wouldn’t know the difference but if it is labeled as an Aloe, it is incorrect.”

Then I asked if he could tell me the species used in the cross. His reply was…

“It was a hybrid that I made long ago. More than a decade. It is an Aloe haworthiodes hybrid crossed with a Gasteria carinata form. It is largely sterile and only occasionally has it made a seed pod which so far nothing has come from.  I named it for the intro to Rod Sterling’s Twilight Zone with the floating stars coming at you like driving in a snow storm. Old black and white tv show was classic!”

So, there you have it straight from the creator of x Gasteraloe ‘Twilight Zone’. Many in the industry mislabeling another plant…

Kelly Griffin works for Altman Plants. He is one of the foremost Aloe hybridizers today and you can watch a few videos showing his AWESOME yard on YouTube. 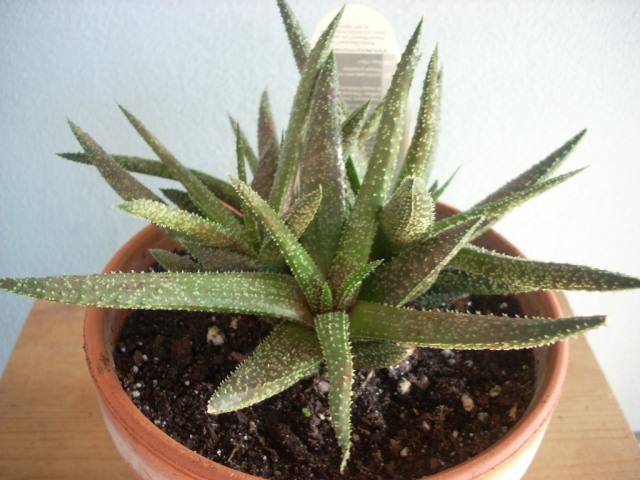 I really liked this Aloe hybrid because of its dark green leaves covered with tiny white spines. The leaves are very rough and feel like tiny needles. 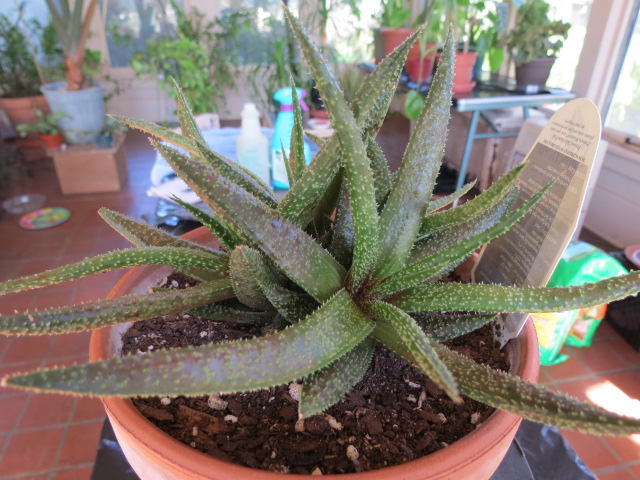 As temperatures started cooling down, I moved my plants into the sunrooms and other rooms in the mansion. If the day was warmer during the winter, I would move them to the 40′ wide front porch then back inside in the evening if it was going to be cold at night. The neighbors must have thought I was crazy.

I moved back to the family farm in mid-Missouri in February 2013. I brought my x Gasteraloe ‘Twilight Zone’ with me as well as most of my succulents. I had to give away several hundred pots and making decisions about what to take and leave behind was tough. I had an awesome backyard and 5 sunrooms at the mansion but I knew I would not have that privilege back home in Missouri.

Back outside once again but this time in a totally new environment. 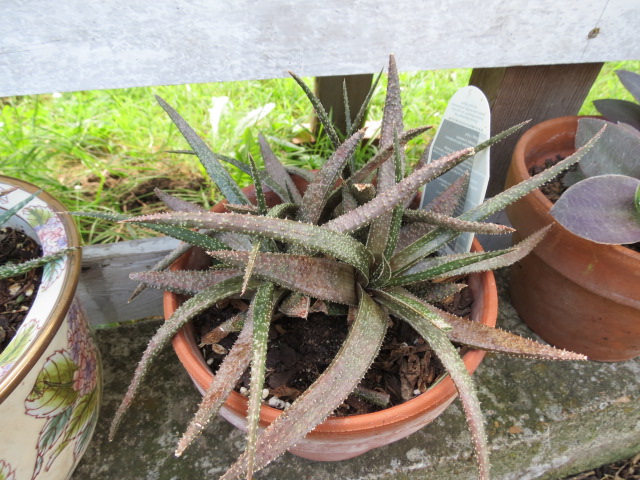 As with all Aloe, they need a well-draining soil. When grown in pots, they need a soil that absorbs and drains quickly. Even though they are drought tolerant and require little water if grown in the ground, pot growing is somewhat different. Aloe are summer dormant which means most of their growth occurs in early spring through early summer and again in late summer through fall.

I started noticing that many of the succulents had been chewed on. At first, I thought it was grasshoppers because they were very bad in 2013. Strangely, though, I never noticed grasshoppers on my succulents when I was working with them during the day. So, I went outside during the night with a flashlight and was SHOCKED to see many crickets munching away on several of my succulents. Right then and there I started moving them into the shed. I continued moving them into the shed every evening until the end of the summer. 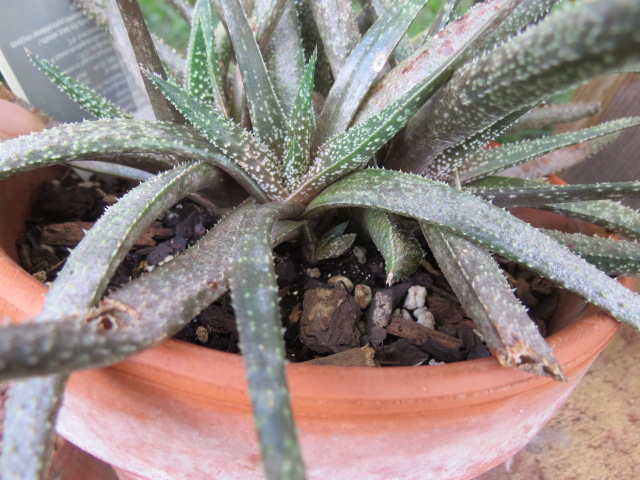 During their growing period, they should be watered on a regular basis if there was no rain. Even though many succulents are dormant during the hotter months of the summer, I still went over them each time I watered my potted plants. I watered my succulents very sparingly during the winter while inside.

Many Aloe collectors grow their plants in full sun but I prefer morning sun and light shade the rest of the day. In Mississippi, they received a good amount of sun until about noon when they were shaded by the huge magnolia tree and the mansion the rest of the day. Here is much different. They get a little morning sun and the rest of the day they have light shade from being under an old Chinese Elm. As summer progresses and the beetles chew on the leaves of the tree, more light shines through. It works out pretty well even though I don’t care for the beetles. 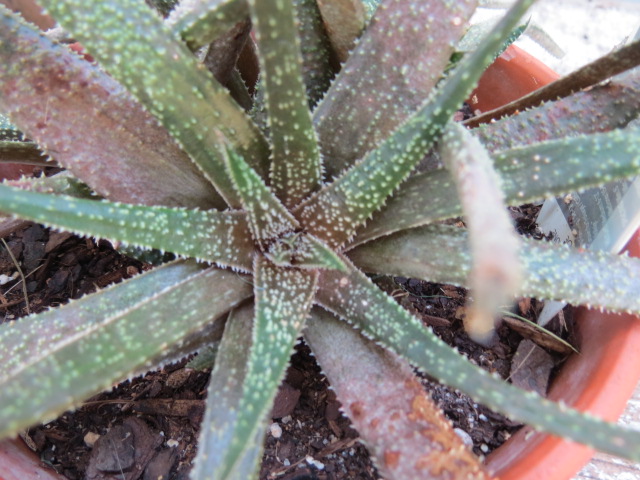 Some plants look really neat from the top.

Inside for the winter once again. I put most of my succulents on a table in the front bedroom. It was a west exposure so they received a good amount of afternoon sun and the room would sometimes get quite warm. That is not really a good combination for some succulents as they should be slowing down. It caused many succulents leaves to stretch.

I really enjoyed growing the x Gasteraloe ‘Twilight Zone’ but I am not sure about the leaves turning brown. It appears almost like the plant is sick. 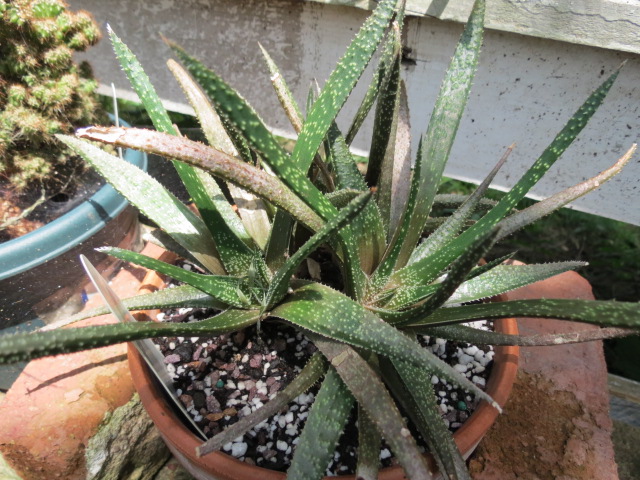 I really liked the x Gasteraloe ‘Twilight Zone’ but unfortunately I gave it up with most of my plants shortly after the above photo was taken. Now I am rebuilding my collection and hopefully, I will run across another one someday. They are available online, but I prefer to buy most of my plants in person.

I hope you enjoyed this page and maybe found it useful. If you have any comments, questions or suggestions, I would like to hear from you. Please click on “like” if you visited this page. It helps us bloggers stay motivated. 🙂 You can check out the links below for further reading. There isn’t much online about this plant, but hopefully the links will help you a little.