Pilea microphylla (L.) Liebm. is the accepted scientific name of this plant. It was documented as such by Frederik Michael Liebmann in Kongelige Danske Videnskabernes Selskabs Skrifter, Naturvidenskabeli Mathematisk Afdeling in 1851. It was first named Parietaria microphylla by Carl von Linnaeus and documented as such in Systema Naturae in 1759.

The genus, Pilea Lindl., was named and described by John Lindley in Collectanea Botanica in 1821.

As of 12-19-21 when this page was last updated, Plants of the World Online lists 604 species in the Pilea genus. It is a member of the plant family Urticaceae with 57 genera. Those numbers could change as updates are made on POWO.

I bought my first Pilea microphylla from Wagler’s Greenhouse in 2014 and my second in 2016. I think they are a neat plant with a tree-like appearance. 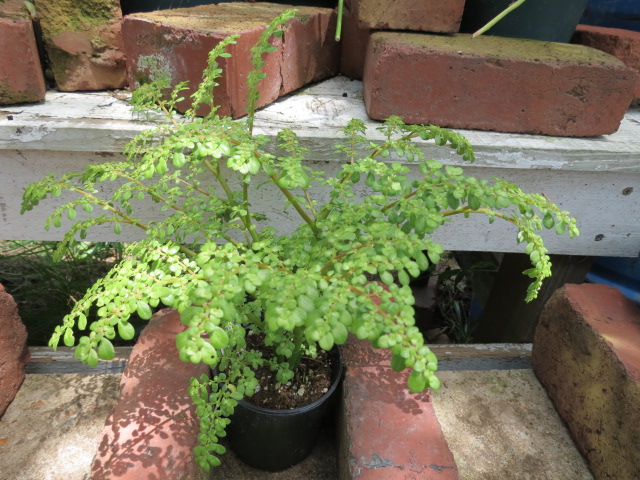 The Artillery Plant is very easy to grow in pots with a peat-based potting mix such as Miracle Grow. They do best in part shade or bright indirect light. Too much afternoon sun is not good. They can be grown inside in the winter, but they appreciate high humidity so occasional misting is appreciated. Placing their pot in something with a bed of wet pebbles is a good idea.

The leaves are very tiny and the strange little green flowers grow all along the stem. The male flowers explode to discharge their pollen which is where the name Artillery Plant comes from.

It is considered an invasive species in many countries…

I really enjoy growing this carefree plant. I never had any problems with insects or anything. SO, I would recommend it if you want a small, tidy little plant. 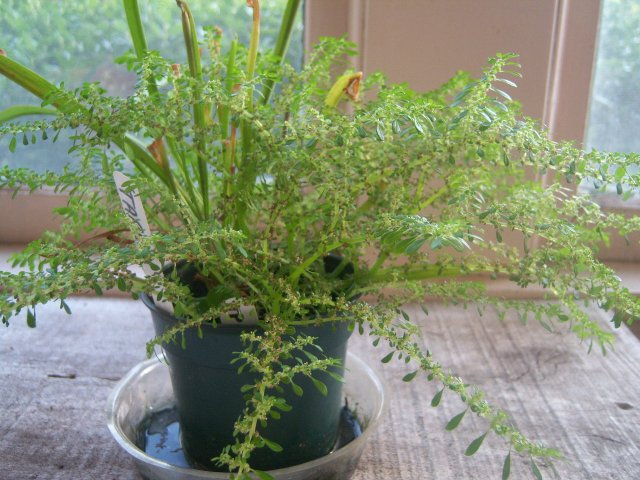 I almost forgot to mention my first encounter with the Artillery Plant. I had bought a couple of Pitcher Plants from Wellspring Gardens in 2009 and after a couple of years this strange plant came up in the pot. I didn’t know what it was until I bought one from Wagler’s. Then I remembered it was the same plant that had grown in the pot with the Pitcher Plant.