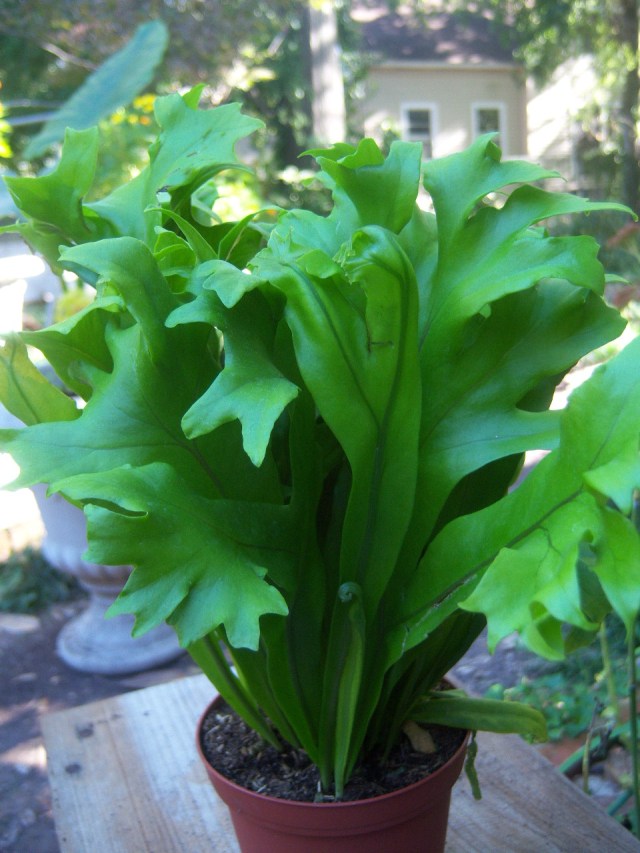 Microsorum punctatum (L.) Copel. is the correct and accepted scientific name for this species of Microsorum. It was named and described as such by Edwin Bingham Copeland in University of California Publications in Botany in 1929. It was first named and described as Acrostichum punctatum by Carl von Linnaeus in the second volume of the first edition of Species Plantarum in 1753.

Now a synonym, Polypodium punctatum (L.) Sw. was the last name I had this plant listed as. This is the species this plant is commonly sold as at garden centers and online. It was described as such by Olof Peter Swartz in Journal für die Botanik in 1800 and 1801 which appears to be invalid. He again published the name and description in the same publication in 1802. I am really kind of confused about all that… Anyway, POWO has the link to the invalid name in IPNI and not the one that wasn’t validly published. Doesn’t matter, I suppose, since the Polypodium punctatum (L.) Sw. is a synonym anyway.

The genus, Microsorum Link, was named and described by Johann Heinrich Friedrich Link in Hortus Regius Botanicus Berolinensis in 1833.

Plants of the World Online currently list 56 species in the Microsorum genus (as of 2-13-21 when I last updated this page. It is a member of the plant family Polypodiaceae with 65 genera. Those numbers could change as updates are made Iand likely will).

I am not sure when the “last” official name change took place, but this species has flopped around mainly between Microsorum punctatum (L.) Copel. and Polypodium punctatum (L.) Sw. It is still commonly sold at garden centers under the name Polypodium punctatum AND Polypodium grandiceps. I have switched the names back and forth several times… Usually, every time I update this page it is different. Polypodium grandiceps is somehow an “unplaced” name… Ummm… From 1888. Somehow the species name became a cultivar name. Very good!

To make matters more confusing, there is a Wikipedia page that says Polypodium punctatum is a synonym of Hypolepis punctata. The caption under the photo even says Hypolepis punctata ‘Grandiceps’… WELL, that is a shocker, huh? The problem is… Polypodium punctatum Thumb. IS a synonym of Hypolepis punctata (Thunb.) Mett. but the photo and caption on the Wikipedia page is COMPLETELY wrong… You can see the Wikipedia page HERE. You have to pay attention to the author’s name. The information on the right side of the article is correct. Whoever wrote this page was misinformed which is a problem when several species were given the same scientific name by different authors… I contacted the author of the page to let him know the photo was wrong. Now, lets see how long it takes for him to correct it… 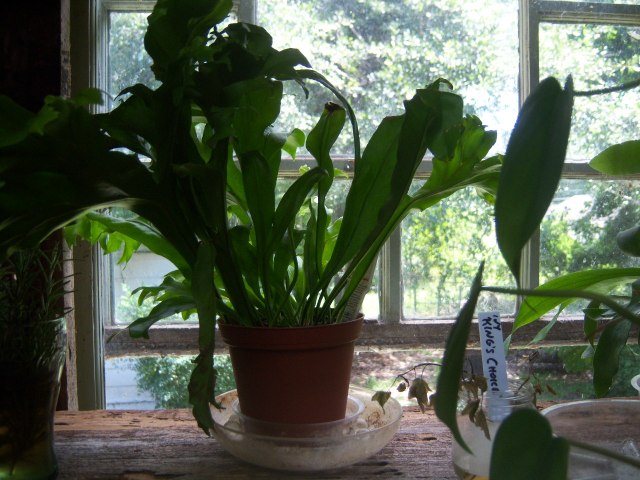 Microsorum punctatum ‘Grandiceps’-Elkhorn Fern on the Cypress shelf in the kitchen at the mansion on 7-2-12, #105-6.

I brought my Dwarf Elkhorn Fern home from Lowe’s in Greenville, Mississippi in October 2011. I was living at the mansion in Leland at the time and was enjoying collecting plants. I am not sure how many times I have changed the scientific name of this plant… 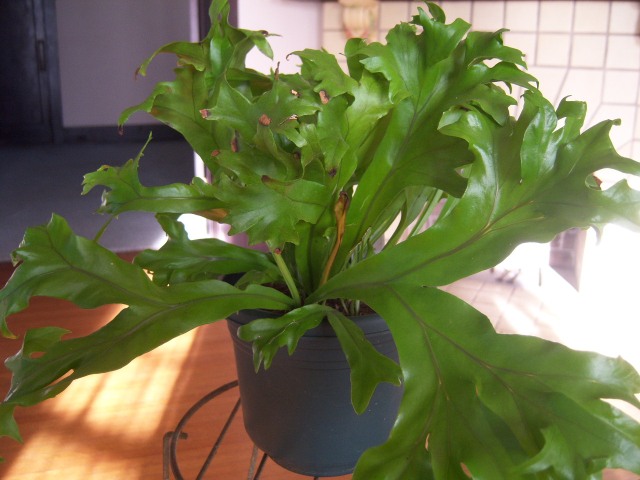 There isn’t much online about caring for this species. I kept my Elkhorn Fern, or whatever you choose to call it, on the cypress shelf I made in the kitchen at the mansion beside the Staghorn Fern. I cared for them both the same way as they have similar requirements. They received morning sun and shade the rest of the day. I saved rainwater especially for my Elkhorn and Staghorn Fern and normally immersed their pots in a bowl of water whenever they needed it. Their soil should not dry out completely. They prefer dappled shade to part shade and their leaves will burn if in too much sun. I  didn’t take them outside during the summer like most of the other plants.

I had no problems with this fern but I gave it to a good friend of mine when I moved back to the family farm in mid-Missouri in February 2013. Someday I will bring home another Elkhorn Fern when I have adequate conditions.