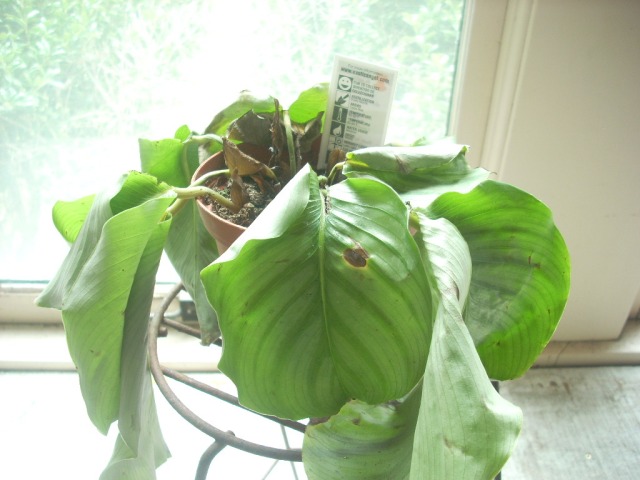 Commonly sold by the name of Calathea ornata. There are MANY popular species and cultivars.

Goeppertia ornata (Lindl.) Borchs. & S. Suárez is now the correct and accepted name for this plant. It was named and described by Finn Borchsenius and Stella Suárez in Systematic Botany in 2012. It was first named Maranta ornata by John Lindley and described in Flore des Serres et des Jardins de l’Europe in 1848.

The genus was named after Johann Heinrich Robert Göppert. He was a German botanist and paleontologist.

The Goeppertia genus was first named and described by Christian Gottfried Daniel Nees von Esenbeck in Linnaea in 1831. SO, the genus is not new… According to Plants of the World Online, there are now 243 accepted species in the Goeppertia genus after being resurrected in 2012 (I think). The latest edition of The Plant List (2013) still listed Calathea ornata as the accepted name.

Members of the genus are native to Mexico and much of South America. The species, Goeppertia ornata, is native to Columbia and Venezuela.

I bought this Pinstripe Plant from Lowe’s in Greenville, Mississippi while living at the mansion on August 25, 2012. It wasn’t doing so hot when I bought it from the discount rack. They always gave me good deals and the pot it was in was worth more than the plant. Honestly, I acquired a lot of nice pots that way. This plant didn’t survive long after I bought it. I think the cool, wet conditions at Lowe’s did it in before I brought it home.

I didn’t have this plant very long so I can’t give you any information about my personal experience. When I lived with my brother in Minnesota, they had a HUGE Prayer Plant, Maranta leuconeura, in a pot that was in a tuba in their sunroom. It was an awesome looking plant and did very well there.

I hope you enjoyed this page and find the links below helpful. If you have any comments, questions or suggestions, I would like to hear from you. If you visited this page, please click on the “Like” below.