This page is dedicated to the many varieties I grew without names. Most of them were given to me as cutting while a few I did buy. I have looked through hundreds of photographs online but still am stumped. Coleus is one genera of plants who’s leaves can look different depending on the light they are grown in. I have several good guesses for each one, but none I was definitely sure about.

The one in the above photo was one of my favorites. It grew in a nice molding habit and was 16 ” tall when the photo was taken on 10-12-11. I took cuttings to overwinter this variety for 2012 but during the summer the leaves started curling and turned black… It eventually died. This one was given to me as a cutting from a friend.

This one was also an outstanding unnamed Coleus. It was 30″ tall when the above photo was taken on 10-12-11. I overwintered cuttings of this one for several years. This one was given to me as a cutting from a friend.

This Coleus was AWESOME!!! There are several cultivars on the internet that are very close and it is highly possible it was part of the Wizard series. The photos of “Wizard Mix” shows a Coleus just like this one… This one was given to me as a cutting from a friend.

This one’s leaves were all different making it very interesting. It grew fairly tall and and upright. I don’t think it produced any flowers until very late. This one was given to me as a cutting from a friend.

I really liked this one. I figured one with this leaf pattern and color would be easy to identify online. But, no, I couldn’t find it. One day I will have to look again. This Coleus was 16 inches tall when this photo was taken on 10-11-11. It was given to me as a cutting from a friend. Actually, most of the Coleus on this page were from her in 2011. She dropped by on her way home from Lowe’s in Greenville and gave me cutting of all the Coleus she had bought…

This one kind of looks like a couple of cultivars such as ‘Mosaic’ BUT not really 100%. Looks a lot like ‘Electric Lime” with chocolate spilled on it. Ummm, she gave me this as a cutting, too.

This one was one of the smaller-leaved training types. Id did good, but I just wasn’t really impressed with it. It was given to me as a cutting from a friend in 2010.

This Coleus kind of resembles #6 but they are not the same plant. It was given to me as a cutting, too. Umm… I am wondering now if #6 and #8 are the same plant… 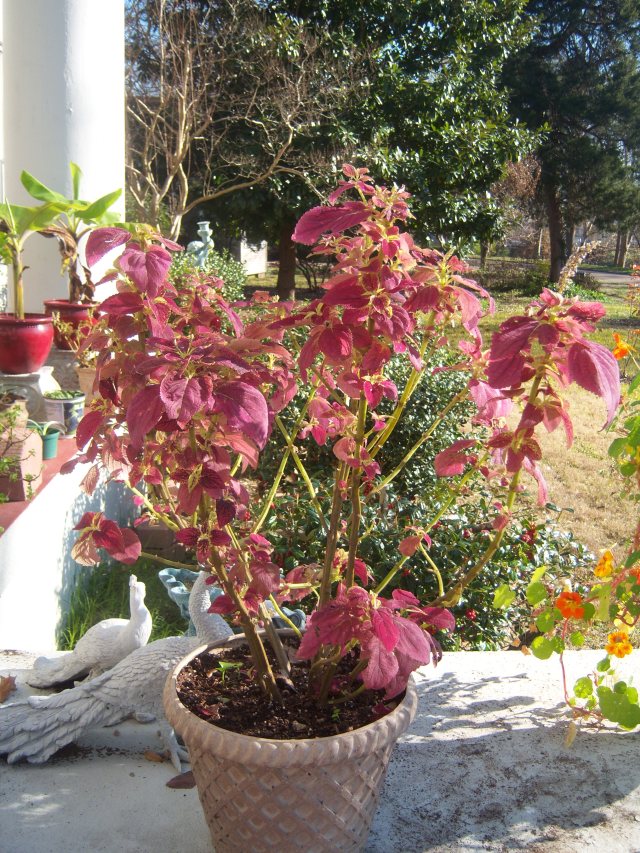 One of my neighbors had several pretty nice flower beds. In 2009 the had these two HUGE plants she gave me in December. They were 30″ tall! I should have just taken cuttings because they didn’t make it through the winter.

Umm… I am not sure where I bought this one in 2014. Maybe Harrison Greenhouse. He decided to retire a couple of years ago. This Coleus didn’t grow very large and was consumed by one of the taller ones, which leads me to Unnamed Coleus #11.. 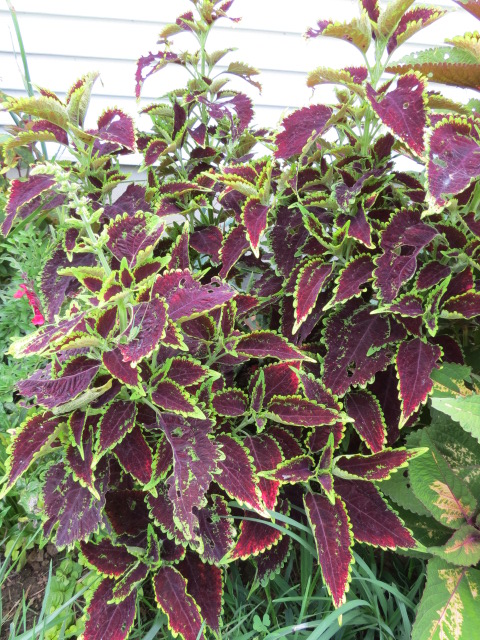 I had bought 3 unnamed Coleus, I think, from Harrison’s in 2014. Anyway, there were 3 Coleus in the north bed. Two of them grew very tall and bushy. 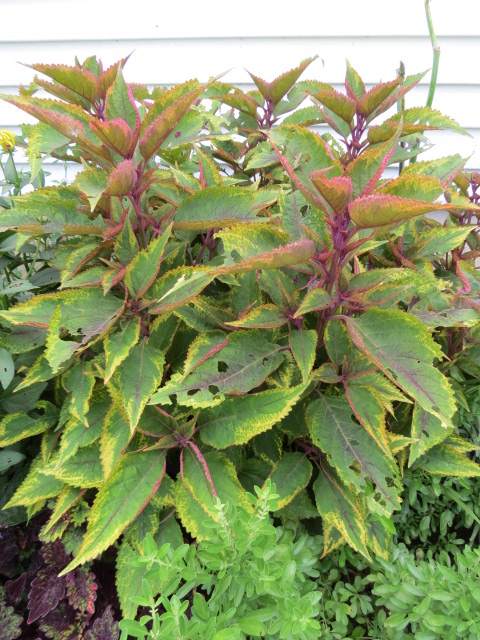 This is the other one from Harrison’s that grew really big. You can see Unnamed #10 in the bottom left corner. I have 13 unnamed Coleus in the folders, but 12 & 13 turned out to be the same plant.

As I said, there are many photos on the internet to help you figure out what the name of your plants are but you have to consider the following:

1-The amount of sun your plants were growing in compared to the ones in the photos. Coleus leaves can be darker, brighter, etc. depending on their light and the time of the year (early vs. late in the season), etc.

2-The year you purchased your plants compared to the date the photos online were taken. Coleus plants available in garden centers from year to year are normally new releases or within a few years of being released. SO, if you have one you bought this year and it looks like a photo online that was taken 10-15 years ago… Chances are they will not be the same cultivars. Check websites from Ball FloraPlant, Proven Winners, Athena Brazil, etc. to see what was new from them. I will add new sources as I think of them.

Besides all the photos online you can see by clicking on “images”, there are several companies such as Rosy Dawn Gardens that are Coleus specialists. Glasshouse Works, and Coleus Central (International Coleus Society) are a few other good websites. Dave’s Garden also has lots of photos.