Desmodium paniculatum (L.) DC. is the correct and accepted name for this species of Desmodium. It was named and described as such by Augustin Pyramus de Candolle in Prodromus Systematis Naturalis Regni Vegetabilis in 1825. It was first named and described as Hedysarum paniculatum by Carl von Linnaeus in the second volume of the first edition of Species Plantarum in 1753.

Desmodium perplexum B.G.Schub. is the other possibility for this species of Tick Trefoil. It was named and described as such by Bernice Giduz Schubert in Rhodora in 1950.

The genus, Desmodium Desv., was named and described as such by Nicaise Auguste Desvaux in Journal de Botanique in 1813.

Plants of the World Online lists 184 accepted species in the Desmodium genus (as of 5-11-21 when I last updated this page). Desmodium is a member of the plant family Fabaceae family along with 767 genera. Those numbers could change as updates are made on POWO (and likely will).

Distribution map for Desmodium paniculatum from the USDA Plants Database. Published on the internet at https://plants.sc.egov.usda.gov/home. Retrieved on May 11, 2021.

The above map for Desmodium paniculatum is from the USDA Plants Database. The map on Plants of the World Online was not up to date… They use data for North America from Flora of North America and that site does not have the plant family Fabaceae included yet. POWO is supposed to start using data from the USDA for families not included in FNA later in 2021.

The map on iNaturalist shows where members have made observations. Anyone can join and it is a great website to confirm and share your observations.

Species identification is difficult and often depends on close analysis of the seedpods. The plants in this genus vary, with habits ranging from prostrate (lying on the ground) to erect stems. Flowers are usually in terminal racemes; pink, violet, or white; having the characteristic form of pea flowers. The blooming period is July–September, varying depending on species. Leaves are alternate, 3-divided, varying in shape and length of petiole, the lateral (side) leaflets usually on very short stems with the center leaflet on a longer stem. Fruit in distinct papery pods, which break up into 1-seeded segments that are dispersed by animals, including people.

THERE ARE SEVERAL LINKS AT THE BOTTOM OF THE PAGE FOR FURTHER READING AND BETTER POSITIVE ID.

Desmodium paniculatum, and its relatives, appear to be a nice plant when flowering. However, when they go to seed they are definitely one you love to hate. So many times while walking through vegetation to take photos at the end of summer I have been bombarded with their seed stuck to my pants and boots. I originally thought they were Desmodium perplexum (Perplexing Tick Trefoil) but mainly because I couldn’t tell the difference between the two. So, I suppose I was perplexed… How sure am I that it is D. paniculatum instead of D. perplexum? Not 100%. I will no doubt have to change back to D. perplexum…

Steyermark’s Flora of Missouri (Volume 3) lists 17 species of Desmodium in Missouri, 8 of which have been identified in Pettis and Henry Counties. I include Henry County because it is across the street. Johnson and Benton Counties are also fairly close. Of the eight species that “could” grow on my farm, they are likely either D. paniculatum or D. perplexum. Information suggests several species, including D. perplexum, are part of the Desmodium paniculatum Complex. To make identifying several species more difficult, it is believed that several species have hybridized…

All species of Desmodium, in Missouri at least, have similar flowers. The flowers of some species are said to be larger and may have other special distinguishing features. I am not going to get into all the “technical” botanical terminology. There are several links below that provide that information.

Probably the worse thing about Desmodium species is their velcro-like seed pods. I have learned to avoid walking into areas where I could come out plastered…

I usually wind up having them on my pants anyway. 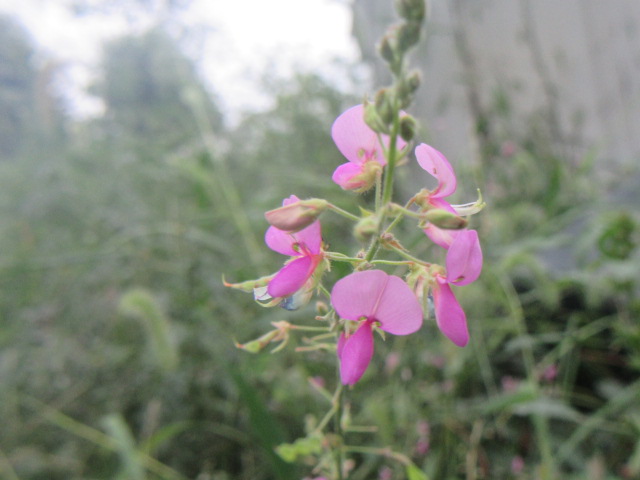 I read where Desmodium paniculatum flowers have a floral scent but D. perplexum has no scent. Hmmm… I will have to give the flowers a whiff in 2021.

Well, these leaves look more elongated like D. paniculatum. Maybe I have both species…

Hmmm… After trying to figure out the correct ID this species here for several years, switching from one to another, I am still somewhat confused. The drag and drop feature to help ID plants on iNaturalist suggests D. perplexum… Then, when I uploaded the above photo it just said Desmodium. The first suggestion was D. paniculatum and perplexum wasn’t on the list… I added observations for three dates, so we’ll see what other members have to say. I may have to change the captions and other information once AGAIN…

NOTE: The figures may not match on these websites. It depends on when and how they make updates and when their sources make updates (and if they update their sources or even read what they say). Some websites have hundreds and even many thousands of species to keep up with. Accepted scientific names change periodically and it can be hard to keep with as well. Some of the links may use a name that is a synonym on other sites. In my opinion, Plants of the World Online by Kew is the most reliable and up-to-date plant database and they make updates on a regular basis. I make updates “at least” once a year and when I write new pages or add new photos but I do get behind. We are all a work in progress. 🙂