Sedum adolphi Raym.-Hamet is the correct and accepted name for this species of Sedum. It was named and described by Raymond-Hamet in Notizblatt des Botanischen Gartens und Museums zu Berlin in 1912.

This species is commonly sold under the name Sedum nussbaumerianum which is a synonym of Sedum adolphii. It was named and described by Friedrich August Georg Bitter in Notizblatt des Botanischen Gartens und Museums zu Berlin in 1923.

Many websites and databases spell Sedum adolphi with two “i’s”, which I did incorrectly for many years. IPNI (International Plant Names Index) shows one “I”.

The genus, Sedum L., was named and described as such by Carl von Linnaeus in the first edition of Species Plantarum in 1753.

Plants of the World Online by Kew lists 461 accepted species of Sedum (as of 9-7-21 when I last updated this page). It is a member of the plant family Crassulaceae with 36 genera. Those numbers could change as updates are made on POWO.

I bought my first Sedum adolphi from Lowe’s or Wal-Mart in Greenville, Mississippi in 2012 while I was living at the mansion in Leland. I bought several other succulents including a very similar Sedum nussbaumerianum (Copper Stonecrop) which turned out to be the same thing…

I always liked Sedum and living at the mansion in Mississippi allowed me a chance to try so many. There were several sunrooms where I could overwinter plants inside that weren’t cold-hardy there. The Sedum adolphi is definitely the brightest Sedum I have ever grown.

*There are a lot of potting soil recipes online and many people develop their own with experience and what is readily available. Read the ingredients on the bag and always start with a base of a reliable brand name potting soil. I always use either Miracle Grow or Schultz Potting soil because I can buy it in large bags. They also offer cactus soil in smaller bags with similar ingredients. I used 2 parts potting soil with 1 part additional pumice and 1 part chicken grit. After reading that cactus and succulent enthusiasts were recommending pumice in place of perlite and grit, I decided to try. So, since late in 2018 I purchased a bag of pumice online from General Pumice. I have been using a combination of about 50% potting soil and 50% pumice with favorable results.

When I moved back to the family farm in mid-Missouri in February 2013, I had to give up several hundred plants. I did bring most of my succulents and many other plants including this Sedum adolphii.

All Sedums require well-draining soil. Sedum grown in pots can be placed in potting soil that you may want to amend with additional grit (chicken grit) and pumice or perlite. Many cactus and succulent growers recommend pumice over perlite but I couldn’t find it locally so I used perlite.

It was very good to see the Sedum adolphi had a new offset. Many times I don’t notice what the plants are doing until I take photos. It is easy to get busy doing other things on the farm, the garden, and flower beds and take for granted the potted plants are fine.

Sedums do very well in full sun to light shade. Some even do just fine in more shade. My Sedum adolphi was on a table behind the shed where it received a good amount of morning sun then part to light shade after that.

I always give my cactus and succulents water at the same time as the other potted plants although I usually just lightly go over them. I only water them once in a while they are inside for the winter.

The Sedum adolphi grew a lot over the summer of 2013 for sure. Once temps started getting too cool for them to be outside in October I had to bring the potted plants inside. 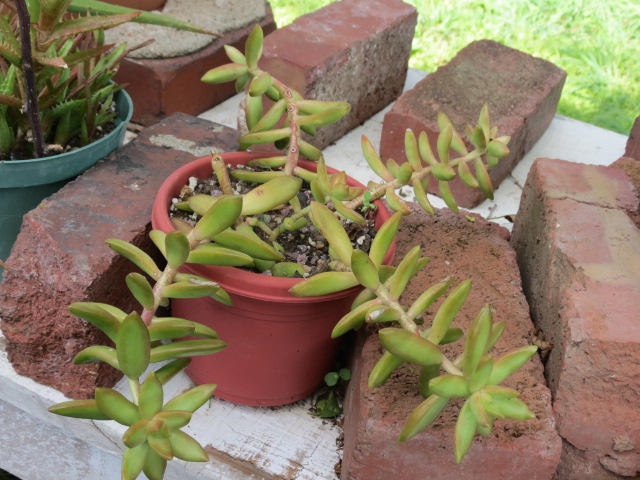 Back outside for the summer in the same area as in 2013. 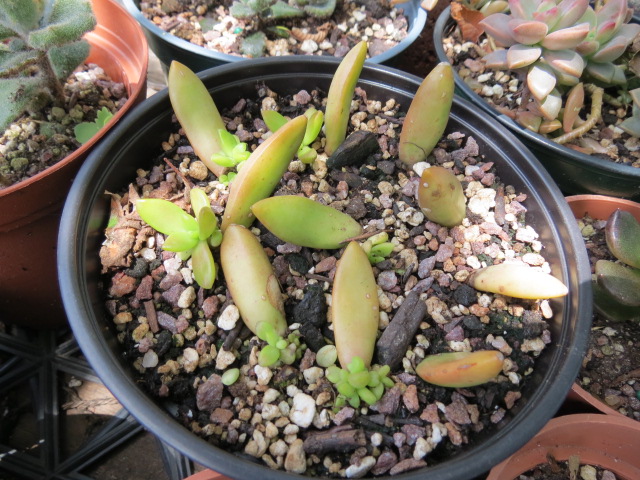 Sedum are easily propagated leaf and stem cutting and by division. It is best to make divisions in the spring for plants grown in the ground so their roots can become established well by fall.

I gave up most of my plants after the above photo was taken in 2014 then I had to start over again.

I found another Sedum adolphi in 2016. For some reason, I didn’t manage it well but it survived the neglect… I’m not sure why I kept overlooking this plant. I kept telling it I knew it needed some work but I didn’t…

It survived the winter inside and I promised it I would re-pot it if it did well during the summer. Well, it did better… 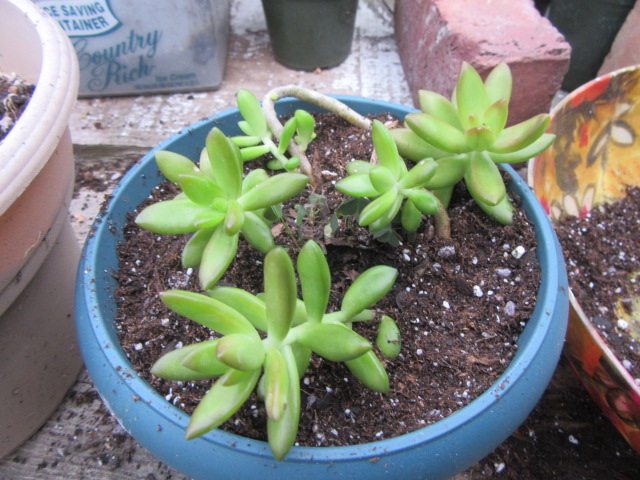 So, on August 8, I put the Sedum adolphi in a new pot. 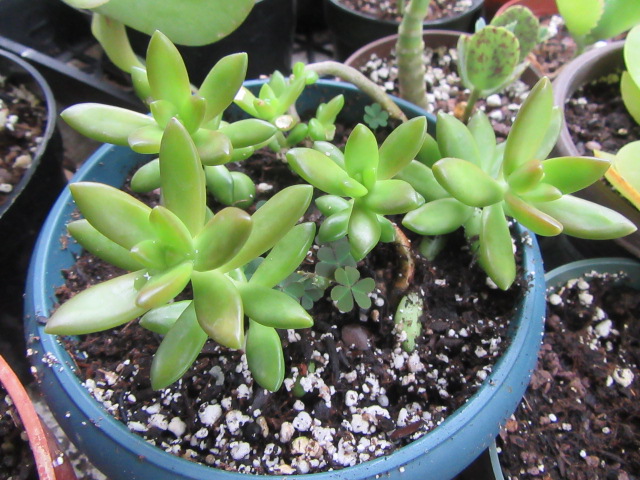 The Sedum adolphi seems to be very happy now…

Summer was over and once again I had to move the potted plants inside for the winter on October 10.

Winter was over and I was glad to be able to move the plants back outside for the summer.

I had to move the potted plants inside for the winter on October 11 because an “F” was in the forecast. All the plants did very well over the summer and Sedum adolphi was looking GREAT! Hard to believe this is the same plant was almost down to nothing in 2017.

I had to move the potted plants inside for the winter on October 15 because an “F” was in the forecast. As always, I took photographs as I moved them inside and measured the cactus and part of the succulents. I don’t usually measure Sedum adolphii because it is a sprawler. It did very well over the summer and is now inside on a shelf in front of a south-facing window for the winter. 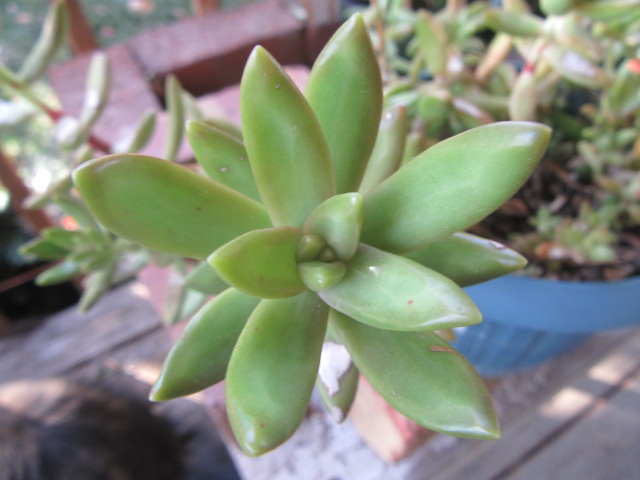 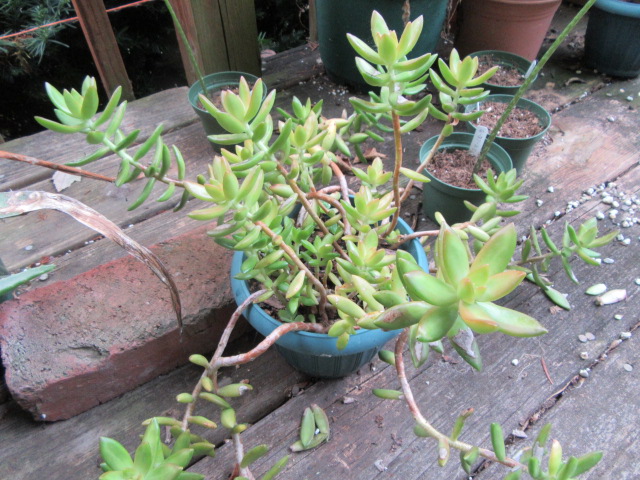 The Sedum adolphi has done fine over the summer in 2021 although it needed a little more attention. I was planning on re-growing the stems but I got busy with the garden and avoiding the heat… It will be fine over the winter inside and I can do it next spring.

Sedum adolphi is very easy to grow and does well in pots inside and out. It prefers bright light but even does OK in light shade. Water very sparingly over the winter. It is very easy to propagate from both stem and leaf cuttings. Just let the stem or leaves scab over for about 7 days before you put them in the soil to root.